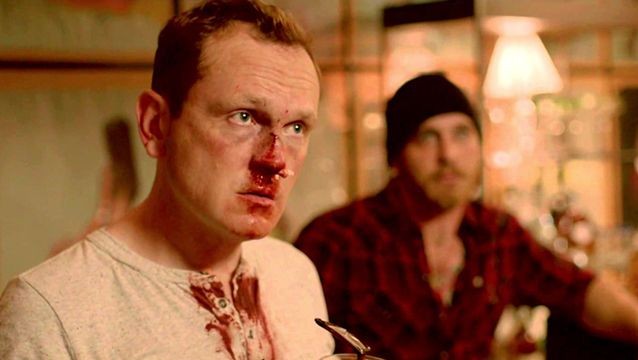 These are decisions facing Craig, a down-on-his-luck, out-of-options family man who’s about to be jobless and on the brink of eviction. When he finally does lose that job changing oil at a local garage, Craig (played by the nervy, lightning-eyed Pat Healy) runs into Vince, a childhood pal who’s also losing at life, while drinking at a local dive. War stories are swapped, personalities are revealed, and things quickly get desperate. Soon, the pair find themselves at a table with a couple celebrating a birthday — Colin (erstwhile Champ Kind, David Koechner) and birthday girl Violet (affectless, zombie-beautiful Sara Paxton) are pro forma Los Angeles assholes, a fedora-wearing older man and his blank, blonde trophy wife. But there’s something sinister about Colin and Violet, something unsettling. Like a serpent and his snake charmer. They like risk, they like to dare. Soon, Colin is offering Craig and Vince cash for these dares — first man to get a woman sitting at the bar to slap one of them across the face gets $50. They need the money, and so they seek that slap any way possible. Things grow more grim, moving from a strip club to the couple’s lavish house in the Hollywood Hills, each challenge becoming more fruitful, more terrifying. Flesh becomes expendable and a friendship starts to fray, all for the cash.

Cheap Thrills is the first feature-length film from E.L Katz, the former horror movie journalist. Katz takes this small, intimate exercise to extremes, shooting right in his actors’ (bloodied, vomit-caked) faces, unflinching against all grimness. (It’s available on iTunes and VOD, playing L.A. and Austin, and opens in more cities this Friday.) Healy is a geek-lord leading man, adding to his creeps résumé alongside 2012’s Compliance and 2011’s The Innkeepers. Vince may look familiar too — as I watched the movie this weekend, I resisted looking up who played the part, searching my brain bank for the answer. I failed. That’s because Craig’s burly pal is played by Ethan Embry, the goofball lead of Can’t Hardly Wait. Only Embry is almost unrecognizable; older and bearded and thick-shouldered now, he’s no longer the droopy teen mope from the ’90s. He’s fantastically vicious. The growing rivalry between Embry and Healy’s characters, stoked by the moneyed and remorseless Colin and Violet, is meant to be a morality play — a burlesque about what haves can do to have-nots. It’s like The Most Dangerous Game, on the smallest possible stage.

And it’s a genre movie with no genre. Which makes sense, considering it comes from Drafthouse Films, the distribution imprint of Alamo Drafthouse Cinema, the much-fetishized Austin theater chain that is slowly opening outposts all over the country. In just a few years, Drafthouse Films has become a dependable home for resurrecting brilliant, odd artifacts of freak-out cinema — last year it delivered the Australian outback saga from 1971, Wake in Fright, and the indecipherable 1987 rock-ninja conflagration, Miami Connection; earlier this year, it conjured the lost 1979 sci-fi disasterpiece, The Visitor. Drafthouse also develops and purchases new films like Cheap Thrills and Ben Wheatley’s A Field in England. It’s also the group that brought the lauded and mind-bending Oscar-nominated documentary The Act of Killing to theaters. It is a brand that is unencumbered by industry expectation; uniform, but unpredictable. They’re gonzo travelers while Hollywood matriculates at their safety school. The stakes may be low, but like the characters of Cheap Thrills, they know how to get into trouble.

Hand Job: The Intermittent Joy (and Significant Tedium) of ‘Muppets Most Wanted’