‘Hard Knocks: Houston Texans’: Clowney Is Back, a QB1 Is Named, and NASA Is Real 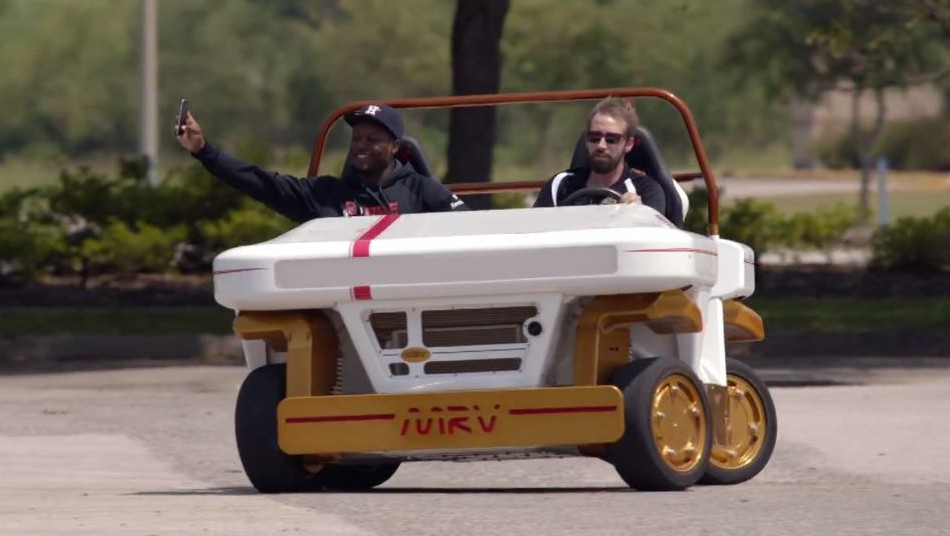 Some things that happened last night in Episode 3:

The First Casualty of the Series 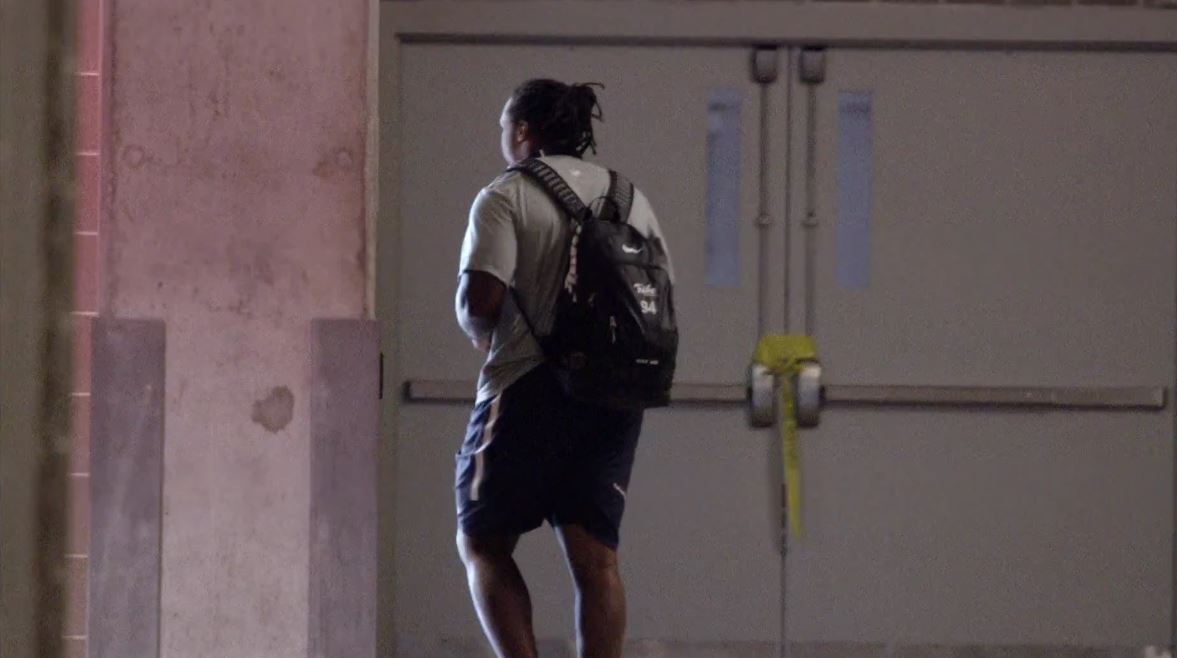 They hadn’t highlighted Coleman at all in either of the first two episodes, but when it became clear that he was about to be cut, I felt a very real sense of anxiety and heartbreak for him. The same thing happens if I watch one of those Discovery Channel shows about lions in the savannah. As soon as they start chasing after a gazelle or water buffalo I’m like, “No, no, no. RUN, GAZELLE. RUUUUUUUUUN!” I can’t be the only one who feels like this, right? I’m terrified of watching the last two episodes. The Texans will cut 37 players. I’m not sure I’m ready for that. 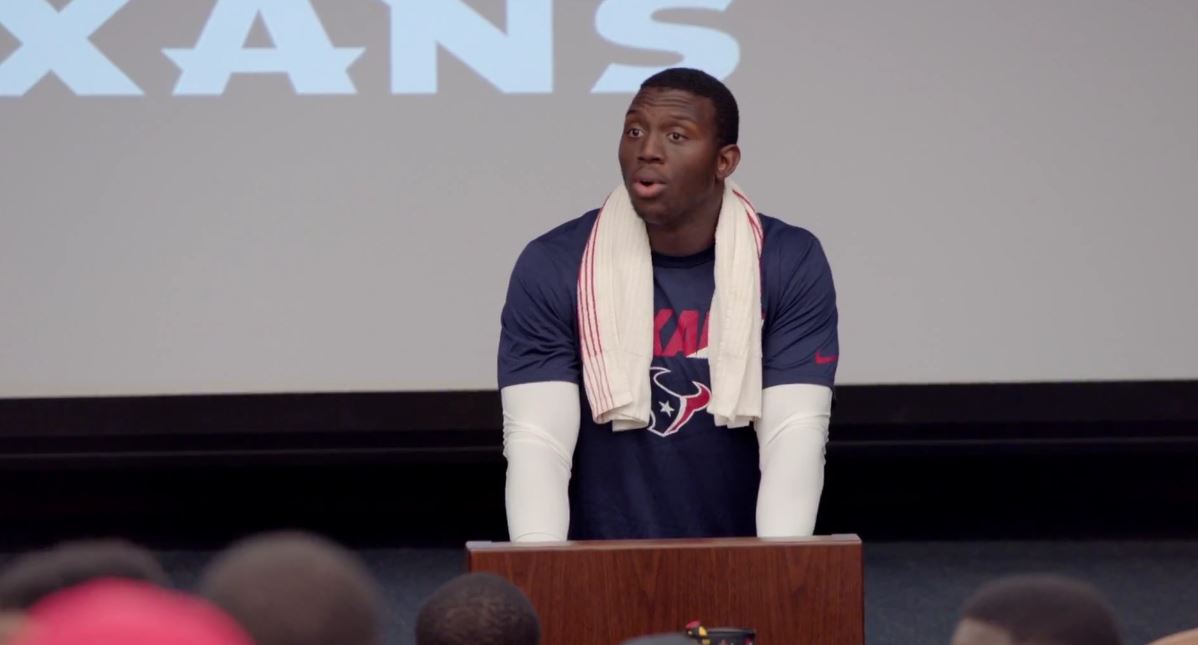 Thanks to an uncomfortably numb performance from the Texans offense during their preseason game against the Broncos, coach Bill O’Brien opened this competition up some, hitting 16 variations of FUCK in Episode 3 to just six for Vrabel.

In the interest of specificity, I should mention that O’Brien personally uttered only 11 of them. The other five came from tight end Khari Lee while impersonating O’Brien during the rookie skits vignette, but I’m counting them toward O’Brien’s tally here because this is the FUCKS Competition, not the Olympics, and Lee’s impression was universally recognized as amazing. We have a bit of leeway with the rules. 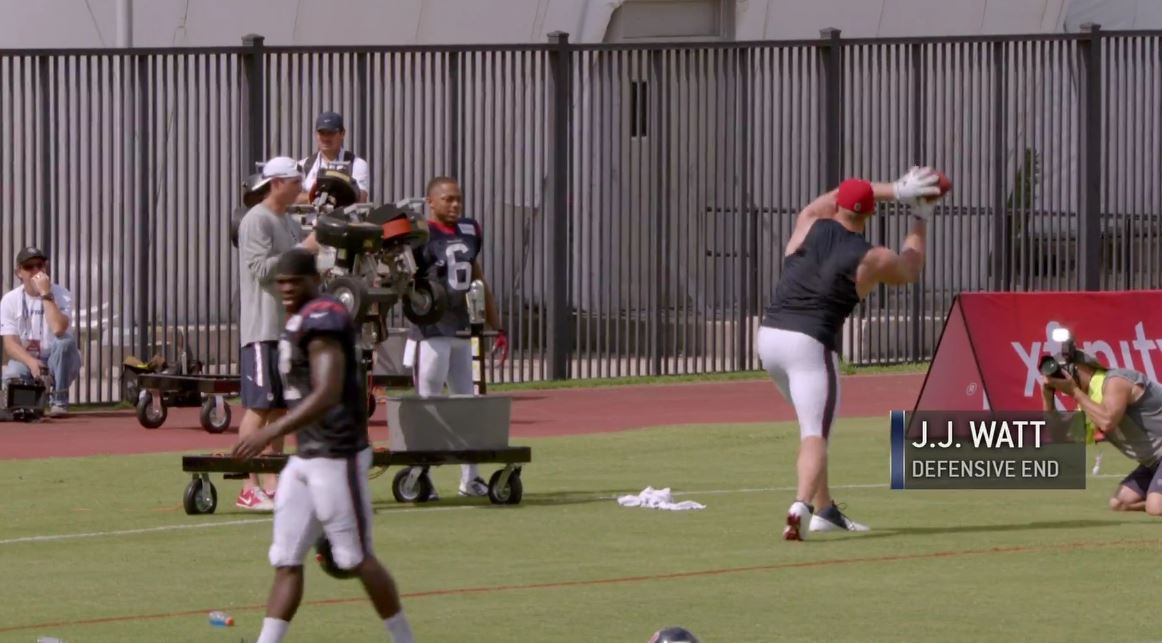 1a. J.J. Watt forcing a goal-line fumble during practice.

1d. J.J. Watt swatting the stuffing out of a tackling dummy.

1d. J.J. Watt swatting the stuffing out of a large human man.

1e. J.J. Watt swatting a pass out of the air during practice and then wagging his finger.

1f. J.J. Watt bragging about having shut down an entire offensive series all by himself.

1g. J.J. Watt throwing footballs over a mile to fans all the way up in the second tier of the stadium. (He was remarkably accurate.)

1j. J.J. Watt catching balls being fired out of a throwing machine at 500 mph from three feet in front of it.

Rookie wide receiver Uzoma Nwachukwu, who was charming and funny off the field during a trip to NASA’s Space Center Houston, and cornerback Charles James II, who was exciting and effective on the field both during practice and the game against the Broncos. I hope they both make the team. They’ve shown them both more than once so I already care about them deeply. 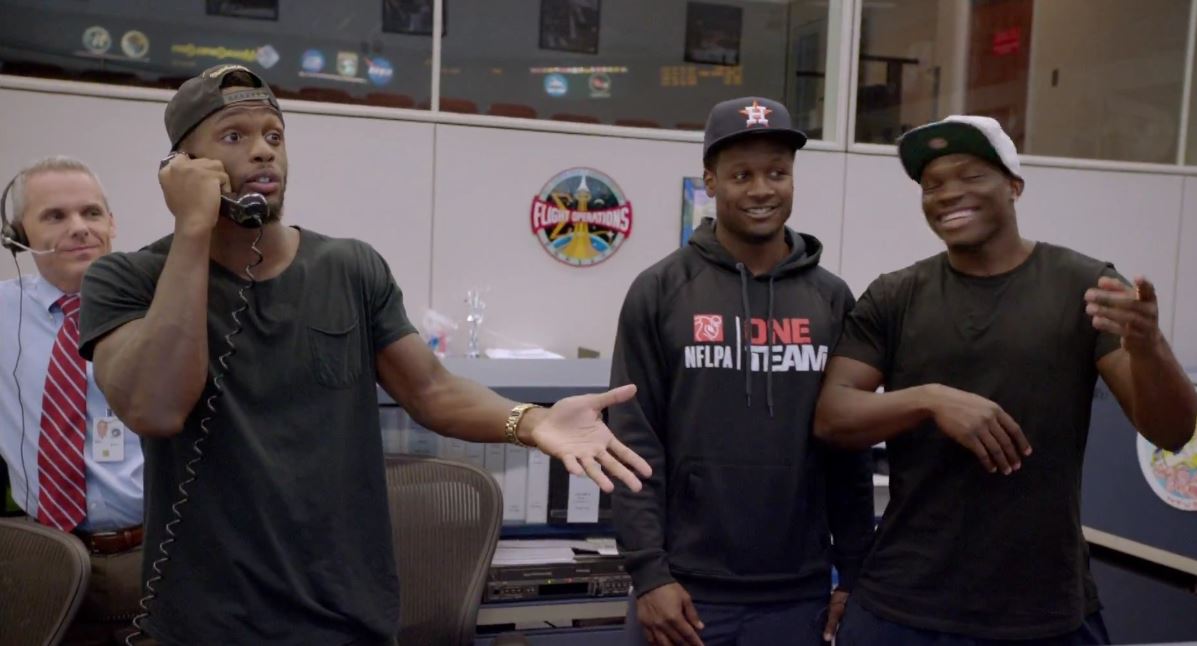 Beautiful. It deserves its own section. Uzoma shined during the segment, all warm energy and sincerity. They let him drive a modular robotic vehicle (a space car, basically), and he looked completely overwhelmed with awe and it was just wonderful. He fired off question after question after question during a tour that, excepting his teammates, was full of children, and they were lush and gorgeous.

At the beginning of the tour:

Later in the tour:

“Another dumb question: Is there water on space?”

Later in the tour:

As they’re walking into a NASA Control Room that’s connected to astronauts currently in space:

When he watches a video feed of the astronauts in space turning zero-gravity flips:

When he gets a chance to talk to the astronauts in space:

“Hello to you brothers. My name is E.Z. I got a couple questions. I loved Pluto as a planet. Like, what … what happened there?”

“When y’all are up there, is it like a roller coaster?”

Please, Coach O’Brien, sign him to a max contract immediately.

The Best Transition Into an Unexpectedly Gross Scene 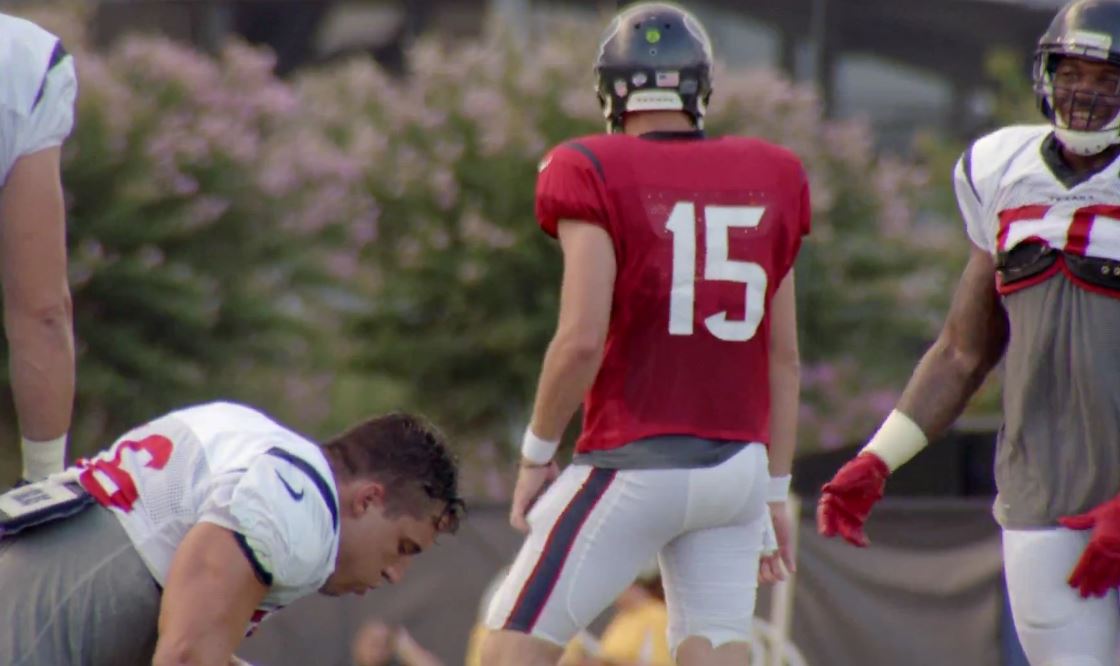 There was a segment where Charles James was playing both offense and defense during a practice. He did well, and the coaches were excited about him possibly playing running back. The narrator, with his perfectly golden voice, ended that section and led into the next by saying, “Where James will ultimately end up is about as easy to predict as the next thing out of Brian Cushing’s mouth,” and then there’s Brian Cushing just vomiting his whole stomach out.

JADEVEON CLOWNEY IS BACK 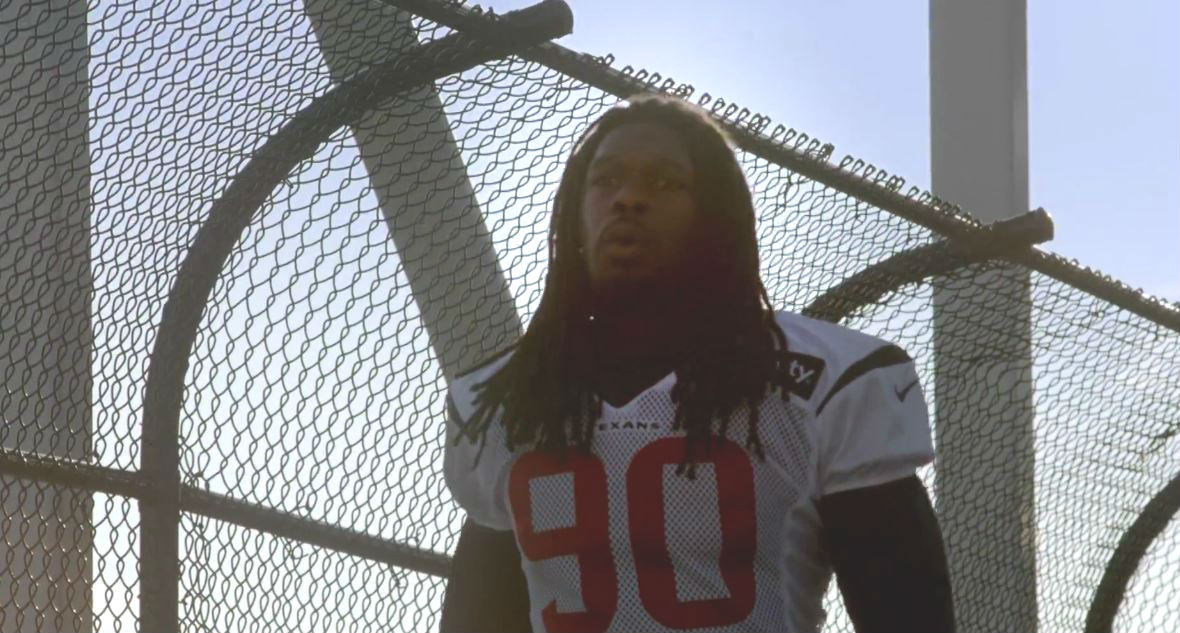 Did you know Jadeveon’s nickname is “Doo Doo”? It is. I read one story that said he got it after he accidentally pooped in a pool as a child and then another story where his mom said he got it because her favorite 2 Live Crew/Uncle Luke song was “I Wanna Rock (Doo Doo Brown).” I don’t think it matters which version is the actual truth, all that matters is that we give him a better nickname ASAP. Let’s get that started, please. Here are five nicknames off the top of my head.

Maybe collectively we can do better. 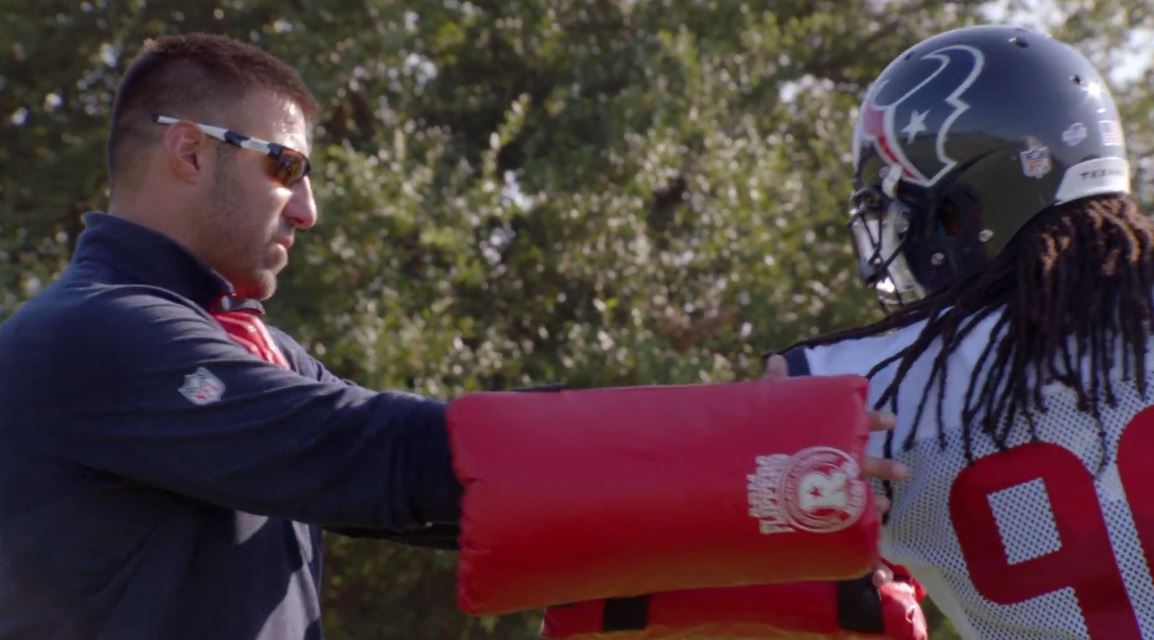 I am 34 years old. I have a wife and three sons, which is proof I have had sex. I bought a home last year. My wife and I have cars and cable and food in the refrigerator and a bunch of other things like that. I (help) take care of the children. I provide for my family. I kill bugs that get inside the house and one time I even touched a lizard with my bare hands. I do all of the things that a man is supposed to do. I know this. I understand this. And yet, when I watch linebackers coach Mike Vrabel during his small segments on Hard Knocks, I do not feel like a man. I feel like a tiny, helpless baby. I’m not sure why Vrabel appears so manly, or even HOW he appears so manly, but he is, and he does. Is it because his neck looks like the base of a 100-year-old oak tree? Is it his shoulders, which are about six feet across (my shoulders are about 18 inches across)? Is it his haircut? Is it the bass in his voice? What is it? I think it’s that underneath all of that, underneath his mountain body — it’s that he’s insightful, which is more intimidating than all of that other stuff.

During the preseason game against the Broncos that was shown on this week’s episode, Coach O’Brien got to shouting about wanting somebody to have “some juice” on the football field, which is what the coaching staff says when they want someone to do something exciting. Rookie linebacker Lynden Trail made several key plays in a row after that, then charged off the field shouting about having the juice. He said something about having done it for Vrabel, and the coach immediately responded, “Don’t do it for me, do it for you,” and that’s for real just some super dad and man advice and insight.