Dave (Chappelle) and Dave (Letterman), Talking About Being Seven Years Late to Work, That Extra $40 Million, and a Happy Return to the Stage 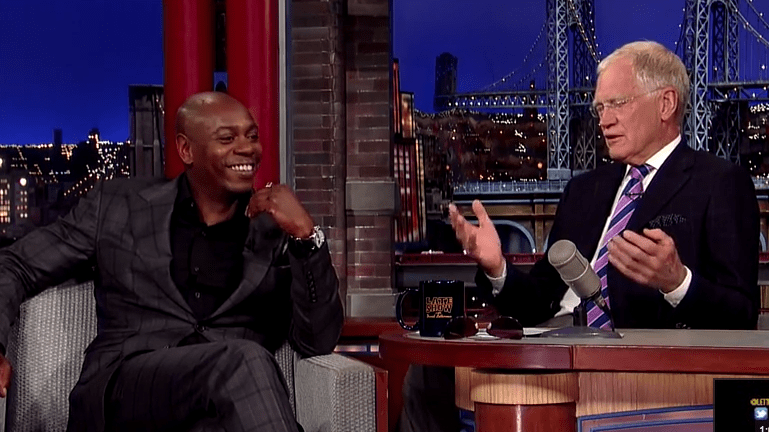 Last night, on television, Dave Chappelle was a guest on Late Show With David Letterman. They talked for almost 15 minutes. It was great.

The peg of this rare Chappelle appearance is his stand-up concert run beginning next week at New York’s Radio City Music Hall. The scope of his New York flyby has expanded since the original announcement, extending from three dates to nine (June 18-26), and from solo Chappelle performances to nights with guests such as the Roots, Busta Rhymes, DJ Premier, Erykah Badu, Janelle Monae, and Nas doing Illmatic while backed by a 45-piece orchestra.

If you are at all invested in Dave Chappelle’s next act, one where he happily comes and goes, making you laugh while expertly critiquing the culture at large, this late-night talk should get you excited. Because, for one, the jokes are still there. Chappelle, in responding to his departure from Chappelle’s Show and Comedy Central, said, “Technically, I never quit. I’m seven years late for work.” That should get you excited that he’s returning to the stage. The fact that he’s bringing his music friends along harks back to a happy Dave, the one from his show and Dave Chappelle’s Block Party. When Chappelle tells stories involving Wesley Snipes and mocking himself, saying the only difference between $10 million and $50 million is “an astounding 40 million dollars,” that should get you excited. And when Chappelle addresses David Letterman as “Dave,” immediately transporting you to a place of Chappelle as “Chip” saying, “Dave, Dave, it’s the goddamn cops. I’m gonna ask them for directions,” it should make you giddy.

But standing out from the highly entertaining back and forth was one of Dave and Dave’s final exchanges, which proved more reassuring than any joke. Letterman, in describing Chappelle’s elongated run at Radio City:

Letterman: You’re going to be a very busy man.

Chappelle: I’m going to love every minute of it.

That’s what you want to hear. The great worries in any “comeback” stem from the motivations and pressures that have spurned the return. It’s a recurring discussion with something like the Outkast reunion world tour, where you’re worried that the reunited aren’t happy they’re doing it. The same way you cringe thinking about an aggravated Andre Benjamin, you have concern about an agitated, grumpy Chappelle.

But Dave seems happy. And after a decade of not really knowing how he felt about anything, it makes for a tremendous, triumphant sigh of relief.

The ‘If I Play This R&B Singer’s Music, Will He Help Me Have Sex?’ Chart

Do You Like Prince Movies? Podcast: 'The Fault in Our Stars' and 'Edge of Tomorrow'