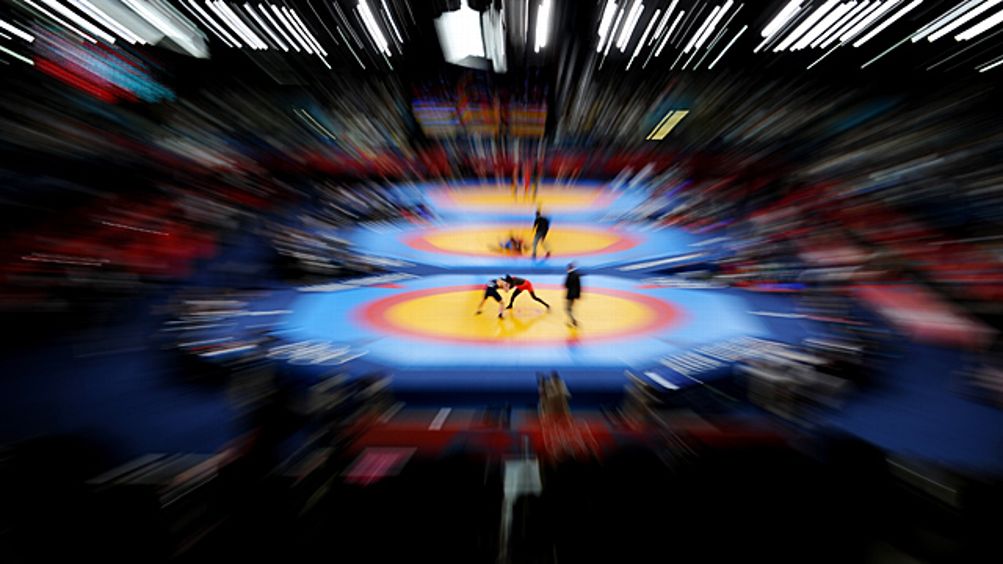 The most hilarious moments at every Olympics take place at the opening and closing ceremonies — and I am not talking about the herd of pianos that kicked things off in L.A. in 1984 — when the officials of the International Olympic Committee indulge in all manner of ersatz Hellenic gobbledygook meant to convince the suckers that the Olympic Movement represents a continuum of values all the way from pagan Greece to the materialistic present, as though there were a straight line through history from Euripides to Mary Carillo sitting in some swimmer’s rec room, trying to coax a quote from a 17-year-old who’s been half-underwater for most of her life. This preposterous exercise is undertaken so that the suckers won’t notice that, ever since Pierre de Coubertin revived the Games so that, one day, Roone Arledge could turn them into a TV spectacular, the Olympic Movement has gone with remarkable consistency in the general direction of a bank in the Caymans.

The whole lucrative sham of it all was exposed once again this week when the executive board of the IOC — Informal Motto: “Me Some Too, Yes?” — recommended that wrestling be dropped as an Olympic sport in the 2020 Summer Games, which are supposed to be held in Istanbul, Tokyo, or Madrid, depending on whose checks clear first, I believe. According to the board, wrestling is no longer a “core sport” in the Olympics and it will have to petition for inclusion in 2020 along with, and I am not making this up, sport climbing and wakeboarding. This is terrific. Why don’t we just hold the Olympics in an REI outlet store somewhere?

As always, the IOC declined to be open about its rationale and, as always, has declined to explain itself in actual English. “This is a process of renewing and renovating the program for the Olympics,” explained IOC spokescritter Mark Adams by way of saying nothing at all. “In the view of the executive board, this was the best program for the Olympic Games in 2020. It’s not a case of what’s wrong with wrestling, it is what’s right with the 25 core sports.” And then, it is possible that Adams tried to sell everyone at the press conference some fine aluminum siding.

I’m not exactly sure why this recommendation was made, but I suspect wrestling was guilty of insufficient pixiehood, as much of a capital crime in the modern Olympic Movement as is paying for your own dinner. This latest move has prompted outrage around the world, and not just in the United States. For example, the Iranians are wrestling-goofy; they finished tied for third in the wrestling medal count in the London Games, behind Russia and Azerbaijan. And now they are furious. Just what we all need. Another venue in which unaccountable international organizations can cheese off people living in the Middle East. Well played, overstuffed blazers. Very well played, indeed.

But I’m not worried about the possible explosion in the current geopolitical tinderbox. Oh, hell, damn, no, I’m not. You know who worries me?

That’s who worries me.

I will grant you that the Lord of Olympus has been dormant for lo-these-many millennia. It’s been long centuries since he smote anyone, or turned anyone into a bird or a tree, or came a’courtin’ disguised as a swan. (That’s Björk’s job, anyway.) But he’s taken an awful lot of guff in the meantime. He’s been portrayed (badly) by both Laurence Olivier and, more recently, by Liam Neeson, who said, while in character as Zeus, “Release the kraken!” despite the fact that the kraken is a Norse myth, which is why Zeus and Odin aren’t speaking anymore, except through their attorneys and through the occasional blizzard over the Baltic. But I have it on good authority that He does watch sports in his semi-retirement — He teased the Patriots and the over a couple of Super Bowls back. You may remember it as Hurricane Nadine — and he cannot be happy with this latest development. I’m not sure how big a fan of either dressage or the two-man scull he is, but he’s been watching wrestling in the Olympics since there’s been an Olympics. He’s been watching the Olympics on Olympus, where I’m sure he gets cable and can watch all the sports on all the various platforms. And if he tunes in seven years from now, and there’s no wrestling to watch, well, I wouldn’t want to be sunbathing on Corfu that day. That’s all I’m saying.

I mean, for the love of Aphrodite, if you’re going to put on this festival of mock classicism every four years, at least do it right. I’m not arguing for naked athletes, mind you, because I’m a fencer and, well, wow. But you should at least grandfather into the modern Olympics all the sports that were in the ancient Games. I’m willing to compromise on chariot racing. We can save that for the next Summer X Games. And as for the pankration, which apparently was the very first mixed martial art, and which Theseus was said to have used to make the Minotaur tap out, I think we might find an audience somewhere on cable.

But there has been wrestling in the Olympics since 708 B.C., which is a lot of years before C came along and retired Zeus from the full-time deity game. Back in the day, there were two kinds of wrestling: orthia pale, or upright wrestling, and kato pale, or ground wrestling. In the former, you had to throw your opponent to the ground three times to win, and you kept wrestling until either you or your opponent did so. In kato pale, the Greeks invented the submission hold. The object essentially was to apply as much pressure as you could. It was up to your opponent to signal when he’d had enough. You couldn’t strike your opponent, or gouge his eyes, or bite him. (Here we see that a number of changes were made when Zeus handed over direction of wrestling to his anointed successor, Jerry “The King” Lawler.) There also were no weight classes. You wrestled whoever was next. Before the match, each wrestler was greased with olive oil and then powdered, to make him easier to grasp. (This, I suspect, was a job nobody wanted, like being the clubhouse boy or driving John Daly home from the nightclubs.) And the matches were conducted in an arena that was kept muddy and sticky and known as the keroma. Thus were born generations of cheating groundskeepers that stretch even unto this day.

In fact, wrestling gave us one of the first Olympic superstars — Milo of Croton, which was in southern Italy and not on-Hudson. Milo won the wrestling competition at the Olympics six times in a row. Supposedly, he trained by carrying a full-grown bull around on his shoulders. (Didn’t I see Stallone do that in the montage sequence from Rocky IV?) Let’s go Up Close And Personal with this legend, shall we? Right after this word from the army.

Apparently, Milo — or Milon, as some accounts have it — was not only a champion, but quite a showman, as well. He was said to be able to avoid crushing a pomegranate while holding it in one hand and challenging all comers to open his fingers. He also would stand on a greased metal plate and dare people to try to push him off. And, for a grand finale, he’d tie a cord around his head and break it just by popping the veins in his forehead. (We can get Simmons to do this just by bad-mouthing Shawshank.) And people thought Bo Jackson was amazing because he could play football and baseball. This guy could win four or five gold medals and then be the closing ceremonies all by himself.

Unfortunately, success came at a cost for Milo of Croton.

(Wait. An episode of Behind the Music seems to have broken out here. Hang on. There we go. We continue.)

One day, Milo was wandering in the forest, probably pondering endorsement deals, when he came upon an ancient tree that had been partly split by a woodsman’s wedge. Thinking that he might add another test of strength to the old act, Milo set about trying to split the tree with his bare hands. (Some accounts have him using his bare feet as well.) Unfortunately, the wedges slipped. The split in the tree closed on Milo’s hand, trapping him there. Whereupon he was devoured by wolves. This is an even worse post-Olympic career than Ben Johnson has had.

This is the history being carelessly cast aside by the IOC, which is risking the wrath of Zeus in the bargain. The worst that can happen today is that an IOC member might get his hand stuck in a steam tray at some buffet, whereupon his fellow executive board members would eat him on their way to the prime rib. But they’d rustle his pockets first.