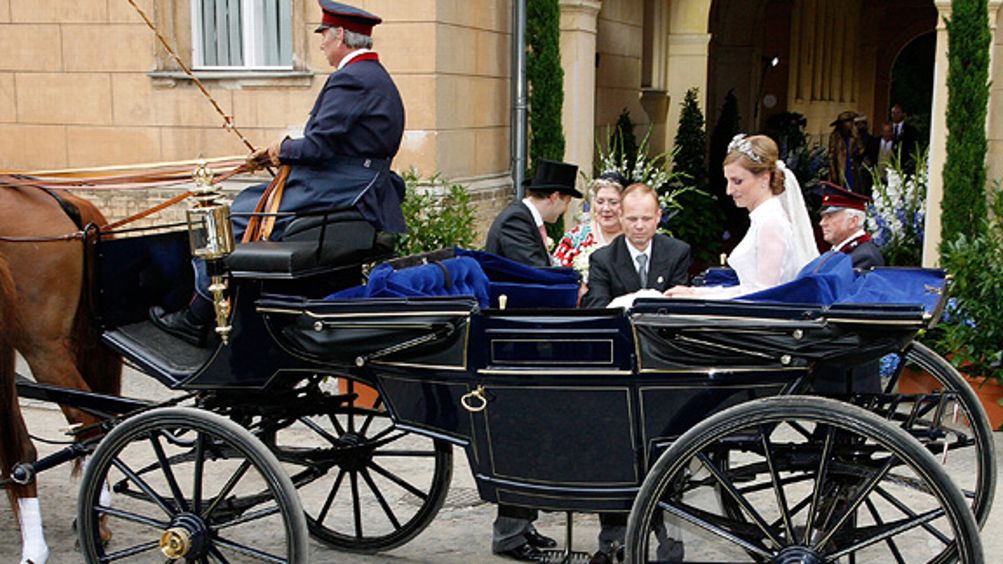 I like to imagine the New York Times‘ Weddings & Celebrations editorial process to be not entirely unlike this charm school: Some announcements need some work, some are very nice, and some are very niiiice. (And then there’s the slush pile marked “Marla Hooch.”)

With this in mind, I used my own standard of beauty, the proprietary NUPTIALS algorithm, to determine which couples might be the most satisfactory to the New York Times. And while any civilized soul knows that August doesn’t actually end until Labor Day, Roman calendar be damned, I nevertheless present you with the best weddings of the past four weekends. Batter up, hear thy call!

Note: The numbers represent point totals in each of the components — Names, Universities, Parents, Tropes, Identifiers, Avocations, Locales, Special Situations — of the NUPTIALS score. The total score is shown in (bold). Ties are broken by a category-to-category matchup.

9. Mercier Kinney and Redmond Finer
2-0-15-0-2-1-7-2 … (29)
Best sentence: “In the evening, the Rev. Francis H. Wade, an Episcopal priest, led a religious ceremony at Castello di Vicarello, a hotel and spa built in a restored castle in Poggi del Sasso.”

7. Andrew Brennan and Anthony House
0-27-5-0-0-1-0-0 … (33)
Best sentence(s): “The couple met at Oxford University, from which Mr. Brennan received master’s degrees in comparative social policy and management research, and from which Dr. House received a master’s and a doctorate in modern history. He was a Rhodes scholar in 2003.”

While no couple this month could quite measure up to July’s 40-point powerhouse of Charlene Wittstock and Prince Albert II, Sheena Chestnut and Eric Greitens came mighty close. (If the bride had already earned that elusive Harvard PhD instead of being a mere candidate for it, they woulda leapfrogged the royals.) They did manage to squeeze past Julia Kiechel and Harold Birnbaum, though, despite that couple’s identically sterling résumés. Do you think they went to all their interviews as a package deal? Their eventual children will probably be under no pressure whatsoever to succeed.

A little further down the list. Lili Ruane and Winthrop Smith Jr.’s announcement is a treasure trove, with this being a particularly great moment in the annals of the New York Times‘ “of which”-itude:

Patricia A. Hill, a Universal Life minister, officiated at Sugarbush, a ski and golf resort in Warren, Vt., of which the bridegroom is an owner.

Lest Winthrop be sore after those long days on the slopes or the links, Lili’s got him covered: “She is a therapist in Shelburne, Vt., who uses yoga and hands-on healing techniques in her work.” Between that and the groom’s Rear Admiral of a stepfather, I’m starting to wonder if this announcement wasn’t actually intended for the back pages of the Village Voice.

When I Googled to see whether it was Carlisle Brigham or Anthony Champalimaud who attended the insanely beautiful St. George’s School, where the two were wed by an Episcopal priest with a VI in his name, I struck gold with some reunion RSVP list. Look at those names! Two von Trapps and something called “Crispin Muzzy!” Do you think he’s of the language video Muzzys?

One of my favorite announcements of the month was Michal Lucas and Uri Friedman. Right off the bat you know they’re pretty into their faith — the bride’s father and the groom’s grandfather are both rabbis who are officiating at the wedding, the bride teaches at a Jewish day school, the bride’s mother teaches at a Jewish school, and the groom’s mother is a professor of modern Jewish history — but it’s when you get to this line that you know they’re REALLY serious:

The couple met in 2001 when they were teenagers at Camp Ramah in the Poconos.

Camp love! Ain’t nothing better. My pal Ben and I have been contemplating starting a reading series called “Pitching Tents” about this very topic. Let me know if anyone wants in.

Those two weren’t the only ones who realized at a young age that they were meant to be. Chanda Ouk and Matthew Wolf first met as high schoolers. (That announcement is worth reading just for the randomest celebrity cameo I’ve seen in ages.)

And Lauren Hunt and Blake Brogdon met in kindergarten and first “dated” in sixth grade before finally becoming an item early on in high school and never looking back. “It’s the only thing I’ve ever known, and I love him,” Lauren says. “He’s helped shape who I am, and I can’t think of what kind of person I would be without him in my life, and hopefully I’ve done the same for him.”

Awwww. But not nearly as awwwwwwwwwwwwwwwww as this featured story about two men on the other end of the age spectrum who devoted most of their adult lives to one another, are now both in the hospital with serious ailments, and nevertheless made sure to get married (in the patient lounge) as soon as it was declared legal in New York. “With a dignity that defied the circumstances, the wedding couple clasped hands on the adjacent armrests of their wheelchairs and said their vows.” If there are any typos here, it’s because my screen’s getting blurry.

You know what’s not dignified, though? This devastating announcement, which is just … I don’t know. All my best to the happy couple, I guess, and maybe it’s their favorite story or something, but if this groom were a loved one of mine I might be pretty riled at the tone of the piece. Here, I’ve condensed it for you:

Ms. Kelstein was never interested … But she wasn’t interested … She declined his many invitations that week … “She went, ‘Great, OK,’ and all of the sudden she wanders away” … Ms. Kelstein was not as excited … Ms. Kelstein changed seats for the remainder of the flight … She handed him her calling card, unenthusiastically … Then she took to heart her roommate’s advice that, unless she went out with him on at least one date, she would have no valid reason to be disinterested in him.

Um, congrats? Really, I don’t find this one much better; let’s just say that if a guy I was dating-but-not-dating did to me what he did to her, I’d be on the next ferry off Block Island, not “entwined on a hammock looking for shooting stars in the night sky.” Regardless, good for her for going all out with the schnoz-related pickup line: “You have the profile of a Roman emperor.” Everyone’s assignment over the next month is to say that to a stranger and see what happens.

Maybe honkers are in, though, because here’s another announcement, that of Vanessa Zahorian and Davit Karapetyan: “He’s dark-haired and big-nosed. I liked his big nose. His profile is so striking.” Quick, someone find me a third example of this aquilinophilia so I can declare it a trend! Alternatively, you could just find me a third pair of ballet dancers: Just as Zahorian and Karapetyan are principal dancers with the San Francisco ballet, Megan Fairchild and Andrew Veyette are principal dancers with the New York City ballet company.

If you can get past writer Lois Smith Brady’s disturbing obsession with the bride’s ballerina physique (she calls the wedding “like an anatomical lesson” and describes the bride’s shoulder blades as “moving like the interior of a clock as she walked”), this is a really fun piece. Veyette in particular seems like the real-life inspiration for Cooper Nielsen, complete with the “reputation for being a bad boy … that cool smoker and drinker, the cool guy you think you can’t have a chance with.” He won me over when he talked about the chain-smoking, I must say.

There is one couple, though, who would like to see your chain-smoking male ballerina and raise you … “an Indian girl that lives in Williamsburg who’s a drummer in a band and wears a Pixies rock T-shirt every day.” And is a doctor. And, ugh, an Eagles fan. Wait, are we having a quirk-off? If so, please say hello to the pair who met during an ’80s British pop night on the Lower East Side and “exchanged notes in a paperback copy of ‘The Bluest Eye’ by Toni Morrison, which Dr. Dardis had in his coat.” Unsurprisingly, this was their first date:

After dinner, she led him to see a 1920s movie without dialogue.

“Basically,” he said, “it was about the sexual life of various sea creatures, including sea horses and octopuses. Not what I was expecting.” Not exactly a date flick, conceded Ms. Javid, who noted that they loved it.

On to some quick takes about some of the many August couples.