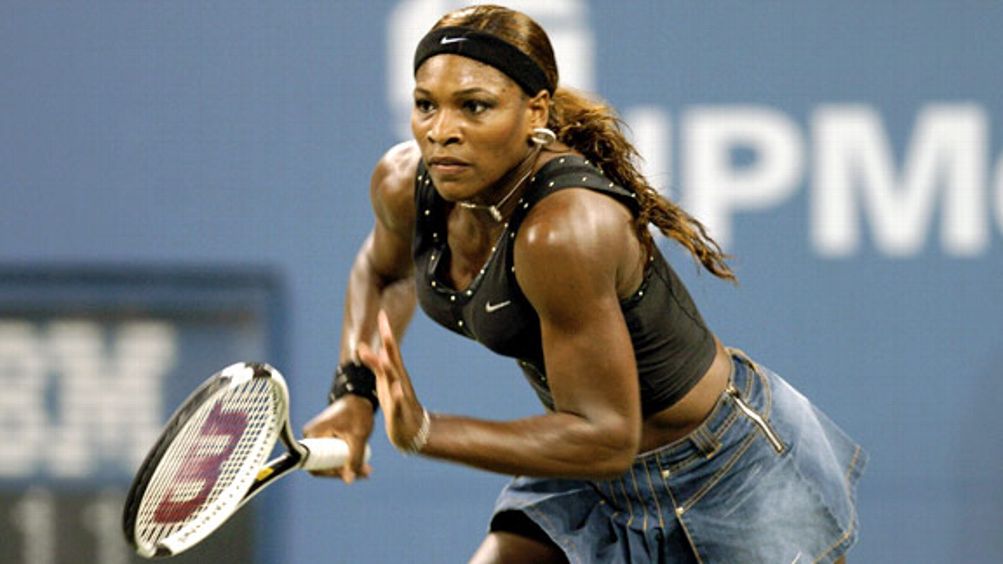 She probably should have worn a red headband and the shortest of white shorts. Then, at least, she’d have had homage going for her. But Serena Williams wasn’t John McEnroe in the U.S. Open women’s final two Sundays ago. Nor was she quite herself. The entire tournament she wore sleeveless minidresses, one in red with some black, the other blue. The fit was impossible. It hugged her stomach and didn’t seem to restrict her breasts. This wasn’t sportswear exactly. With those arms, calves, and curves, it was a comic-book costume. It was also, by Serena Williams’ standards, tasteful, boring, and quite possibly redundant. We already know she’s a superhero.

One longs for her Open outfits of yesterday: the notorious blatancy of the so-called cat suit and blond ponytail of 2002. We miss 2004’s pleated denim skirt, studded black top, and shiny, knee-high boots that made her look like a backup dancer for MC Hammer. We miss the unabashed, un-self-conscious, vividly tacky sartorial bravery of Serena Williams. We miss the badness of her bodaciousness, the alluring, amusing Sir-Mix-A-Lot-ness of it all.

The year she spent recovering from a couple of foot surgeries and a nearly fatal pulmonary embolism renewed her appreciation for victory and robbed her of that outré sense of style. In the spring, while preparing for her summer return, she did issue a photo of herself neck to ankle in Bubblicious pink Lycra. But it was a coming attraction for a movie still awaiting release.

Williams spent the hard-court season trying something new. She wore the same green, half-length-sleeve top and black skirt for three consecutive tournaments, and she hit the ball in relative silence (she was just concentrating, she said). Until she withdrew from Cincinnati, citing a toe injury that didn’t stop her from attending the Kim Kardashian-Kris Humphries wedding, Williams seemed headed toward three titles in three weeks. On their own, the green and black weren’t at all interesting. But Williams added purple highlights to her Pointer Sisters ponytail that brought the rest of the outfit into brilliant focus. These were the colors of the Incredible Hulk.

At the Open, that Marvel dress, by Nike, seemed to be immaterial to her success. It didn’t really tell a story the way Williams’ clothes once did — or, at least, the story it told was dull. There was no drama. There was no surprise, only anticlimax. She was more daring when she dressed for Puma, which made both the cat suit and the underrated extra-strength, extra-sheen, black-seaweed dress she wore to the French Open final in 2002. Nike signed her to a lifetime contract the following year, and she became a bigger star and a “classier-looking” tennis player. The company had a hand in the elegance and maturity on display when she beat her sister Venus in the 2009 Wimbledon final. Her hair was curly and loose. The skirt was simple: short, roomy, and white. But it came together in a way that made her look like her mother and promised that, on the court, understatement might be Williams’ new style.

A few months later came The Incident, in the semifinals of the U.S. Open, then her health scares. Ever since, she and the company have held back. Nike helped Williams become that fearsome backup dancer seven years ago. Of late, however, the company appears to be putting her in clothes they hope to sell, which means they’ve missed the point of their star. Serena Williams doesn’t play tennis in a flagship store window.

Resuming the form that won her Wimbledon last year, Williams blasted her way through the U.S. Open draw — gruntlessly, too. She was concentrating. Then in the final, against a smart, sharp Samantha Stosur, she lost it. Her tirade with the chair umpire, Eva Asderaki, was the sort of exchange that happens between players and umpires in baseball several times a day. People like seeing a baseball argument. Watching Williams berate Asderaki was uncomfortable partly because Asderaki gave nothing back to Williams. She simply sat in her chair like a Ralph Lauren lifeguard and absorbed Williams’ tirade just as that line poor line judge did with Williams in the semifinals against Kim Clijsters two years ago. It was also uncomfortable because Williams is still magnetized for drama. She managed to go an entire summer as Bruce Banner. Then in the biggest match of her season, she Hulked out. Do Richard and Oracene Williams know they named Venus and Serena backwards, or was that part of the master plan, too?

It’s foolish to blame what happened that afternoon on what she wore. But what if a season of noiseless, blandly dressed tennis broke Williams when she could least afford to break? What if her ridiculous style of yore is her sanest release? On the court, that style is a woman being who she is and not who we — or her corporate sponsors — think she should be. What if modesty and plainness have no business in Williams’ life? All summer she played it safe but picked the wrong match for danger. The only person happy that Williams didn’t play in pink Lycra is Sam Stosur.