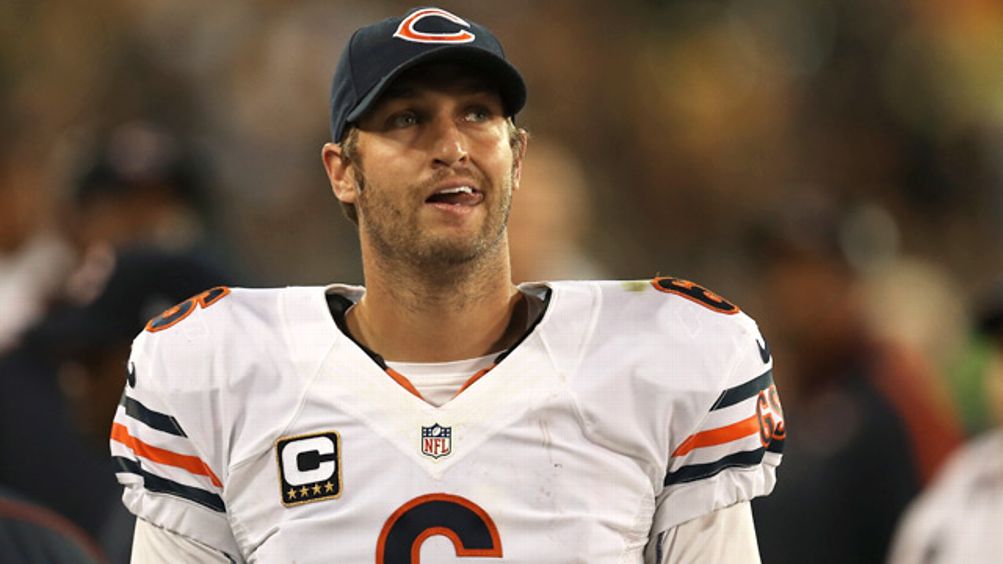 The dominant narrative surrounding Jay Cutler — to an extent unmatched by any player in the NFL — is that he needs to be fixed. That Jay Cutler is a few small changes away from being the quarterback we want him to be. That there are flaws so patently obvious and easy to fix that one new offensive coordinator or receiver1 or city will do it. Imagine if there were a Jay Cutler who didn’t throw four picks in one game! Or one who didn’t yell at his teammates when they screwed up! Or one who didn’t walk around with that smug look on his face all the time! We lash out at Jay Cutler after his bad games like we’re fighting with our significant others. If Jay Cutler would just put the dishes in the dishwasher instead of leaving them in the sink, we’d all have gone to the Super Bowl a long time ago.

Let’s turn this question on ourselves, though, because it’s going to tell us a lot about how we judge football players irrationally. Why does Jay Cutler have to get fixed? Why can’t he just be a pretty good quarterback who delivers one or two terrible games a year? Isn’t that good enough?

The problem is that we’ve somehow convinced ourselves that quarterbacks mill around at one level until they have a notably impressive game or season and establish a permanent new level of play, like they were characters in an RPG. That’s nonsense, but we’ve spent the majority of Jay Cutler’s career trying to pinpoint the moment in time when he took that big leap forward. We were sure Cutler had emerged as a franchise quarterback when he won that epic 39-38 game over the division rival Chargers in 2008. We were positive Cutler had taken the leap when he pushed a team whose most notable receiver was Devin Hester to an 11-win season and the NFC Championship Game in 2010. And we were definitely 100 percent onboard with the new Jay Cutler who led his team to a five-game winning streak last year just as he suffered a season-ending thumb injury. We keep telling ourselves that we’ve found the real Cutler, a guy who has eliminated his old faults and won’t go back up the pipe to World 1-1.

The reality is that Cutler has followed up each of those big moments with disappointments, and we’ve used them as proof that Cutler’s really a fraud and that those triumphs weren’t actually meaningful after all. That shouldn’t be a referendum on Cutler. It should be a referendum on us, the fans who are reading good and bad games as unassailable proof of Cutler’s ultimate value as a player when they’re really just peaks and valleys. What’s true is that those peaks and valleys tend to be more extreme for Cutler than they are for other players, but it’s not like Cutler transforms into a different player from one game or season to the next; he’s still the same guy. We deride his poor decisions and time spent bumbling around in the pocket when he has games like Thursday night’s, but those qualities aren’t far removed from the “aggressiveness” and “ability to extend the play” that you hear about Cutler when he’s doing well.

Compare Cutler to Brett Favre, for example, and it tells us a lot about why we get down on Cutler. Like Cutler, Favre was prone to awful games in which he’d toss up a bunch of interceptions, get down on his teammates, and generally look like a disaster. Just like with Cutler, we’d project our images of how Favre looked and acted onto our opinions of how he played. Because Favre was emotional and fiery, we saw him as a team leader. Cutler’s aloof stoicism and smugness have become the calling card for his critics, despite the fact that his teammates love him.

It’s more than that, though. We let Favre get away with those bad games because he won a Super Bowl relatively early in his career, at which point he was free to produce all the stinkers he wanted. You wouldn’t be surprised to hear that Favre trails only Drew Bledsoe for most four-interception games since 1990. You know who’s tied with Favre, though? Tom Brady, another player who won early in his career and gets insulated from the sort of critiques Cutler suffers from when he plays poorly.2 How viciously would we have excoriated Cutler if he had been the one at the helm of that dismal Patriots loss to the Ravens in the 2009 playoffs? Or the Jets loss in 2010? What if Cutler had been the one who scored 14 points in Super Bowl XLII? Because Brady had already won his Super Bowls and established himself at some higher level of performance, we see those disappointing performances as bad games. If they had been Cutler starts, those would have been career-defining failures.

The one current player who gets treated similarly to Cutler is Tony Romo, which makes for a juicy juxtaposition. At this very moment, we are celebrating Romo for finally getting over the hump and beating the Giants in a nationally televised game.3 We are in the middle of debating whether or not this is a new Tony Romo, a guy who has somehow changed (at age 32) into somebody who can handle the pressure of having every set of eyes on him. I promise you: Nothing has changed about Tony Romo. The difference between the “old Romo” and the “new Romo” amounts to the foot by which he missed Miles Austin on last year’s would-be game-winning pass against the Giants in Week 14. A few weeks from now, Tony Romo is going to throw an interception at the wrong time and his team is going to lose. At that same time, it’s entirely possible that Jay Cutler will be in the middle of a hot streak for his Bears, and we’ll be swapping the titles of “healed” and “sick” that are currently bestowed on Romo and Cutler, respectively.

As fans, we need to let those labels go. Tony Romo is not turning into some drastically different player at 32, nor should he; he’s a very good quarterback. Jay Cutler is not going to stop taking risks and holding on to the ball after 2,500 NFL passes, nor should he; he’s also a very good NFL quarterback. There is not going to be a game or a season that satisfies any of us that Jay Cutler is fixed until he finishes that event by hoisting the Lombardi Trophy over his head. And if he does that, he’s still going to be the same erratic, aggressive Jay Cutler that he is today. Favre was Favre. Brady is Brady. Let’s accept that Cutler is going to be Cutler.