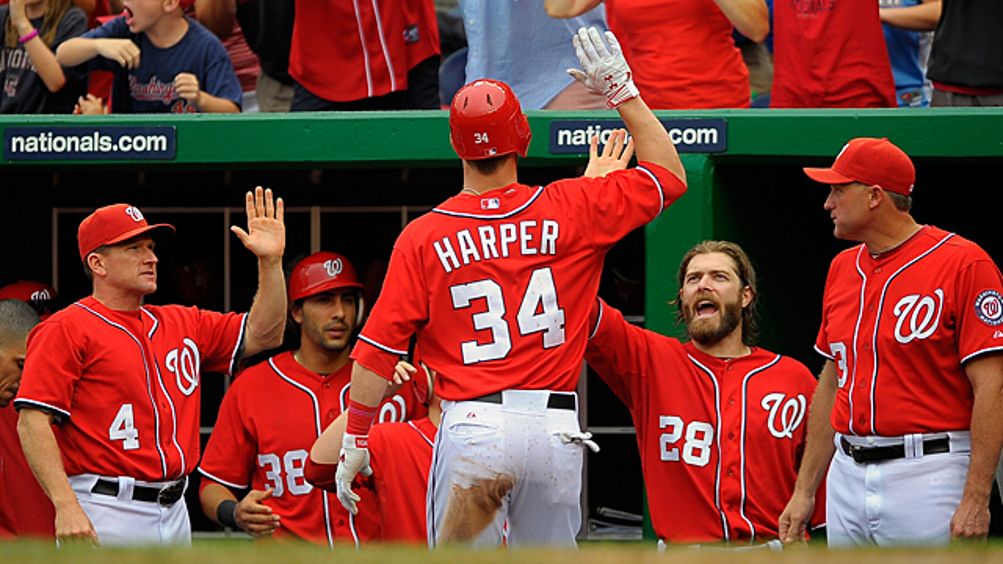 A pennant race breaks out today in Washington, D.C., where the Atlanta Braves come to town trailing five games behind a franchise representing a city that already gave up two baseball teams, and that hasn’t seen a team representing it play in the postseason since Cordell Hull was able to score good seats along the third-base line. The Washington Nationals — the only team in MLB history that takes its official name from what had been a nickname for the manifestations of baseball in Our Nation’s Capital, both of which were called the Senators, but one of which is now called the Twins and the other of which is now called the Rangers — have the best record in baseball and, Sunday, after a nearly two-and-a-half-hour rain delay that drove remarkably few of the locals out of the gunmetallish ballpark that cost this spavined metropolis a preposterous amount of money, the Nats beat the New York Mets, 5-2, in a neat little ballgame that showed off exactly why we’re all going to have to watch breakaway shots of the Cordell Hulls of today during our playoff baseball telecasts.

What is the cliché? “Washington is Hollywood for ugly people”?

Tim, that’s Peggy Noonan down there, shelling peanuts with Henry Kissinger. Let’s see if we can catch ’em on the Kiss Cam!

On second thought, let’s not.

On a purely baseball level, there’s very little not to love about these guys. They’re a young team led by an old guy; manager Davey Johnson looks at this point like nothing more than Hubie Brown coming out of the past to lead the Memphis Grizzlies a few years back. They have a legitimate rookie star in Bryce Harper, who broke out of a terrible slump Sunday with a triple and a monstrous home run, and who, at the end of a season in which he became both a baseball and YouTube sensation, shows all the signs of a man exhausted by a year’s worth of clown questions. On those occasions, being able to lapse into fluent Belichickian is a valuable skill, bro.

“It doesn’t matter whether my numbers are crappy or not,” Harper said Sunday. “We’re in first place, that’s all that matters.”

“I think he was trying to send a message to me — ‘Don’t bench me.’ That’s what you’re missing,” Johnson said. “I think that, sometimes, he just gets a little frustrated and overaggressive.”

And, Sunday, they were led by pitcher Gio Gonzalez, who earned his 16th win on a day in which he left his best stuff back around noon, when he prepared for a game that wouldn’t actually begin until four hours later. Gonzalez is a throwback — a Whitey Ford–size guy in an era in which the gap between major league pitchers and NBA three-men is closing rapidly. On Sunday, with almost everything he threw staying up and dangerously over the plate, Gonzalez battled out of deep trouble on several occasions — most impressively in the fourth inning, which began with a leadoff triple by New York’s Ronny Cedeno — and kept his game alive long enough for the Nationals offense to build him a cushion.

“It means a lot, especially coming to a new organization, coming to a new team,” said Gonzalez, for whom Washington sent a clutch of prospects out of its loaded farm system west to Oakland and offered a fat extension; Gonzalez now shares the major league lead in wins this season. “This is an accomplishment we all did together. One through nine, they played their hearts out for me every night. This is definitely a thank-you for them, for the bullpen. It started off for me in spring training. They welcomed me and gave me the opportunity. The first thing I thought when they re-signed me was that I’m going to go out there and give it all I got. I’m not going to think anything bad about anyone else. I wanted to go out there and show them what they signed me for. They gave up four guys for me, and three of them are in the big leagues now. So that lets you know what that’s all about.

“It’s a good way to go to the next series. We feel good with Jordan Zimmermann on the mound and then [Stephen] Strasburg on Tuesday, we can show them a little bit.”

The fact that Gonzalez is having the year he’s having has enabled the Nationals to create the season’s finest controversy — namely, the decision by Washington general manager Mike Rizzo to hold Strasburg to a strict innings limit, even if it means shutting down his 24-year-old ace for the entire postseason. (Strasburg had Tommy John surgery in 2010.) This decision has roiled up the Nationals fan base, thereby providing final proof of its actual existence. It has mystified Strasburg and, according to the Washington Post’s Tom Boswell, Strasburg’s father as well. (Back during the All-Star break, the younger Strasburg famously said that the team would have to “rip the ball out of my hands” if they wanted to sideline him at the end of the year.) And, discussing the matter during a Red Sox–Yankees telecast over the weekend, Tim McCarver nearly went into orbit. To be fair, Scott Boras, Strasburg’s agent, has chipped in to support Rizzo — which is, of course, exactly the kind of support that fans adore. Strasburg is expected to pitch Tuesday night against Atlanta in the second game of the series that will determine if there will be an honest-to-god pennant race here, whether a Washington baseball team will stroll into the playoffs talking about Stephen Strasburg and not Walter Johnson. Unfortunately, looking out over this happy, if hopelessly generic, new ballpark, I can only think about what might have been.

OK, I admit it. I thought this team should be in Havana.

This was my golden dream. The franchise was rotting in Montreal like quarantined produce on a Japanese dock. Montreal kept producing wondrous talent that kept beating feet for the border. The team played in a monument to athletic overreach — the Olympic Stadium, built for the Summer Games of 1976, which Montreal is going to be paying off until somebody sells the city mining rights on Saturn. It was a dark, dank, and empty place, and pieces of the roof kept wafting down onto the outfield in the middle of games. And yet, despite the fact that they played their games in Castle Dracula, in 1994 les Expos were probably the best team in baseball, and then baseball decided in its infinite wisdom to stop being baseball. The World Series was canceled. Various improvised pharmaceutical enterprises wound up with a backlog of stock they couldn’t unload. The One Great Chance that the Montreal Expos had was deader than Montcalm. It became clear the team was going to have to follow in the footsteps of Pedro Martinez, and Randy Johnson, and a few dozen other star players who had left town. Major League Baseball even used the Expos as Exhibit A when it talked about “contraction,” the most appalling public lie in which MLB had conspired since the collusion days of the 1980s.

That’s when I had my idea. The Expos had developed a deep talent base of Latin American players. Martinez was the first of them, coming to Montreal in a trade to join Moises Alou, whose father, Felipe, managed the club. Vlad Guerrero and Jose Vidro came along later. Why not lift the franchise wholesale and move it to Cuba, where the enthusiasm for baseball continues to be wild and unrequited? Slap a stadium down along the waterfront. Call it The Ballpark at 26th of July Grounds. If you wanted to sneak a little more capitalism in there, you could call it The Jiffy Lube Ballpark at 26th of July Grounds, brought to you by Nissan. I was fairly sure that the elderly former pitcher with the beard would swing for it. I would have arranged for bargain flights from all over the Caribbean basin, and old-style bleacher seating for kids. It already made more sense than having two teams in Florida. I figured that a dose of capitalism that people enjoyed — Vaclav Havel never stinted in crediting the Beatles with helping bring down the Iron Curtain — would do more good than a hundred boycotts. To hell with Helms and Burton, I thought. Pedro and Vlad would break the iron shackles of historic tyranny. And, also, I would have a substantial cut of the ancillary income, so there was that, too.

When people started talking about moving the Expos to Washington, I laughed. Why give Our Nation’s Capital another baseball team for it to ignore? It already had lost two of them in 30 years, much to the delight of fans in Minnesota and Texas. But, people would argue, shouldn’t Our Nation’s Capital have a hometown representative in Our National Pastime? Yes, I would reply, and Washington has one: the Redskins. However, Major League Baseball didn’t see it my way. (“I got vision,” Paul Newman’s Butch Cassidy sighs at one point, “and the rest of the world wears bifocals.”) They moved the team to Washington anyway. The city’s taxpayers got blackjacked for the ridiculously expensive ballpark that sits like a huge tin corral along the shores of the District’s second-biggest river, surrounded by all that promised “neighborhood development” that, at this point, consists in the main of chain-link fences hung with banners promoting things that aren’t built yet. Improbably, fate has a good laugh at my expense and the best team in baseball plays here. And, somewhere along a seawall in Havana, gulls cry a longing cry, and my retirement income goes out with the ceaseless tide.