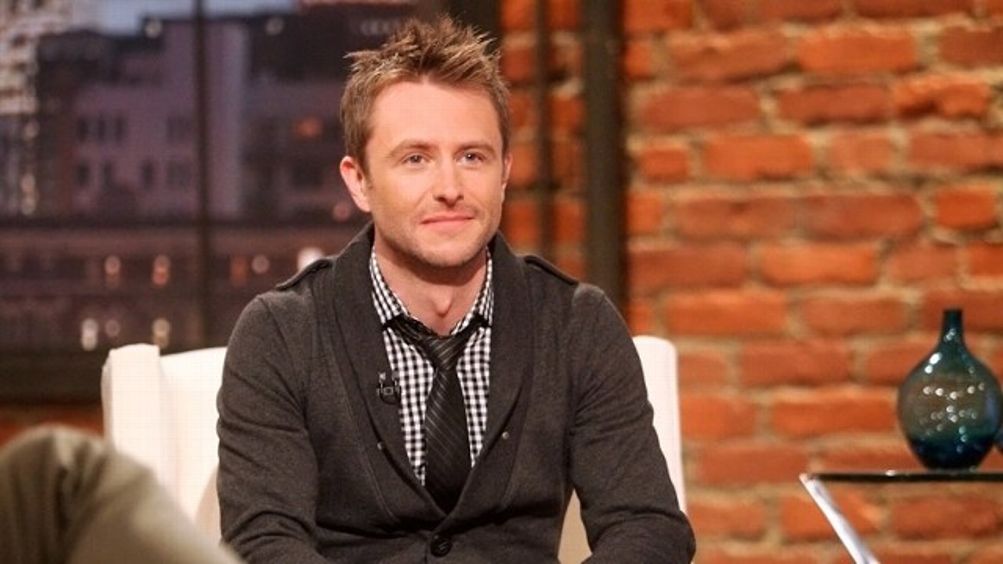 Chris Hardwick is an amiable guy. He’s quick with a quip, great at moving a conversation along, and remarkably resilient. Not everyone’s career can survive playing second fiddle to Jenny McCarthy. (Even fewer can survive that haircut.) An amenable actor and a decent comedian, the 41-year-old Hardwick’s true gift is enthusiasm. Over the past few years he’s parlayed private fandom into very public success with his Nerdist Industries, a web-based hub celebrating geeky indulgences of all stripes. The main attraction is Hardwick’s own podcast, in which he cheerfully softballs leading lights of comedy like Will Ferrell (“This was a tremendously huge thing for me! I’m just all grins now!”) and Tina Fey (“One of my contemporary idols … I am in complete awe of her!”). Chris Hardwick is undeniably likable. But the main reason people like Chris Hardwick is because he likes things too.

And television has taken note. Since 2011, Hardwick’s been hosting Talking Dead, a stupefying chat show that airs immediately after new episodes of AMC’s The Walking Dead. An awkward, onanistic mash-up of the Chris Farley Interview and a Reddit message board, the show features Hardwick gamely interacting with a couch full of semi-sober stars, directors, and fans of the hugely popular zombie drama. No news is broken — a recent installment featured comedian Reggie Watts listening patiently while actor David Morrissey rhapsodized about the “great writing” given to his dim bulb character — and no criticism is brooked. The relentless cheer reminds me of a North Korean news broadcast after a particularly rousing speech by Kim Jong-un. Regardless of what one thinks of The Walking Dead — and I have a lot of thoughts! — its aftershow remains a strange exercise in picking clean the bones from an already ravaged corpse.

But here’s the thing: Not only is it cheap to produce, Talking Dead is a legitimate hit. In February, one installment pulled in 2.8 million viewers in the key 18-to-49-year-old demographic. It’s a number NBC’s hugely expensive scripted programming couldn’t match that night — or on any night that month. Hardwick has recently leveraged this attention into another show, The Nerdist, airing on BBC America. Low-cost and mildly diverting, the hour is a perfect complement to BBC America’s microtargeted lineup of Saturday-night sci-fi. Though the content is more free-form — the most recent episode featured Breaking Bad‘s Betsy Brandt making out with one of Hardwick’s Trekker pals — the strategy is identical to the one behind Talking Dead: to give people what they want and then drown them in it. No longer an upper-channel also-ran, BBC America has managed to create an ouroboros of interest,1 a cultural cul-de-sac that lures fans by giving them a new episode of Doctor Who and then traps them by applauding their exceptional taste.

Of course, there used to be another place to go for lively discussion among like-minded devotees, and you’re looking at it. After wrecking the music industry and scaring the hell out of movies, the Internet actually saved television over the last decade. As shows began to take greater risks with storytelling, content, and serialization, the web served as a bubbling water cooler for debate and a boiling pressure cooker for anticipation. The DVR may have freed us from the shackles of time slots, but Twitter — and an increasing phobia for spoilers — put us all right back in the cage.2 In many ways, the second screen has become just as important as the first.

The broadcast networks are hamstrung both by the scope of their mission — appealing to as many people as possible, at all times — and the archaic smallness of their profit engine: the pipeline of advertising dollars still controlled by the pronouncements of the inscrutable and outdated Nielsen ratings system. Their cable competition, buttressed and underwritten by the unstoppable flow of subscriber fees, has long been much more nimble. From the very beginning of the industry, cable has attacked the Big Four’s old-world unwieldiness with a commitment to niche, modeling its programming in the earliest days on the demographic principles of radio and offering a channel for every age and taste. But these days cable is exhibiting a renewed commitment to narrowcasting that divvies up an already diminished pie even further. The rise of Talking Dead and BBC America’s “Supernatural Saturday” suggest that cable is no longer merely relying on the Internet for buzz, it’s actively using it as a model. Life online has taught us that everyone is a nerd for something, and while BBC America seems to have cornered the market on nerd-nerds, there are still plenty of other slots to fill, even with the biggies like sports nerds (ESPN),3 food nerds (Food Network), and schadenfreude nerds (the hapless CNN) already off the board. Because now the mandoline is set to slice even finer: There’s MLB Network and Fox Soccer Channel for truly devout jocks, Cooking Channel for epicurious gourmands, and, for those particularly devoted to watching others suffer, Bravo has a clinic open for you in nearly every city.

Hitching your programming wagon to a rabid, preexisting fan base is a smart way for an identity-starved channel both to get noticed and to separate itself from an increasingly crowded pack. It’s a tack currently being attempted by IFC, which on the back of the quasi-success of Portlandia4 has transformed itself from the best option to catch Little Miss Sunshine at four in the morning to the go-to place for alt-laughs; consider it Comedy Left-of-Central. In May, Marc Maron’s quasi-autobiographical Maron will join the upstreamed podcast Comedy Bang! Bang! amid the comforting blanket of Arrested Development reruns. And last week IFC took the bold step of announcing eight on-brand scripts it has in development from stand-up types unknown to the world at large but beloved by those who pay attention to such things, including a sitcom from YouTube-adored lady duo Garfunkel & Oates, a project from UCB cofounder Matt Besser, and something from culty NYC godhead Chris Gethard. None of these are guaranteed to make it to air, but the slate does make clear that any aspiring wit with a halfway decent Funny or Die reel can at least get a meeting. It’s a risky, though not unreasonable, assumption that the reigning currency of the web — not bitcoins but passion5 — must be monetizable in some appreciable way.6 And while being thought of as a channel that only caters to a highly specific, highly subjective aesthetic has its drawbacks — as those responsible for the short-lived Pipe Enthusiast Network (PEN) can attest — none of them are worse than IFC’s previous situation, which was not being thought of at all.

But let’s be honest. Cheering on a viable programming strategy is like tipping your cap to Lex Luthor. Just because these moves are working in the short term doesn’t necessarily mean they’ll stay that way. And they certainly don’t guarantee good TV shows. Despite what physics nerds and suburban planners say, you can’t keep subdividing things forever.7 The transformation of the cable landscape into a shallow ocean teeming with niche piranhas has already taken a major bite out of the broadcasters. (Poor NBC is being nibbled to death before our very eyes: USA’s brand is NBC in the 1980s, TBS and TNT are splitting NBC in the 1990s. As for NBC in the 2000s? Spike’s working on that.) But the results of all this incessant gobbling are fewer and fewer choices for a broad-minded viewership to chew on.

Investing in the cultivation of small-batch enthusiasts like a hipster distiller creates an audience, but it also creates an expectation of satisfaction in said audience. This self-congratulating relationship can lead not only to more employment opportunities for Chris Hardwick,8 but also a closed circuit of mediocrity. On the Huffington Post this week, Mo Ryan praised Syfy’s latest effort, Defiance, for actually attempting to be a “smart, well-crafted TV show” in addition to featuring the expected lineup of aliens, ray guns, and cheaper Canadian soundstages. But just a week earlier the network had unveiled a development slate of nine nearly identical-sounding space dramas with an announcement that read more like geek mad libs than a press release.9 The truth is, fan service can all too easily curdle into condescension when deployed by the cynical.

The Internet is wonderful when it satisfies your interests, but worrisome when it allows you to filter out any and all dissent. While I’m all for subsidizing underserved fan bases — attention, weirdos clamoring for a Dynasty-style soap filmed with repurposed baby dolls: IFC has you covered! — I can’t help but wonder if TV, by chasing narrowcasting down the new-media rabbit hole, is stratifying itself into creative limbo. After all, the most compelling series of the past 10 years, like the stomachs of fat zombies, have contained multitudes. Amid the smoke and monsters, Lost was often wildly romantic; Mad Men can be funnier than any sitcom; and despite being a comedy, Louie is frequently the saddest show on the air. Television, at its best, is unclassifiable and unpredictable; part of the allure is watching talented people take giant creative leaps without any knowledge of where it may take them and who might be awaiting them there. Minimizing potential failure by removing this uncertainty may seem like playing it safe, but in the long run it’s the opposite: If this delicate slicing and sub-slicing of audiences continues, eventually even the most visionary programmer is going to cut nothing but himself. By investing only in things guaranteed to be liked, cable networks seem willing to accept the possibility that nothing they do in the future will ever really be loved. I’d say it’s a risky plan, but then again it’s worked out pretty well for Chris Hardwick.