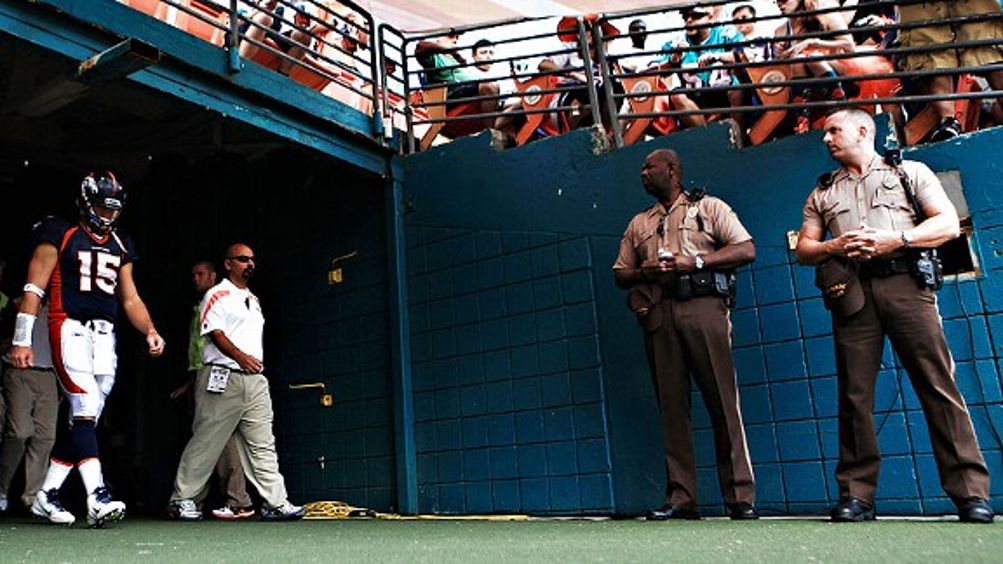 Here’s how I think it works, this Tebow madness.

I’m not a churchgoer, personally. But even for me, Sunday’s Miami-Denver game was a harrowing existential ride. For about three quarters, Tebow floundered, and it looked like the Living Water Bible Church out on Route 17 was wrong about pretty much everything. (Just as I suspected!) Then he rallied the Broncos for a heroic comeback and, d’oh, it seemed like there might be a god in the universe after all. And people called the win “overhyped”!

It’s not as though, pre-Tebow, the NFL was lacking religiosity. I’m pretty sure Reggie White was actually a character in the Bible.3 And every sideline reporter has lived through this scenario —

SIDELINE REPORTER: What defensive adjustments did you make after the half that let you stop the run so effectively in the third quarter?
MIDDLE LINEBACKER: I thank Jesus Christ my personal Lord and Savior thine be the glory baby [kisses finger twice, points up at sky]

— so many times that they must all be terrified it’ll start to happen in their regular, non-football lives:

SIDELINE REPORTER [at the UPS Store]: Does the 12-box jumbo pack come with bubble wrap?
UPS STORE CLERK: Hey, I just wanna give a shout-out to the Prince of Peace, Jehovah, my shepherd, everything I am is how He made me and all I do is for His name.

But Tebow’s religiosity is different. For one thing, the public narrative of the Christian athlete normally involves a grown-up conversion experience: Deion Sanders on the Damascene Road. Tebow, by contrast, has been coming at the world with his own personal Good News since college, when he was still dewy from youth group. The son of missionaries, he always seemed religious in a way that, say, Kurt Warner didn’t.4

The evangelical movement spends a lot of money and time coaching its kids on how to confront secular culture, but the kids don’t usually reach a position at which they can confront it on a national-media scale — not as kids, anyway. But then here was Tebow, the quarterback at Florida, this articulate, successful young guy who was prepared to test all those techniques before a mass audience. He was calm. He was patient. He was totally committed, with the Bible verses on his eyeblack and his self-confessed virginity, but you never got the feeling he was judging you.

Instead, he was just respectfully taking in your mistakes and waiting to help you make a better call. At 20, he was America’s camp counselor at a camp half the country never meant to attend.

Tebow self-consciously presented himself as a defender of the faith, filming anti-abortion commercials, flying around the world to help with his parents’ missions. A lot of athletes have been religious advocates or preachers over the years, but they’ve generally acknowledged some token separation between their private faith and their public lives, even if the line often blurs. Reggie White appeared in ads opposing homosexuality, but not until after he retired. Tebow, on the other hand, gets press for circumcising Filipino babies. A trillion words have been written about this already, but suffice it to say that if you see him as the avatar of muscular Christianity in football, you know that in his bland, smiling, placidly self-confident way, he sees himself that way, too.

I’m sure there are people who manage to escape the demographic rooting pattern this creates. But in broad strokes, it’s fair to say that how you feel about Tebow depends on how you feel about youth groups and Elisabeth Hasselbeck and, I don’t know, WWJD bracelets and raft retreats with a lot of bonfires and swaying. Other religious players are religious individuals; Tebow is a whole culture. It helps that, as an NFL player, he’s both nontraditional and kind of bad, which makes it easy to see his success as guided by a higher power — if a dude with that background and that throwing motion completes a touchdown pass, it almost has to be a miracle.

Whenever I catch one of Tebow’s games, I tend to lose sight of the scoreboard and just focus on the metacompetition, the weird Joan of Arc drama that seems to go along with everything he does. I imagine a bar under a train station somewhere where the relevant ideas men gather to learn their fates. Did a receiver drop a pass? James Dobson just choked on a nacho. Did Tim throw an interception? Daniel Dennett just chest-bumped Richard Dawkins. Again, I realize that this is stupid, that it’s beyond stupid, but compared to actually watching the Broncos? It’ll do.

I find myself half-consciously rooting for Tebow to fail, even though I have nothing against him, have lots of religious friends, am not especially tribal by nature, and wouldn’t want to be responsible for the nacho-related deaths of any prominent evangelical leaders, even if I detest their politics. Doesn’t matter. The part of me that wants to eat pork and not stone people just switches on and cheers for the blitzing linebacker.

There’s a problem with this, though, a problem that I’m convinced lies at the heart of the minor cultural puzzle that Tebow represents. The problem is that if you’re rooting against Tebow because he’s religious, you’re giving way to the trial-by-combat impulse. And the whole idea of the trial by combat is that there’s a higher power adjudicating the combat. It means something for the blue knight to kill the green knight only if God is moving the swords. So what I, many secular football fans, and Imaginary Daniel Dennett are really rooting for is for God to make Tim Tebow fail as a means of discrediting Himself, God, in accordance with our wishes, and against His, God’s, own interests.

This — arguably — doesn’t make a whole lot of sense.

Other religious players are religious individuals; Tebow is a whole culture.

For the sake of argument, let’s say that the universe is radically meaningless. If that’s the case, then when Tebow wins, it’s a fluke that doesn’t prove anything. When he loses, it’s also a fluke that doesn’t prove anything. For his losing to mean anything, it has to tie into some larger cosmic order, and if it does, then it can’t prove that there isn’t one. Since no one really knows whether the universe is meaningless or not, things rapidly grow confusing. Tebow scoring a two-point conversion on an off-tackle power play could prove that Jesus rose from the dead on the third day, or it could, well, not. Tebow’s getting picked off after telegraphing a pass could doom us to a state of terrifying metaphysical uncertainty, especially if we are the Broncos’ quarterbacks coach.5 But if you’re against Tebow, you can’t read too much into Tebow’s failures, or else Tebow has already won.

From a theological standpoint, it’s so hard to say what you’re actually rooting for and how it aligns with specific on-field outcomes that it almost seems to make more sense not to bring religion or politics or philosophy into the NFL, or maybe any sport, at all. But then what the hell have we been watching?

Previously from Brian Phillips:
Patti Smith, the Curator of Rock ‘N’ Roll
Ronaldo vs. Messi
Noooo-klahoma!: The misery of rooting for the Oklahoma State Cowboys
The Problem with Novak Djokovic
The Brash Style in American Tennis
Corruption, Murder, and the Beautiful Game: On FIFA’s scandalous history
The Long Autumn of Roger Federer