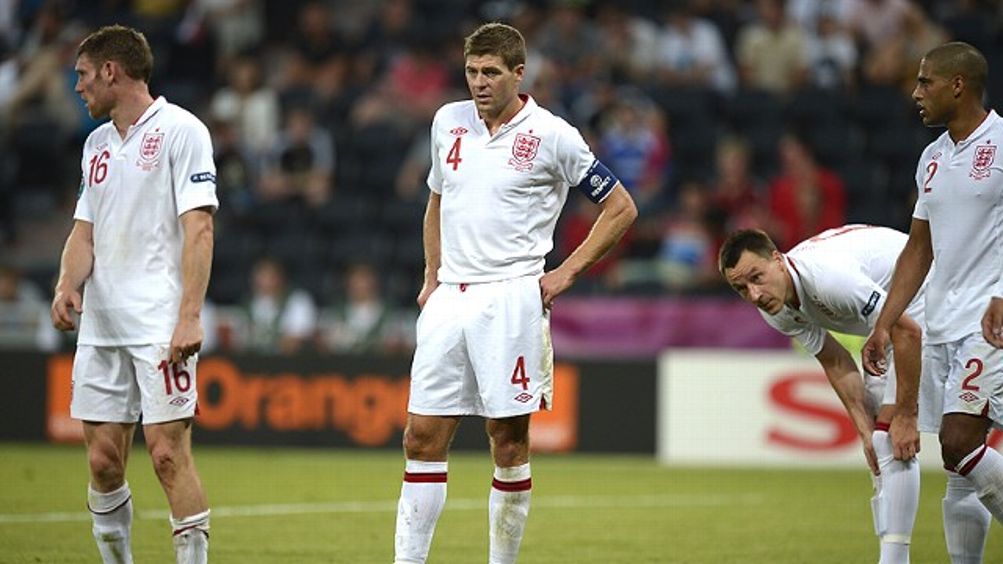 The English national soccer team is, as of this writing, located in Krakow, Poland, its official stamped-by-UEFA “Team Base Camp” for Euro 2012. England’s hotel in Krakow, the Stary, was “revealed” in November via a press announcement from the Football Association. It was then re-revealed last week via the FA’s official YouTube channel, FATV (“Football’s Home”), or more specifically via an “exclusive” synth-y corporate down-tempo waiting-room video mostly devoted to slow pans over billiards tables and shots of boxes sliding into focus.

This super-careful double rollout of what ought to have been trivial information was the product of hard experience. In 2006, England spent the World Cup dissipating in the spa resorts at Baden-Baden, giving birth to frenzied tabloid stories about £3,000 Moët bills and chinchilla-maddened photo spreads of WAGs team-sauntering down shopping-district sidewalks in Spice Girls outfits, some worn by actual Spice Girls. The resulting decadence and overstimulation were widely blamed for England’s disastrous performance in the tournament. Four years later, the FA went the other way, booking the team into an isolated hilltop camp in Rustenburg, South Africa, where a bored Wayne Rooney described his routine as “breakfast, train, lunch, bed, dinner, bed.” Wives and girlfriends were not invited.

So the choice of the Hotel Stary, a relatively modest, five-star downtown hotel near Krakow’s central square, was intended to convey that the FA was compensating for its previous overcompensation, putting the team up in rooms that were neither too glamorous (and thus distracting) nor too isolated (and thus demoralizing). There would be billiards tables, but not frangipani wraps. Every detail was designed to do two things: (1) act upon the psychology of the English footballer in such a way as to render him capable of not disgracing the home country on the soccer pitch, and (2) reassure an apprehensive nation of pundits, newspaper writers, podcasters, newspaper podcasters, bloggers, tweeters, and pubgoers that the English footballer’s psychology was being so acted upon.

Cesc Fabregas Would Like You to Water the Lawn

In case the above doesn’t make this clear: It’s just possible that England’s problems go beyond the hotel issue. It’s possible, in fact, that England’s problems go beyond the whole issue of England’s physical existence. The sheer volume and ferocity of response to every tiny question involving the team sometimes make it seem as though England is only a hysterical projection of the national psyche — that the players, managers, administrators et al are trapped in what Seamus Heaney once called “Englands of the mind.” They don’t live in hotel rooms, they live in tabloid arguments about hotel rooms, and in arguments about those arguments.

That sounds excessive, but think about how weird it’s been, for years, to watch England actually play. How did this timid, painstaking, sometimes-pretty-good-but-other-times-pretty-bad unit wash up out of the tsunami of narrative that got it here? It’s almost impossible to see what’s taking place on the pitch; everything done by, say, John Terry comes with its own heads-up overlay filtering it through branching levels of reaction and interpretation across multiple media. Wayne Rooney loses the ball (WAYNE MAN) and goes tearing after it down the left flank, where Ashley (CASHLEY) Cole briefly wins it back (BEST LEFT BACK IN THE WORLD) before misplacing a routine pass to Steven Gerrard (CAN’T PLAY WITH LAMPARD), and there’s a cutaway shot of the manager standing unprotected in the rain (NO WALLY WITH A BROLLY HE), and then somehow (ENGLAND’S BRAVE JOHN) Terry recovers his positioning (TEAMMATE-CUCKOLDING RACIST) in time to knock the ball forward to Rooney (SHAGS GRANNIES), and Rooney (HAIR REPLACEMENT) slides it back to Gerrard (WILL KILL FOR PHIL COLLINS), who plays a neat 1-2 enabling Rooney (CHEATS ON CHAV WIFE) to score (ROO-PERB!), granting England the 1-1 draw (BUT CAN THEY ONLY PLAY ROUTE ONE/4-4-2/ON A WEDNESDAY NIGHT AT STOKE?) and a lifeline in the tournament (UTTER DISGRACE). A spaceman could have watched England’s opening-game tie versus France in Euro 2012 and seen a careful team trying hard to avoid mistakes against a slightly superior opponent. For earthbound soccer fans, there’s always this blizzard of artifacts.

Well, every team generates hype. The difference in England’s case is that the magnitude of the hype,1 combined with the team’s chronically unspectacular play, creates some unique psychological effects.2 There’s the culture of the team itself, a mix of Total Celebrity and constant near-panic that’s maddeningly hard to describe — it’s all wrecked Ferraris and slurred masculinity, only haunted by the awareness that every single thing you do is being watched and judged in ways that youth and money can’t protect you against. Then there are the bizarre quantum concepts that make up the public identities of the players. Most of the time, media attention follows a recognizable arc: LeBron James is either a good guy or a bad guy, and while the transition between those roles can occur instantly, he’s only one at a time. With England, there’s not so much an arc as an infinite stack of parallel realities. Every possible statement about the team is being yelled at every possible moment,3 which leads to a kind of tabloidy negative capability: John Terry is always both a backstabbing racist and a hard-fighting embodiment of English resolve; Wayne Rooney is always both a savior figure and a national embarrassment. There’s no felt contradiction in this. That’s just the nature of the team.

The current England manager, Roy Hodgson, may be the least postmodern person in existence. He’s modest and practical, the sort of coach whose teams are always called “hard to beat” in a way that’s only slightly patronizing. The FA’s decision to hire him, when almost everyone expected the job to go to self-created media figment Harry Redknapp, was maybe its most canny bit of expectations-tamping since 1966. Hodgson is unimpeachable, but not the sort of manager you’d ever see winning a World Cup, while Redknapp is a quicksilver con artist who’d send hopes sky-high and then, I don’t know, sell the whole country to Denmark or something. Anyway, Hodgson has his team playing modest, practical soccer — two banks of four, quick counters, the type of game that reliably lands you in quarterfinals. Against France, Scott Parker threw himself around, the players mostly stuck to their roles, and the young starters, Alex Oxlade-Chamberlain and Danny Welbeck, looked bright, as young players often do for England. It was probably a good sort of soccer for a team that was missing Wayne Rooney through suspension. Not to mention one that, as Alexi Lalas pointed out on ESPN after the match, no longer has any real reason to think of itself as elite.

But it’s a strange fit, frankly, for the 10-inch-headline whirlwind where England lives. At this point, England is less interesting as a team than as a vision of sports media, the logical result of setting Stephen A. Smith loose in a hall of mirrors. Is this where the rest of us are heading? What happens when the conversation about the thing overwhelms the thing it’s supposed to be a conversation about? Hodgson needs his team to stay calm, to be the eye of the gossip/rage hurricane. But the whole point of the eye of a hurricane is that there’s nothing there.