Coldhearted: A Visit to Nashville 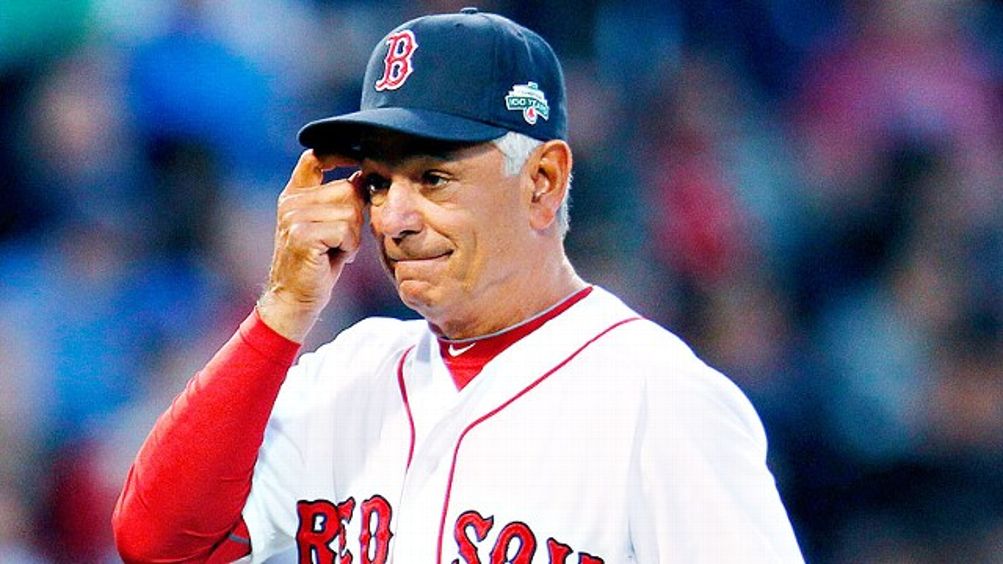 It was a strange ragbag of a weekend at Fenway Park, and one that ultimately was truncated to the great blessing of the home team. Anytime the Yankees come in, the basic Ballpark Phony count goes sailing into the red zone. But, what with this being the official, no-kidding, sorry-about-the-Titanic-and-all-that, 100th anniversary of the place, you couldn’t swing a Mizuno without hitting someone you’d likely never see on Jersey Street again. Unless, of course, you were actually a member of this year’s Red Sox, in which case you likely could take three healthy cuts on an outbound Green Line MBTA train at rush hour and endanger exactly nobody.

(The big celebrity hit was Caroline Kennedy, who, as one of the three people chosen to throw out the first pitch on Friday afternoon, proceeded to wind up left-handed and throw it through Carlton Fisk. It was scored as a passed ball.)

To be entirely fair, they did up the anniversary celebration very well. They invited every former Red Sox player and/or manager to participate, and over 200 of them showed up. Notably absent were Wade Boggs, who had a charity golf tournament to attend in Florida, and Roger Clemens, who had a retrial to attend in federal court, and Manny Ramirez, who had a previous engagement in another dimension. Former manager Terry Francona, whose departure after last season was attended by some truly revolting anonymous calumny out of the Red Sox front office, and who originally announced his intention to stay as far away as possible, did finally relent and got a huge ovation. (“I thought I was doing well,” said Kevin Millar, who was the public Id of 2004’s gang of idiots. “Then, Tito came out and it was like this big engine started up.”) The players gathered in roughly the positions on the diamond that they had played during their days with the team. Johnny Pesky and Bobby Doerr, both in their 90s, were wheeled out by Jason Varitek and Tim Wakefield. “Seeing them,” Millar said, “that was what did it for me.” It was a touchingly democratic tableau of living history, Carl Yastrzemski standing in the outfield next to LaSchelle Tarver, who had a cup of coffee in the majors and wasn’t there long enough to finish it.

The ceremony, alas, ended with a hoked-up attempt at breaking a hoked-up Guinness Book of World Records mark for the largest single toast in history. This did not sit well with, among other people, veteran baseball historian Reggie Jackson. “Why not just announce the names, you know?” Jackson said. “Here’s Carl Yastrzemski, one of the best players ever. I ought to know, I played against him for almost 20 years. Here’s Carlton Fisk, waving the ball fair. Why end it with that thing?”

But nobody got a bigger hand than Pedro Martinez, who was one of the people leading the toast and who, when the history of the franchise is written (again and again and again) in 100 years, is going to be recognized as the heart and soul of an era that produced the first world championship in Boston since the park was new. “When they called my name,” he said, “I could remember the parade. The last thing I remember about being in Boston was the parade. Every time I come to Boston, it’s like being in a parade.

“My feeling here is unique to Fenway. The funny thing is, you can’t find it anywhere else. It must be the closeness of the people to you here. You mess it up, you’re going to hear it. You do it well, you’re going to hear it, too. You can feel the people breathing close to you. The only other place you can go to get that feeling? You got to go to winter ball [in the Dominican Republic].”

There always has been something of the philosopher to Martinez, whose sense of his place in the overall scheme of things has been calibrated carefully according to his own measure. He was asked if he thought about coming back out of retirement to pitch again, the way he did with Philadelphia a couple of years back. “I have achieved an awful lot in my career. Was it worth it to go through all that just to achieve a little bit more? I’d rather not.

Once they cleared the field of the various geezers, the second hundred years did not begin well for the home side. Starter Clay Buchholz got beaten like a gong, surrendering five home runs, the last of them a blast by Yankee catcher Russell Martin that nearly went through a billboard atop the seats in left field. This was the second time in 13 games that a Red Sox starter had given up five homers, which is as good a measure as any of why Boston is in last place and the Yankees are in first. The Yankees ended up winning, 6-2. The first play of the game was a Derek Jeter pop-up that had Dustin Pedroia fighting a high, midafternoon sun, and that was how the second century of baseball at Fenway Park began.

And, on Saturday, the second day of the second century of Red Sox baseball at Fenway Park, everything about the joint — including its bizarre and ineluctable karma — asserted itself with a vengeance. The Red Sox scored the first nine runs of the game. The Yankees scored the next 15 runs of the game. Nick Swisher and Mark Teixeira knocked in 12 of the 15 runs themselves, Teixeira with two home runs. It was a glorious, spectacular, damned near epic festival of thunderous pitching incompetence. There were at least four whitehaired gentlemen standing on the mound during Friday’s pregame festivities who could’ve stepped right in and thrown as well as anyone who came out of the Boston bullpen on Saturday.

Bobby Valentine — who, as my buddy Tom Keegan once wrote, had he known it was going to turn out like this, never would have invented baseball — got booed from hell to breakfast every time he changed pitchers, which was pretty damn often in the last three innings. He was also greeted with “We want Tito,” which, if things don’t turn around very, very soon, is going to become a Fenway tradition to rival parking-lot extortion, “Sweet Caroline,” and “Yankees suck.” I also suspect that mouthing “Wow!” on live TV in response to your team’s having fallen behind is not going to endear you to the home folks.

(Oh, and by the way, and I know it’s for the kids and all, and that it costs half-a-LeBron to go to the games here now, so you’re entitled to whatever entertainment you can find, but having an entire ballpark chant “So good! So good! So good!” immediately after the home team has given up 15 unanswered runs makes the fan base sound a little simple.)

“I think we’ve hit bottom,” Valentine said after the game. “If this isn’t the bottom, then we’re going to have to find some new ends of the earth or something.”

I have no idea what that means, either, but the man looked like he’d just been repeatedly struck by lightning, so we should cut him some slack.

The Red Sox bullpen, which now has an ERA nudging nine, was something to behold. Handed a shutout, two Boston relievers gave up five earned runs apiece. Alfredo Aceves, the team’s erstwhile closer, because they had not yet abandoned the lunatic notion of making Daniel Bard a starter, gave up a pair of two-run doubles, and now has an ERA of 24.00. As much fun as the fans are going to have chaffing Valentine, at least some of which has its roots in the ungracious way that Francona was shown the door last autumn, he’s been handed a staff of relief pitchers who at this point shouldn’t be allowed to walk close to open flame.

The primary victim in all of this was one Felix Doubront, a 24-year-old lefty from Venezuela, who pitched six innings of better-than-solid baseball for the Red Sox, striking out seven and leaving in the sixth inning, having thrown only 99 pitches, with a 9-1 lead. (Doubront gave up Teixeira’s first home run, which, at that point, looked completely harmless.) By all statistical measures, it was the best game of Doubront’s career. He then went back to the clubhouse, showered, iced down, sat on a sofa, and watched the roof cave in.

“I didn’t see the [seven-run] seventh, because they were showing the guy in Chicago who was pitching the perfect game,” Doubront said. “But I saw all the rest of it. I mean, what are you going to do? These things happen. This is baseball. I deserved better. I know that, but I’m with my team. I feel good because I pitched well, but I don’t feel good because we lost, and the way we lost. You feel like, you know, when you pitch well and come out, that’s my game. That’s the way you feel.”

No team in the history of baseball needed a rainout more than the Red Sox did yesterday. A major soaker of a storm came up the Eastern seaboard, washing out the game by mid-afternoon, much to the disappointment of thousands of viewers who were dying to hear what new ESPN commentator Terry Francona might have to say about the previous day’s Krakatoa. In addition, the postponement canceled a start by Bard, which gives Valentine another four or five days to come to his senses and put Bard back in the bullpen where he belongs. And, finally, the Bruins beat the Washington Capitals in overtime to force a seventh game in their Stanley Cup playoff series, so the Sox had all the diversions they needed as they slunk out of town.

Perhaps this is a good thing. Right now, the Red Sox don’t even look like a team that’s pretending to contend this year. They look overmatched by the Yankees and, a recent series with the Rays notwithstanding, they don’t look as good as either Tampa or Toronto. Maybe an obvious rebuilding year or two will bring them back to being simply a baseball team again, and not a vicarious time machine for Ivy League nostalgics and slumming politicians. Maybe a couple of years on the margins of contention will wring some of the Chuck E. Cheese out of the experience of a game at Fenway. The one thing that made the parade of former players worthwhile on Friday was the fact that it was so simple — a bunch of men of varying ages, wandering in from the outfield while generic movie music played in the background and everyone cheered. There seemed to be a common acceptance and celebration of the fact that what these guys managed to do with their lives in just making it to the major leagues is really pretty damned hard all on its own. They don’t need to carry everyone else’s memories on their backs, too. They don’t need to be part of the show of The Show. And everyone seemed to conclude that it’s the second century that’s the hardest.