Editor’s note: This article appears in the Oct.23 issue of ESPN The Magazine. 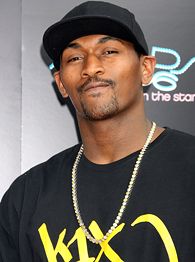 This has been a crazy year in pro sports. I mean that literally. Crazy. Call it the Year of the Loon. We spend inordinate amounts of time debating the mental health of players and nonplayers, well-known loons (T.O., Ron Artest, John Daly, Randy Moss, Stephen Jackson), recovering loons (Terry Glenn, Jason Williams, Rasheed Wallace), benevolent loons (Clinton Portis, Chad Johnson) and up-and-coming loons (Albert Haynesworth, Zack Randolph, Bonzi Wells, A-Rod). Everywhere you look, someone is acting crazy or something crazy just happened — it’s all crazy, all the time. One slugger has built up such a warehouse of erratic action, he’s earned his own catch phrase: “Manny being Manny.”

I’m not sure how we ended up here. When I was growing up, the athletes we considered “crazy” were relatively harmless. Darryl Dawkins was “crazy” because he named his dunks.

Mark Fidrych was “crazy” because he talked to baseballs. Lloyd B. Free was “crazy” because he changed his name. Nobody felt threatened by the old-school crazy guys, and they rarely undermined the teams they played for. Even Marvin “Bad News” Barnes, the craziest athlete of the 1970s, was eventually reborn as one of the decade’s most colorful figures, a potential Hall of Famer who had a blast while he threw away his career.

Barnes’ nickname was a term of endearment. Marvin wasn’t really bad news. (Well, except for the time he allegedly went after a college teammate with a tire iron.) Nowadays dozens of pro athletes compete for that nickname in an ongoing reality show, just without the cameras and story editors. For the past two years, I’ve had a running joke in my columns about the Tyson Zone, reached when someone has achieved such a degree of looniness that no story told about him would be unbelievable. He punched out an owner? Peed on a referee? Wrestled a polar bear? Of course he did. With these guys, the craziness ceiling has been removed. When Jackson discharged his gun outside a strip club because someone was trying to run him over in a car — that’s a classic Tyson Zone moment. We saw the headline “Pacer Fires Shots Outside Strip Club” and instantly thought, “Uh oh, what did Stephen Jackson do now?” 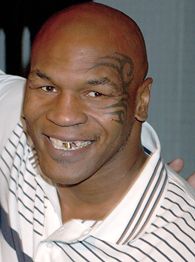 In the Year of the Loon, though, the Tyson Zone can’t hold everyone who deserves a place inside. We definitely need an adjective to cover us: Tysonic. The Tysonic sports moment of the decade was the Pacers-Pistons melee. But in just the past three weeks, we’ve had three more legitimately Tysonic incidents: T.O.’s non-overdose, Haynesworth’s stomp and Jackson’s hit-and-run. The sports scene has become so consistently Tysonic that poor Iron Mike can’t even get a pay-per-view fight. We don’t need him for our loony fix anymore.

For sports fans, the question is: How has this ongoing insanity changed the way teams operate? It’s clear the current abundance of Tysonia (look, it can be a noun, too!) always has decisionmakers thinking: “Should we take a chance on this guy?” After all, you can’t land an elite rookie without a high draft pick, and you can’t sign an elite veteran without cap space or payroll room, but you can always pick up an “eccentric” talent and hope for the best.

As I see it, some rules of engagement have emerged:

Rule 1: Consider the situation.
A scan of the data shows the greatest successes have come from talented loons who needed a change of scenery, moved to a winning franchise, seemed energized by their good fortune, then mellowed out because their competitiveness ultimately outweighed their craziness. Guys like Corey Dillon, Charles Barkley and Sheed wanted to win and didn’t want to screw it up for their new teams. By the way, this is the old Al Davis ploy. The Raiders were famous for picking up and mixing in characters in the 1970s and 1980s. You know, back when Al Davis was alive.

Rule 2: Always try to buy low and sell high.
Look at what the Celtics pulled off with the Ricky Davis trade. They landed him for spare parts, then salvaged his stock just enough so they could move him for a better player (Wally Szczerbiak) when he’d worn out his welcome. Perfectly played. Same for San Antonio, which took a flier on Jackson, won the 2003 title with him, then cashed out like a savvy blackjack player after a great run.

Rule 3: Once things self-destruct, there’s no going back.
When Philly got T.O., I wrote an extended analogy that compared him to a crazy girlfriend: Sure, things seem great for now and the sex is fantastic, but at some point, she is going to snap. It’s just a question of how many quality months you can extract from the relationship before you start getting the 4 a.m. call-and-hang-up.

In T.O.’s case, the Eagles nearly won a Super Bowl before he combusted, but they had to endure an extra season before they decided to pull the plug. Same for Artest in Indiana — after his yearlong suspension killed one season, the Pacers chose to keep him, and he killed another one. Loons are like stocks. As soon as they start free-falling, dump them.

Rule 4: One crazy guy is fine, but don’t give him other crazy guys to run with.
Loons attract loons, and once they reach critical mass, they’ll poison the clubhouse with their collective antics. Worse, they may turn on each other and engage in an ongoing
battle to out-crazy one another, kinda like Nic Cage and John Travolta in “Face/Off.” Ask any Blazer fan how this ends up.

Rule 5: Don’t offer financial security.
No question: You should only land crazy guys for short money. That way, the cap/payroll damage is minimal if you have to cut the cord. Plus, a loon is more apt to play nice if he’s playing for a big contract. Smarter loons instinctively realize big contracts are get-out-of-jail-free cards. No matter how crazy he acts, his team is effectively handcuffed.

Teams are finally wising up. Look at what happened to Bonzi, a genuinely talented player who couldn’t get a nibble on the open market last summer until the Rockets signed him for below market value. That’s the wave of the future. I hope. 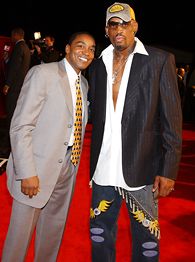 Rule 6: When it’s time to dump a crazy guy, target a GM who was a former star.
Why? Because guys like Larry Bird, Isiah Thomas and Kevin McHale think the same way: “Hell, I had crazy teammates when I played, and we could always rein them in.”

Not so fast, fellas. Those guys fell into line mostly because you were playing with them. Crazy guys defer to alpha dogs. Just look at Dennis Rodman: He walked all over David Robinson and the Spurs, but when they gave him away to Chicago, MJ kept him in check for three straight titles. That’s the biggest reason Owens didn’t make it in Philly: He didn’t respect Donovan McNabb or Andy Reid enough. I’ll be shocked if he respects Drew Bledsoe or Bill Parcells enough, either.

And when that situation self-destructs, the Tysonic Owens will find salvation in only one place: with the one franchise that has an alpha-dog QB, a hard-nosed coach and a winning climate to keep everyone in line. That’s right, my beloved New England Patriots.