Oden and the mailbag

Roll of the Daisuke

Editor’s note: This column appears in the April 9 issue of ESPN The Magazine.

My readers have sent me some crazy e-mails over the past decade. I’ve been invited to weddings, bachelor parties and high school proms. I’ve been asked to kill myself, have sex with myself and repeatedly punch myself in the face. I’ve received naked photos of girlfriends and had a corrections officer ask for my address so he could send me a used prison shank. Even crazier, I gave it to him. 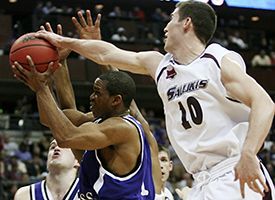 But no e-mail mortified me like the ones that came from Holy Cross after the basketball team’s latest March Madness loss.

I graduated from the Cross in 1992, my senior year doubling as the last undefeated season for the soon-to-be-emasculated football team. Our sports programs still meant something back then, even as the administration was cutting costs to get in line with Title IX and conceding our rivalry with BC, having recently joined the stuffy Patriot League (a homeless man’s version of the Ivy League). Over time, it turned us into a D1 school with a D3 mentality. Nobody takes it personally when we lose. The goal is to churn out decent teams with nice kids and high graduation rates. We try to win, but not really.

Fast-forward to that ugly game against Southern Illinois, in which we barely cracked 50 points, turned the ball over 20 times and suffered through a 3-for-21 shooting performance from our two best players. My old roommates and I weren’t depressed because this was the fifth straight NCAA Tournament loss we’d endured since we left Worcester, but because our team looked more overmatched than a high school boy on a date with Kim Kardashian. When I wrote that the loss was “embarrassing” and announced plans to “save” our basketball program, a few HC students admonished me for my lack of support. One wrote, “How is it that the program needs to be saved? Last I checked, it had been saved over the past decade.”

Saved? Did I mention we haven’t won an NCAA Tournament game since 1953? Sure, we’ve made four appearances since 2001, but only because the Patriot League gets an automatic bid. That makes it a disgrace when we don’t make the field; this is the league, remember, that is home to Lehigh, Lafayette, Colgate, Aquafresh and Crest. You think Bob Cousy and Tom Heinsohn were psyched that their alma mater made it all the way to the round of 64? You think the guys from the 1947 NCAA title team were relieved we lost to the Salukis by only 10? Please.

Now that full scholarships have been reinstated for basketball, and with only Bucknell challenging us for that automatic bid every winter, the Cross should be landing top New England recruits and emulating Gonzaga’s success out West … and yet, it’s not. You can’t blame the administration’s obsession with grades over sports; last I checked, it was even harder to get accepted to Georgetown or Duke. You can’t blame the students for turning into soccer moms; they weren’t there when the Cross was respected athletically and don’t know any better. You can’t blame coach Ralph Willard, who loses every blue-chip scholar-athlete to the Ivies and every big-time recruit to the Big East or ACC; he’s clearly a glutton for punishment. So what’s the problem then? When our men’s hockey team made the Elite Eight last year, it was a wake-up call. Back in my day, home hockey games were memorable only because we smuggled in beer and heckled opposing goalies. Now they’re stealing the winter limelight from the hoops team?

When I e-mailed my friends to ask for suggestions on how to save the program, one responded with this selling point: “Come to Holy Cross: Our former coach won a national championship as an assistant at UConn!” We’re not even bitter anymore, just sarcastic as hell. Still, we care enough to offer this eight-step plan to turn around our alma mater’s basketball fortunes:

1. Give one scholarship every two years to a stud recruit who has no business getting into the school. Even if he can’t read the scoreboard, we don’t care. Think of it as an investment: For 120 grand and a few professors looking the other way, we gain exposure, make some serious TV money and lift campus spirits. It worked for BC, it can work for us. 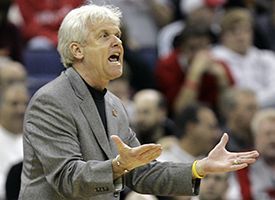 2. Replace Willard with a disgraced coach looking for a second chance, someone who doesn’t mind bending a rule or 10 to get the program humming. Think Todd Bozeman or Larry Eustachy. In exchange, the Jesuit priests can offer around-the-clock availability to take the coach’s confession. This is a guy who’d deserve to have his soul saved from eternal damnation.

3. Get the new coach a plane ticket to Cameroon. It’s apparently a basketball hotbed now — every mid-major seems to have one Cameroonian. So let’s get on that. “Coach Eustachy, you’re booked at the Cameroon Holiday Inn for the month of May. Go find us a rebounder.”

4. Remember when Swish dressed as a guy in “Fast Break?” We’ll convince a WNBA player to come back to school at the Cross as a “man.” I’d give you more detail on this one, but I can’t name a single WNBA player.

5. Pay Playboy big bucks for a “Girls of the Patriot League” spread. It’s just the kind of propaganda that lures potential recruits. Of course, we’ll outsource our posing duties to top models so our female coeds aren’t humiliated, suspended, stalked by Coach Eustachy or sentenced to eternal damnation. To help our cause, the other Patriot League schools will be “represented” by villagers from Kazakhstan, although Bucknell will be given the option to use its actual coeds.

6. Make me an unofficial “friend of the program.” Then I’ll start a pen pal correspondence the NCAA would frown upon with any top-200 prep prospect in the class of 2008 who e-mails me his address. Ever open an unmarked envelope that contained a wad of $100 bills? It could happen to you! Repeatedly. I want to be a booster. I want to break rules. I want to make a difference.

7. You know how Greg Oden is taking History of Rock and Roll right now? Well, Holy Cross has that class too, but why stop there? We need to make other additions to to our 2008 curriculum: Plagiarizing Other People’s Fiction, “The Hills” vs. “Laguna Beach,” Gum, Madden NFL 08 and BC’s Greatest Gambling Fixes.

8. In 2010, accept the Big East’s invitation to join their conference. So the invitation was extended in 1979. Belatedly, we’d be honored! Sayonara, Patriot League!

Yes, even I know this plan doesn’t have a shot. So here’s a more realistic one: Just last week, my buddy Bish, an Amherst grad, was bragging that his old school won the D3 men’s hoops title. Know what? I was jealous. And because that’s about as low as you can go — envying a D3 school — I now believe Holy Cross should drop out of D1 and join the well-respected NESCAC. What’s wrong with competing against the likes of Amherst, Middlebury and Williams? Aren’t those the academics-first schools we’re desperately trying to become? The truth is, we’ve belonged in that league for 15 years, ever since the People Who Run Holy Cross gutted the football team and killed school spirit to the point that students now e-mail alums telling them to take pride in a double-digit playoff loss.

Screw it, we’re joining the NESCAC. Now we just have to figure out who’s breaking the news to Heinsohn and Cousy.