The Two Lives of Zach Randolph 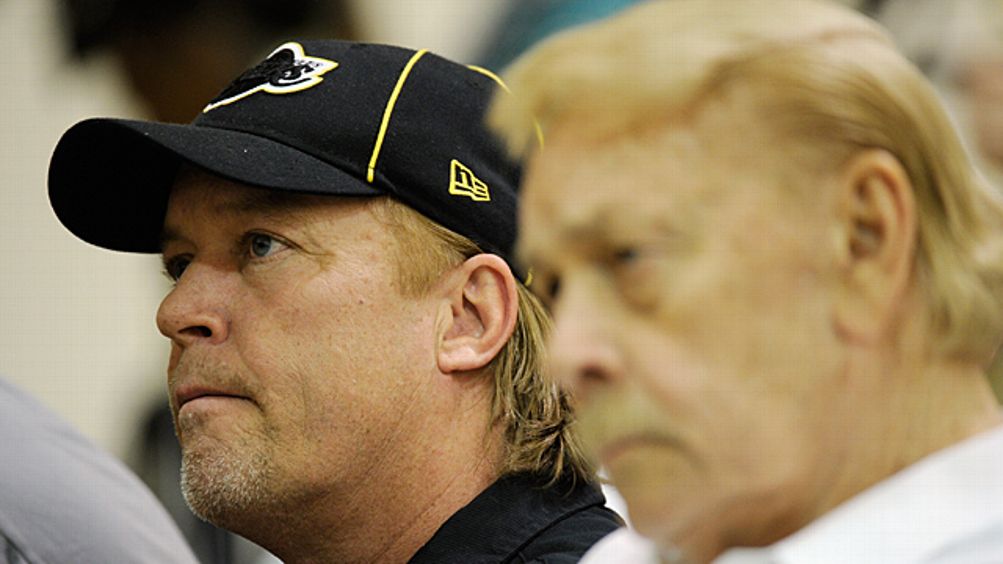 — Warren Zevon, “Desperados Under the Eaves”

There is really only one insurmountable problem for any sports fan — one problem that neither the fan nor the team itself can fix — and that is a bad owner. Bad players can be cut or traded. Bad coaches can be fired. Bad managers can be turfed out to their new careers as boring television announcers. Bad stadia can be torn down and new ones built — provided, of course, that the fans in question, in their other capacity as taxpayers, can be counted on to be such suckers that they shouldn’t be allowed to tie their shoes. Bad weather can be handled with a roof. But there is no solution to a bad owner.

Consider what you have to do to get rid of a bad owner. The owner has to be so bad that the team he owns is so bad itself for so long that you stop being a fan long before he finds some other rich fool to take the barrel of cholera off his hands. Or the owner has to be such an egregious public embarrassment that even the commissioner notices, and it is “suggested” that the bad owner decide that the team is taking up too much of the owner’s valuable time. This is what happened years ago to Marge Schott, who owned the Cincinnati Reds, when she wasn’t listening to the Horst Wessel play on her internal shortwave set. This, it hardly needs to be said, happens very rarely, because most commissioners are quite fond of their jobs, and they know for whom they really work. They’d rather move a team than fry an owner. Ask the NBA fans in Seattle whether or not that’s true.

(An aside: It bugs the hell out of me that I cannot cheer for the Oklahoma City Thunder, who are about as much fun to watch as anyone in the Association, because of the way commissioner David Stern stuck it to one of the most loyal fan bases in the league simply because that fan base declined to submit to blackmail and there were suckers to be found elsewhere. They ought to deliver Stern’s paycheck like a ransom drop for the rest of his life after that one.)

So the fan, poor sap, is out of luck. Waiting around for someone to develop competence in their dotage, or waiting around for someone to goose-step their way off the cliff, is no way to maintain enthusiasm for the home side. All that’s left is to howl at the moon, or to take it out on the players on the field. Think of the reaction of the Brits when scurvy colonials bought Manchester United — or, to be fair, the reaction in this country when Nintendo bought the Mariners. Outrage! Anger! LOUD NOISES! And none of it mattered.

And this is not a column about Jeffrey Loria, the chop-shop owner of the baseball team in Florida who just sent half his roster to Canada because his fans, exercising their capacity as taxpayers, declined to buy from him a bag of magic beans on the way to market. Loria’s too big a fish and the barrel is far too small. Instead, this is a column about the Buss family of Los Angeles, who control the Lakers, and who, I think, may be in a category all their own, not as bad owners and executives, though they haven’t had the best 2012, but as eccentric owners and executives, which can be worse.

To me, anyway, Jerry Buss, paterfamilias, has always existed in a kind of weird West Coast bubble, a blinged-out rubber person whose tenure as an owner of the Lakers has been one long run of success, and one long run of rosters that seem to lead from Los Angeles right to Springfield with very few stops in between. At the same time, of course, Jerry, whose daughter, Jeanie, is both the team’s executive vice president for business operations and the girlfriend of Phil Jackson, organized (and, for a while, enthusiastically participated in) a rolling sybaritic carnival that made Tiger Woods look like a dead Methodist. (In 2007, Buss got busted for DUI in a gold Mercedes-Benz in the company of a comely 23-year-old passenger. Buss was 74 at the time.) In the 1980s, when the Showtime Lakers were playing the Celtics seemingly every spring, we lost souls from the older, less swinging part of the country would get to spend five days in and around the Forum, and luxuriate in just the most fantastic rumors you ever heard, many of which later turned out to be true. This must have been the easiest recruiting pitch anyone ever laid on free agents: Come to L.A., play on a great team, every night, in front of adoring — and adorable — fans, and then, as soon as the final buzzer sounds, it’s I, Claudius at the owner’s manse. Hard to believe Kareem wanted to leave Milwaukee for all of that.

The Lakers have had a golden history ever since they decamped from Minneapolis. They have had remarkably long runs of success with some of the game’s biggest stars interrupted only by brief bouts of mediocrity. (By comparison, the Celtics, the only real historical rivals the Lakers have, have had long runs of success interrupted by periods of abject failure. The post-Russell teams were horrible, and the post-Cowens teams were even worse.) The natural climatic and carnal advantages that L.A. had over most of the rest of the stops in the NBA made the Lakers a destination even before free agency came to the Association, and in a way that Boston never could be. And that was the tradition on which Dr. Buss doubled down when he bought the team in 1979, just in time for Magic Johnson to show up and become the prototypical Showtime Laker in every way, including, ultimately, the tragic.

But what Jerry never really seemed like was an owner. He had so many natural advantages that he seemed more like the distant absentee proprietor of a particularly gaudy set of toys. Jerry West seemed more like an owner, and so, later, did Mitch Kupchak. Jerry Buss appeared to be more involved in creating the cultural context within which everyone could enjoy the success of the team he seemed to build and rebuild so easily.

Now, though, there are other destinations in the Association. There are other places to play, and other places to, well, play. Miami comes immediately to mind. Even though Jeanie has had an active role in running the team for several years, Jerry, while remaining the majority owner of the Lakers, has handed off most of the daily management to his second-oldest son, Jim, and things have not gone well at all. Over the past year or so, as the Lakers began to slide into the opening penumbra of the post-Kobe era, the younger Buss began to make bad decisions followed by panicky ones. Mike Brown never was the right fit out there, and half the people in the Association knew it. So the Lakers start slowly this year and out the window goes Brown before Thanksgiving. There is a clumsy public flirtation with Phil Jackson that, remarkably, goes nowhere. Suddenly, and apparently to the surprise of the man himself, Mike D’Antoni gets the call. This is not the smooth, gilt-edged crystal way the Lakers do things. This is the way the Knicks do things. This is the way the (gasp!) Clippers used to do things. By the end of the week, Magic himself was tweeting his dissatisfaction with the way Buss fils was running his old team.

Sorry, Earvin. You’re a fan now. You can’t do any more about Jim Buss than I once was able to do about the incredible passel of clowns who passed the Patriots one to another for almost 30 years. But, in a sense, I agree with him. I don’t want to see the Lakers go run-of-the-mill on me. California was the first paradise on the far horizon. It was the golden prize at the end of the frontier and was, in fact, the place where the frontier went to retire and then to die. Playing the Lakers — or, god knows, playing for the Lakers — used to be a kind of reward you got for all the nights in February when you had to slog from Milwaukee to Cleveland to Chicago to Portland, back in the days when the NBA’s travel schedule seemed to be designed by howler monkeys.

The Lakers can never be ordinary. The Lakers need to be bright and loud and glimmering in all manner of excess. They should drip with diamonds and sin. They should be the place in L.A. where Raymond Chandler and Ice Cube find common ground. Weary gumshoes and flashy young musicians and the people who follow both of them. Hot winds and cool jazz. Los Angeles always was a summation of America, and so, always, were the Lakers. For the Lakers to become ordinary is a reversal of the natural order of things, and if the legacy of the Buss family is that the Lakers become merely another stop along the road, then the whole league loses something. And there’s nothing that any of us can do about it.