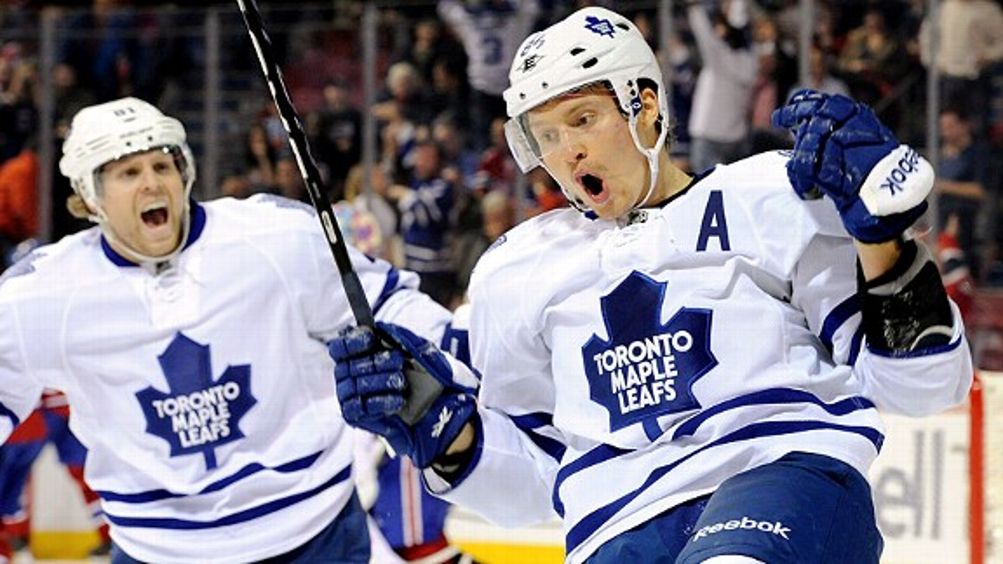 Score a goal, record an assist, and get into a fight, all in the same game? You’ve just completed the Gordie Howe hat trick.

Pick up an assist, add an overtime goal against a team that drafted you — indirectly leading to the NHL’s first firing of the season — and then reignite the ever-simmering league-wide debate about player safety and equipment? (We’ll give you the span of two games to do this one; it’s a lot.) After this week, we’ll call this move The Mikhail Grabovski.

The oddly productive stretch for the Toronto Maple Leafs forward jokingly dubbed “Crosbovski” last year by a teammate began Saturday with the Maple Leafs down 4-3 midway through the third period against the Canadiens in Montreal. Grabovski assisted on a Nikolai Kulemin goal to tie the game at four. And when the game went into overtime, he pulled out a beauty of a crease-hugging spin move that gave the Maple Leafs the 5-4 win over his former team.

The loss dropped the Canadiens to 1-4-2 on the season, a record made even worse when the Habs fell 2-1 to the Florida Panthers two days later. The team’s dismal start meant that Montreal had officially gone longer without a second win than it had in any season since 1941-42. (For a franchise so obsessed with its own long-ago history, this may have particularly stung.) The media began questioning whether coach Jacques Martin — and his infamous “System” — might be the first on this season’s NHL chopping block.

Well, shortly before the Canadiens took to the ice Wednesday to play the Flyers, the hammer finally came down — not on Martin, but on his longtime assistant coach and close friend, Perry Pearn. (Martin reportedly tried in vain to talk general manager Pierre Gauthier out of making the decision.) It’s been suggested that Pearn, whose responsibilities included the team’s power play, was punished for the extra-man unit’s 3-for-32 start. I don’t profess to be an expert on the appropriate hierarchy of blame within Montreal’s coaching ranks, but the move seemed to come as a general shock1 — it felt a little bit like shooting a hostage’s dog, and you wondered whether the skate sharpener or the massage therapist might be the next one to take the fall.

Indeed, Gauthier’s comments read a little bit sinister: “There were some eyes opened wide,” he said, describing the team’s reaction when he told them just 90 minutes before the game that their assistant coach would not be on the bench. “I didn’t talk to them very long, but the message was that things need to change.” The Habs responded by powering to an unexpected 5-1 win over Philadelphia, which irritated me a little: I just hate when these half-baked Scared Straight schemes actually work.

As for the former Montreal Canadien, Mikhail Grabovski, whose overtime goal did its small part on Saturday in setting this all in motion: The man’s work was not yet complete. On Monday, his stick connected with the face of the Flyers’ Chris Pronger during a follow-through on a shot and sent the veteran captain running off the ice screaming and clutching his eye. (Early indications are that he’ll be out for several weeks recovering from a sliced eyelid.)

The ugly scene revived the perennial debate over whether the league should mandate that players wear visors. The NHL currently “strongly recommends” that its players wear the extra equipment, but doesn’t require their use; Darren Pang reported last night that 61 percent of the league’s athletes (among them stars like Alex Ovechkin, Sidney Crosby, Steven Stamkos, and Pavel Datsyuk) opt to wear the eye shield. Others, however — whether fighters who feel the visor will become a nuisance, or players who have gone without the additional protection for the entirety of their careers — bristle against making it mandatory. In 1979, the league began requiring all players who signed pro contracts after June 1 of that year to wear a helmet, grandfathering in grizzled vets who chose not to change.2 It’s possible we could eventually see a similar phasing-in of visors, as well.

Either way, it was quite the influential week for Grabovski, who before the season began told Yahoo’s Dmitry Chesnokov that he would score “29, or 39, or 49” goals this season. Asked why the odd number, he responded: “There should be one missing from the round number. Because there should always be a motivation to do better.” Regardless of how many goals he scores, you have to give him credit for leading the league in versatility.

At the start of practice on Monday, Chicago Blackhawks coach Joel Quenneville made his team work on some shootout drills in response to the team’s woeful early performance in the “skills competition.” (In two shootouts comprising six individual tries, all on home ice, the team had failed to score even once.) The effort paid off the next day in a game against the Anaheim Ducks, who ended up in a shootout:: First, Jonathan Toews got the puck past goalie Jonas Hiller, and then Patrick Kane sealed the win with a one-on-one score of his own.

But it wasn’t his shootout goal that left everyone whispering “that was NASTY” — it was an assist that came earlier, right around the game’s midway point. Kane’s perfectly executed spinorama pass across to Marian Hossa left agape Ducks defensemen and viewers alike. I bet the guy pulls a mean “Hey, what’s that over there?” before eating your fries.

Honorable mention goes to the tic-tac-toe passing by the New Jersey Devils that was capped off by Patrik Elias, and these dekes by Tampa Bay’s Marty St. Louis that were dirty enough to undress one of the league’s top goalies.

After losing the Atlanta Thrashers, here comes another huge bummer for hockey fans in the Southeast: The University of Alabama in Huntsville has demoted its hockey program from Division I to club level, effective after this season. Joe Yerdon’s impassioned and well-informed rant is the essential read on the subject, sparing no one his anger: “This was a hired hit and one that the leaders of the CCHA, WCHA, NCHC, and Big 10 all helped bring about,” he writes. “This is what the college hockey landscape turned into — one that saw schools turn on each other to save their own skin and left the weakest of the litter out to starve.” Adding insult to injury? UAH is the host school of this season’s NCAA Frozen Four.

After getting off to a good start, Flyers goaltender Ilya Bryzgalov has fallen into a bit of a mini-slump. Still, even when losing, the affable and honest netminder can always be counted on for a winning quote — even if it comes at the expense of the easiest of targets:

“You probably would love to stay home once in a while too, instead of go here and write something, right?” he ribbed a cluster of sportswriters in a sound bite posted by Philadelphia Sports Daily.“Ask some questions from the players, same over and over again, just change the name. … It’s a very boring life for everybody, for you guys, for us … practice, game, practice, game, sleep, game, practice. You write, you ask questions, sit at a computer, write answers.”

Ah, those Russians … they really know how to make anything sound totally bleak.

Previously from Katie Baker:
Coming to Grips With the Winter Classic
The Endless Battle Over Hockey Fights
Week 1 in the NHL
How to Pick an NHL Team
Coldhearted: Our Weekly Hockey Column Debuts
Wedded Blitz!: A sabermetric analysis of the September New York Times wedding announcements
The Timetable: Sidney Crosby’s Lost Year