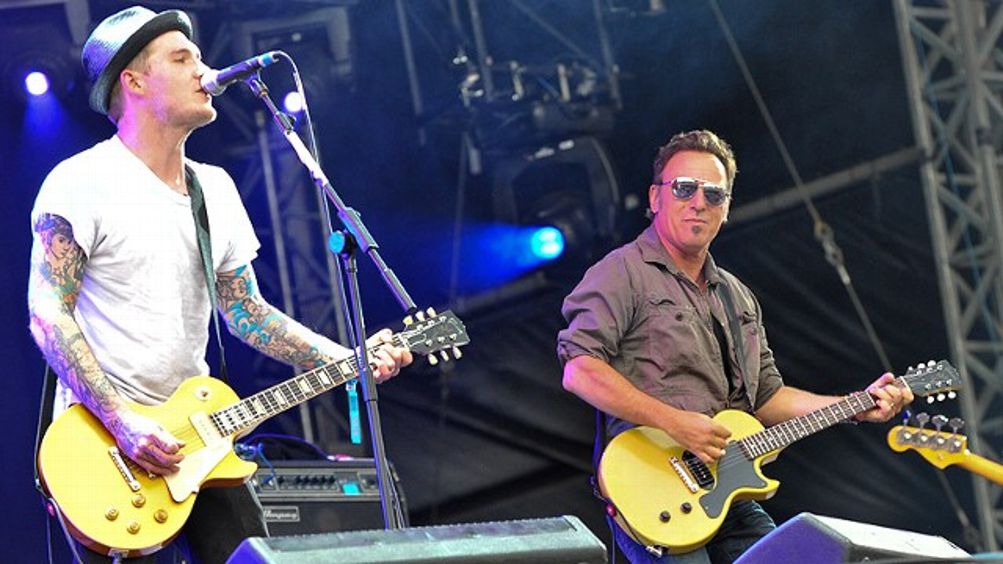 Pop music, like college or a quasi-religious hippie death cult, is where people go to become themselves. Pop can be an avenue for reinvention. That’s what it was for Lizzy Grant, a folk singer from Lake Placid who stepped behind a curtain and reemerged as an undead ’50s sex bomb in star-spangled undies named Lana Del Rey. It also runs in the opposite direction, where Frank Ocean living his life in an open and transparent fashion can be a cultural statement that elevates his art. Or pop might simply be a forum for figuring these things out one way or the other. In Usher’s words, countless pop songs boil down to a simple theme: “looking 4 myself.”

In the parlance of this year’s pop music identity questers, Brian Fallon of New Jersey heartland arena punk quartet The Gaslight Anthem started out as an Usher, tried to pass himself off as a Frank Ocean, but — on his band’s new album, Handwritten — ended up as a Lana Del Rey. If you care at all about this guy as a songwriter and potential standard-bearer, this is a pretty disappointing development. For a brief period, Fallon wrote better than anyone in rock about how songs can map out the geography of your heart if you squeeze them down deep enough. His own songs were frequently good and often great, but what really made them burn and sparkle was their embedded promise for something really outstanding on the horizon, beyond the hero worship. That hasn’t happened with Handwritten, and there are troubling signs that Fallon’s skills have stunted and even atrophied. His songs have come to embody identity issues they once merely documented.

Let’s state the obvious: Brian Fallon Single White Female–izes the hell out of Bruce Springsteen, sometimes to the point of anachronism, and even if you like the guy’s music (and I do) this has finally become impossible to reconcile on Handwritten. Now inevitably paired with Brendan O’Brien, Bruce’s record producer from 2002 to 2009, Fallon has made Handwritten a lurching, boilerplate slab of meat-and-potatoes jutted-jaw rock. The few remaining links to Gaslight’s punk roots have been forcibly removed and replaced by Hammond organs and “sha-la-la” sing-alongs. And, sweet Jesus, does it drag at times. One track, a particularly phlegmy number called “Too Much Blood,” the best of three consecutive mid-tempo songs that drag down Handwritten‘s interminable middle section, sounds like Rick Rubin doing one of his career rehab jobs on John Cafferty.

Handwritten isn’t bad musically, exactly. Fallon is too talented a craftsman of outsize rock songs for that to be true. (He did put “anthem” right in the name of his band, which isn’t empty boasting.) The album’s lead single, “45,” is disappointingly non-representative of Handwritten‘s main ingredients, but it’s still the best song here, kicking off the record like a recommissioned family Taurus peeling out of a suburban cul-de-sac past curfew. “Here Comes My Man” is the record’s chewiest Springsteen bite, but it’s also pretty fantastic, with a chiming guitar hook and bombastic drumbeat that O’Brien gives some of that old Magic sheen. Even some of the colorless, boring songs, like “Biloxi Parish,” which cross-engineers soaring U2 guitar with fat “Mutt” Lange banshee rhythms, are occasionally rousing in a Pavlovian, fireworks-on-the-Fourth-of-July sense.

The problem with Handwritten is that it seems just a little bit phony, which is probably worse than being bad, because Fallon has a lot invested in the “honesty” of his music. (In “Too Much Blood,” he worries that he’s actually being too honest, because that’s the kind of man we’re dealing with here.) When Fallon sings, yet again, about feeling big feelings while flippin’ around the radio dial, like he does in “Mae” and the zippy title track, it fails the bullshit test. Sorry, dude, but you grew up during one of the worst eras for rock radio ever. There’s no way you romanced Mary or Betty back in the late ’90s to the dulcet sounds of Mudvayne. It’s more likely you fell in love with Mackenzie or Taylor while downloading a torrent of Rancid albums.

As Japandroids showed just last month, there’s still juice left in rock’s bygone fantasyland, where legs wrap around velvet rims with nary a titter. But you only get to revisit that well so many times. Fallon got his fill four years ago on The Gaslight Anthem’s excellent second album, 2008’s The ’59 Sound. “I always kinda sorta wish I was someone else,” Fallon sang in the album’s best song, “High Lonesome,” and he kinda sorta came close to being that special someone on the rest of the record. Though he was a relatively mature 28, and sang in a manly rock-guy croon that purred like a Harley in heat pumped full of motor oil and Budweiser, Fallon’s lyrics made him seem much younger. He was a dreamer with a head filled with “classic cars and outlaw cowboy bands.” He repeatedly referenced songs by Springsteen, Tom Petty, and — most tellingly — the terminally unfashionable alt-era roots rock outfit Counting Crows, which had broken out in similar fashion 15 years earlier by leaning on classic rock posturing and openly fantasizing about being someone “just a little more funky.”

On The ’59 Sound, Fallon’s Walter Mitty–esque tendencies were forgivable. He was clearly a fan, and as fans do, he was draping himself in his record collection as a kind of shield against insecurity over an unformed sense of self. This fandom filled the space where Fallon’s personality was supposed to be, and it more or less worked. Fallon wore those lyrical nods to rock giants as studiously as the black leather jacket he donned on the album’s cover, like he was trying to absorb them into a permanent new exoskeleton. In Fallon’s mind, he was probably trying to be “real” by adopting well-worn signifiers of realness, but it was his naïve lack of realness that was touching. That is, unless you’re the sort of person who’s never tried to dress up like a record jacket photo.

The ’59 Sound was a transitional record for The Gaslight Anthem. When I saw the band play live in 2009, in front of one of those huge, Warped Tour–style band-name banners, the audience was a mix of 16-year-olds and middle-aged true believers between Hold Steady gigs. The kids were there for the furiously uplifting and energetic tunes that Fallon wrote to accompany the soiled-bandanna white-guy rock fantasies that had seduced the oldsters in the house. I imagine those 16-year-olds were mostly bored by 2010’s American Slang, where Fallon allowed all the Springsteen comparisons that followed in The ’59 Sound‘s wake to completely overtake his band’s aesthetic. Suddenly, bar-band soul and ’50s rock crashed the party. The pacing turned ponderous. Most alarmingly, Fallon’s voice appeared to age about 30 years. His weathered, bowels-torturing affectations were already distracting enough in his lead vocals, but he made sure to overdub more of them in the background, creating his own Greek chorus of pseudo-Bosses.

On Handwritten, Fallon has gone full-on craggy. But he’s forgotten to emulate the one thing about Springsteen that makes him Springsteen and not Bryan Adams or the “Life Is a Highway” guy: specificity. Springsteen’s songs take place in a mythical, unreal New Jersey, but it’s his New Jersey, and he has the details both lyrical and spiritual — from the horsepower of the hero’s car engine to the untimely pregnancy that ruined his girl’s life — to put you right in that world with him, riding shotgun. Fallon’s songs are composed of scraps from Bruce’s junkyard. They sound secondhand, no matter how vigorously Fallon grunts to the contrary.

The time has come for Fallon to stake out his own territory, and he moves in that direction on Handwritten‘s final track, “National Anthem.” Over some spare, mythic acoustic chords, Fallon sings about how he will never forget “my American love.” Specifics still elude him, but at least he’s dropped the bluster. What’s left is the longing. “I already live with too many ghosts,” he sings. The first step to solving a problem is admitting you have one.