Who will wear the AL crown?

Time for beer, brats and Favre

With “Madden 2005” hitting stores tomorrow, here’s my annual plea for someone to make this a holiday. No male under 40 should have to work on the same day that “Madden” is released. It’s not fair. Just give us one day to spend the requisite 12 hours setting up our franchise, making shady trades so we can find room for the best three free agents, picking our playbooks and audibles and everything else. That’s all I ask. 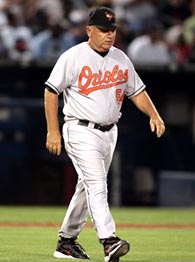 Actually, I’m not sure why I’m complaining: I did this, anyway. The good people at EA Sports mailed me the Collector’s Edition of “Madden” two weeks ago. I’ve been playing it ever since. For the sixth straight August since we’ve been together, the Sports Gal is threatening to break up with me — although it’s scarier now because we’re married, we’re living in California and she would end up with 50 percent of my assets. She does make some solid points though. Here were three of my favorites:

2. “I can’t even look at you right now. You’re almost in your mid-30’s. It actually makes me angry just to look at you.”

3. “I’m afraid to take a bath right now because I’m going to come out, you’re going to be playing Madden, and then I’m going to have to stab you to death.”

Again, some solid points. But here’s the thing … I don’t care.

For one thing, the Video Pats have never been this good. The Super Bowl champs are a wrecking machine, unlike two years ago, when they got screwed over in the player ratings (really the biggest insult of that nine-month “They were lucky to beat the Rams” stretch). Since “Madden” placed an emphasis on defense this season, all of this year’s starters are in the mid-80s and 90s. They also turned Brady into the next Joe Montana, which means you can roll him out to either side, have him throw on the run and he still unleashes these frozen ropes that hit receivers perfectly in stride. The only thing that’s missing is Bridget Moynihan sitting in the stands and doing the Brigette Wilson-Sampras “Jump up, smile and applaud after every good play” thing.

And then there’s Corey Dillon, the guy I used to trade for every August just to see how he would look in a Pats uniform … and now he’s actually ON the Patriots. Has a Madden trade ever sprung to life quite like this before? It’s uncanny. I’m getting emotional just writing about it.

So what’s different about this year’s game? It’s just … it’s better. It’s like they listen to everyone’s problems with the previous year’s version, make a list of complaints, then spend the next nine months working out every possible kink. Not only have I been playing it for the past two weeks, I begged EA to send my buddy Gus a copy so he could play it for two straight weeks — since he’s the only person I know who took a team in “franchise mode” and kept flipping it over through the year 2019. By the way, he has a wife and two kids. Warrants mentioning.

Anyway, here’s what we came up with: 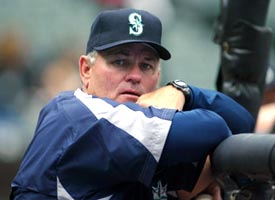 1. More realistic game play
They spruced up the computer pass defenses, making it more difficult to throw — hence, more three-and-out drives and less sustained possessions. And you don’t have a ton of time to throw — the Geoff Gallo Era of “Circling backwards, moving around, then heaving it 50 yards downfield up for grabs” is long gone. Realistically, you have about three seconds to make a decision. You can lose your confidence pretty quickly. In one exhibition game against the Eagles, backup QB Rohan Davey (the Dan Marino of NFL Europe) came in for me and tossed up a 6-for-29 with 3 INT’s. He did everything but take a giant dump at midfield.

2. More realistic player movement
They improve this by about 12 percent every year. Now it’s getting creepy. For instance, Chad Johnson caught one over the middle on me where he did the “Skidding across the field on one knee, hauling in the low pass, then rolling over to hold onto the ball” thing. Good God. Pretty soon, these guys will be picking up cheerleaders at halftime. I also liked the way running backs move. Remember the old days? If you check out the three retro versions — and yes, there are three old versions of the game that you can play included in the Collector’s Edition (I’m guessing from ’88, ’96 and ’00) — the players originally moved at 90-degree angles (north, east, south, west). Eventually they added 45-degree angles. Then 20-degree angles. Now they move like real players — no angles whatsoever.

3. More realistic punt returns
This is from Gus, the only person I know who routinely returns punts for TDs:

“In eight seasons on franchise mode on Madden 2004, Deltha O’Neal had about 40 punt returns for TD. This year it seems like about 90 percent of time you have to fair catch, which is far more realistic. You can line up in punt block formation and when the CPU brings his flyers in from the outside to block, you can audible to a return formation and this gives you a better chance at getting a return. But so far Champ Bailey is only averaging about 8 yards a return in 12 games.”

4. Better tackling, tougher audibling
In defense, they added a “hit stick,” which allows you pull a Chuck Bednarik on ballcarriers if you have the right player (like Rodney Harrison for the Pats, a one-man wrecking crew). And Gus loves the sweeping ankle tackle where the ball carrier lunges forward and falls down. It’s the little things.

As for the audibling, I didn’t even notice this, but that’s why we have Gus around: “I like the change of not being able to audible until you are under center. Plus the QB steps out from behind center to audible, making the whole process a little more time consuming, so audibles deep into the play clock are dicey.”

6. An ever-growing stable of non-game elements
I haven’t tinkered with this stuff yet because I’ve been busy playing the game. Gus loves this stuff, though. Here’s what he reports: 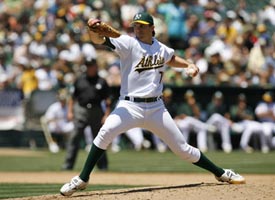 “New off-field features include emails from players, coaches, general managers, owners and a research department to keep you informed on everything about your team. There is also a radio show hosted by Tony Bruno that supplies league information, asks trivia questions and has actual interviews with legendary figures like Paul Edinger. And you can also read local newspapers and a national paper for information about your team and others. The national paper is lacking a Rudy Martzke column where every week John and Al would be credited with “strongest comments” and “say whats?”

One more note: Supposedly, they improved the hot routes and added a “defensive playmaker” mode — so you can drop a linebacker out of a blitz and have him spy on the QB, stuff like that — but since they didn’t include instructions when they mailed us the games, neither of us had any idea how to use these things. I’m not complaining. Just passing it along.

We didn’t like everything. For instance, the training camp was too hard; they still don’t have halftime highlights (where’s Howard Cosell and the Monday Night Football music????); and the game still takes too long to load. I enjoyed the predominantly hip-hop soundtrack much more than Gus did. We both liked the Madden Cards, as always. We’re upset that drug test suspensions haven’t been incorporated yet, and that there wasn’t enough time to add Ricky Williams and his 98 rating to the free agent pool. And we miss Video Pat Summerall more than words can express … those random moments when Video Pat suddenly belted out, Bone-yall… with the kickoff. Instead of having Pat filling in for ESPN this fall, couldn’t they just use Video Pat and do everything with CGI? Would anyone be against this?

Eight other things we thought the game was missing:

1. A feature where we could play chess against noted chess aficianadio LaVar Arrington. You know, just to have it.

3. They should add the random heartbeat/unsteady controller combo for big plays, like how they do it in the “Tiger Woods” games. And the pace of the heartbeat/unsteadiness should vary depending on the player. Like, if you’re playing the Colts, and you’re controlling Peyton Manning on a fourth down in the fourth quarter, the controller should be jumping around in your hands like you’re trying to hold on to a freshwater marlin.

4. A halftime report hosted by Lisa Guerrero and Eric Dickerson. 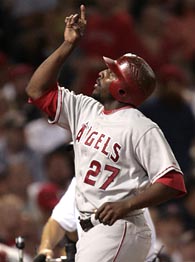 5. For the training camp, there should be a feature where you’re Ricky Williams, you just found out you have to take a drug test in 12 hours, and you’re out of that de-cleansing juice — now you have to drive around downtown Miami and look for it.

6. A weekly segment where you control Alex Flanagan on “Monday Night Countdown” as she visits player’s houses, interviews them, then fends them off as they try to hit on her.

7. I think Vinny Testaverde should have a zero rating. Gus thinks it should be in the 20s. I’m telling you, zero would be better — just for comedy’s sake. But realistically, his mobility is a zero out of 100. His accuracy is a zero. I guess he’s about a 25 in arm strength. Everything else would have to be between zero and 10. That should make him no higher than an “8.” For some reason, the “Madden” people have him in the 70s. It’s inexplicable.

8. When you go for it on fourth down and Video Madden makes those snide comments like “I don’t know what they’re thinking here — I wouldn’t do it,” you should be allowed to subtly electroshock him.

By the way, Gus heard a rumor that the Super Bowl celebration was dramatically enhanced this year. Not sure if it’s true. Regardless, we’re racing to see who can win a Super Bowl first.