Running with the Madness, Part II

Oden and the mailbag

Editor’s note: This column appears in the March 26 issue of ESPN The Magazine.

Please sit down before you read the next paragraph. I mentioned its contents to a bunch of friends, and everyone had the same reaction. First they laughed and said, “No, that’s not true.” When I spelled out the facts, there was dead silence, followed by the words “No, no, no, no … ” Finally, they either passed out from shock or tumbled backward into a chair, where they remained for a few minutes muttering to themselves, trying to make sense of their life and everything that has happened in it. I don’t want that to be your fate. So make sure you’re sitting. OK, here we go … 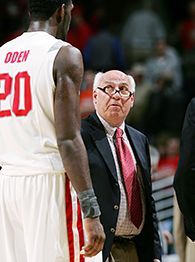 Billy Packer has provided color for every Final Four game and every NCAA championship game since 1975.

(You OK? Need a glass of water? All right, let’s keep going.)

Throwing in the fact that he’s been assigned to the most prestigious regional each March, it’s safe to assume that, of the 100 greatest college basketball games since 1974, Packer has announced three-quarters of them. Watch ESPN Classic when it shows a famous March Madness moment this month: Bird-Magic, Villanova-Georgetown, Duke-UNLV, Lorenzo Charles’ dunk, C-Webb’s timeout … seriously, name a memorable game, and you’ll undoubtedly see Packer standing there before tip-off with that look on his face. His reign of saltiness has featured plenty of play-by-play partners (Curt Gowdy, Dick Enberg, Gary Bender, Brent Musburger and Jim Nantz, to name five), two networks (NBC, CBS) and an ongoing reluctance to crack jokes or entertain viewers in any way.

Say what you want about the guy, he’s one of a kind. He loves dissecting strategies and understands the sport as well as anyone. He’s always impeccably prepared. He has a knack for pointing out things before they happen. His arguments are usually well-reasoned. And he certainly doesn’t sugarcoat his opinions and isn’t afraid to take an unpopular stance. In fact, every February and March, you can count on three things: Valentine’s Day, spring training and Packer’s turning himself into a national story, as if a little alarm goes off to remind him, “Wait, it’s getting close to spring and I haven’t ticked anyone off yet.”

Packer actually started early this year, making headlines for downplaying the vicious Gerald Henderson elbow that broke Tyler Hansbrough’s nose in the ACC’s last regular-season game, adamantly maintaining that the blow was unintentional even as the replays repeatedly defied him. Like always with Packer, it wasn’t the opinion as much as the way he expressed it: He was condescending, stern, inflexible. In Packer’s world, he’s always right, and everyone else is always wrong. Unless they agree with him.

Does Packer jump-start controversies intentionally, or does he just possess a natural knack for riling us up? We know it’s been happening since the late 1970s, when Packer ridiculed Indiana State’s credentials to be a No. 1 seed before the 1979 tourney, then famously chewed on some crow when the Sycamores reached the final. (You might remember him pulling the same routine with the Elite Eight St. Joe’s team three years ago.) He apologized for making sexist remarks to two female ushers before a Duke game in 2000 and for calling Allen Iverson a “tough monkey” in 1996. He caused a ruckus at his own network by ripping “60 Minutes” in 1998 and 2002 and by blaming the NBA over the years for raiding the NCAA talent pool and destroying the college game. Lately he’s been criticized for haranguing the NCAA selection committee, interrogating members on Selection Sunday like a DA attacking a defendant in a capital murder case. Everything backfired last March, when he ridiculed them again, this time for including too many Missouri Valley teams, and two of them made the Sweet 16. In classic Packer fashion, he never acknowledged the irony.

Here’s the problem: Packer loves basketball a little too much. He doesn’t grasp its entertainment value simply because he can’t see it. He’s too busy wondering why a coach won’t switch to a 2-3 zone or why a team has stopped pounding it inside or why they won’t foul to stop the clock when they still have two to give. Trapped in the nuances of the game, it’s like Packer has stumbled into the giant maze in “The Shining” and can’t escape. When NBC teamed him with Dick Enberg and Al McGuire in the late 1970s, McGuire’s sense of humor balanced out Packer, loosening him up while enabling his nuts-and-bolts routine to shine. That’s why they’re remembered as one of the best TV teams ever. For whatever reason, CBS has believed for 25 years (and counting) that Packer can thrive in a two-man booth.

You have to admit, it’s incredible that Packer has held the lead job ever since the Six Million Dollar Man and the Bionic Woman were America’s favorite couple. Back then, college basketball didn’t have a shot clock or a 3-point line, coaches carried themselves like drill sergeants and stars stayed in school for four years, rarely dunked and wore tight shorts that would have made Richard Simmons blush.

I mean, 32 years is a long time. Think how many different No. 1 NBA broadcasting teams there have been over that time. Think how many partners Keith Jackson has had. Think how many different pairings have called AFC and NFC
championship games, Super Bowls, the ALCS and NLCS, the World Series, even WrestleMania. Packer’s contemporaries in the longevity department (Tim McCarver and John Madden) started their careers in the 1980s and never had the same stranglehold on the big games. Like everyone else 40 and under, I can’t remember watching a crucial NCAA Tournament contest that didn’t involve Packer. At what point do we start calling him a monopoly?

And it’s not like Packer is Mr. Popularity; an astonishing number of fans across America fervently believe Packer has an ax to grind against their favorite team. At the 2005 ACC tournament in DC, Packer was honored for his body of TV work at halftime … and the arena booed him as if he were a WWE villain. And this wasn’t an arena filled only with Maryland supporters. In retrospect, it might have been the only time Duke fans and UNC fans agreed on anything.

Packer’s case is different, though. Many people (including me) believe he’s a humorless know-it-all and a curmudgeon, and we’re exhausted by his schtick. But because he announces the most important college games every spring, he can’t be avoided. Hell, these days, thanks to Janet Jackson and the seven-second delay for “live” events, we can’t even mute games and listen to radio simulcasts anymore — the audio never matches up. It’s Packer and Nantz or nothing.

So we’re left with two choices: mute our TV or grit our teeth. I’ve tried it both ways and found it’s more enjoyable to mute and listen to my iPod. That’s my plan through the title game. I’m doing it for my own sanity. No offense, Billy, but 32 years is more than enough.