Adam Carolla: The Future According to Action Movies 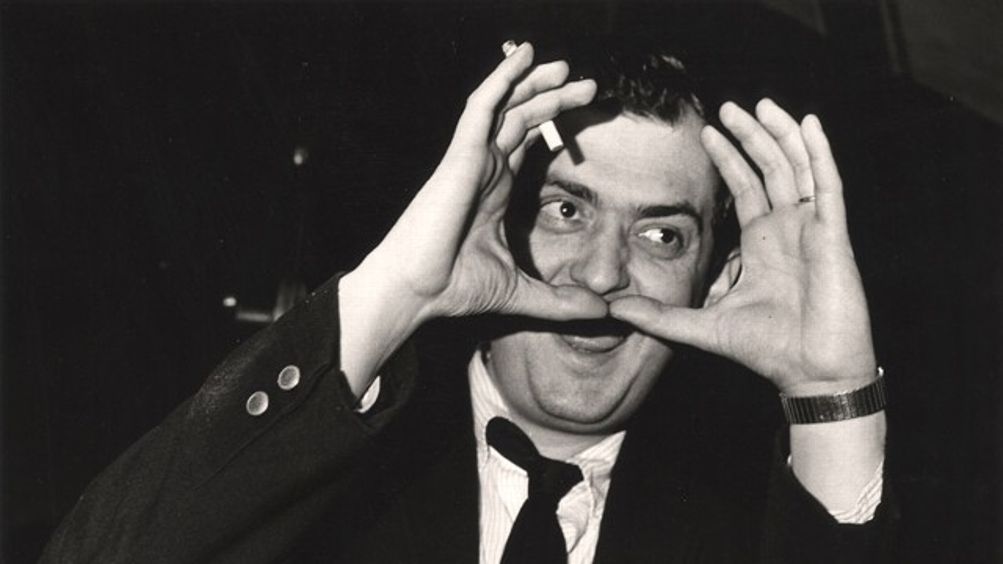 Stanley Kubrick died for the first time inside a New York City movie theater in 1952. He had just scraped together enough money and footage to complete his first feature film, an existential 66-minute war picture called Shape of Fear that would eventually be given a slightly more salacious title, Fear and Desire. Now the 24-year-old Kubrick was holding previews in the hopes of finding a distributor. According to Curtis Harrington, an experimental filmmaker who attended one of the screenings and later recounted the experience to Kubrick biographer John Baxter, “the film was not well received. There were giggles in the wrong places, and it all seemed overdone and overwrought.” Harrington later spied Kubrick in the aftermath of the disastrous preview, looking like Lee Ermey had just discovered his doughnut stash. There were tears in Kubrick’s eyes, he said. Years later, when the subject of Fear and Desire came up in a New York Times Magazine profile, all Kubrick could muster on his debut was a terse epitaph: “Pain is a good teacher.”

Sixty years have passed since Kubrick first unveiled Fear and Desire, and Kubrick has been dead for 13 of them. And yet, in whatever solar system the star-child incarnation of Kubrick is currently residing, he can’t be pleased that the black sheep in his filmography is now more accessible than ever. Last month, Fear and Desire was finally released on DVD and Blu-ray in a newly restored version overseen by the Library of Congress. It’s a must-see for Kubrick completists who haven’t caught it yet and are desperate to check this otherwise inessential and somewhat tiresome item off their lists. For everybody else, the most succinct assessment of Fear and Desire comes from Kubrick himself, who in a letter issued by Warner Bros. in the early ’90s called it a “bumbling, amateur film exercise” and “a completely inept oddity, boring and pretentious.”

Put another way, Fear and Desire is Stanley Kubrick’s cinematic equivalent of a bad high school yearbook photo. If you study its gawky features close enough, you can almost make out traces of the films that followed in its wake. Like Dr. Strangelove, it is about grand militaristic schemes short-circuited by human weakness. Like A Clockwork Orange, it presents a young man of questionable sanity engaged in a fever dream of violent impulses and sexual desire. Like Full Metal Jacket, it is an allegory about all war, rather than a story about any specific war. Like Barry Lyndon, it is impossible to watch after 9 p.m. for longer than 10 minutes without falling asleep.1 Unlike those movies, Fear and Desire is not a classic. Fear and Desire is not even all that good. Which is why, like a fluffy 11th-grade rattail, Kubrick tried to bury all evidence that Fear and Desire ever existed.

But Fear and Desire refuses to be buried, and I’m glad. Stanley Kubrick is still regarded as a chilly, intellectual, weirdo recluse perfectionist. Even people who love his films (like me) will concede that he examines the human condition with a level of empathy and affection most people reserve for the dandruff they flick off their shoulders. He has never seemed like a particularly human sort of human being. But that’s only if you’ve never seen Fear and Desire. For once, when Stanley Kubrick tried to be great, he failed. It proves that before he was The Monolith, he was an ape just like the rest of us.

As the chief engineer and promoter of the Stanley Kubrick mystique, Stanley Kubrick had good reason to keep Fear and Desire out of circulation. But now that Stanley Kubrick is gone, the work of Stanley Kubrick’s mystique-building falls to others. And it falls quite well to Room 237, a bizarrely entertaining new film Kubrick himself might’ve enjoyed, though he also would’ve wanted to sue the people who made it. A documentary composed entirely of footage from other people’s films — mostly Kubrick’s — Room 237 pushes the “fair use” loophole in copyright laws to the breaking point. It’s a thoroughly postmodern mash-up of scholarly film criticism and media content reappropriation, a “new” mind-blowing Kubrick movie for the YouTube generation that explores the nature of obsession and how coded language speaks to our subconscious until it finally invades the conscious world and reveals surprising truths.

The object of obsession in Room 237 is Kubrick himself, and his oft-misunderstood 1980 gothic family drama The Shining. The film centers on five people who have watched and rewatched The Shining in order to uncover secret meanings they say are obvious and plain to see for anyone who has also seen The Shining 200 times. When Room 237 goes into wide release in March, the person likely to draw most of the attention is Jay Weidner, an author, filmmaker, and self-described “hermetic scholar” who’s been saying for years that Stanley Kubrick was hired by the U.S. government to shoot fake footage of the moon landing, in exchange for the leverage he needed to make his aliens-are-God acidhead epic 2001: A Space Odyssey.2 For Weidner, The Shining is Kubrick’s mea culpa, with Jack Nicholson’s unhinged patriarch acting as a doppelgänger for the distraught director, and the sinister Overlook Hotel doubling for the all-powerful feds that infiltrated (and presumably ruined) his life.

The other interviewees in Room 237 aren’t outright conspiracy theorists like Weidner. They’re more along the lines of Geoffrey Cocks, a history professor from Michigan who reads The Shining as Kubrick’s comment on the Holocaust. Where Weidner sees moon landings, Cocks sees recurring instances of the number “42” and conspicuously German-made typewriters. As Cocks says toward the end of Room 237, it doesn’t matter that the various interpretations of what The Shining is “really” about — which in the documentary range from the extermination of the American Indians to the myth of the Minotaur — don’t seem to mesh, because “we all know from postmodern film criticism that author intent is only part of the story for any work of art. And those meanings are there regardless of whether the creator of the work was conscious of them.” Room 237 starts out talking about The Shining, but it’s really about how The Shining has morphed into different shapes and configurations through the years.

Room 237 is a really good documentary, but it’s maybe the greatest DVD extra of all time. It drove me in the last few weeks to compulsively rewatch Stanley Kubrick’s films, looking for my own connections, and shot me down a rabbit hole of Kubrick analysis online, of which Room 237 barely grazes the surface.3 What’s never really answered by Room 237 is why Stanley Kubrick’s movies inspire these intensely close readings more than movies made by other great directors. The cult of Kubrick seems predicated on the belief that Kubrick was a (1) genius that (2) was sequestered from the rest of the world for not-quite-knowable reasons. Whether Kubrick kept himself separate because he had clandestine relations with a cabal of government spooks and ultrarich hedonists, or because he was a little weird about strangers and traveling, this otherness is hardwired into his work, and it stubbornly suggests to some viewers that there will always be something else embedded in there that us “normal” people have never grasped.

Stanley Kubrick either gets way too much credit, or Room 237 finally gives him the exact right amount of credit he always deserved but didn’t want people to actually give him. I tend to believe the former, but I’m not prepared to rule out the latter. Either way, I imagine Stanley Kubrick would love all of this. With the possible exception of Alfred Hitchcock, no major director got off more on his self-made image as a controlling cipher imparted with a near-mystical ability to manipulate an audience. It’s an illusion that falters only when you remember that kid crying in the lobby outside of Fear and Desire.

Before Stanley Kubrick could fashion himself into a shadowy figure of international renown who may or may not have sneaked references to a labyrinthine underworld of cultural influence and moral corruption into his films,4 he needed to borrow money from his dad. Kubrick also hit up a rich uncle from California who owned a string of drugstores to pitch into a $10,000 pot before filming of Fear and Desire commenced in 1951. Armed with a script written by his high school chum Howard Sackler5 and assisted by a small film crew that included his then-wife Toba, Kubrick set out to paint his masterpiece in Southern California’s San Gabriel Mountains, with additional stops at locations near Bakersfield and Los Angeles.

Fear and Desire follows four soldiers, of unnamed affiliation, trapped behind enemy lines without a clear objective. “These soldiers that you see keep our language and our time but have no other country but the mind,” intones the opening voice-over narration, which tells you exactly how chin-stroke-y the rest of the movie is going to be. Not much else happens after that, outside of the platoon capturing a peasant girl (played by the ravishing Virginia Leith) and taking her prisoner. The film’s centerpiece features a lot of melodramatic huffing and puffing by future director-screenwriter Paul Mazursky, whose campy performance as Leith’s baby-faced captor, Private Sidney, prompted most of the snickering during early previews. Driven insane by Leith’s physical charms, Sidney — SPOILER ALERT! — assaults and kills her while overtly referencing Shakespeare’s The Tempest. (This only seems like a dumb idea if you’re not a first-time director under the age of 25.)

When Fear and Desire was released commercially in the spring of 1953, it garnered generally positive reviews from critics at The New Yorker, Time, Newsweek, and the New York Times, among other publications. Kubrick’s editing and cinematography were singled out for praise, while the clunkiness of Sackler’s script was somehow overlooked. But even Kubrick must’ve sensed that Fear and Desire probably wasn’t going to attract an audience on its own merits. Working in concert with the film’s distributor, Kubrick marketed Fear and Desire on the strength of Leith’s sex appeal, snapping a cheesecake dressing-room photo of his star clad in a tight satin breast-band that emphasized her erect nipples, and plastering it prominently on the film’s advertisements. Anyone who bought a ticket to Fear and Desire expecting to see that instead got a lot of scenes in which unshaven men stare forlornly at trees.

Within a few years of Fear and Desire‘s release, Stanley Kubrick would begin the process of becoming Stanley Kubrick. In 1958, when Kubrick was fresh off his first hit, Paths of Glory, he cut a familiar figure in the New York Times Magazine, which described him as a “lank-haired, slightly elusive, seemingly diffident young man who talks little, wears dark suits in the bright sunshine on Canon Drive, and makes astonishing movies.” He reportedly burned the negative of Fear and Desire shortly after it came and went at the box office, though he could never completely write the film out of his personal history.

It’s possible that the Stanley Kubrick who made Fear and Desire really did die after that tearful preview screening, and the wunderkind the world came to know was born. But if Kubrick’s life, like his films, is open to interpretation, I have a theory of my own: He remained essentially unchanged from the ambitious hustler who bit off more than he could chew on his first picture. It’s just that he learned to hide himself better. At the height of his career, the subterfuge grew so sophisticated that his audience would spend the following decades trying to parse it from the “real” man underneath. But in the end, it’s all subterfuge. Pain really is a good teacher.