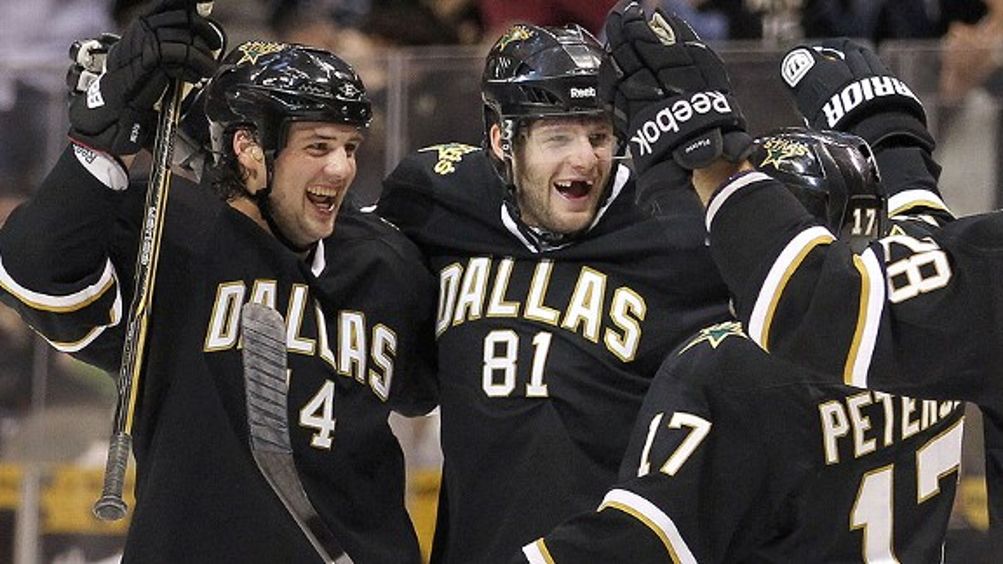 We just want to be coming in waves,” the Dallas Stars’ Eric Nystrom told Yahoo!’s Greg Wyshynski following his team’s 5-2 victory over the Washington Capitals on Tuesday night. “We keep saying, ‘Every guy’s the same, every guy’s the same.’ That’s a great mentality.”

It’s not just a great mentality, it’s one of the best descriptions I’ve read of the platonic ideal of team-first hockey. Visually, the metaphor works: the nonstop motion, the surging forward, the knocking down, the checking back, the fresh new players cresting over the boards. And functionally, too, it holds up. The best hockey teams are the ones with consistency and unyielding depth, with a “bottom six” that bring just as much effort and create just as many opportunities (however ugly) as the top two lines’ stars. Every guy’s the same.

Unlike most teams, the Dallas Stars don’t sport a logo on the front of their jerseys; they just have the word “Dallas.” It’s fitting, because on the ice, too, they don’t have the traditional big-name, super-marketed, marquee star players, though they do happen to have some of the best. When Brad Richards, this offseason’s biggest-name free agent, took off for the bright lights of New York, there was a sense that Dallas was done for. But a month into the season, that idea couldn’t be more incorrect.

At 11-3-0, the Stars currently hold the league’s top record, and they employ what is currently one of its most impressive lines. Jamie Benn and Loui Eriksson have combined for 13 goals and 21 assists, yet they’re under the radar of those who make Discover Card commercials or set up the pairings for the Winter Classic. But those two — along with new linemate Michael Ryder, who scored twice against Washington, and who came from a Bruins squad that last season learned the benefits of sharing the load — are leading a team that has made everyone on it seem brighter.

Take Sheldon Souray. Once an All-Star player with the league’s hardest shot, Souray signed a five-year deal with the Edmonton Oilers that began as a happy return home to his native province of Alberta and ended in mutually assured destruction.1 The defenseman ultimately became a free agent after Edmonton bought out his contract, and Dallas, looking to shore up its D, rolled the dice on him with a one-year deal this summer. It has paid off so far: Souray is third on the team in scoring, and is currently riding a four-game point streak.

Or take Kari Lehtonen, who spent the early part of his career as a talented but injury-prone (and overweight) goaltender in Atlanta. After renewed dedication to conditioning in the offseason, he’s first in wins and was named the NHL’s second star for the month of October. And then there’s a guy like Nystrom, who began the season being waived by the Wild but has been on a tear with the Stars: He has four goals in the past five games, including a streak of three straight. (His goal count so far this year matches his entire season’s output last year in Minnesota.)2 It’s fitting that he would be the one to so aptly verbalize the team’s current philosophy.

It’s not going to get any easier for the Stars, who no longer have the luxury of taking teams by surprise. And then there’s the problem of the team’s dismal attendance, which can no longer be explained away by the Texas Rangers being in the World Series, and which has gotten so bad that Eriksson admitted, “It’s also nice to go on the road, too, playing in some big arenas with a lot of people.”

But for now, it’s nice that the league’s top team is, well, such a team. Every guy’s the same.

Dallas’ win over Washington included this flying, Bobby Orr-reminiscent effort from Nystrom, whose mother and famous NHL father, Bobby, were there in the stands.

And the week was heavy with hat tricks. Tampa Bay’s Steven Stamkos scored three times from just off the left post, Colorado’s Matt Duchene continued to break out of his early-season funk, Tyler Seguin’s three goals in a Bruins 7-0 win over Toronto gave reporters one more reason to pester Phil Kessel about his 2009 trade, and while Detroit’s Johan Franzen’s third goal Tuesday night came on an empty net, it was basically the most skilled empty-net goal possible.3

The misery continues for the league’s bottomest-dwelling Columbus Blue Jackets, who have only five points on the season. (For reference, the second-worst team in the NHL, the New York Islanders, have twice as many points in the standings and have played two fewer games.)

There are glimmers of hope: Columbus acquired Pittsburgh center Mark Letestu for a fourth-rounder Tuesday night, and Jeff Carter, another center who came from the Philadelphia Flyers in a major offseason trade and was expected to be one of the team’s top contributors, is close to returning from a fractured foot suffered in an October practice. And one of the team’s biggest off-ice distractions is no longer: former Columbus head coach Ken Hitchcock was brought in by the St. Louis Blues to replace coach Davis Payne, ending the ongoing speculation that he’d be returning to his former position and the palpable awkwardness that existed as he continued to lurk around during Blue Jackets practices.4

Asked about his job security, Blue Jackets coach Scott Arniel said recently in an interview, “I’ll keep showing up until somebody tells me I’m not supposed to.” Inspiring words, to be sure! But you can’t really blame Arniel: As comical and futile as that sound bite may be, it’s a mentality you wish extended to more of his players.

Taking It Coast to Coast: A Skate Around the League

Well, that was interesting. It wasn’t one player stirring things up this past week, but rather an entire team. In their game against the Tampa Bay Lightning last night, which was televised nationally, the Philadelphia Flyers sat back and refused to move, protesting what they consider to be an unwelcome, oppressive, and ultimately unsustainable system. This “Occupy” stuff really seems to be catching on!

To back up: The words “neutral zone trap” have long been the NHL’s Kryptonite: In the post-lockout era, the league made a number of rule changes that were specifically designed to eliminate hang-back, clog-the-middle systems that were used to great success by teams like the Devils during their heyday. But, in the words of Sports Illustrated‘s Darren Eliot earlier this year, “neutral zone sludge is slowly beginning to build up across the league.”

In particular, the Tampa Bay Lightning under coach Guy Boucher made it to within one game of the Stanley Cup finals using a “1-3-1” forecheck that, at its best, was described by the Wall Street Journal as an offensive “turbocharger.” At its worst … well, thanks to the Flyers’ strategery, last night was probably its worst. Watch this video, taken 30 seconds into the start of the game, to see what I mean:10

It went on like that all night. (The refs, baffled, even called up the NHL’s “War Room” in Toronto to confirm that it was allowed.)

“You want it? Come and get it!” taunted the Flyers. Tampa, obedient to its coach and his system, did not. The Flyers refused to budge. So did Tampa. The result was a series of I’m Not Touchiiiinnnggggg Yoooouuuu standoffs that somehow managed to be both entertaining and absolutely unbearable, and which will no doubt lead to several days of discussion that will be more of the same. (Kicking things off in that vein: a fed-up Mike Milbury walking off the studio set.)

“That’s not hockey in my book,” Pronger said, and suddenly that choice of T-shirt earlier this week made all the more sense.

Previously from Katie Baker:
Wedded Blitz! The October Marriage Season
The Rise of the Female Distance Runner
Benching Ovechkin
The Horrible Habs
Coming to Grips With the Winter Classic
The Endless Battle Over Hockey Fights
Week 1 in the NHL