Welcome to the Super Bowl

Editor’s note: This article appears in the March 13 issue of ESPN The Magazine.

I was watching the 1996 U.S. poker championship last week on TV. Want to know why? Because the great Gabe Kaplan was the commentator, that’s why.

Many years ago, after Gabe dumped a hall of fame acting career to play poker professionally, his fans were universally appalled. This was the man who gave us “Welcome Back, Kotter” and “Fast Break” as well as some sizzling performances on “Battle of the Network Stars.” For God’s sake, he ripped Bob Conrad’s heart out in the most memorable 100-yard race since Jesse Owens silenced Berlin. Now he was hanging out with seedy cardplayers, looking more disheveled than the star of a hostage video. We were distraught.

Of course, the man has been revealed as a visionary. We doubted Gabe, we demeaned him. And we owe him an apology. He saw something in poker nobody else could see — namely, that the sport would take off. And if you watch that 1996 telecast, you can see why poker once struggled. Forget about the scummy characters; the coverage was abysmal. Now there are cameras under cards, nifty odds percentages, retroactive commentary with prewritten jokes. Back then, three cameramen recorded the action from afar as announcers mumbled pearls like, “Wow, he’s raising. I wonder if he has the aces.” Without knowing what everyone was holding, following the action was impossible, so we fought off boredom as cards were turned over and chips were moved around. It was like watching a bad Stallone movie in Spanish. Sure, you can follow the plot a little, and Stallone’s grunting really needs no translation … but you don’t know quite what’s happening. 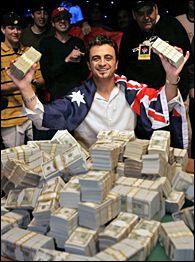 Now? You know what’s happening. I don’t call it “entertaining” necessarily to watch other people play poker, but it’s strangely useful, like learning how to cook lamb from a cooking show. Since deciding to play in the 2006 World Series, I find these shows invariably suck me in. What am I missing? Is there anything I do wrong? Can I pick up any tips? I want to be totally prepared for this summer.

I found this out during a recent Vegas trip. Just so you know, I started playing poker six years ago, back when “Rounders” was running 30 times a day on cable, brainwashing me into following in Mike McD’s footsteps. When my buddies and I trekked to Vegas twice a year, it was always to play blackjack or craps. Poker was considered deadlier than a hooker in Haiti, a Bad Ideas Jeans moment all the way around. We’d be eaten alive. That’s what we thought.

So when I sucked it up and played stud at the Mandalay Bay in 2000, my friends were appalled. And terrified. And impressed. I ended up winning $400, most of it on a straight flush that had the regulars ready to strangle me. One of my most satisfying gambling moments ever. If only I’d been dressed like Chuck Schick.
In those days, everyone at the table in Vegas knew how to play. They sat around taking smaller pots off one another, waiting for schmucks like me to come along, the preppies who emulated McD. Then they took turns bleeding us. Over the next three years, I received the same reaction every time I sat down. The lifers would look me over like horny prisoners salivating over fresh meat. But I always held my own. (Of course, I was only playing stud, which is like the D-League to hold’em’s NBA.) Then Chris Moneymaker happened and ESPN’s poker shows took off, and suddenly there were long lines in poker rooms and schools of fish itching to play. Poker wasn’t just for hard-core lifers anymore.

You’d think this development would make it harder to play in Vegas. Actually, it’s much easier. On my latest trip, I finally made The Leap from lower-limit to no-limit, losing my cherry at Binion’s. That’s like getting your first major-league at-bat in Fenway against Randy Johnson. Was I scared? Absolutely not. I treaded water for an hour with my buddy Sal, ultimately winning a $550 hand with a straight I caught on the draw. Or the pull. Whatever it’s called. (I’m not good at poker terminology; I think it’s slightly creepy.) My night made, I went into Dean Smith’s Four Corners and finished up $300. The following night at the Mirage, I dropped nearly two bills before pulling a $300 hand (pocket queens), which put me up another $75 before we moved over to blackjack. All in all, two nights of poker at the highest level netted me almost $400.

Could that have happened six years ago? Of course not. I would have gotten crushed. But now, everyone thinks he can play. And I mean, everyone. At the Mirage, two clean-cut kids from Georgia showed up with matching deer-in-the-headlights looks, like they borrowed Byung-Hyun Kim’s face from the 2001 World Series. As soon as they sat down, the old lady with sunglasses at the end of the table just about started to lick her lips. She’d probably been waiting all night for these saps. We took turns working them mercilessly. They lost enough money that Sal and I worried they’d have to pull a Kazuhito Tadano to pay for a hotel room.

Watch a few shows, play online for a few nights, read a book … and you’re ready for Vegas. Or so they all think. Well, it doesn’t work that way. You need to play for a few years, struggling at various casinos as you learn how to read people and work your way up from stud. You can’t skip any of these steps, just like you can’t jump from high school to the majors. Poker is about experience more than anything else. I have six years of experience, and it’s not nearly enough. At the World Series this summer, I’m going to get wiped out. I’m fine with this.

Then again, I don’t know why I’m complaining. The fish have made it easier to make some money. The only negative? All the poker stories. It’s bad enough reading them, even worse overhearing them. At McCarran Airport, some dude on his cellphone was recapping every major hand from the weekend, which is right up there with hearing someone bitch about his fantasy team. Wait, lemme guess, you had a great hand, it looked like you were going to win and then someone caught the winning card on the river? I can’t believe it! That never happens! Poker stories are as boring as the game’s current crop of stars, few of whom you’d ever idolize unless you were auditioning for a guest spot on “My Name Is Earl.” Both of these elements work against poker as a phenomenon. But poker as a game? Poker works. Poker is here to stay.

That’s why I’m excited about the World Series this summer. I’m even more excited to run into Gabe Kaplan, shake his hand, maybe even apologize for doubting the guy who saved Boom Boom Washington from Brooklyn gangs, beat Nevada State in its own gym and took down Bob Conrad. I should have known better.