Rios-Alvarado: Roshambo to the Death! 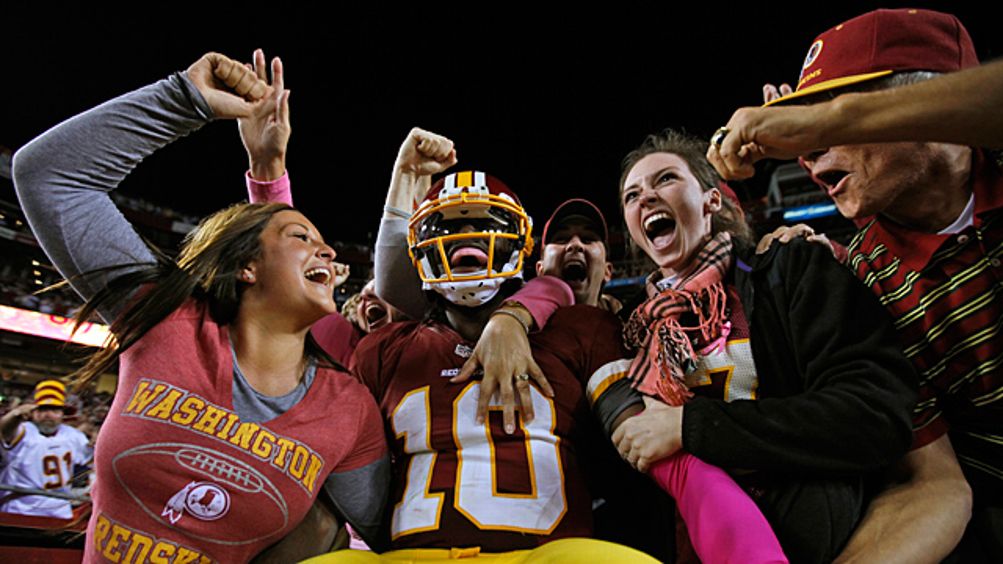 There were about three minutes left, and his Washington Redskins were clinging to a 31-26 lead, just trying to get a first down so they could run out the clock on the Minnesota Vikings, so wide receiver Josh Morgan ran his curl route, turned back toward the line of scrimmage, and, suddenly, he saw his quarterback coming hell-bent in his direction.

“At that point,” Morgan said later, “that play became a running play.”

All afternoon, for a number of different reasons, not all of them related strictly to sensible quarterback play, Robert Griffin III had been the very model of a modern game manager. He took only what the defense would give him. He slid to avoid unnecessary contact, and he went out of bounds when he had to. But here he was, behind Morgan’s block, tearing 76 yards up the left sideline and listening to his teammates tell him to go out of bounds until they saw that he was leaving the Minnesota secondary far behind. “That’s when ‘Go out of bounds’ became ‘Go, go, go,'” he said after the game. “I got to the sideline and I thought about going out of bounds because everybody’s been telling me that lately. You just — you know in certain situations, and I felt like I had the guy outflanked, so I just took off running.

“I could see guys saying, ‘Slide, slide,’ but I thought I could keep on running a little more. It was interesting to see the change in them while I was running down the sidelines.”

For a week, Griffin had been ensorcelled by the National Football League’s latest conjuring spell — head injuries. He suffered a minor concussion last Sunday and, therefore, had become An Issue and, therefore, An Argument, as the NFL tries to make 70 years of neglect and medical malpractice disappear with a wave of the magic PR wand. On Sunday, cleared to play, he made a glorious case for himself — passing for 182 yards and running for 138 more. He was careful with the ball, and he was careful with himself, too, and, in the game he played, you could see clearly what the NFL could look like if it raises a generation of players who are fully aware of the risks they’re taking and the dangers so inherent to the game that no new policy ever can be devised to eliminate them. First, in Sunday’s game itself, Griffin brought the Redskins back from a thin 9-0 deficit by judiciously mixing short passes and option runs, and even taking off himself from time to time, as everyone in FedEx Field held their breath, because that’s what you do now as a football fan.

The way that Griffin came to control the game — careful, but not cautious — was clear from the second quarter, when on one drive he and the Washington offense went 91 yards in 11 plays, eating up 6:36 on the clock in doing so, to go up 10-9 and take the lead for good. Griffin chopped up the middle of the Minnesota defense, mixing inside runs by Alfred Morris with his passes, until he found Santana Moss loose on a seam pattern down the middle for 30 yards to the Vikings’ 20-yard line. Five plays (and a relatively dubious roughing-the-passer call on Minnesota linebacker Erin Henderson, about which more anon) later, Morris went in standing up over the left side for the touchdown. On the drive, you could see Griffin taking care of the ball and taking care of himself at the same time, without ever losing the kind of edge he needed to play well.

“Like I told people, you stay aggressive but you just try to be smart,” he said. “I felt like I got out of bounds a couple times when I should have. I threw the ball away one time and got a penalty because the guy came and hit me. You try to play smart but stay aggressive. One time, I ran up the middle and I slid for seven yards. You got to live with that and not worry about the eight or nine yards you could have got taking the hit. I told the team I wasn’t going to leave them hanging, and I tried to make sure I did that today.”

This is a remarkably sophisticated answer for a rookie. In fact, it’s a remarkably sophisticated answer for anyone. For years, the prevailing ethic among NFL players was that a player’s primary obligation was to stay on the field no matter how seriously they were injured. This created a code of self-destructive omertà, the results of which you can see limping around the various Super Bowl buffets, blankly looking for the wives they left behind a minute and a half ago. What Griffin is arguing here is that he owed it to his teammates to be honest with himself and with his doctors about whether he was ready to play. That honesty about his condition was his primary obligation as a teammate.

“I felt good,” he continued. “I didn’t get hit too much, but it’s football, so your body’s going to break down during the course of a game, and that’s why you try to build it up during the week. The [medical] tests, they did a good job of making sure that I was OK, constantly being on me to be honest with them, so I wouldn’t go out there and put myself in harm’s way.

“I told them I would be honest with them. It was important for me to come out and play smart, so I’d always be there with them.”

Griffin is the first starting NFL quarterback born in the 1990s, and he is a real rookie sensation in this new era of the NFL, when player safety means something more than rousting your quarterback out of a Motor City brothel the night before a game. Robert Griffin III sees his health as something he owes not only to himself, but to his teammates. It is not an overstatement to call this a sea change. 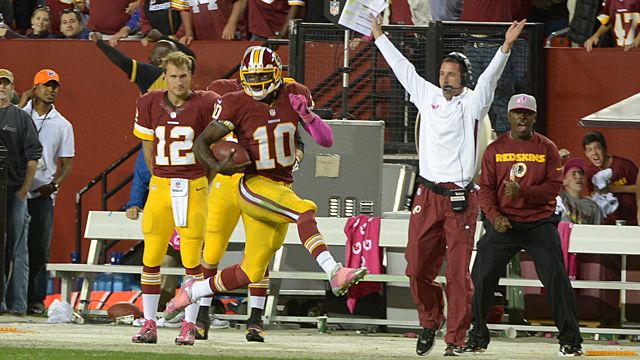 At the beginning of the week, it appeared that Griffin was going to be the latest guest star in the NFL’s latest season-long production: Pretend We Care About the Grunts. Last week, on his way to the ground, he got torpedoed in the noggin by Sean Weatherspoon of the Atlanta Falcons. Griffin got up looking very much like a man wandering in a universe of Tilt-a-Whirls. The Gillette Stadium press box, where I happened to be covering another game at the time, came instantly and Twitteringly alive, purporting that Griffin was unable to identify his exact location. That he had a concussion surprised nobody who saw the hit. What would happen afterward was a clear indication of the strange new world into which the NFL has entered now that muted public outrage and hydra-headed class-action lawsuits have forced the league to exercise whatever vestigial conscience it has.

From the moment he broke out last season at Baylor, Griffin has been a beloved public property. The child of military parents, born on Okinawa, Japan, he graduated early from both high school and college. His drive to last year’s Heisman Trophy began to pick up steam about halfway through the season, when he threw five touchdown passes, each to a different receiver, in a game against Rice. Then, last November, he led the Bears to a 45-38 win over Oklahoma, and his national presence proceeded to go on afterburners. It continued all the way through the draft and into this season, when Griffin became the NFC Offensive Player of the Week after lighting up the New Orleans Saints in his first regular-season professional game.

He was public property, for sure, but how much of him is public property is going to be a delicate and ongoing calibration for as long as he plays this game. There is no question that a lot of the concern for his health over the past week was genuine, but a lot of it also involved people covering their own guilty consciences, and some more of it had to do with the fact that he had made himself the kind of athlete with whom fans develop an immediate vicarious relationship. (Matt Cassel, for example, does not have this relationship with the fans in Kansas City, as the sad events of October 7 proved rather conclusively.) As late as the Fox pregame show, Howie Long, whom nobody would ever accuse of being mushy on the subject of whether someone should play, argued strenuously that Griffin should have been kept out of Sunday’s game. As the vestigial conscience of the NFL and its kept media and fans continues to evolve on these issues, we should all watch out for the moment during which relative concern for a player’s health doesn’t depend on whether the player is bankable, or even likable, or, worst of all in this context, successful. I don’t expect miracles straight off, however.

Griffin was chuckling over the roughing-the-passer call in the middle of that critical second-quarter drive, the one that gave Washington a first down at the Minnesota 7-yard line instead of just an incomplete pass that Griffin had thrown away because he was being careful with the ball and with his head. Henderson rolled him anyway, but there was more than a little suspicion that Griffin might have contributed a little propulsion of his own. “I mean, it wasn’t a basketball flop or anything,” he said. “I did sell it pretty well. It was just a great job of the ref and me being on the same page.”

In this season of shadows, Robert Griffin III has been both emerging star and cautionary tale. He is the embodiment of where the league is going, on and off the field. He is also a measure of where it’s been. He is a property that the league needs to protect, and he is an example of how the game’s fundamental essence may be changing, one player at a time. Being healthy is becoming the essence of being a teammate. Being honest with the doctors is becoming the essence of being a good teammate. “If I had been all right all week, and then shown up here today with symptoms,” Griffin said, “I wouldn’t have gone.”

Ultimately, because it is primarily up to the players to make this change, to rebel in this most basic way against the old ethic of suffering, it is this next generation of players who will decide whether the NFL will continue to prosper or to slip back into something atavistic and increasingly strange. Robert Griffin III is a great football player because he is careful, with the ball and with his head. He is the future, or there is none at all.