Counting down the fantasy 40

Editor’s note: This article appears in the Aug. 29 issue of ESPN The Magazine.

When Dwight Gooden splashed down as a 19-year-old rookie in 1984, I was attending prep school in Connecticut, where my basketball coach, a guy named Wally Ramsey, doubled as the biggest Mets fan alive. With Gooden, he knew right away. This was it. This was the guy. You watch baseball for 50 years hoping a Dwight Gooden comes along. 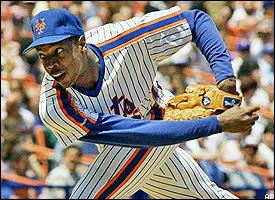 “I know you’re a Boston fan,” he told me. “But you need to see this kid pitch. This is a once-in-a-lifetime thing.”

So I started to watch. They showed almost every Mets game on WOR-TV back then, and because there was no DirecTV around to give me my Red Sox games, I gravitated toward Gooden and the Mets … first out of baseball boredom, but soon out of marvel. Wally was right: watching Gooden was like watching Mozart bang out a new piece every five days. Only Gooden’s work kept getting better. His music gave you chills, and all you could think about was hearing it again.

His fastball went up. That’s the best way I can describe it. Started out as a laser, accelerated near the plate and — defying the law of gravity — went up. Batters swung late, missed by 18 inches, hung their heads in shame. And it wasn’t even his best pitch. Gooden’s curveball was so remarkable, teammates dubbed it Lord Charles; it headed for the batter’s head, waited for the poor guy’s knees to buckle, then veered over the plate like a heat-seeking missile. What could you do? It was like a video game that lets you create your own pitcher, only you make him so completely untouchable that no one wants to play against you.

That September, Gooden blossomed during an impossible three-game stretch: a one-hitter against the Cubs, 16 K’s against the Pirates, 16 more against the Phillies. Back to back to back. I watched all three. The Pittsburgh game was my favorite because everyone at Shea stood at every two-strike count to cheer. I’d never seen that before. This was when Gooden’s ceiling was ripped away; every start carried the promise of a perfect game, or 20 K’s, or Lord Charles blowing out someone’s ACL. Doctor K finished the season on an 8-1 run and with 276 strikeouts. We all spent that winter talking about him, writing about him, comparing him with other prodigies and thinking about what was next. By the time he appeared on SI’s cover in April, some were wondering if he could possibly live up to the hype.

In New York, 1977 was the Summer of Sam. 1985? The Summer of Doc. After “struggling” to start 6-3, Gooden rolled off an impossible 18-1 streak that ended in a Cy Young Award. Even now, his numbers look like a practical joke: 1.53 ERA, 24 wins, 276 2/3 innings, 268 K’s, 16 complete games, 8 shutouts, 20 years old. Imagine that LeBron averaged 40/15/10 last season — that’s what the Summer of Doc felt like. You planned your calendar around him; every five nights you made sure you were by a TV. I remember going to see Wally that summer. We stood in his driveway talking about life, but the conversation inevitably steered back to Gooden, almost like he was a member of the family. “If this kid doesn’t pitch the first Mets no-hitter, it’s never happening,” Wally said, shaking his head.

As it turns out, he didn’t and it hasn’t. After an unspectacular third season marred by some puzzlingly sweaty starts, Gooden floundered in the World Series, “overslept” through the championship parade and failed a drug test the following spring. His career was never the same, although 745 innings before the age of 22 may have done just as much damage as the drugs. Then again, I can’t complain. Other than Pedro at his peak, I can’t remember anything like the Summer of Doc. Everyone was talking about the fireballing kid, a baseball player with no limits.

I was thinking about him last week, after 19-year-old Mariners sensation Felix Hernandez threw eight scoreless in his first home start. Like Gooden, he throws a fastball that explodes as if there were a CO2 canister attached to it and a curve that crumples. Like Gooden, he obviously feeds off the energy of his fans. But luckily, unlike the Mets, the Mariners will diligently protect him with ironclad pitch counts. Heck, they didn’t even let him throw a slider for a while. And without New York’s distractions, Felix seems to be in a better place to thrive.

Will I call my old friend Wally soon to warn him about the kid in Seattle? Will we savor a Summer of Felix together? Maybe. And that’s one of the great things about sports: once-in-a-lifetime experiences can’t happen twice … and yet, you never know.