SGW Quote of the Day archive

Editor’s note: This article appears in the April 10 issue of ESPN The Magazine. 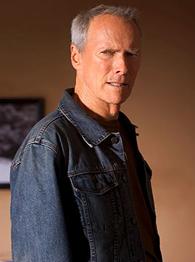 Near the end of the excruciatingly depressing “Million Dollar Baby,” this country’s greatest action hero stood over Hilary Swank’s hospital bed, shut off her respirator and started to cry. At least I think that’s what happened — sitting in the theater, I started jamming popcorn kernels into my eyeballs and bracing for the apocalypse. After all, if the toughest man in Hollywood could start to bawl on a 50-foot screen in front of millions of movie-goers, anything could happen. We were headed for some sort of masculine anarchy. Sure enough, 12 months later, two cowboys are finding forbidden love on “Brokeback Mountain.”

Now, that was a superb movie. Even gets a little dusty near the end. It’s a love story about two people who belonged together, only society wouldn’t allow it, so they suppressed their feelings and lived a charade … and I can’t believe I’m writing any of this in a sports column. Ten years ago, mainstream society wouldn’t have been ready for “Brokeback.” Now we are. We’ve evolved. Thanks to Clint, we can watch our heroes bawl. We can even cry too, if we want. It’s OK. It’s acceptable.

How has this changed our lives as sports fans? Well, back in the good old days, the only ones who could get away with whimpering were figure skaters, gymnasts, Dick Vermeil, Coach K and anyone competing in a women’s basketball game at any level. Now athletes and coaches tear up at the drop of a hat. During this year’s March Madness, we’ve seen more bawling than in the entire 1993 season of “Sally Jessy Raphael.” Here are three culprits:

1. J.J. Redick after Duke went down to LSU, although it was hard to tell if he was crying over the loss or because he could have robbed a liquor store and not killed his lottery hopes as definitively as that 3-for-18 did.

2. The blond big guy on Washington (the one who looked like a cross between Ivan Drago and Susan Powter) at the end of the Huskies’ tragic choke against UConn.

3. Morrison fighting off tears after Gonzaga blew a big lead to UCLA, even though the Zags still had a slim chance with 2.6 seconds remaining. As reader Carl Williams joked the next day, “I haven’t seen such a raw display of emotion since Rollergirl begged Amber Waves to be her mother during a coke binge in ‘Boogie Nights.'”

Morrison’s meltdown was a national story the following morning, with countless bloggers and radio hosts questioning his manhood, his sanity, his NBA prospects, you name it. As 350 to 400 e-mailers couldn’t wait to tell me, “So much for the Larry Bird comparisons. Larry Bird never would have done that.”

Actually, they’re all wrong. Larry wept like a schoolgirl at the end of his NCAA title showdown with Magic. Would The Legend have cried during a game in progress? Of course not. But Morrison has what can only be described as a competitive disorder. He hollers during games and seems like one of those guys who flips over Scrabble boards and keeps you playing Ping-Pong until he wins.

In this year’s Tournament alone, Morrison banged a basketball against his head to celebrate a clinching play, sank insurance free throws as he trash-talked opposing
players and unleashed so many fist pumps and guttural screams that Mark Madsen should sue for copyright infringement. (Not to mention carrying off a wispy
mustache and shaggy hairdo that inspired comparisons to everyone from Bird to “Dazed and Confused”‘s Randall “Pink” Floyd to Jaws from the Bond movies.) Say what you want about the guy, at least he’s committed. I’d take him on my beloved Celtics in a heartbeat, tears and all.

Twenty years ago, would a star player have been blackballed by organized sports for weeping before the end of a winnable game? Quite possibly. Growing up in Boston, I still remember every sob story that involved a guy on one of my teams: Tommy Heinsohn, after fouling out in a heroic performance during Game 7 of the 1957 NBA Finals; Bill Russell, after winning one last title against the heavily favored Lakers in 1969; Cooz, Yaz, Hondo and Orr, during their respective retirement ceremonies. But there aren’t many. Unless you had a good reason — a really good reason — you fought off tears and acted like a man. That was the drill.

And it held for fans, too. Only two sporting events broke me as a kid: the Sox-Yankees playoff game and the Bruins-Canadiens “too many men on the ice” game. Heck, I didn’t even cry after the Sox collapsed at Shea. The only Boston player anyone saw break down in the dugout was Wade Boggs, and that was more because he had lost his mom during the season. At least that’s what we told ourselves. Later on, during the 1996 Series, when he was riding a horse in Yankee Stadium with tears streaming down his face, we realized he may just have been a wuss.

But the mentality for years and years was stay strong and act like a man, epitomized by Tom Hanks’ “There’s no crying in baseball!” speech in “A League of Their Own.” When women’s college basketball gained exposure in the 1990s, the sport stood out for three things: coaches who walked awkwardly in high heels; an astonishing number of missed shots directly resulting in multiple players grabbing a rebound, followed by everyone excitedly glancing at the possession arrow; and, of course, the gratuitous sobbing. As soon as the outcome was decided in any game, everyone on both sides would wail like they were attending a funeral. (HBO aired an incredible documentary about Tennessee’s 1997 team that featured so much weeping, I thought the show was called “Pat Summitt Screams, Everyone Else Cries.”) Looking back, I wonder if the repeated exposure to crying wore down even the non-women’s hoops fans. Blame Vermeil too. And all the Olympians. And that sniveling lout Coach K. 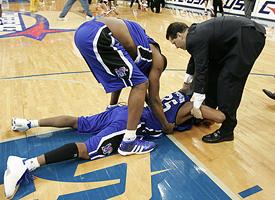 Now, crying has become a semiacceptable reality in sports. You can be heroic even with tears streaming down your face. Just ask Memphis’ Darius Washington Jr. He was the defining figure of last season after he missed those game-ending free throws against Louisville and collapsed in a blubbering heap. Nearly 50,000 positive columns, TV features and magazine pieces later, people still hail his gut-wrenching display of emotion.

Which brings us back to Morrison breaking down like Ron Burgundy after Baxter got punted off the bridge. I say a young Bird wouldn’t have cried with a chance to still save his season, but who knows? If The Legend were playing today, with the world turned into one giant chick flick, he might have shed a tear or two. It’s possible. He’d have regrouped and drilled the game-tying three at the buzzer, but still.

So if you think Morrison is feeling bad about the way he acted, you should send him a DVD of “Million Dollar Baby.”

As well as some Kleenex.