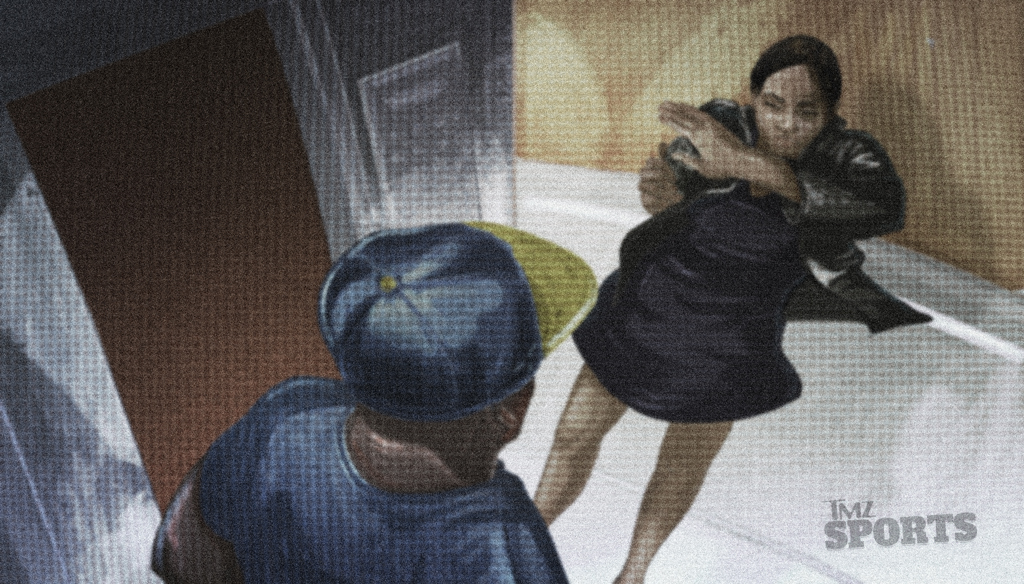 It is not, visually, one of the high points of 2014. The picture is hazy and a little blanched. There is no composition to speak of. The two human subjects are positioned arbitrarily off center in the frame, first at the top, near the elevator doors, then later at the bottom, just under the camera, where the larger subject is standing with his back to the viewer when he throws the punch that drops the smaller subject to the floor. The action has the tinny, slightly sped-up quality of an old silent movie. It looks almost like slapstick. It does, that is, unless you view it in slow motion, in which case it’s punctuated by nightmare strobelike jumps, as though every other frame had been cut out.

The video is, in other words, pretty much what you’d expect from routine security footage. It’s not trying to be art; there’s no human intelligence behind it. The casino hung a camera in its elevator, like every casino does in every one of its elevators, and among the million snippets of life that the camera happened to capture that week — the texting, the kissing, the embarrassed coughing, the staring straight ahead and waiting for the 12th floor to ring up — it happened to capture the moment when Ray Rice, the star running back for the NFL’s Baltimore Ravens, threw a left hook to the face of his fiancée, Janay Palmer,1 knocking her out cold, and then, with no particular display of concern, dragged her unconscious body into the hall.

The video was trustworthy precisely because it was so bad. It didn’t look posed. It didn’t feel staged. It hadn’t been lit to emphasize what anyone wanted you to notice. What sight are you most inclined to believe in? The answer is always the one you weren’t supposed to see. The obvious crappiness of the footage obtained by TMZ was a badge of credibility that preceded any analysis; you knew right away that you were witnessing something unprocessed, unfeigned, unfiltered, and therefore real. Inevitably, because this is 2014, the video that most people saw had, in fact, been edited for clarity, a point that Rice’s lawyers would use in his defense.2 But the first impression was still jarringly real. Which is already a little startling, in 2014, even before you get to the attack. Two decades of sex tapes and reality TV have taught us that the camera’s presence, our presence, changes the way people act. Anytime you see a famous person who’s unaware that the camera is rolling, who has no idea that he’s being watched, there’s this little jolt. Character is what you are in the dark; real is what you are on a surveillance tape with night vision.

But hang on; let’s turn that over for a second. What we’re saying is that hidden-camera video makes a special claim on our belief — which is a little strange to begin with, that what is essentially the record of an act of spying would seem like a natural repository for trust, but OK, life is complicated. But we’re saying that hidden-camera video makes a special claim on our belief because unlike other forms of photography, hidden-camera video doesn’t change anything. What happens on a hidden-camera tape is exactly what would have happened had there been no tape, because as far as any of the participants know, there isn’t one. The Rice video transformed the public response to the assault, but it was able to do so only because we knew that it hadn’t transformed the assault itself. Roger Goodell, who extended Rice’s suspension indefinitely after the tape’s release, famously said that the video “changed everything,” but it changed everything because it changed nothing. The tape was so powerful because it showed us that we shouldn’t have needed a tape in the first place.

Or to put that a slightly different way: How pathetic was our initial reaction to this story? It’s not that there was no outrage over the original two-game suspension, or over the fact that Rice, backed by the NFL, squirmed out of any legal consequences. There was; it simply wasn’t widespread enough to divert the most business-as-usual league in sports from the course of business as usual. It wasn’t loud enough to threaten sponsorships, or to make Goodell think seriously about the single most important issue in football (his own job security). It wasn’t deep enough to force a public consideration of the extent of football’s domestic-violence problem, even though the NFL’s conduct policy was imposed by Goodell’s predecessor explicitly to address that problem, and it certainly wasn’t enough to spread attention to domestic violence beyond the NFL. The outrage wasn’t even enough to create the tumbling tumbleweed of secondary scandal that we dealt with all this fall — what Goodell knew, when he knew it, when he saw the video, what he’d covered up. None of that happened until TMZ released the full tape in September.3

The video didn’t tell us anything new. We’d already known that Rice had hit Palmer. But somehow the fact that we could now see the punch, rather than only picture it, took the reaction from intense but still normal-spec cable-channel sports shouting to full-scale cultural meltdown. Ray’s a good guy who made a mistake, the Ravens and the NFL had gravely assured us; this line felt a lot less comfortable when you were staring at a looping GIF of Ray beating a woman senseless in an elevator. It felt more like what it was, a PR tactic cut-and-pasted by a cynical corporation to keep its product on the shelf. After that, Goodell held a finger to the prevailing winds and realized that he’d better pretend to do something like the pretend leader he is, before the scandal ran away on him; he came up with a procedurally murky indefinite suspension that has just been overturned in arbitration, as everyone knew it would be.

The point here is that the dramatic shift in both the public’s and the league’s reaction was prompted by a video that — again! — didn’t change anything. We already knew what had happened in the elevator; we had already seen the earlier video of Rice dragging Palmer’s body (!) through the doorway. What does it say about the human capacity for sympathy that those facts alone weren’t enough to create more than a midtier public outcry? The absence of a full tape might have enabled men’s-rights paladins to spend the summer flexing in comment-section mirrors about how maybe there was more to the story than we realized,4 but were those guys ever influential outside their home subreddits? It wasn’t Rice’s defenders who had to turn on the NFL before the scandal could blow up. It was the people who cared to begin with, but not all that much; who knew Rice had done something terrible, but were willing to look away from that knowledge as long as the outrage could be made to sound like white noise. It is perilously easy to ignore problems that aren’t right in your field of view. Maybe the most chilling aspect of the tape was that it exposed the depth of that original indifference.

The tape made indifference impossible. That is: It made indifference impossible in this case. The problem with Goodell’s insistence that “the video changed everything” is that domestic violence is widespread, and most of the time, there’s no camera. The Rice scandal has been credited with starting a national conversation about violence against women. But it’s been a limited conversation, even within football. Think about Joe Mixon, the Oklahoma running back who, in an altercation in a restaurant last summer, punched a fellow student, Amelia Molitor, so hard that he allegedly broke bones in her face. A video of this incident exists. It was shown to the media by police.5 It has been described, by people who have seen it. But the city of Norman, Oklahoma, refuses to release it to the public. And because we haven’t seen the tape, we haven’t seemed to care that much about the incident. There will be some indignation if Mixon plays for the Sooners next year. How much more would there be if the world had watched the 6-foot-2, 210-pound Mixon knock a female college student unconscious?

For the Rice tape to help you understand the extent of the domestic-violence problem in the United States, you have to imagine that TMZ kept posting videos — that it posted one two seconds later, in fact, and another one three seconds after that. It started throwing up 24 videos a minute, faster than you could play them, too fast for you to keep up. In three of these videos during the first day, you could watch a woman being murdered by her partner. Then three more on the second day. And so on. You kept playing them; TMZ kept churning out GIFs. You watched a million videos a month. Twelve million in the first year. And the videos kept coming.

Really, of course, you watched one video: Rice’s. But these other cases exist. All of them, in overwhelming numbers. And yet when people get angry about Ray Rice, the other cases tend to slip through the cracks, replaced by outrages specific to football. Roger Goodell should lose his job. But if you’re angry enough to want Goodell fired, shouldn’t you be angry enough to think about the other victims of violence? To talk about them? The absence of footage, just as in Mixon’s assault of Amelia Molitor, doesn’t make them any less real. What we saw on the Rice tape was horrifying. But the moral failure wasn’t only Rice’s. It wasn’t only Goodell’s. It’s ours, too, if we can’t bring ourselves to sympathize except when we can see.