In Defense of Vince Carter 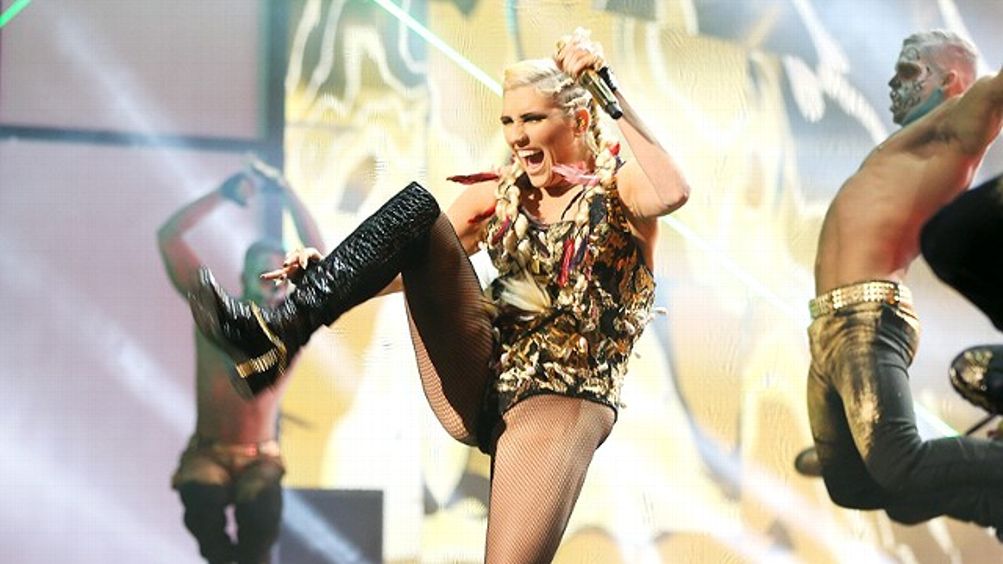 The Ke$ha paradigm has shifted, and I don’t know how to feel. It happened over Thanksgiving weekend in the New York Times, which tasked music journalist Simon Reynolds — quite possibly the most qualified man on the planet when it comes to making erudite statements about pop music that instantly seem profound — to profile the sorta-singer, sorta-rapper in advance of her latest record, Warrior. As the album title suggests, Ke$ha has come prepared to joust with any and all enemies posing a threat to the sovereign nation of Ke$ha$tan. On the song “Crazy Kids,” Warrior‘s most pointed diatribe against her multitude of “haters,” Ke$ha boldly pisses out a battle perimeter with the oratorical flair of a Garbage Pail Kid reciting Mel Gibson’s “They’ll never take our freedom!” speech from Braveheart: “Ke$ha don’t give two fucks / I came to start the ruckus / And ya wanna party with us / ‘Cause we crazy motherfuckers.”

What’s incredible about Ke$ha these days is that she requires neither sword nor shield to protect her trash-strewn turf, because so many smart people (including writers for the New York Times) are now suddenly onboard, no matter the wild parties or violent ruckuses that may follow.1 Reynolds’s piece calls Ke$ha’s self-described “garbage chic” — which is tempered on Warrior — “refreshing in a pop era of anodyne glamour.” It eloquently argues that the bubble-nihilism of hits like “Tik Tok” and “Your Love Is My Drug” — both from 2010’s Animal, and two of the most inescapable pop songs of recent years — “caught the mood of embattled hedonism in post-crash America,” making Ke$ha “among the first pop artists to tap into inchoate feelings bubbling up from within popular culture: a sense of ‘no future’ related to the financial crash and economic precariousness.” Ke$ha is not only a crazy motherfucker, but according to the paper of record, she’s also a crazy motherfucking spokesperson for a generation.

As an early adopter of Animal and Ke$ha’s Godspell-gone-to-seed aesthetic, I find this gratifying and a little bewildering. Let’s set the record straight: Until very recently, saying you were a Ke$ha fan in the company of serious pop music thinker types was often considered a provocation.2 I have a friend who once insisted that liking Ke$ha meant that I secretly hated pop music, because why else would I embrace a singer who seemed to embody everything that was vacuous, obnoxious, and unseemly about the Hot 100? Well, because of what Reynolds wrote in the Times: Ke$ha’s “year zero” pop has been incongruously influential and enduring, as Warrior‘s pre-release handclaps-and-end-times salvo “Die Young” — her best song and one of 2012’s top singles3 — demonstrates.

But there’s something else Reynolds didn’t mention that is probably the no. 1 thing I love most about Ke$ha: She is a brilliant irritant. With Animal and 2010’s supplemental Cannibal EP, she annoyed a group of people that is always hilarious to piss off: snooty arbiters of “authentic” music.4 Ke$ha is not authentic about anything except her hunger for gratification and desire to become whatever she dreams up. Ke$ha is Kiss in 1974. Ke$ha is the Beastie Boys in 1986. She is all tongue and exploded six-packs of Bud. She absorbs the hoariest signifiers of “disreputable” pop — sledgehammer dance beats, ringtone melodies, inhuman AutoTune sheen, rapping that sounds like singing and singing that sounds like drunken club chatter — deconstructs them, and creates something dumber, smarter, more moronic, and more ingenious than what came before. She represents what pop music can deliver in its purest, most puerile form, which is pleasure outside the normal confines of taste, decorum, or “goodness.”

Ke$ha has not yet let success interfere with the business of flinging boogers at squares. (“Now that I’m famous, you’re up my anus,” she memorably declared on Cannibal.) But now that the Ke$ha paradigm has shifted, and she’s on the verge of actually becoming critically acclaimed, an unforeseen problem accompanies the release of Warrior: Can a respectable Ke$ha still be Ke$ha?

I won’t leave you in suspense: Warrior sounds mostly like what you’d expect a Ke$ha record to sound like, which is to say it deviates significantly from what Ke$ha had originally intimated it would be. The initial plan was to ditch the Europop thump of her first two records and make a ’70s-style rock album influenced by Paul Ryan iPod staples like AC/DC and Led Zeppelin. But producer and mentor Dr. Luke eventually coaxed her back to a more Ke$ha-like sound, pointing out the lack of current pop hits informed by schlong-y classic rockers. What remains unchanged from the early conception of Warrior is her choice of collaborators: Where Animal featured the imbecilic bro-synth duo 3OH!3 on the self-explanatory “Blah Blah Blah,” Warrior leans heavily in a denim-clad direction, tapping Wayne Coyne of the Flaming Lips, Patrick Carney of the Black Keys, and punk rock avatar Iggy Pop.

The guest stars aren’t just window dressing. While Dr. Luke (the album’s executive producer and orchestrator of a production team that includes Will.I.Am., Max Martin, and Benny Blanco) doesn’t steer Warrior too far from contemporary pop’s center lane, the debauched rock-star posturing (and the inevitable messianic streak it’s paired with) is still discernible. “I don’t want to go full-on rock, I just want to marry the kind of music I listen to and the kind of music I make,'” Ke$ha explained in her Times profile. Actually, Warrior is more anthemic than modern rock records dare to be, as Ke$ha commands the sort of vast, working-class audience that the majority of bands aren’t able (or willing) to reach.5 Just as Lady Gaga has a Kiss Army–like following of “monsters,” Ke$ha’s “animals” are addressed (and therefore united) throughout Warrior, with the title track acting as a kind of Ke$ha “dirty is as dirty does” national anthem: “We are the misfits / We are the bad kids / The degenerates / We ain’t perfect but that’s all right!” These kinds of sentiments were standard in rock when hair metal ruled the roost — peaking around the time Ke$ha was born in 1987 — but have faded as upper-class indie bands have become more prominent.

When Iggy Pop finally shows up on Warrior‘s screechiest, most ridiculous track, the deliberately gross sex song “Dirty Love” — Ke$ha yelps “It’s Iggy Pop!” in the first few bars, so you can’t miss him — purists will surely weep at what the head Stooge has been reduced to.6 But Iggy has never let dignity (or lyrical sophistication) get in the way of a good time,7 and he is more than happy to be a prop, Trojan horse, and kindred spirit for Ke$ha, wolfishly crooning lines about how cockroaches, “rug merchants,” and Rick Santorum all get nasty “but a wild child can do it better.”

Where Warrior departs from Animal and Cannibal is Ke$ha’s decision to introduce a conscience into her persona. The Goodbye Yellow Brick Road–isms of the regretful ballad “Wonderland” are among the only remnants of the straightforward rock album that Warrior could have become. Unlike practically every other Ke$ha song, “Wonderland” acknowledges the existence of a morning after with real, lasting consequences. (“Feels like it was a movie / that plays in my mind /shadows of a past life / wish I could rewind.”) The album-closing “Love Into the Light”8 is even more of a drag: Over a creeping drum-machine bounce that replicates the desolate mechanical pulse of Phil Collins’s “In the Air Tonight,” Ke$ha sighs deeply over the burden of being loathed on the Internet: “All of the shit talk, yeah / All the chatter / Cuts like a knife, yeah / Kills like a dagger … Can’t we all get over ourselves / And just stop talking shit?”

But some of us love it when you talk shit, Ke$ha. It is your franchise. For the time being, at least, she’s still willing to play the part, but her resolve seems to be weakening. On “Tik Tok,” Ke$ha famously brushed her teeth with a bottle of Jack. On Warrior‘s “C’mon,” she downgrades to a “warm wine cooler.” In the world of Ke$ha, this amounts to a spiritual crisis. She’s aware of the hangover now. She can see beyond the night. Ke$ha is growing up, and I don’t know how to feel.