Where have you gone,Magic, Isiah and Cousy?

The following is an excerpt from Bill Simmons 2005 NBA Finals preview.

• Interesting quote from Suns coach Mike D’Antoni this week: “[Tim Duncan] is the ultimate winner, and that’s why they’re so good … I hate saying it, but he’s the best player in the game.”

Translation: Duncan is so good, I just threw my 2005 MVP under the bus.

And since Duncan is in his absolute prime right now (eighth season, 29 years old), the whole “is he the greatest power forward of all-time?” debate has been one of the running subplots of the playoffs. On “Pardon the Interruption” this week, both Kornheiser and Wilbon agreed he was headed that way but hadn’t earned the title yet. Which I find patently absurd, of course. Why couldn’t you make the claim? What other power forward was the best guy on a team that won three titles in his first eight seasons? Who was a more complete player? And most important, what would you change about him?

Comparing him to the other candidates at power forward …

Karl Malone – Fifty years from now, people will examine his stats and say, “Wait a second, this guy was one of the five best basketball players ever!” And that’s why you shouldn’t totally trust statistics. There was no stat that could fully capture the Karl Malone “Uh-oh, I’m taking another dump in a big playoff game” Face. 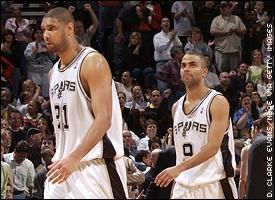 Charles Barkley – His ceiling might have been higher than anyone else’s, but Barkley’s career actually makes me a little angry. You watch those old Suns games from the ’93 season and it’s like, “Why the heck did it take him nine years to get in phenomenal shape?” And unlike Malone, his playoff stats were always better than his regular-season stats – for instance, in the ’86 playoffs (his second season), he averaged a 26-15 in 12 games. Remarkable. I think we will see 20 more Karl Malones before we see another 6-foot-4 power forward who could dominate games like that. Still, he just wasn’t as consistent as Duncan, although he is infinitely more fun to hang out with.

Kevin McHale – We’ll never know how good he could have been because he broke his foot during the ’87 season (when he made first-team All-NBA and shot 60 percent from the field), then aggravated the injury beyond repair during the playoffs. He was never the same after that. But he was the best low-post player in the history of the position, as well as the best defender (everyone forgets this now, but he has to be the only guy who ever guarded Kareem and Andrew Toney within a two-month span).

Elvin Hayes – A little before my time, but everyone seems to agree that he made Karl Malone look clutch by comparison.

Bob Pettit – Sorry, I can’t vote for anyone who played during an era when players actually smoked butts at halftime.

My vote still goes to Duncan. Although Amare Stoudemire might end up blowing everyone else away before everything’s said and done. Or, as Detroit reader Mike Rooney points out: “If there’s an NBA lockout, there’s a chance that Amare Stoudemire could put on 150 pounds like Shawn Kemp did. Shouldn’t that be enough to get the sides to agree?”