The mail, the picks and the cheaters

Breaking down The Obvious Game

Editor’s note: This column appears in the September 24 issue of ESPN The Magazine.

If last year’s memorable TV phrase was “Save the cheerleader, save the world,” I’m declaring this year’s to be “Save the show.” NBC is damned close to burying Friday Night Lights, which would be a shame on a number of levels, but none more serious than this one: It’s the greatest sports-related show ever made. Returning for a second season on Oct. 5, it’s a fair bet that FNL will be canceled by Christmas. And when it is, it’s going to be because of people like you. 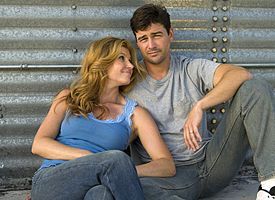 Now, I know only about a thousand people, not counting the anonymous folks in my Barely Legal chat rooms. Since almost two million people subscribe to this magazine, there’s an overwhelming chance we don’t know each other. That said, I feel confident about making the following three generalizations:

No. 1: You’re reading this magazine because you like sports.

No. 2: If you like to watch TV, you wouldn’t knowingly turn your back on a great show.

I know, I know, that sounds like a quote from Joe Theismann. But most rational TV fans will cave once a show generates enough buzz, either because their curiosity is piqued or because it’s on cable with an “N” or an “SSC” in the ratings. Hey, I’ve been there myself: I held out on The Sopranos and The Wire. I don’t like being told what to watch; this dates back to when a fellow fourth-grader made me feel dumb because I wasn’t watching Doctor Who reruns, and we ended up fighting to a draw at recess. But when the buzz passed a certain tipping point, I gave in and gave both HBO icons a fair chance. Before long, I realized they’re the two most important TV shows of all time, narrowly edging out Beavis and Butt-Head. Point is, you can never know for sure until you watch.

(I know that in certain cases you ignore the buzz simply because you don’t give a crap about the subject matter. I feel this way about tennis, a sport I once loved, before it became too fast and impersonal for its own good. You could pull a Biff Tannen and guarantee that Roger Federer and Andy Roddick were about to play the greatest match ever, and I wouldn’t tune in. But who doesn’t want to get hooked on a good TV show? Well, except those who are homeschooled.)

No. 3: If Nos. 1 and 2 are true, there’s an overwhelming chance you’d love FNL — and a decent chance you aren’t watching it. And if that’s the case, don’t you owe it to yourself to rent Season 1, Disc 1, and try the first four episodes? Look, if FNL doesn’t make it, we’re just going to get more Grey’s Anatomy spin-offs, a CSI for every city and 20 Deal or No Deal clones. Hollywood doesn’t like to take chances, and it doesn’t like to fail; it figures out what works, bleeds it to death, then flips the corpse and bleeds it some more. Execs don’t care that a few million faithful treasure a show, singing its praises like religious fanatics. They care only that 15 to 20 million kinda-sorta-maybe like it. And it doesn’t matter who those viewers are or how dumb they might be, either, as long as they keep coming back for more.

Despite what I might have said in the past about jumping on team bandwagons, you shouldn’t feel guilty about jumping on this one. I watched the pilot when it originally aired, but I didn’t love it: too much puke-cam (the camera stopped moving so much in later episodes) and an unspeakable sports inconsistency (Dillon High completes a game-winning Hail Mary that could have happened only on a 140-yard field). Once the abysmal ratings were announced, I assumed the show was doomed and opted not to waste my time with Episode 2. Networks pull the plug so quickly these days, you can be burned by getting hooked on something no one else is watching. Ask my wife, who’s still complaining about never having learned the identity of the murderer on FOX’s Reunion.

If you’re either too cheap or too lazy to get your hands on the DVD, you can go to the NBC website and watch every episode from Season 1 for free.

And once you do that, you’ll want to own them forever. So head on over to Amazon.com and get all 22 episodes for $20.

After FNL garnered its critical groundswell, I decided to wait for the late-summer DVD release to dive back in. My buddy Connor, a man who knows how to get things, refused to accept this, mailing me the Japanese import in June. That’s right, I have a friend who loves FNL so much, he actually couldn’t deal with my being willing to wait two more months to see it. So he called in some connections and possibly violated U.S.-Japan trade agreements so I could catch up. As he predicted, the Sports Gal and I ripped through all 22 episodes in a week, learning the Japanese words for “play,” “stop” and “pause” in the process. Quite simply, FNL is the best date show ever, an improbable cross between The O.C. and every sports show you ever wanted Hollywood to make. It’s the first show my wife and I have loved equally, but for different reasons. What
can be better than that?

On Aug. 28, NBC released the American DVDs with a “satisfaction guaranteed” gimmick. Now if you continue to ignore FNL, it’s only because you’re trying to hurt me. If you do give it a shot, let me recommend the impeccable acting, the lively football scenes (although they tend to go overboard on exciting finishes), the risky story lines and especially Coach Taylor’s family, the most authentic household in recent TV history. Every nuance is nailed, every hug seems genuine, every fight makes sense, every sarcastic barb and flustered reaction ring true. If there are better TV actors than Kyle Chandler (Coach) and Connie Britton (Mrs. Coach), I haven’t TiVoed them. Pay particular attention to the astonishing two-parter in which an older assistant sets off a racial powder keg before a big playoff game. If FNL were Michael Jordan, Lyla Garrity’s slam-page episode would be the 63-point game in Boston (the coming-out party), and the two-parter would be the 1991 Finals (the moment considerable potential is realized).

Look, I’m the biggest White Shadow fan on the planet … and even I concede that FNL is the greatest sports show ever. Shadow died prematurely because the story line called for it to graduate too many key characters at once. I can live with that. FNL is going to die prematurely because five times as many Americans would rather watch an acerbic British guy belittle dreadful singers on a reality show. I can’t live with that.

So please, please help me and every other FNL fanatic. Watch the show. Spread the gospel. You won’t save the world as they did in Heroes, and you probably won’t prevail in the end, but as Coach Taylor once told his team, “Every man at some point in his life is going to lose a battle. He’s going to fight, and he’s going to lose. But what makes him a man is that in the midst of that battle, he does not lose himself.”

I pray we’re not sticking that quote on his TV tombstone in two months.