Championship Wrap-up: They Are Who We Thought They Were 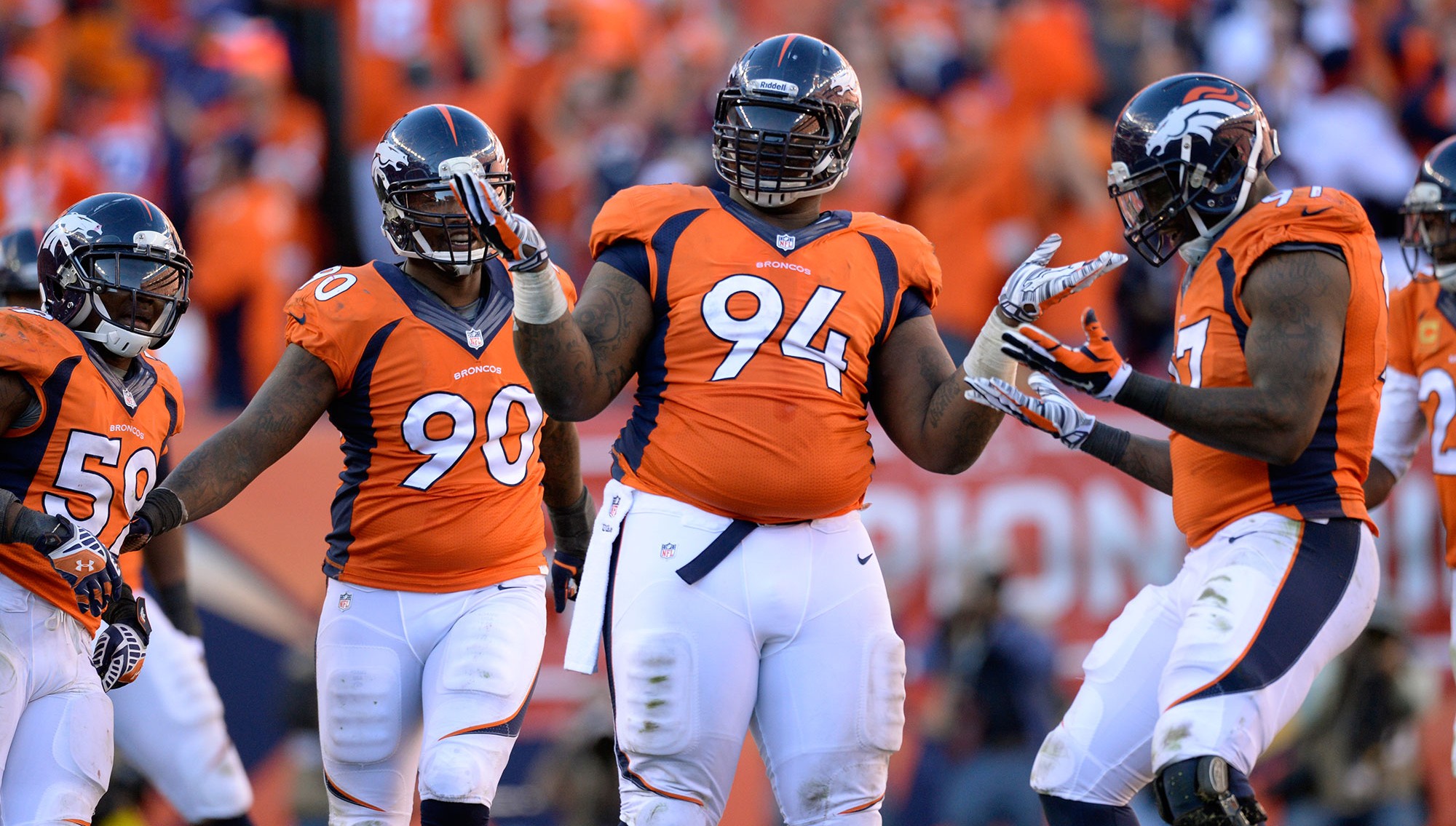 The lockers to either side of him had long been empty when Terrance Knighton finally sat down in front of his. Most of the Broncos had already showered and left, but more than an hour after the confetti fell on Sports Authority Field, Knighton was just tearing the tape from his cleats. The stream of reporters and questions had been steady, and as usual, the man considered the most loquacious in the Denver locker room was happy to talk. His white AFC championship T-shirt, most of the stickers still on, struggled to contain him. Defensive linemen aren’t known for being small, but what’s inescapable about Knighton is his width. Earlier this week, linebacker Wesley Woodyard was asked when he knew Knighton would be good for the Broncos’ defense. “When I stood behind him and I saw his hips,” he said.

Knighton had just finished the type of game that turns a mostly anonymous defensive tackle into a featured star in the NFL’s starriest week. With four tackles (two for loss), a drive-ending sack of Tom Brady, and a knack for chewing up both space and offensive linemen in the Broncos’ 26-16 win, Knighton was the leader of a defense that suffocated the Patriots. The third-highest scoring team in the NFL managed three points in the first three quarters, and a running game that looked dominant in New England’s past two games finished with 64 yards. The clock-eating drives that were supposed to keep Peyton Manning at bay never even started.

Knighton isn’t yet a household name, but come Super Bowl media week, having a nickname like “Pot Roast” won’t hurt. “I didn’t [like it] at first,” Knighton said. “When I first signed here, I tried to get rid of it. But I’m going to embrace it. The fans like it. I like it.”

He got the name in Jacksonville, where a teammate decided his dinner order on the team plane had a ring to it. Knighton spent his first three seasons with the Jaguars, and when he signed with the Broncos this offseason, “Pot Roast” wasn’t all he wanted to shake. His deal was modest (two years, $4.5 million) — fit for a player brought in to compete for a starting role but not promised one. A year later, Knighton is the best player on a defense going to the Super Bowl. “I felt like my talents were overshadowed in the past,” Knighton said. “I wanted to rise to the occasion. I wanted to make a play, to make people know my name.” They do now. “Pot Roast” is forever.

Playing in Denver isn’t like playing in Jacksonville. Knighton left a place mired in misery for a team bent on a championship. “We hold each other accountable — make sure guys are watching film, doing the extra work, taking care of their bodies,” Knighton said. Around the third preseason game, coaches came to Knighton and asked him to lose 25 pounds. By Week 1, he had, and it has made all the difference. Knighton said that accountability has permeated the whole Broncos roster, but it begins at the top.

“It starts with Elway,” Knighton said.

The same can be said about nearly every great moment in Broncos history. John Elway’s own playoff heroism aside, allusions to this image and Denver’s first great quarterback securing its second are bound to dominate the next two weeks. This team is what it is because of Peyton Manning. But yesterday’s win featured cameos from nearly every small choice Elway, the executive vice-president of football operations, and Denver’s front office made last spring.

It started on the first series, when Dominique Rodgers-Cromartie made a perfect open-field tackle and broke up a pass on third down. After two middling seasons with the Eagles, the former first-round pick signed a one-year, $5 million contract on March 13 — the same day the Broncos signed Knighton. Twenty-nine cornerbacks made more money than Rodgers-Cromartie this season. Few played better. In a Broncos secondary otherwise ravaged by injuries and inconsistencies, he was there.

The day before signing Rodgers-Cromartie, Denver won over former Chargers guard Louis Vasquez with a four-year deal. Vasquez isn’t going to the Pro Bowl, but that’s only because the Broncos will be a little busy over the next couple of weeks. As a unit, the Broncos’ offensive line had a nearly perfect day. Other than Chandler Jones grazing Manning on the final throw of Denver’s first scoring drive, there wasn’t a Patriot near him all game. The Broncos didn’t allow a sack or a knockdown, and when they wanted to run the ball, they did. On a third-and-10 from the Broncos’ 42-yard line, Manning saw a front he liked and checked to a run for Knowshon Moreno. Denver got its 10 yards — plus 19 more — and scored its first touchdown four plays later.

One of Vasquez’s teammates in San Diego followed him to Denver, but unlike Vasquez, Shaun Phillips was almost an afterthought. The Chargers (a team not flush with pass-rushing talent) allowed the 32-year-old outside linebacker to walk, and the Broncos signed him for just $1 million, none of it guaranteed. Phillips told the Denver Post he had better offers elsewhere, but he wanted to play for the Broncos.

“That’s why I came here, to be in this situation, to be with a team that is right there in the mix,” Phillips said this summer. “I want a chance at the whole thing.”

Considered at best a complementary rusher to Von Miller, Phillips led the Broncos with 10 sacks and was even better against the run. He isn’t the explosive pass-rusher he was early on in San Diego. But Phillips plays with the discipline that allows others to make plays — holding down the edge and funneling runs back inside — while still occasionally adding impactful ones himself. When New England scored a touchdown to cut the lead to 10 in the fourth quarter, their bid at a two-point conversion was a Shane Vereen run up the middle. Crashing down and making the tackle a yard shy of the goal line was Phillips.

It was another stop in a string of them for the Denver run defense. LeGarrette Blount, he of the 166 yards and four touchdowns a week ago, had six yards on five carries. “I took the onus on myself this week,” Knighton said about stopping New England’s running game. “Me and [Sylvester Williams], we just said, ‘We’re not going to let them get this thing rolling.’” 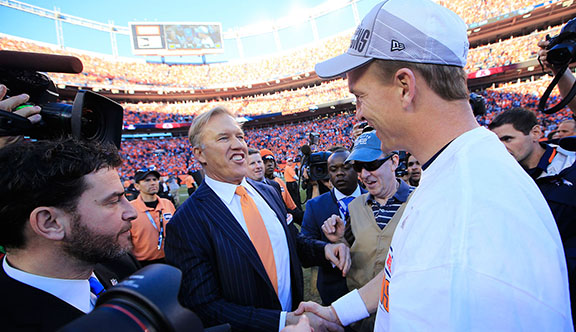 As Knighton finally pulled his cleats from his feet, a Manning family reunion was happening in the far corner of Denver’s locker room. While Peyton got dressed, Eli and Cooper talked with a nearly voiceless, clearly jubilant John Fox. A group of reporters gathered around Archie. He spoke of his pride for his son, but also of moments in the past two years when it seemed like none of this might be possible again. Archie recounted a phone call he’d gotten from Peyton after his initial visit to Denver. The trip had been exhausting, and Peyton told his father that rather than plan any more meetings, he was ready to get home. “I said, ‘Where’s home?’” Archie said, to laughs.

The completeness of Denver’s victory yesterday was possible thanks to the quieter decisions Elway made as he filled out his roster. But quiet decisions would matter little without Manning. When the video screen at Mile High flashed Manning’s numbers as the Broncos started their first possession yesterday, they barely seemed real: 5,477 yards and 55 touchdowns while completing 68.3 percent of his passes. The best quarterback season in NFL history came from a player who was cut two years ago.

That’s a simplified way of describing the complex circumstances facing the Colts, but no matter how or why they chose to move on in 2012, there were moments yesterday when it was difficult to believe that all this had happened. The palace Elway built was filled mostly with no. 18 jerseys. A franchise defined by one of the greatest quarterbacks ever has been transformed by another one. Manning’s performance was the type of game in which the score says too little. His 400 yards were the most he’d ever thrown for against Belichick, and the Broncos’ 507 total yards were the most against any Belichick-era Patriots team. But somehow, his 11 incompletions feels like too many. At no point did Manning ever look rushed, confused, or uncomfortable. It wasn’t just that the Patriots weren’t hitting him. They weren’t even registering.

Standing at the podium, Manning was asked whether he had considered the implications of the game — and of who he was playing — earlier in the week. “I think playing quarterback, there are a number of things that come along with it,” Manning said. One of those things, deserved or not, is a career defined by playoff success. “It’s hard to get to the Super Bowl,” Manning said. “I’m telling ya, it’s hard to win it, but it’s hard to get there.”

In that moment, Manning was referring to his happiness for Champ Bailey, another future Canton dweller, who will play in his first Super Bowl next month. But it doubled as a reminder. Chances for championships are rare; each matters, and for Manning, this one matters even more. At 38, this could be his last, and although one might be enough for most quarterbacks, for Manning, it’s a body of work that still feels incomplete.

Another win for Manning would equal Elway’s total. The sight of them standing side by side, each owners of two championships, would be the lasting, iconic image — Peyton Manning becoming, and maybe surpassing, the man who brought him here. Yet for Elway, adding a Super Bowl as the architect rather than the hero would only deepen his legend in Denver. And the most remarkable part is that this championship run has been about much more than just Peyton Manning.