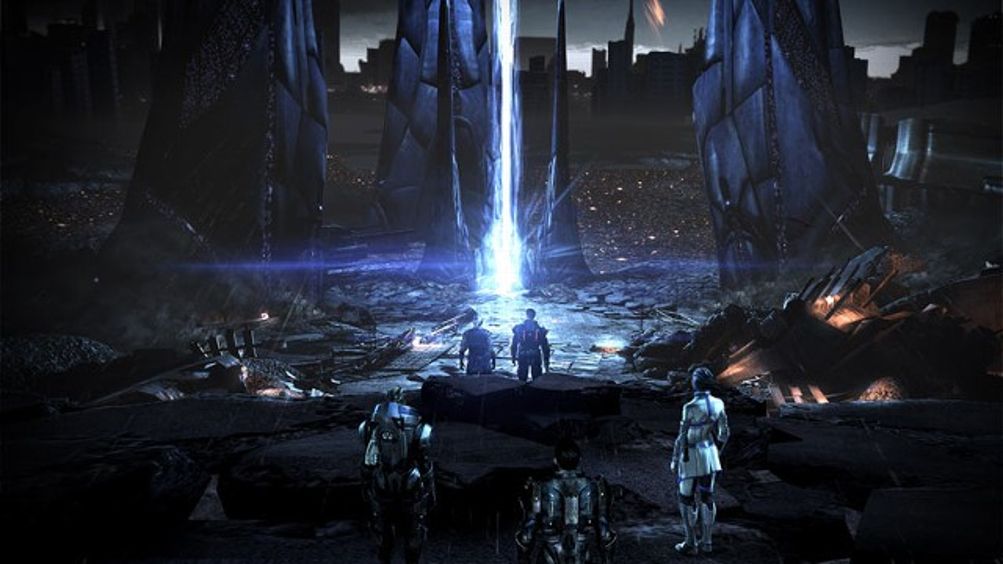 If you happen to watch this particular psychodrama play out year after year, you would not be blamed for thinking that maybe these two lunatics deserve each other. Nevertheless, a good deal of energy generated by this powerful, often unhealthy relationship winds up bleeding out into the wider industry — and in ways that sometimes get a little worrying. Is a steady diet of triple-ADD gameplay all we as gamers have to look forward to?

Which brings us to the Mass Effect series. The series’ first entry, despite technically being a third-person shooter, was the polar opposite of a manic, addled shooter experience. So polite, well-mannered, and respectful of the player! So many wonderful conversation options! So patient in how it squeaked out its interesting and absorbing story! You practically wanted to introduce Mass Effect to your parents when you were done. See, Mom and Dad? Video games aren’t all about senseless slaughter! I mean, in this one, you can actually talk the last bad guy you encounter into shooting himself in the head for you!

The second Mass Effect was gnarlier tone-wise (it contained, for instance, this character, who if I’m not mistaken can be seen dancing Thursday through Monday, 9 p.m. to 4 a.m., at Casa Diablo in Portland, Oregon), but the bulk of the game’s story was about convincing the members of your crew to like you enough to embark on the game’s final mission. Yes, that’s right. In essence, Mass Effect 2 was a 20-hour exercise in trust building. Certainly, shooting and fighting have always been a big part of the Mass Effect experience. They have never been the point, though. The point of the Mass Effect series has always been the game’s appealing world — think Star Trek optimism crossed with Star Wars mysticism plus weapons that look vaguely like hockey equipment and a menagerie of cool aliens — and experimenting with trans-species lesbianism.

Now comes Mass Effect 3, which BioWare, the game’s developer, has not been shy about branding the shootiest and most intense Mass Effect yet. It wouldn’t be accurate to say that Mass Effect 3 has succumbed to something so dire as Call of Dutyification, but there’s no question that BioWare has accepted that gaming’s behemoth franchise must be doing something right.1 For one thing, Mass Effect 3 has multiplayer, which some fans of this hitherto resolutely single-player franchise regard as an insidious form of genre betrayal. For another, when you pull your trigger and hit an enemy in Mass Effect 3, you now see those little hit-detection Xs popularized by Call of Duty‘s multiplayer, though to be fair these little guys have herpesed their way through the shooter space in general. Finally, and maybe most distressingly, Mass Effect 3 contains several emplaced-gun sequences, in which the player plants herself behind a heavily shielded bullet-spraying death contraption and liquefies anything with two legs.

Almost always I find emplaced-gun sequences (1) boring, and (2) stomach-turning. Killing stuff out of grim necessity? Gimme a gun and point me in the right direction, Major, because I’m onboard. Engaging in mindlessly wanton slaughter because some level designer thinks I’m ready to feel like a man again? It’s like being slipped a Viagra. An unbidden boner is, without exception, an unwelcome boner.

This preamble might make it sound like I didn’t enjoy Mass Effect 3‘s combat. Rest assured, I really, really enjoyed Mass Effect 3‘s combat — even, shockingly, the emplaced-gun sequences. BioWare has finally achieved the just-right combat it has been after since the first Mass Effect: tactical but not wonky, gripping but not overwhelming, varied but not chaotic, challenging but not despair-inducing. A word to the wise, though: Use your Biotic2 powers. One of my dearest friends — a professional video-game writer, at that — confessed to me that he found Mass Effect 3‘s combat boring and stale. I asked him to lie down and checked his temperature. He seemed fine. As our discussion went on, it came out that he hadn’t been using any Biotic powers. I asked him, “What the hell have you been doing to kill people?” “Sniper rifle,” he said. “I figured the powers were all dumb.” I fired up the game. With him watching, I set one dude on fire, froze another dude and shattered him with a teleport charge, and finally launched a bunch of other hapless dudes into the air with a telekinetic shockwave. “I’m an idiot,” my friend said, accurately.

Maybe the most fascinating thing about the Mass Effect franchise is the thoroughness of its between-game reboots. Mass Effect 1‘s open-world design elements, for instance, were abandoned in Mass Effect 2, which often felt like a vanilla corridor shooter. But then not one of Mass Effect 2‘s many prominent hacking, planet-scanning, or safe-cracking minigames has made it into in Mass Effect 3. A lot of BioWare fans regard these re-specs as proof of their favored developer’s saintliness — i.e., “Yay, they listened to us!” — but you could just as easily regard such actions as squirrely. I happen to greatly miss the open-world elements of Mass Effect 1 — it remains my favorite entry in the franchise for that reason — and have never understood the hostility shown to the planet-scanning minigame from Mass Effect 2. Nothing short of firing up a doobie and pulling out a lava lamp has so interestingly walked the line between compelling and tedious.

Thus the major struggle of the Mass Effect games has been BioWare’s apparent inability to properly balance action-game dynamics with more traditionally staid RPG elements such as loot-finding, customization, skill-tree-building, and the like. Mass Effect 1 clearly emerged from the school of classic RPG game design, even though it was tricked out with some relatively fancy combat mechanics. Mass Effect 2 largely stripped itself of meaningful role-playing elements, leaving the game’s above-average combat mechanics sitting in a puddle of melted RPG.

So here’s an easy call: If you liked Mass Effect 2, you’re probably going to like Mass Effect 3. A harder call would be predicting what those who loved the first Mass Effect, but were cooler to Mass Effect 2, will think about Mass Effect 3. Which is my situation. Now, I happen to regard the widely loathed shooter Kane & Lynch 2 as a peerless masterpiece, which strands me along the outer rim of representative video-game taste. Furthermore, I can easily imagine a certain type of Mass Effect 1 lover pooping all over Mass Effect 3 for having pushed the franchise’s final outing — at least for this console generation — too far into action-game territory. But here’s the magical thing: BioWare has at long last proved that it can make a game that’s both compulsively shooty and absorbingly RPG-ish without diluting either element. If you like customizing your weapons, finding pieces of armor, and dicking around with skill trees, Mass Effect 3 will be a very good friend to you. If you like shooting stuff in gorgeous environments, Mass Effect 3 will help you move across town for nothing more than free pizza. And if you like both of those things, well, you’d better take a few days off work, because Mass Effect 3‘s coming over and doesn’t plan on leaving anytime soon.

I have my qualms about the story this game tells, but then I always do. At the same time, I’m aware that BioWare’s writers have had to juggle the individual and — depending on player action — often highly variable fates of several dozen characters throughout something like 150 cumulative hours of in-game narrative time, as well as keep track of three scripts whose combined word count has, by this point, soared past the million-word mark. In light of that, the story’s occasional failure to make sense is forgivable. Slightly less forgivable is the fact that Commander Shepard, Mass Effect‘s indomitable hero, seems to meet the same two dozen people in every Mass Effect game. Is this the smallest galaxy ever imagined? It seems like it. There’s a point at which fan service becomes narrative prostitution.

A lot, finally, has been made of the fact that the male Commander Shepard can have a homosexual relationship in Mass Effect 3. It’s an undeniably welcome development that gay and straight gamers alike can push a video game’s male hero outside the heteronormative perimeter. In a similar vein, I found myself oddly moved when a male member of Commander Shepard’s crew mentioned his — that is, the crew member’s — husband. Video-game enthusiasts are, in many ways, the most reactionary and emotionally conservative audience out there. For that reason alone BioWare should continue to give gamers the chance to meet and interact with incidentally gay characters. (This is what more meatheaded gamers call “shoving the gay agenda down our throats!!”) That said, BioWare’s talented storytellers desperately need to rethink their curious devotion to the video-game sex scene, gay or otherwise, which, even at its best, remains as polygonally unconvincing as digital representation gets.

In fact, could we, as gamers, maybe politely band together to convince BioWare to can the sex scenes entirely, at least until the technology exists to make a non-hilarious one? Then again, I’m a shameless hypocrite, because I spent an inordinate amount of time as Commander Shepard trolling my crew for sex. All I can say in my defense is that, when I know Liara’s in the next room, it’s hard not to get a hankering for blueberry, if you know what I mean.

Giving the player choices doesn’t mean you have to give the player stupid choices. Over the course of the Mass Effect games, I’ve emotionally misled at least three members of my crew, cheated on two more, and seduced both of my female aides-de-camp. Why have I been allowed to play a game called Mass Effect: Shepard Gone Wild? I have no idea. Neither real-life nor video-game commanders should be allowed to seduce their subordinates; it’s beyond blockheaded even to give the gamer the option of doing so, especially when it shatters the gritty, war-is-hell vibe the game so desperately attempts to evoke. This aspect of the Mass Effect franchise feels like lonely-gamer pandering at its worst.

In all this there’s a lesson I wish more developers kept at the front of their minds, especially as games become more putatively “emotional”: Something that can’t be done well is probably not worth doing at all.