The Office Shuts Off the Lights

Back in the Day: Travel in the NBA 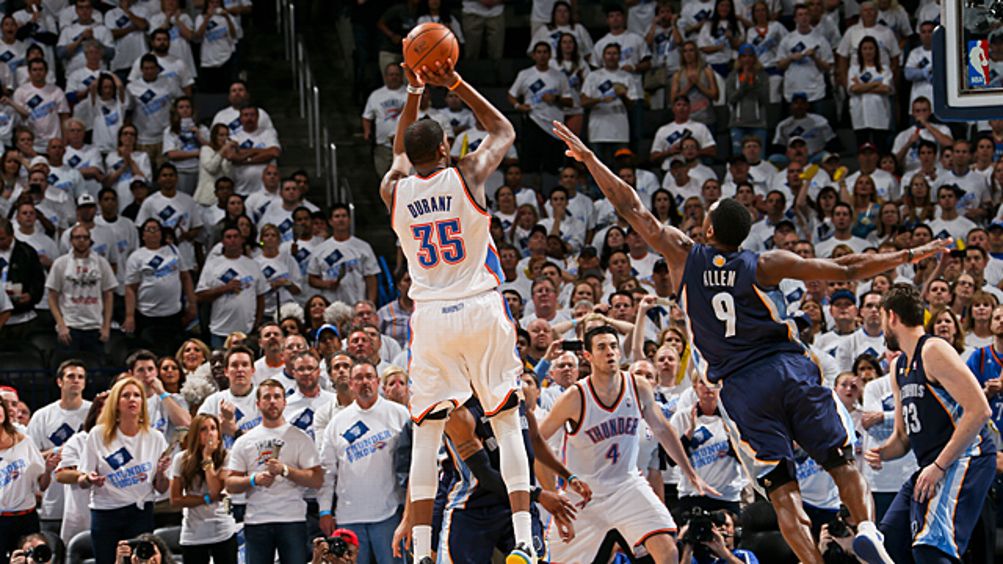 I don’t know what happened. Tony Allen threw a towel, it was weird, it was horrible. At one point near the end I felt like I was inside a collapsing star and like my eardrums might explode and like (no exaggeration) I was coming down with a profound case of tinnitus. I was there at the Chesapeake Energy Arena in Oklahoma City as my beloved Thunder lost the deciding game of their Western Conference semifinal series against the Memphis Grizzlies on Wednesday night. The Thunder lost the series 4-1 and lost the game by four, 88-84, nearly fighting their way back after spending most of the second half in a double-digit crater. They lost because my favorite player, Kevin Durant, missed the most Kevin Durant shot in this and all possible worlds, a slightly crooked 16-foot jumper from the left wing, which would have tied the game with I don’t even know how many seconds left — zero for all anyone will remember.

There’s a good chance this is about to be the worst game recap you’ve ever read. I want to be clear about that up front. I forgot to take any notes, and while I did spend $5 on a commemorative popcorn tub during a TV timeout in the third quarter, I threw it away in a daze as I left the arena. I had tucked all the info sheets that the Thunder’s press office handed out to members of the credentialed media, one of which I was, inside the tub’s commemorative outer ring, so now I have no idea how many shots KD missed (it was a lot) or how many times Zach Randolph did disturbing and unfriendly things to the Thunder defense (more than 9 million) or exactly what shade of disbelieving agony swept over Serge Ibaka’s face when he fouled out late in the fourth quarter (I believe the scorer officially recorded it as “tribulation mauve”).

I don’t know any of that stuff. We’re going to have to make do with what’s at hand.

Here’s something: When I pulled out of the parking lot it was midnight and raining and there were police lights flashing all over. It was one of those areas where you see a lot of freeways bending into each other at indeterminate elevations. Long lines of cars black-holed it into the distance, and little red and blue lights twirled here and there in the vista, as though the traffic grid were going EMERGENCY […] EMERGENCY […] EMERGENCY. I was listening to a grainy AM radio broadcast of Thunder coach Scott Brooks’s postgame press conference. He was talking about Durant, and what he was saying was, “The thing about Kevin is I live with his decisions because he has a pure heart.”

I live with his decisions because he has a pure heart. The terrible thing about losing is that it makes you sentimental. Winning makes you sentimental, too, but mostly because it fills you with an exaggerated love for the people who helped you along the way. Losing makes you want to defend the people you love who’ve disappointed you. But you can’t say that stuff, because to the people who don’t feel the loss the way you feel it, you’ll sound like a moron, or worse, a mystic. When you lose, I thought as I joined the crawl toward the on-ramp, and you want to hold on to the past that you’re afraid is about to slip away from you, you have to say the opposite of what you mean. What Brooks should have told the media was not “Kevin Durant is pure of heart”; it was “sports is the worst and it sucks and I hate it.”

It’s a crazy thing, being in a crowd whose team is clinging to the brink the way the Thunder were Wednesday night — the way they have been, really, since Russell Westbrook went out with a knee injury in late April. Crowds are generally either psychotic or ecstatic, but sometimes they reach a level that’s beyond either of those categories. The pummeling bass and cosmic-Tourette’s light shows of NBA team introductions are basically designed to send your brain into a state of extreme hysteria. There were a few moments when the Thunder crowd got fairly quiet — when the Grizzlies were up 14, when Kendrick Perkins would get singed on an entry pass and then scowl like he was putting together furniture — but mostly they just roared. They roared when the Thunder jogged out to a 7-0 lead, they roared when the of-late-erratic Ibaka hit some early jumpers … and OK, there was an anxiety in the roar from pretty early on, when it became clear that something was really off with Durant.1 But come on, it’s Kevin Durant, he’ll find his range;2 so they roared encouragement when the Grizzlies wrangled a five-point lead that lasted for most of the second quarter, and they kept roaring as the deficit grew. And then, when OKC started its run in the last couple of minutes, it got flying-saucer loud, category-shattering loud. Things seem decided on TV a long time before they do in person. I don’t know why that is, but in person, it’s easier to hope. The people who are actually in Mudville never expect Casey to strike out. Casey never strikes out! It’s only when you’re reading the poem from home that you see it coming a mile away.

What if it were actually possible to be pure of heart? If your motives and your values were perfectly aligned, wouldn’t you make really good decisions? The shot Durant missed was one he makes all the time, one we’ve all seen him hit to end games. That’s not to say that there couldn’t have been a better way to do it, and in any case the crowd roars for outcomes, not for probabilities.

None of that has anything to do with recapping the game, except as an aid to illustrate how that one moment, when KD’s jumper didn’t quite go in, when all that sound just wasn’t there anymore, could knock you emotionally sideways. Right now, minutes after that loss, what I want to say about the Thunder is this: There was a time in sports when it was easy. When being a fan didn’t mean proving your loyalty through suffering but also didn’t mean taking the team for granted. When it was just happy — and there were whole seasons, whole years, when following the Thunder was just happy. When you could show up and scream your throat raw and watch the unicycle acrobat catch plates on her forehead at halftime and have T-shirts cannoned at you and most of the time leave feeling good, because even if they lost they’d done at least as well as anyone could have expected. That probably changes now, or if not now then soon, because as soon as you expect to be happy in sports you’ll find that it gets harder and harder. A fan base can only stay innocent for so long. Suffering can be innocent, but resentment can’t be, and in the late talk-radio era resentment is bound to follow suffering sooner or later. But for a while, in the early years of Kevin Durant’s career, in Oklahoma City, it was innocent. I’d like to remember that — that it happened. I’m sure this isn’t the only time it’s happened, but it’s the only time it’s happened to me. I wish everyone who loves sports could experience something like it.

But sorry, that’s the loss talking. Nothing is innocent. It only seems that way because you don’t know it’s not, or because you ignore the fact that you do know.

What I meant to say was: Sports is the worst. It sucks. I hate it.