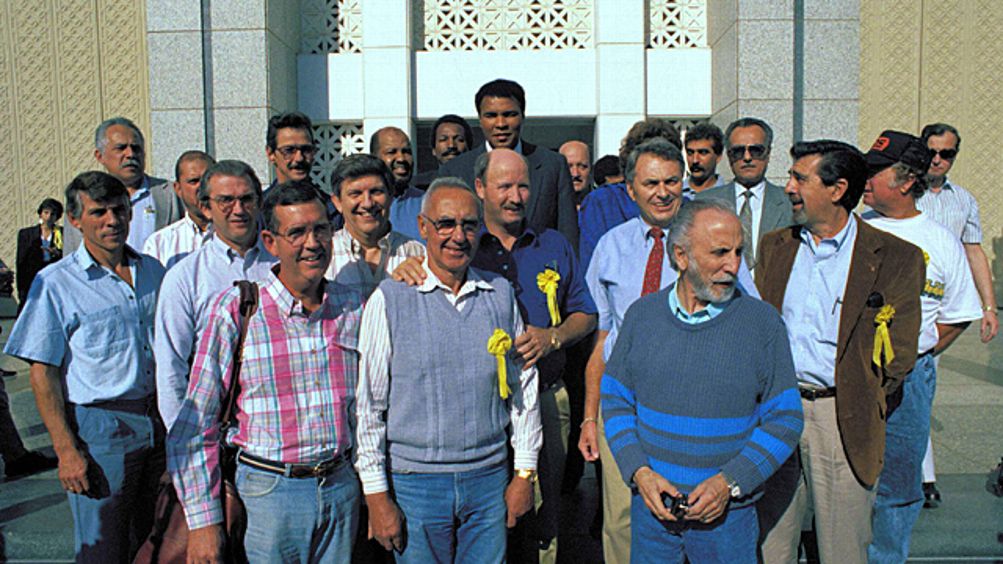 At the end of 1990, when the United States was pretending that the question of going to war with Iraq over that country’s invasion of Kuwait was still an open one, Muhammad Ali flew to Baghdad to negotiate with Saddam Hussein for the release of 15 Americans whom the Iraqi leader had taken hostage as a kind of living insurance against the attack that everyone knew was inevitable. These were not the only hostages Hussein took at the time; not long after the events described in this latest 30 for 30 short, Saddam threatened to execute those in Baghdad discovered to be sheltering anyone (especially Americans) that he might later wish to use in a similar manner. One American diplomat called a press conference at which he hung a makeshift noose around his own neck, and told Hussein, “If you want to execute me, I will bring my own (bleeping) rope.” He then sheltered more than 100 U.S. citizens at the American embassy. His name was Joseph Wilson. It was a strange, suspended time, and it was the beginning of the bloodiest chapter in the long and fateful entanglement between the United States and Iraq that spanned two decades. Plots occurred and reoccurred. Characters appeared, disappeared, and reappeared again. One war began and ended. Another war began, under strange and ultimately dubious circumstances, and seemed to go on forever. And, in 1990, as the two-decades-long drama is just commencing, here’s Ali, with his unerring instinct to move to the center of history.

There is no question that Ali’s stature around the world — and, especially, within the Muslim world — helped him spring the 15 Americans who came home with him. There is no question that, whatever the officials of the first Bush administration were saying at the time, Ali’s motives were purely humanitarian. His sickness was beginning to narrow the compass of his life, so he cannot be said to have embarked on an exercise in grandstanding. He had nothing materially to gain from doing what he did. And he put a substantial portion of his standing in the world at the mercy of the whims of a dictator. There is also no question that what unfolded since Ali left Baghdad is proof enough that history’s gifts for irony remain unappreciated.

30 for 30 is back — and this time it includes a digital short series on Grantland.

In 1990, Muhammad Ali traveled to Iraq to press a plea for peace and negotiate with Saddam Hussein for the release of U.S. civilians taken hostage after Iraq’s invasion of Kuwait.

Andy Greenwald and Chris Ryan are joined by Happy Endings’ Adam Pally and musician John Legend, who narrated the latest 30 for 30 short.

Ali had stature enough to negotiate the release of these hostages because, even as a superstar in his sport with millions of dollars and an entire career at risk, he had stood up against his own government, which was at the time engaged in a vicious and futile and unnecessary war in Southeast Asia. He had taken that stand because of his devotion to Islam, which was another reason why he had credibility in the streets of Baghdad in 1990. In both cases, his credibility was enhanced because there was a constituency for it not only in the United States generally, but also in the media, as well as in the politics of the time and even in the halls of government. Today, it is impossible to imagine an athlete putting at risk what Ali put at risk in opposition to a war conducted by the United States government. The constituencies aren’t there. The effort to dissolve them reached high tide during the war that began after Ali got on the plane home in 1990.

I was in the press room of the old Boston Garden the night the Desert Storm bombing began. Over the next several months, the industry of sports lined up behind the war effort with impressive speed and even more impressive unanimity. This was not surprising in that the country’s large media corporations — which make up the conjoined twin of the sports industry in that they share the same blood supply: namely, corporate money — got with the program in the same way. (Dan Rather, of all people, felt compelled to give the troops a salute on the air.) This was when the flag pins first popped up generally on the lapels of anchormen and, inevitably, on the lapels of announcing crews as well. Soon, the major sporting events were thoroughly militarized; the late Whitney Houston’s epic performance of the national anthem at the Super Bowl in 1991 took place amid a martial pageant that looked like what Cecil B. DeMille would have come up with if he’d had an Air Force.

There were isolated acts of protest in and around sports that owed their spirit to what Ali had done in 1967, when he declared himself a conscientious objector to the war in Vietnam. But they were swiftly marginalized, and not always politely, either. At Seton Hall, a Slovenian basketball player named Marco Lokar refused to wear the American flag on his uniform. Eventually, he was driven out of the country by the virulence of the reaction to his stand. And Nebraska basketball coach Danny Nee, himself a Vietnam veteran who’d come inches from being killed when a rocket hit the helicopter he was riding in, told a local paper that police “would have to pull me off of [his son]” before Nee would let the boy go to war. The anger exploded so violently that Bob Kerrey, a Medal of Honor recipient in Vietnam and then a United States senator, publicly expressed his support for Nee’s right to say what he had said. There was little room for an Ali in this particular war. There was little constituency for principled dissent. Not in this country, anyway. The patriotic bombast was all anyone heard. The war ended. The bombast didn’t.

In their presentation, and especially in the presentation of their most important events to the rest of us, sports had been permanently militarized. Consequently, when the country was attacked 10 years later, the infrastructure for a homogenized militarized response in various stadia and arenas already was in place. If there was little constituency for principled dissent in 1991, there was virtually none in 2001. Like every other aspect of American life, the industry of sports went into shock, and then groped its way to find some middle ground between healing and revenge. But the one thing that remained constant was the loyalty of the sports industry to the trappings and trumpets of warfare. We were told the whole country was at war. We all lived and worked and slept on this vague new battlefield. There was a war launched in Afghanistan. And then, remarkably, and under circumstances that looked dubious at the time and now look fraudulent in retrospect, another one launched against Iraq. And while the earlier war against Iraq had been attended by some propaganda — the “babies ripped from incubators” story turned out to have been helped along by a Washington lobbying firm — this latest one was birthed almost entirely from it. One of the elements was a story about Iraq having allegedly purchased a ludicrous amount of uranium from the African country of Niger. Joseph Wilson, the diplomat who’d fashioned his own hangman’s noose back in 1991 to defy Saddam Hussein, was sent to Niger to check out the story. He came back and reported that it was all moonshine. It got thrown into the case for war anyway and Wilson wrote an op-ed in the New York Times. The second Bush administration responded by outing Wilson’s wife, a veteran CIA operative named Valerie Plame. History, as I said, has an underappreciated gift for irony.

By then, of course, Ali had become critically ill and there was no desire on the part of the United States government for missions of peace anyway. The martial momentum that had steadily hummed under American institutions since the first Gulf War was now overwhelming. The flag pins on the lapels in the broadcast booths got bigger. The flyovers got closer. The patriotic pageantry at the biggest of our games got louder and more garish. What Muhammad Ali did in 1990 seemed like an artifact of another time. What he did in 1967 seemed like an artifact of another civilization. The world has changed. Heroes no longer make trouble or, if they do, as Robert Bolt’s headsman says at the end of A Man for All Seasons, they make the sort of trouble that’s expected. Courage cannot be allowed to scare the children.