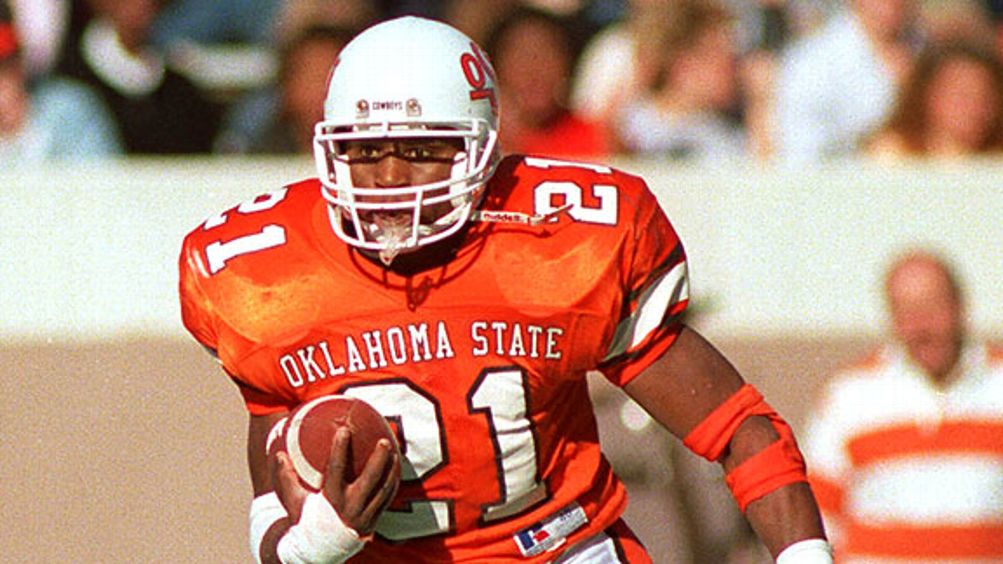 My relationship with Oklahoma State football has nothing to do with the facts. The facts are as follows: that the Cowboys, who open their Big 12 season against Texas A&M on Saturday, have been ranked sixth in the nation by the 59 Division I coaches who vote in the USA Today poll, as well as seventh in the nation by the 60 sports journalists who vote in the AP poll; that, in wins over Louisiana-Lafayette, Arizona, and Tulsa, OSU has scored an average of 52.3 points while amassing 1,224 passing yards to tie the Division I lead; that QB Brandon Weeden and WR Justin Blackmon are medium-shot Heisman Trophy candidates; and that what may not after all be the Cowboys’ final Big 12 run1 will come down to whether the defense, which is currently surrendering a cool 413.7 yards a game, can present a persuasive enough obstacle to opposing teams to allow the offense to win another eight or so hysterical screaming shootouts by a score of, say, 92-90.

All of this is true. None of it matters. Oklahoma State’s year isn’t going to be won or lost on stats, personnel, or even tactics.2 Those things have their place, but there’s something bigger where the Cowboys are concerned, something Oklahoma State fans pick up on from an early age, even if we don’t like to talk about it. It’s a hard thing to describe, so let me be as scientific as possible. Somewhere in the bones of the earth, coiling and uncoiling like the kraken, there lurks a malevolent power. And the whole purpose of this malevolent power, the entire aim of its wrathful soul, is to screw with Oklahoma State. This power has no name, so for the purposes of this article, I’m going to call it “Squinky.”

The easiest way to introduce you to Squinky is to recount the circumstances in which I first became aware of his existence. In the 1980s, my dad and I had season tickets to OSU football. This was the peak of the “Tailback U” era, during the overlapping careers of Thurman Thomas and Barry Sanders, when current head-coach-slash-crazy-ranting-person Mike Gundy was the quarterback and Hart Lee Dykes was the star wideout.3 In 1988, we watched in awe while Barry turned in the greatest individual season in NCAA football history: more than 200 rushing yards a game, 7.6 yards per carry, 3,249 total yards, 5.8 moments a game that made you feel like the top of your head had been taken off.

But this was Oklahoma, so everything came down to the OU-OSU game. In 1988, the Cowboys were 12 years deep in a losing streak against their main (only) rival. Twelve years isn’t the longest dry spell in the history of either futility or sport, but I was a kid. All I knew was that we hadn’t won in my lifetime.

On November 5, the teams met in Stillwater with the Big Eight title in play. Oklahoma was ranked eighth. OSU was 14th, having tumbled out of the top 10 when it lost at Nebraska three weeks before. The Sooners were favored, but still. We’d spent all season watching Barry make defensive ends’ helmets spin around like cartoon propellers. Nothing was impossible when he got the ball. We had hope.

We were down 24-14 at halftime, but spent the second half clawing back points behind a 215-yard, two-touchdown day from Sanders. With two minutes and change left in the fourth quarter, we’d made it 31-28 and had the ball on our own nine-yard line. Gundy found Hart Lee on two straight plays to take the ball past the 50. Sanders ran it for another first down. I started jumping up and down in front of my seat. As did all the adults in the stadium.

With 1:03 to play, on third down, Barry ran the ball to the 19-yard line. Approximately 3,451 seconds after the play ended, a penalty flag came flying in out of nowhere — a world-historically terrible personal-foul call on Garrett Limbrick, the Cowboys’ fullback. The side judge had watched OU defender Richard Dillon haul Limbrick out of bounds, then — with under a minute to play in a Bedlam nail-biter — hit Limbrick with a 15-yard penalty for saying a curse word out loud.4 Suddenly, the Cowboys were staring at fourth-and-14 from the 34 with time running out.

Didn’t matter. Everyone in the stadium still believed. Gundy took the snap from the shotgun and rolled out to his right. You could see the play breaking in slow motion. Brent Parker, the slot receiver, beat his man, then got wide-open deep. Gundy heaved the ball from the 40-yard line. The pass was near perfect. Parker’s outstretched hands met the ball at the back of the end zone. The crowd went off like fireworks. Only then — squink! — the ball grazed off Parker’s fingers and fluttered to the ground. Incomplete pass. OU ball. Mass heart attack. Game over.

It was at this point that I became aware of certain dark forces at work in the depths of the universe. Squinky had flicked a tentacle, and doom had come sweeping down the plain. It wasn’t just that the loss was painful. It was that the entire game — the entire season — had been set up to make you think, to make you know, that this time was different, this time they were going to win. Then, within seconds, a ridiculous call and an inexplicable receiver error, and all that belief caved in like a condemned building.

There were other instances through the years. Scott Blanton’s field goal as time expired to give OU the 15-15 tie — squink! — in 1992. Two straight deep runs in the NCAA tournament undone — squink! — by buzzer-beaters.5 Multiple unfathomable collapses. Even external stuff — say, a basketball coach with a checkered past painstakingly redeeming his career at OSU before losing it all in a drunk-driving scandal. OSU fans don’t get national attention as particularly long-suffering or tortured, but that’s all part of Squinky’s master plan. He’s not looking to make sympathetic, Cubs-type losers out of us. He’s looking to administer targeted heartbreak, to keep us in a state of permanently smothered optimism while giving us no media attention whatsoever.

That last point matters. Squinky is bigger than Bedlam, but Oklahoma State’s second-class, perennially half-squashed status in Oklahoma is part of what gives him his hold. If you’re an OSU fan, you get this. Even if you’ve just driven through Oklahoma — the skinny, endless, undeviatingly straight highway, the sky somehow more 3-D than the land, radio voices yammering on about OU football, always OU football, no matter if it’s the middle of March, no matter what Oklahoma State might be doing. Al Eschbach holding court on WWLS, voice like a sweat stain on the idea of sound. It’s no secret what the hierarchy is.

Factor in baseball, golf, and (especially) wrestling, and OSU arguably has the richer tradition overall. But for all that those sports matter to the day-to-day rivalry, they might as well not exist. Football isn’t so much the state religion as the state life-sustaining element, having replaced oxygen around the peak of the Dust Bowl. And in Oklahoma, where OU is football, being a Sooners fan is like having a monopoly on air.

There’s a quiet resignation that’s part of being an OSU fan, an understated fatalism that comes from sensing two things: first, that Squinky is playing you; second, that — squink! — you’re going to keep on letting yourself get played. On the message boards, older fans routinely caution younger fans not to get ahead of themselves, to wait to see how the season shakes out, to be careful about getting too invested in how things look on paper. If your dreams are fated to be broken, you need all the self-protection you can get. But eventually, the team goes 3-0, 4-0, 5-0, and everybody shoves their hearts into the middle of the table. There’s not a lot of complaining, or blaming the players, when the wager inevitably backfires. That’s just life when you’re in the thrall of a hostile demon-octopus that dwells a thousand miles below the plains.

It’s worth it, the feeling goes, because one day — maybe not soon, maybe not in our lifetimes, but one day — OSU is going to break out of Squinky’s hold, pop OU in the mouth, and contend for a championship. And when that happens, you don’t want to be the guy who checked out two years ago simply because the constant stifled agony had become too soul-annihilating to take.

So this season — just like last season — the Cowboys are a ton of fun to watch. Weeden is dishing out points in ways that are easier to express with equations. Blackmon can make your eyebrows shoot up higher than your scalp. And the defense … well, there’s a rumor that an upperclassman has been spotted roaming around somewhere deep in the secondary. But whether the Cowboys will be really, genuinely, jaw-smashingly good or just pretty ’til the hammer drops, as it does every year, this is the season they finally break free from Squinky. There are men on the message boards, careful men, men who have been around this block before, who are saying that something feels different, that this could be the year. Players are peaking at the right time. The team has incredible leadership. Nobody’s scared, even if OU is the consensus top team in the country. Heading to College Station to meet their first credible challenge in the form of eighth-ranked A&M, the Cowboys couldn’t have much more confidence. Squinky’s being put on notice.

Come to think of it, it’s not as though OSU had a bad season last year, either. The Cowboys went 11-2. “Their only losses were to Nebraska and Oklahoma,” as analyst Roger Twibell recently noted. Looking ahead toward this season, he said, “Everybody thought, ‘This was going to be the year.'”

No, wait, sorry, that’s the wrong quote. Twibell was the announcer who called that Bedlam game during Sanders’ Heisman season. He was talking about 1988.

Previously from Brian Phillips:
The Problem with Novak Djokovic
The Brash Style in American Tennis
When We Need Our Barbarians
Corruption, Murder, and the Beautiful Game: On FIFA’s scandalous history
On the Border: A look at the soccer rivalry between the United States and Mexico
The Long Autumn of Roger Federer