Welcome to the Basketball Bag

I never had a chance to submit my thoughts on the Jason Kidd trade, which was a shame because the Mavs-Hornets game Wednesday confirmed my worries about the deal for Dallas. There’s no question the Mavs needed a blood transfusion, and you can’t totally kill any basketball trade when a contender acquires someone like Kidd without giving up a lottery pick or anyone in the top three of their rotation. I just don’t think Kidd necessarily makes them better. 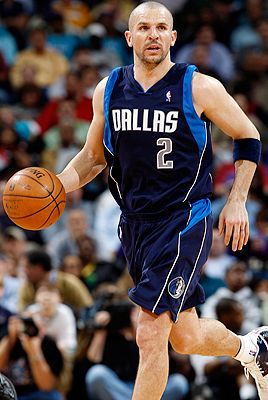 1. Kidd can’t shoot. I mean, he really can’t shoot. He always has been useless as a 3-point shooter, but nowadays he can’t even get to the rim like he did during his heyday. Just look at his numbers. During the ’03 season, when he would have been the MVP if not for a career year from Tim Duncan, Kidd averaged 18.7 points, got to the line five times a game, shot 41 percent from the field and averaged nine assists and 6.3 rebounds for good measure … and that was two years before the league changed the hand-check rules and allowed point guards to start dominating. If Dallas was getting THAT Jason Kidd? I’d be standing and applauding. But the ’08 Jason Kidd is shooting .366 from the field, scoring 13 a game and averaging 2.2 free throws, which tells me he’s not driving to the basket anymore.

Now, look at this particular Dallas team. The Mavs have one guy who can consistently create his own shot (Dirk Nowitzki), one guy who catches fire from time to time (Josh Howard), one good shooter (Jason Terry) and one scorer who might be washed up (Jerry Stackhouse). I keep hearing Kidd is going to get everyone easy baskets, but their three best scorers (Dirk, Howard and Terry) are already shooting around 47 percent. How much easier can he make it for them?

Dallas was missing a guard who could create shots for everyone and carry the offense every time it got stagnant — because, after all, the current defensive rules are geared toward helping penetrating guards do their thing — and every other Western contender has a guy like that except the Lakers (who don’t need one because they have Kobe) and Rockets (who can’t be taken seriously because they don’t have one). Phoenix has Steve Nash. Denver has Allen Iverson. New Orleans has Chris Paul. Utah has Deron Williams. Golden State has Baron Davis and Monta Ellis. San Antonio has Tony Parker and Manu Ginobili. Portland has Brandon Roy. If you don’t have a guard who can take advantage of the current rules, that’s a legitimate disadvantage, especially in the last five minutes of a close game when defenses clamp down and it becomes tougher to get good shots. In this respect, I don’t see how Dallas got better by getting Kidd.

(One other wrinkle here: For a team like the Suns, this trade doesn’t bother them if they end up meeting Dallas in a series. Not only can Nash blow by Kidd whenever he wants, but, defensively, he can play 5 feet off him and double another player. It’s no different than if Devin Harris was still on the team. It really isn’t.)

2. The benefits to having Kidd on your team are simple: He’s completely unselfish, he’s competitive as hell, he makes everyone a little bit better, and he’s better than everyone but Nash at running fast breaks. The first three traits help Dallas just like they’d help any team: Kidd always has been one of those players who gets better with better teammates, as he proved during every All-Star Game and even the Olympic trials last summer. Still, it’s his creativity and consistency on fast breaks that make him special … and that’s what confused me about the trade from Dallas’ end. Have you watched the Mavs? Who’s running with Kidd on that team other than Howard? Dirk is slow. Erick Dampier is slow. Terry doesn’t go within 20 feet of the basket. Stack stopped running five years ago. Who’s left?

Anyway, every time I had a conversation about Kidd in New Orleans last weekend, I asked the question, “Yeah, it’s great for the Mavs and all, but who the hell is running with him?” I couldn’t get past it. And if you watched the Mavs-Hornets game, the thing that stuck out was Kidd’s teammates (everyone except Howard) chugging to keep up with him. In fact, there was one play in the third quarter when Kidd took off with a rebound and beat his teammates down the court by 8-10 feet, realized nobody else was with him, screeched to a stop at the foul line and had to dribble back out and wait for everyone else to show up. Switch Nowitzki for someone like Amare Stoudemire and switch Jason Terry for someone like Monta Ellis, and I’d be saying, “Wow, awesome trade, this is gonna be unbelievable!!!!” But Dallas doesn’t have the right teammates for him — it’s a halfcourt team and, to be honest, he’s not a great halfcourt player anymore.

3. Once upon a time, Kidd was a destructive defensive player, one of the best defensive players in the history of the point guard position. The thing that made him special was his ability to guard anyone under 6-foot-8. (Remember in the ’02 playoffs when he shut down Paul Pierce?) You could unleash him on anyone like a pit bull. And he was so good at planting his feet and taking a charge on layups and dunks, he was single-handedly responsible for the NBA extending that little semi-circle under the basket. Unfortunately, that guy is long gone. He can’t handle great point guards anymore, and if you watched that Hornets game, the enduring image was Paul killing Kidd in the third quarter to the point Dallas had to switch Terry on him. Paul’s final numbers: 31 points, 11 assists, nine steals, five rebounds. What else can you say?

Look, I have Kidd ranked as one of the 50 greatest players ever, as well as one of the best eight point guards ever. But at this point of his career? I’d take seven point guards in the West over him: Paul, Williams, Nash, Davis, Iverson, Parker and Ellis. So you can’t tell me he pushes Dallas from “fringe contender” to “genuine contender” — the upgrade from Harris to Kidd just wasn’t significant enough, and that’s before you factor in what the Mavs lost with DeSagana Diop (their best shot-blocker and low-post defender), or the eight-figure financial bump in salaries and luxury-tax expenses. If you’re a Dallas fan, the trade made your team more interesting this season (as opposed to “fairly uninteresting”) and you have a significant trade chip next season (Kidd’s expiring contract in 2009 for $20 million). Just don’t think you’re winning a title, because it’s not happening.