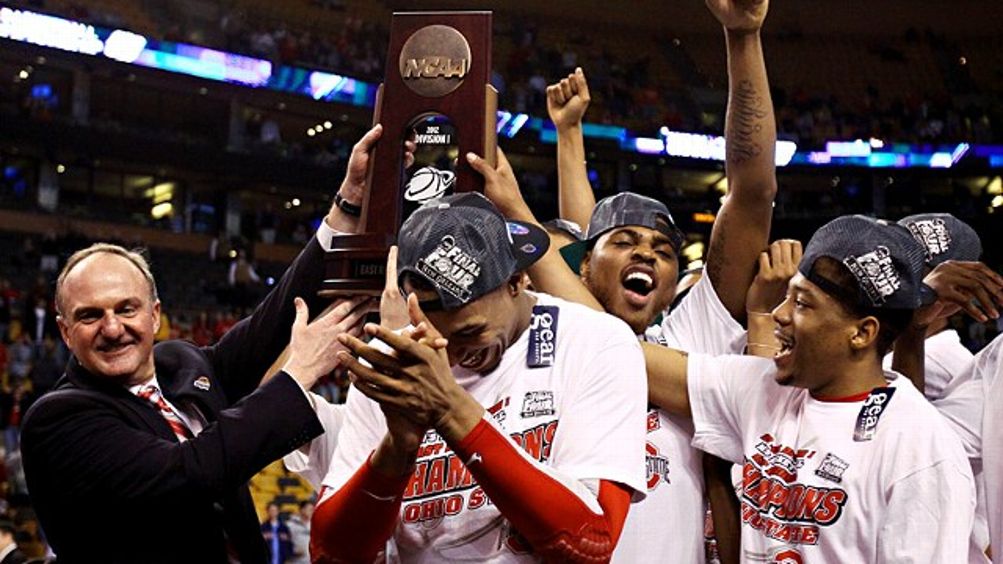 When Ohio State was finished with Syracuse on Saturday night, when the last Boeheimian grimace had faded and the last ill-timed and misbegotten whistle had tootled off to its last echo, it became plain that the game had been a perfect microcosm of the East Regional it had concluded, and that the regional had been a perfect microcosm of the NCAA tournament itself. It was enjoyable but not memorable. It was tense but not dramatic. It was exciting but it left barns unburned, nails unbitten. It hung from no cliffs, this one.

The 77-70 final had the Buckeyes running things out at the free throw line, which is not the stuff of network promotional material five years hence. (Speaking of which, what was the deal with those portraits of the players that CBS kept putting up in which everyone looked like they were on the cover of Interview magazine? “In this edition, Scoop Jardine talks with Andy Warhol.”) Ohio State simply wore the Orange down, breaking them up inside even with star forward Jared Sullinger sitting out most of the first half with two fouls, and outrebounding Syracuse by a fat 37-22. The Orange finally paid a price for the absence of center Fab Melo, who I believe went to high school at the Parliament-Funkadelic Christian Academy on the planet Lovetron, and on whom the legendary iron fist of Syracuse’s academic standards came crashing down shortly before the tournament began.

(This game concluded a fairly distinguished annus horribilis for the Orange, what with the molestation charges against longtime assistant Bernie Fine, the revelations that — horrors, no! — some of their players in the past had smoked dope and played anyway. To say nothing of Fab’s losing battles with the various syllabi. This wasn’t a basketball program. It was a new HBO series, except that no horses died.)

It was a grind-it-out final of a grind-it-out regional in a grind-it-out tournament. Lenzelle Smith Jr., the Ohio State guard who hit at least three big shots in the second half, had to pass on the postgame interview, and most of the celebration, because he was getting his head stitched up for the second time that night. “This team is still so young,” OSU coach Thad Matta said, “and you’re still trying to learn what gets them going. I’ve kind of enjoyed that challenge because they’ve been receptive to what we’ve asked them to do. As we tell them all the time, the more you give of yourself, the more that’s going to come back to you.”

What’s left is a Final Four full of brand names, because a grind-it-out tournament lends itself to the chalk. When the closest thing you have to an underdog coming out of the brackets is Louisville, the most profitable college basketball program in the country, then the concept of what an upset is becomes almost hilariously elastic. And even that’s going to be drowned out by the multimillion-decibel bullroar that’s going to surround the game between the Cardinals and the University of Kentucky.

Make no mistake. The Louisville-Kentucky game is going to capsize the Final Four before it ever gets started. The two schools hate each other like poison, going back to the days when that virulent old racist Adolph Rupp wouldn’t schedule Louisville because he was afraid Wes Unseld would kick his ass. That alone would be enough. Add to it, however, the two-man carnival of egos that is Rick Pitino against John Calipari, the latter a Mordred-like presence in the career of the former, tracking Pitino’s career path almost perfectly, from a beginning in Massachusetts to an unsuccessful stint in the NBA to wild success upon returning to the college ranks. If there hasn’t been drama on the court, there is now high melodrama off of it. The raw, extravagant diva-tude on display is going to be enough to make the French Quarter look like a papal high mass. Because things are only what they are sold to be these days, this is already the Louisville-Kentucky Final Four. Ohio State and Kansas — while massive sports-entertainment conglomerates in their own right — are the supporting players. There is something to be said for supporting players. Sometimes, they’re doing the only real work worth watching.

Before proceeding further, let us pause here and salute John Higgins, Michael Nance, and Thomas O’Neill, our NCAA-approved game officials for the evening. Let us state for the eternal record that, if CBS ran any commercials for that new Three Stooges movie during Saturday night’s game, they were completely redundant.

(Yes, yes, I know. Hardest Job In The Game, right? You know what else is a hard job? Being Aaron Freaking Craft, the pestiest pest on a planet of pests, the Ohio State point guard, who played 39 minutes until he fouled out. You know what’s another hard job? Laying all those cables in the arena, that’s what. And if you don’t do it well, and three cheerleaders get electrocuted on live television, you don’t get to plead how hard your job is. It’s hard work being a referee. It’s even harder when you’re bad at it.)

The trio began destroying any flow the game had early on. With 13:42 left in the first half, Syracuse guard Dion Waiters went to the basket. Sullinger, who already had a foul, put up his hands, backed away, and generally did everything you can do to avoid a foul without also being suspected of shaving points. He got whistled anyway. Out he went for the rest of the half.

That was the pattern — calls being made on what it looked like might happen, or being made on what seemed to be happening. Both teams were in the bonus by the 12-minute mark of the second half. That they continued to play as hard as they did was a tribute to the players on both squads.

Nevertheless, Sullinger’s departure was a pivotal moment, and it was Syracuse’s one great opportunity to make any kind of run at the Buckeyes. That they didn’t was completely a function of the two guys with whom Thad Matta was able to steal the last two-thirds of the first half.

First, he went to Evan Ravenel, a granite-browed escapee from Boston College whom Marcellus Wallace would have hired on sight. Ravenel sets a ferocious pick, and he is even more immovable under the basket than Sullinger is. He played nine crucial minutes in the first half, during which time he scored three points, grabbed a rebound, and helped Ohio State stay within two points. Then, Syracuse’s Scoop Jardine cut from right to left through the lane and got hit by his own center, Baye Keita. The whistle blew and Ravenel got the foul, probably because he was the only Buckeye within three feet of the shooter. That was his second, so out he went, replaced by 6-foot-11 freshman Amir Williams, who had played a little over 22 minutes in the previous month. The first thing Williams did was get lost in transition and get his head dunked on by C.J. Fair.

“Coach told us all at practice, get back because Syracuse is so good at transition,” Williams said later. “I just made a mistake and didn’t know where the man was.”

“At the beginning of the season,” said Ravenel, “maybe Amir hangs his head when that happens, but he’s matured every day in practice. You can see it.”
After Fair’s dunk, Williams tapped himself on the chest and went immediately back to work. “Coach, you know, he’s not the kind of guy who gets on you for that one mistake, as long as you’re still out there playing hard.”

He hit a couple of free throws, swatted a Kris Joseph floater halfway to Revere, grabbed a big rebound in traffic, and then converted a feed from Deshaun Thomas into a resounding dunk on which he blew through both Fair and Joseph on the rise. That gave Ohio State back the lead at 27-25. They would trail only one more time the rest of the game. His nine minutes, three points, four rebounds, and two blocks, along with Ravenel’s earlier contribution, made the entire protracted exercise through which Ohio State won the choppy, graceless game possible. And afterward, they were in the locker room while the stars were on the podium. They were wearing the new gear, T-shirts and baseball hats with slivers of the nets hanging from them. Evan Ravenel was talking about Amir Williams, and it was all about promise. Tomorrow, it appears, starts next weekend.

“I can’t wait to be done and come back and see Amir play one day,” Ravenel said. “I think he’s gonna be a beast.” If there’s no flow to the present, the future’s the only thing that moves.