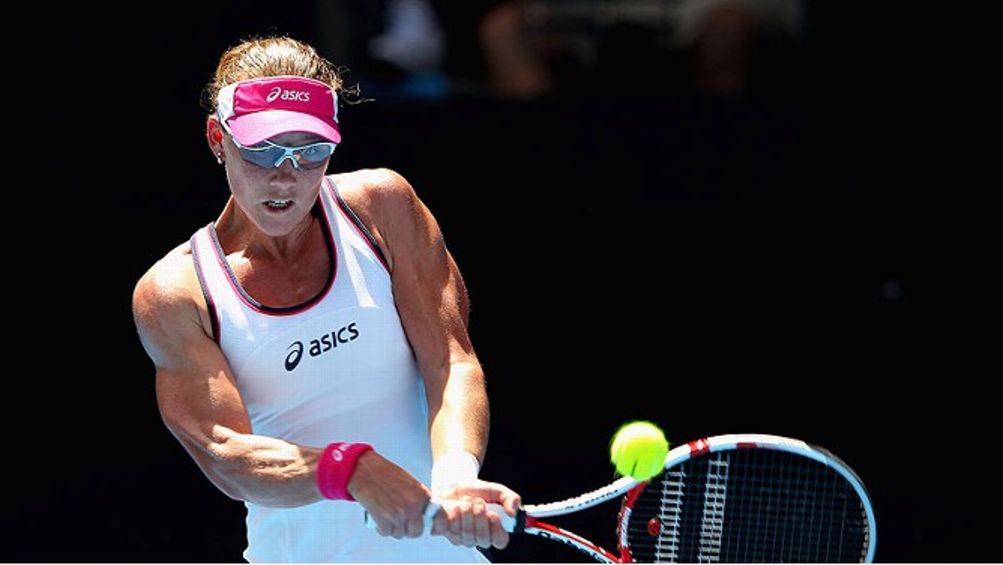 When Serena Williams announced, “I don’t love tennis today” during her first post-match press conference of 2012, some people were disgusted, some were sympathetic, some were disappointed, and a lot of people shrugged. Serena seems to like lighting fires. Still, I couldn’t help but wonder whether a few other top players didn’t secretly feel the same way as they headed into the Australian Open in Melbourne. It was hard to shake the sense that some of them were a little … troubled.

Now that the major tournament has begun, the focus is on the tennis again, and the tennis is wonderful. You can tell the players are eager and hungry now, if only because of the vibrant intensity of their play: Vika Azarenka raising her game to the level of her grunting in a 6-1, 6-0 win over Heather Watson in the first round, say, or Maria Sharapova hammering Gisela Dulko 6-0, 6-1, or Novak Djokovic winning 6-2, 6-0, 6-0. There are already promising storylines, reasons to watch. The unseeded Australian Bernard Tomic thrilled the crowd with his goofy, gawky, and at times brilliant game in his five-set win over the no. 22 seed, Fernando Verdasco, and everyone is waiting to see what the young Canadian sensation Milos Raonic, who won his first round in Melbourne, will do. Will a new player emerge as no. 1 on the women’s side? Can Novak Djokovic carry over his spectacular success into a new year? Does Roger Federer have another run in him? Will Andy Murray’s new coach, Ivan Lendl, help him win that elusive major?

This grand slam is as significant as any other, if not as storied for Americans (in part because, until the 1980s, when travel became easier — sort of — some top players skipped it). If you’re a casual sports fan, distracted by basketball and the exploits of Eli Manning, you might not even know that one of the majors is under way, but there’s nothing runty about the Australian Open. In terms of prize money ($2.3 million to the winner — the most of any slam) and attendance, it’s the biggest major of all. With China in its backyard, it has great potential for worldwide popularity.

Still, there is some lingering unease this year going into it, some bad feelings. They’ve been brewing for a while. The disgust that Andy Murray, Rafael Nadal, and Andy Roddick displayed for the handling of the rainout at the U.S. Open has not disappeared, and the genteel gatekeepers of the tennis world have been unable to whitewash it. The players are tired. Their “offseason” lasted barely a month. In the past few weeks the players have been shuttling from Monaco to Doha to Melbourne. They were playing in Chennai, in Kooyong. They’re hurt. Soon after she delivered her incendiary press conference, Serena rolled her ankle and had to bow out of the Brisbane International with a sprain. Kim Clijsters withdrew, too, after her hip began to bother her. Nadal has been suffering from a bad shoulder, and when he sat in a chair in his hotel room this week he felt his knee pop. Federer, who prides himself on never pulling out of a tournament, pulled out of a tournament earlier this month with a back injury. Andrea Petkovic, the tenth-ranked woman, has a stress fracture in her lower back and isn’t playing in Melbourne. Venus Williams is out because of the autoimmune disease she was diagnosed with last year. I could go on.

But jet lag and injury just describe the life of a professional athlete. There was something else going on during the first two weeks of January. There were, for instance, tears. Caroline Wozniacki had her wrist taped during the third set of her loss to Agnieszka Radwanska at the Sydney International last Wednesday, but I doubt the pain is really why she looked a little teary. Jarmila Gajdosova cried after Marion Bartoli beat her 6-0, 6-0 during the Hopman Cup in Perth the week before. There was also anger. At the Hopman Cup, Mardy Fish, normally known for his easy vibe, reportedly spat in the direction of a cluster of Bulgarian fans during his match against Grigor Dimitrov; he later swaggered toward Dimitrov so belligerently that officials had to separate them. Nothing was more unnerving, though, than the way Nadal continued to look lost on the court. As 2011 wound down, Nadal, bewildered by Djokovic’s dominance, admitted he had a “little bit less passion for the game.” This week, he retracted his words, said the passion was totally back, and then showed how disgruntled he really was. His tiff with Roger Federer over publicizing labor disputes — it was all very nice for Fed to be a “gentleman” while others “burned,” Nadal said — may have been smoothed over (“Don’t create crazy histories about what I said yesterday, please,” Nadal begged the press), but Nadal seemed seriously pissed. You have to sympathize with him a little. His whole sense of how the world works — of how a ball spins — was undone by Djokovic last year. But I’m not sure I’d want to be Djokovic right now, either. In the few matches he’s played this year, he has played as loose and fast and strong as ever — but there’s no way a win at the Australian Open would launch him on the kind of run it did last year. Any conceivable result is bound to be a little bit of a letdown.

And for good measure, a nasty little controversy surrounding the tournament flared after Margaret Court, one of the greatest players of all time, winner of eleven Australian Open titles, raised the volume of her bigotry against homosexuality, which she recently called an “abomination” in an interview. One of the show courts in Melbourne bears her name.

Tennis players are professionals. The game is their job. Who, on some level, doesn’t resent her job? Players don’t need to love the game to be great, or to feel passionate about it to play with passion. Most players, anyway, probably do love it on some level — whether or not they love it today. Serena Williams isn’t the only athlete with a complicated attitude toward sports, and even she added that she “can’t live without it.” So who cares whether or not she’s happy doing it? When I watched Samantha Stosur play her first-round match at the Australian Open, I couldn’t help but think that I do.

Four months ago, Samantha Stosur was ecstatic. She had just won the U.S. Open, her first grand slam title. She was the first Australian woman to win a major in 31 years and the first Australian woman to win the U.S. Open since, yes, Margaret Court. She won it by doing what no one else could do: She dominated Serena Williams, and she did it by playing Williams’ own aggressive style. She also showed superior poise, refusing to be rattled by Williams’ outburst at the official following a controversial call. “I can’t actually believe I won this tournament,” she said afterward.

Neither could anyone else. No one doubted Stosur’s skills. She has the best second serve in the women’s game, a sweeping, spinning arc that kicks high and mad. She’s one of the fittest and strongest players, with biceps so prominent that they have their own Twitter account (@SamsBiceps), and she uses her quickness to step around her backhand and strike devastating inside-out forehands, allowing her to control play from improbable angles. When she’s playing well, when she’s in a rhythm, she’s one of the most fun players to watch — such athleticism, such power, such anatomy! Last year’s U.S. Open was not the first time she’d attracted admiring attention. During the 2010 French Open, she beat both Williams and Justine Henin and reached the final. She had shown that she could beat anyone.

She had also shown she could lose to anyone. Sometimes she looked like she didn’t know her own strength, or her own mind. During the year and a half that followed her loss at the French, she appeared lost everywhere. She felt lost, too, she says, never more so than in April of last year. She’d just been beaten by Elena Vesnina in the Family Circle Cup in Charleston, South Carolina, a tournament she’d won the year before, shanking her final return into the stands. Afterward, desperate, she called her sports psychologist, Ruth Anderson. “We spoke a lot, and that was probably one of the more difficult times that I went through,” she said following her U.S. Open win.

There is a pleasingly simple version of this story: Stosur is defeated in the 2010 French Open final, a match she’s supposed to win. She loses her confidence, hits bottom, turns to psychologist who screws her head on straight, and finally emerges triumphant at the U.S. Open. As her coach puts it, the win gets the monkey off her back. The Australian post office puts her on a stamp.

We could even make her story more stirring by calling attention to the real adversity Stosur had to overcome. In 2007, Stosur woke up at Wimbledon with a lump on the side of her neck; headaches, serious swelling, nausea, chest pains, several misdiagnoses, and a spinal tap later, she was diagnosed with Lyme disease. She was away from the tour for nearly a year. After her win at the U.S. Open, though, she proved herself to be an extraordinary physical specimen: an athlete, a winner.

This kind of story relies on straightforward progress. It suggests that once you’re a winner, you keep winning. You’re Djokovic. But what if you start to lose? Ask Nadal: It’s not pretty.

On the women’s side, every player to win a slam last year either did not play or lost in the first or second round of the following major. This isn’t to say those players won’t win slams again, or won’t win often. Petra Kvitova, the winner of Wimbledon, will probably claim the top ranking within the next few months, possibly the next few weeks; she is the consensus favorite going into Oz. Still, Wimbledon was not the immediate coronation that some predicted. For several months following her victory on the grass, she played terribly. Sometimes winning doesn’t get the monkey off your back. Sometimes winning is another monkey.

“I’m sure there was times where I didn’t want to talk about anything and just forget about it and try and shove it under the carpet,” Stosur said after winning the U.S. Open. “But I guess I didn’t. Guess it’s all worth it.” Guess it was, but it’s still a struggle. Stosur started 2012 by losing in the second round of the Brisbane International two weeks ago and the first round of the Sydney International last week.

“You do all the work leading up and feel okay,” Stosur said following her loss in Sydney, “and then today all of a sudden it’s just like a bombshell hits you.”

Seeded sixth, she played the unseeded Sorana Cirstea of Romania in the first round of the Australian Open. Cirstea rocketed her returns, followed short balls into net, and stretched Stosur wide off the court with her backhand. Stosur had to stab at the ball. She hit 33 unforced errors and lost in straight sets. “This is like your worst nightmare unfolding,” the commentator said near the end of the match. “She must be feeling absolutely terrible inside.”

Immediately afterward, Cirstea was interviewed on the court. “Probably the whole country hates me right now,” she joked. She sounded incredibly happy.

Louisa Thomas is the author of Conscience: Two Soldiers, Two Pacifists, One Family — a Test of Will and Faith in World War. Follow her on Twitter at @louisahthomas.