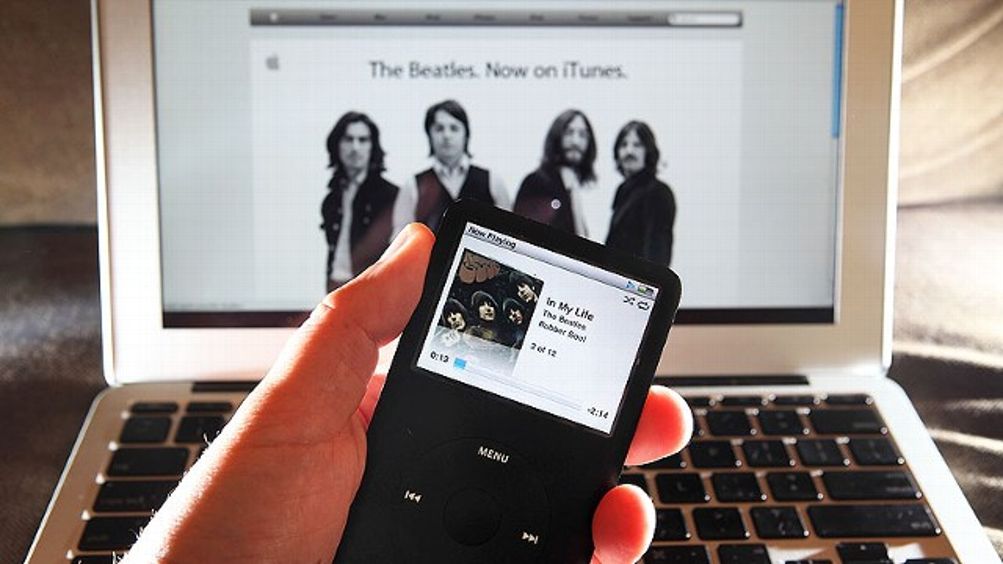 Last Saturday, thousands of aging hoarders lined up at their local record stores (or more likely record store) to overpay for limited-edition collectibles containing music they can probably already hear for free on the Internet. I would denounce those who support the annual hustle known as Record Store Day as Luddites if I didn’t happen to be one of them. But I am. Setting aside the structural issues of a record-company cash grab that’s dubiously profitable for the local businesses it’s supposedly designed to support, I am a believer in the principle of brick-and-mortar stores continuing to sell plastic-and-oil-based physical media in 2013.1 I prefer to shop for music in the real world, where I can hand over cash to a human being after spending a leisurely hour leafing through stacks of cool-looking objects with my actual hands. I’d argue that the ritualistic aspect of buying tactile, beautifully packaged music objects intended to be played without doing anything else at the same time enhances the listening experience. If it seems like music has been devalued in our culture — if it’s thought of less as an art form with the ability to move, edify, and define us and more like one of the lesser apps on our smartphones — maybe getting away from this experience has something to do with it.

Hello? Anybody still there? Sorry, didn’t mean to lapse into my old-man “nothin’s no good no more” routine. I’m not here to pontificate on the sanctity of record stores. Let’s talk instead about a retail outlet that didn’t participate in Record Store Day: the world’s largest seller of music, iTunes. April 28 marks the 10th anniversary of Apple’s digital music store, and it remains a dominant player in the record business. According to a report released last week by the research firm NPD, iTunes presently accounts for 63 percent of digital music sales, with Amazon MP3s coming in a distant second with 22 percent. As an overall piece of the industry pie, sales of downloads were up 5 percent in 2012, versus a hefty 13 percent drop for compact discs.

If you love your local record store, you definitely need to be patronizing it more than once per year, because a small but loyal battery of shoppers with money to burn on Johnny Marr 7-inches won’t be enough to stave off the rapid deterioration of its product base. But before you grab a pitchfork and shake it at the evil specter of Apple, remember that downloads may soon be as antiquated as CDs. Sift through the rosy statistics for digital sales and a less promising reality emerges: The gains made by downloads are sluggish compared with the exploding reach of streaming services like Spotify and Pandora, which saw a 59 percent increase in revenues last year thanks to listeners willing to pay a nominal subscription fee (or sit through ads) in exchange for access to libraries with many more songs than they could ever purchase. And there’s no sign that this trend has any hope of reversing course. Incredibly, from a customer loyalty standpoint, your neighborhood vinyl hut might have a better long-term prognosis than iTunes.

If it’s too early to write an obituary for downloads,2 you don’t have to be a music-industry expert to detect a faint whiff of decomposition. The progression from single-buyer downloads to a universal cloud-based system is both logical and seemingly inexorable. For people who prefer downloads because of the convenience and voluminous stock of digital stores, streaming services are even more user-friendly and offer a wider selection of songs for your buck. Plus, downloads require storage and (unlike good ol’ vinyl) have virtually no worth to anyone else after you purchase them.3 But the celestial library — which is infinitely updated with new music — is always accessible and never a burden.

If you need official confirmation that iTunes is going the way of Sam Goody, look no further than Apple, which is in the process of building its own Pandora-like online radio station. While the service, nicknamed “iRadio” in tech-media circles, hasn’t been formally announced, Apple reportedly is getting its streaming house in order, negotiating with record companies for licensing agreements in advance of an expected launch later this year. But unlike iTunes, where Apple’s control of the market allowed the company to dictate terms to desperate record labels, iRadio (or whatever it’s ultimately called) will be just one of many players in a crowded market.

Apple getting into the streaming-music business is surely meant to help iTunes, allowing listeners to sample new songs and steer them to the store to purchase the music for their personal collections. The jury is still out on whether this tactic actually works: A 2011 study by NPD and the National Association of Recording Merchandisers found that average fans — dubbed “converts” in the survey — spend far less when they have access to streaming services. Again, simple logic is not on the side of downloads, since the difference between listening to a digital song you’ve purchased and a digital song you’ve rented is essentially nil. As NPD analyst Russ H. Crupnick told the New York Times, “If you are an average music fan, there’s a higher chance that listening will just lead to relistening.” Streaming music is a lot more likely to compel so-called “superfans” — i.e., the packaging fetishists who prop up Record Store Day — to buy. These people make up only 10 percent of consumers but account for nearly 50 percent of the spending.

Back when iTunes was introduced in the early ’00s, it was common to refer to the new century as “the iPod era.” The depth and passion of the media’s love for those sleek, ivory-colored, handheld monoliths knew no bounds. You couldn’t swing a pair of white earbuds without hitting a magazine or a website conducting an iPod shuffle feature, where semifamous musicians and comedians gushed about the random output of their magical MP3 players. There were also books like Steven Levy’s The Perfect Thing, which dutifully recounted every worshipful detail about how the iPod was conceived, engineered, sold, and bought. This wasn’t just another mass-produced corporate product; the iPod was a mode of self-expression, a revolutionary force shaping modern life, a new prism through which we perceived and understood the world. The iPod’s sex appeal was so vast and all-encompassing that iTunes — the program you had to have if you wanted to, ahem, insert your music collection into your iPod — was sultry by association.

In retrospect, the iPod turned out to be just another mass-produced corporate product. Apple’s original tagline — “1,000 songs in your pocket” — seems adorably quaint now. One thousand songs! Hot dog! Next you’ll tell me that I can watch an entire season of Game of Thrones over the course of a few weeks, so long as I mail these red envelopes back promptly!

The iPod era is reminiscent of MTV in the ’80s and early ’90s — what initially appeared to be a sea change in music presentation was actually just a transitional period between sea changes. When the history book about pop music delivery systems is written,4 MTV will be a footnote in a narrative about how radio was usurped by YouTube. MTV was a music-video channel for roughly a decade because technology hadn’t yet caught up with consumer demand.

Likewise, future generations will wonder why on earth anyone would want a device that only played music. The iPod era is long gone; iTunes’s legacy is finishing off ownership as a meaningful concept. When iTunes emerged as the legal alternative to Napster and LimeWire, the idea that music must tangibly belong to you for it to have personal value had already begun to erode. With iTunes, what you bought was data; the stuff that once existed around music as a matter of course — everything from artwork and liner notes to the culture of record-shopping — was edited out of the transaction. In the digital realm, albums were stripped down to the barest of possessions, to the point of virtual invisibility (in the figurative and literal senses). Last week’s NPD report enthusiastically notes that 38 percent of U.S. consumers still feel that owning music is important — if this figure is cause for celebration, then you know the prospects for downloads must be dire. It certainly seems unlikely that this number will go up in the future. Why would it, now that pop-music capitalism is selling music-listener socialism?

The stubborn survival (and even modest revival) of vinyl suggests there’s a segment of music fans who still prefer the pleasures of traditional ownership over the portability and practicality of digital music. People continue to buy vinyl records because they enjoy the process of buying and playing vinyl records. I wonder if there’s a similar constituency for downloads. Shopping on iTunes was never fun; pushing that blah-gray “Buy” button might’ve been easy and utilitarian, but so is filing your taxes online. Back in the Wild West of P2P networks, I admit to engaging in all-night file-sharing binges and gorging madly on records I was never able to find in stores. I feel a trace of nostalgia for those days, as do others, I’m sure. I could see hipsters one day holding “Throwback MP3z” DJ nights, spinning “vintage” mislabeled files with substandard bit rates. But if there’s ever a Record Store Day for iTunes, I think I’ll pass.