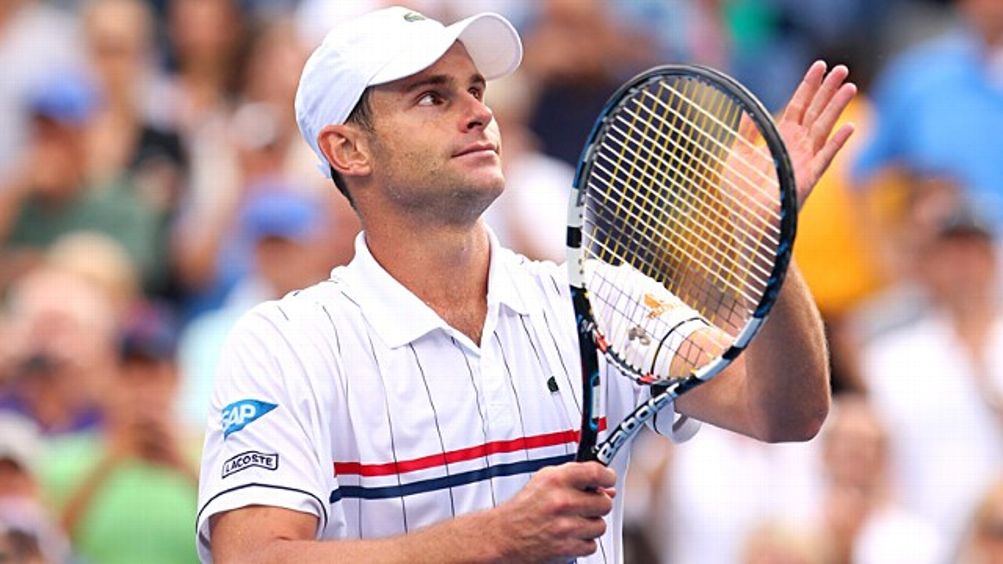 Andy Roddick used to remind me of a certain kind of guy. A guy whose style tends toward bro. A guy who has plenty going for him, but whose intentions are just a little too apparent. Look at his sudden ball toss and the abbreviated motion of his serve. It’s as if he’s trying to ambush his opponent while moving with the subtlety of a truck. Or look at the way he crouches and cranks his shoulders when he prepares to crush a forehand. Recently, though, it’s been hard not to feel tender toward him.

As a rule, athletes become more likable as they near the end of their career. In Roddick’s case, the need to acknowledge who he is and what he has meant for the game seems especially urgent. It seems almost anxious. From the moment Roddick announced that this tournament would be his last, reflections on his life and career have come quick and thick. The 2012 U.S. Open has turned into one big Andy Roddick appreciation event. And somehow, that’s felt right. It was impossible to watch Roddick’s announcement without becoming a little emotional, or to start watching clips of him doing, frankly, pretty much anything without wanting to watch more. In a sport where vivid personalities can be hard to find, he stands out. Yesterday, I had an e-mail exchange with a friend about Roddick that touched on bikini models, water polo, oil paintings of animals, himbos, handball, clubbing, smart young lawyers, and bad breaks.

Besides, for all the grief he’s gotten over the years — for his temper tantrums on court, for his failure to continue the run of American dominance in men’s tennis — he deserves the praise, the standing ovations, and every defense of his career. He spent nine consecutive years in the top 10. He has demonstrated his total commitment to the game and to helping young American players. His off-court charitable work is outstanding; his press conferences are great theater. And someone had to lose to Roger Federer. For losing to Roger Federer, Roddick will always have my respect.

I mean that sincerely, not snidely. He was a great and memorable loser. When we talk about good losers, we usually mean gracious ones. Roddick wasn’t that. He paid his respects to the winner, but he didn’t smooth over any feelings or try to pretend that he was happy just to have made it as far as he did. He was sometimes prickly or sarcastic, sometimes funny, sometimes prideful, sometimes frustrated, always honest. After Roddick lost to Federer in the semis of the 2007 Australian Open, a reporter asked him how it was. “It was miserable. It sucked. It was terrible,” he answered. “Besides that, it was fine.” After he lost to Richard Gasquet at Wimbledon in 2007, he told reporters, “I’d love to make you understand what it feels like in the pit of my stomach right now.” Last year, Roddick was dismantled so completely by Rafael Nadal in the quarterfinals of the U.S. Open that the crowd had fallen silent in horror. In the post-match press conference, Roddick was asked to relive it.

Q. Can you describe the feeling when you know that Rafael Nadal is hitting on all cylinders and you’re trying to summon something and it’s just not there?

Q. Were you able to have fun at all today?

Roddick: I didn’t have a lot of fun today, no. But it’s early.

Andy Roddick won a lot — 32 career titles (including the 2003 U.S. Open), more than 600 matches, and more than $20.5 million in prize money. But the defeats defined him as much as the victories — probably more than the victories. Losing, by itself, didn’t make him special, of course. Most players lose in every single tournament they enter. What made him special was the way he could talk about it and the way he could deal with it. Being crushed in the worst ways somehow didn’t crush him. Even after the Wimbledon final in 2009, you somehow knew he’d be OK in the long run of his life. That was what was so impressive — not just his hustle, not just his drive, but his indomitability.

It’s sometimes said that Roddick was unlucky to play in the shadow of Federer. That argument never made total sense to me. Maybe Roddick would have won more major finals if, in four of them, he hadn’t had to face arguably the greatest player ever, but Roddick always struck me as the kind of guy who wanted to compete against the best of the best. Looked at that way, Roddick was lucky to come up when he did. And, in a sense, so were we. During the (first) Federer era, the men’s game changed. It became quicker, more athletic, more dynamic, more precise. Roddick was on the front end of that. He had a more limited game and couldn’t quite keep up, but he hung in there.

For Roddick, the 2009 Wimbledon final against Federer was a nightmare, but for tennis fans, it was a gift. It was one of the greatest Wimbledon finals ever played, and it was far more impressive than Roddick’s 2003 U.S. Open victory, when he won by bludgeoning his opponent with his serve and his forehand and little else. In 2009 he faced an opponent who could do it all. For more than four hours, Roddick did it all, too. We would be talking about his career differently if he hadn’t missed that backhand volley into an open court during the second-set tiebreak, or if he hadn’t pushed a few balls long. But the point is that Federer made Roddick better. And Roddick made Federer better, too. Federer surpassed Pete Sampras in the record books for most career men’s major singles titles. Roddick made it as hard as possible.

That sounds like a backhanded compliment. I know that some people criticize Roddick for not being Federer, or for not being able to develop a style that would devil the Swiss, the way Nadal’s style does. I guess you could worry about the decline of American hegemony and point to Roddick’s backhand as evidence. After all, he was supposed to be the next in a line of great American champions. Roddick was born in Omaha, Nebraska, in 1982, just two weeks before Jimmy Connors won his fourth U.S. Open. He started playing tennis at a time when the country was home to a string of champions: Courier, Chang, Agassi, and, above all, Sampras. During the 1990s, an American won at least one major every year. In 2003, Roddick seemed to be picking up where those players left off. He won young and seemed to promise more. That was the burden Roddick carried and the pressures he faced. It was the fundamental fact of his career. “When I was coming up, it was Andre and Pete,” Roddick said after Agassi retired. “Then it was [just] Andre. Now it’s us [Roddick, Isner, Fish, Querrey, etc.], and we have to step it up. That cushion isn’t there. My training wheels are gone.” Roddick was the only one of them who consistently stepped it up. But he wasn’t a prima donna among them. (To linesmen, that’s another story.) He was their friend, and to a younger generation, including Jack Sock and Ryan Harrison, he has gone out of his way to be a mentor. He treated his countrymen as a player in another sport would treat his teammates. At the same time, unlike Agassi and Sampras and Courier, during the late rounds of majors, he had to carry the flag alone.

In fact, Roddick does seem to embody America in some essential way. The man has the stars and stripes splashed across his shoes. He committed himself to helping his country win the Davis Cup with the same intensity that he threw himself into winning slams. He lives in Texas. Given the chance, he dated a pop star and married a model. Roddick is a mess of contradictions that speak to a kind of enduring American stereotype: smart-ass, arrogant, and intemperate, but also straight-shooting, generous, and thoughtful. He wasn’t the best — but he lived up to that old American slogan that he did his best.

“I keep hearing how great all these guys hit the ball,” Sports Illustrated quoted Roddick saying. “People just drool over so-and-so’s this or that. And then I hear how I can’t really do anything. But yet, I beat all these guys consistently. That kind of lends itself to me being a really good bad player.” Talk about backhanded compliments. But Roddick didn’t pretend he was something he wasn’t.

For an example of how much that meant, look no further than Roddick’s second-round match against Bernard Tomic. Tomic is a young, talented, and unusual player, a quarterfinalist at Wimbledon last year. One of the reasons Roddick indicated that he’d chosen his 30th birthday to announce his coming retirement was that there was a solid chance he would lose. Roddick has had an up-and-down year, hampered by injuries but winning two titles and even beating Federer. Still, most people weren’t favoring Roddick in the match.

But he spanked Tomic — and Tomic folded, losing so badly that he faced accusations of tanking. Roddick won his next match, an entertaining scrapper against Fabio Fognini. And suddenly it appeared that he might have found some magic in the warmth of the adoring crowd, that he might be able to ride this wave of affection deep into the second week. In the fourth round, he faced another former U.S. Open winner with a huge forehand, Juan Martin del Potro. Over the course of two days, with rain interrupting the first, Roddick pushed del Potro, winning the first-set tiebreaker and losing the second. But del Potro, who reminds me of a rangy bear with a grizzly’s swipe for a forehand, shook off his sleep. Once he started moving well, it quickly became clear that Roddick would lose.

After Roddick went down two quick breaks in the third set, there was a consensus in the commentators’ box that Roddick should conserve his energy and write off the set. Roddick seemed to hear them — or maybe he was just too tired to move with the same intensity he’d shown at the start. But down double-set point on del Petro’s serve in the third — in a set in which Roddick didn’t have a chance, in a game that, from a tactical point of view, he would be better off losing — he was still scrambling, sliding, desperately reaching for the ball. It was like he couldn’t help himself; he had to try. But he pushed a backhand long.

Soon after that, it was over. When he lost, there were no Americans left in the tournament. Yet again, he had been the last one standing. Does that matter? I don’t think so. The top men are playing sublime tennis, and I don’t care what their nationality is. They are playing the kind of tennis I love to watch. But the sport will still miss Roddick, and so, it turns out, will I.