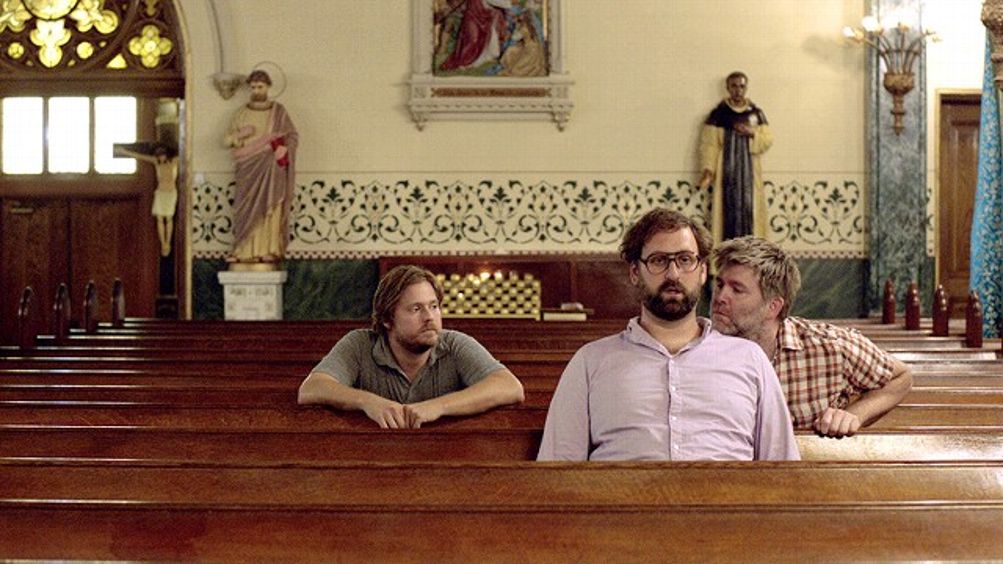 I just watched this movie called The Comedy, and I need to talk about it. There’s a lot to say, but let’s start with the last scene: The main character, a potbellied and possibly sociopathic hipster doofus named Swanson (played by Tim Heidecker of the cult comedy institution Tim and Eric Awesome Show, Great Job!), has just biked to a desolate-looking New York City beach. The physical strain of this trip is emphasized by a tight close-up on Heidecker and his labored breathing, which sounds like a woolly mammoth having a heart attack. On the beach, Heidecker removes his sweat-stained shirt and unleashes the fleshy tapioca mudslide that’s been oozing around the edges of his too-tight clothing for the entire movie. He dives into the ocean. The waves appear rough but refreshing. Soon he is joined by a small child, who magically materializes to splash and frolic with Heidecker in the water. Then the movie stops. It doesn’t end, it just stops.

I suppose this scene can be read as a simplistic metaphor about The Comedy‘s main character “cleansing” himself after finally stepping out from behind the protective facade of the reflexive irony, playful cruelty, and impotent machismo that typifies a certain kind of modern dude that everybody between the ages of 21 and 35 knows.1 Or it might signify nothing. This scene is hardly among the most memorable or significant moments of The Comedy. Talking about it isn’t the least bit spoiler-y. All the potential spoilers in The Comedy occur in the middle of the movie. There is a would-be sex scene with a truly sickening denouement. There is a scene set in a bar featuring some of the most obnoxious and discomforting acts of racial insensitivity in contemporary pop culture outside of talk radio and the Transformers films. (IFC notes that this part “elicited many walkouts” when The Comedy screened at Sundance last winter.) There is a scene that sets a record for most mentions of the otherwise slept-on phrase “prolapsed anus.” There is more ickiness, but you get the idea.

Knowing how The Comedy ends shouldn’t discourage you from seeing it. I bring it up only because it’s the one part of this movie that is not actively repellent.

Weirdly enough, I loved The Comedy. It has remained in the front of my brain ever since I saw it a week ago. (The Comedy is available on VOD and is playing in select cities, though I’d guess not for long.) I have never connected with Tim and Eric’s deconstructionist brand of fart-on-your-pillow anti-comedy, but I thought Heidecker’s performance was a fearless, incredible exhibition of tightly controlled, passive-aggressive rage turned in on itself. It reminded me of how a young Jack Nicholson once channeled the generational alienation of burned-out hippies by turning soulful asshole-ism into an act of protest. (More on that later.) I feel like The Comedy is the most culturally relevant movie I’ve seen all year, for a specific segment of the population.2 In 20 years, when people want to understand what it was like to live in 2012, The Comedy (I’m guessing) will seem authentic in the way really great “downer” ’70s cinema represents what we’ve come to understand about the Watergate era, or “edgy” ’90s indie movies will forever suggest about the cultural idealism of fashionable twentysomethings in the Clinton era. Not that I expect that the majority of filmgoers will actually want to see The Comedy in 20 years (or tomorrow). I won’t argue with anyone who loathes The Comedy or has no interest in seeing it. It fully earns whatever hatred it is bound to inspire in many viewers. The Comedy is funny the way the films of Harmony Korine or Ween’s “Spinal Meningitis (Got Me Down)” are funny. It’s possible that the people who walked out on The Comedy “get it” better than I do.

In the coming weeks, we are going to be inundated with year-end media coverage explaining what 2012 “means” in a variety of social, political, and cultural categories. The Comedy will be too niche to make an impression in these retrospectives, though I personally think it deserves a place in a discussion about the proliferation of “requiem for indie” entertainment this year.

If there are still people left on planet Earth who believe in the sanctity of a thriving underground subculture populated by young, principled artistic types living bohemian lives free of the conventions propagated by lamestream plebs, here is a not-quite comprehensive rundown of pop culture items from 2012 that (intentionally or not) seemed directed at disabusing this idea: Lana Del Rey’s Born to Die, the HBO show Girls, the LCD Soundsystem concert film Shut Up and Play the Hits, Bon Iver singer-songwriter Justin Vernon’s Grammys acceptance speech, Justin Timberlake’s Justin Vernon impersonation on Saturday Night Live, fun.’s Some Nights, the New York Magazine cover story on Grizzly Bear and the untenable economic realities faced by high-level indie-rock bands, Taylor Swift’s “We Are Never Ever Getting Back Together,” the white-people-giggling-over-R&B-covers-on-YouTube novelty act Karmin appearing on the cover of Rolling Stone, that good but sort of unlovable Animal Collective album, Daniel Johnston’s “True Love Will Find You in the End” appearing in an Axe body spray commercial, this weekend’s New York Times piece on “hipster irony.” I could go on but, in the interest of space, I won’t.

Whether those critiques are explicit or implicit, textual or subtextual, sympathetic or sneering, the notion of indie exceptionalism (and its white, urban, and upper-class trappings) was repeatedly questioned this year, almost always by the very people who benefit from it. Indie-ness in 2012’s pop culture has been depicted as an outmoded cliché, an indulgence for the rich and deluded, a jokey lyrical reference, a house of cards, and/or a pile of cool clothes for pop stars and corporations to try on and discard.

Heidecker plays Swanson as a man who treats interpersonal communication as an act of violence; he’s what Larry David would call a “social assassin,” though “social serial killer” is probably more accurate. Swanson kills for pleasure, he kills compulsively, and he’s indiscriminate. During an endless and unbearable scene with a cab driver who lets Swanson drive his car in exchange for the wad of hundred-dollar bills that Swanson thoughtlessly waves in front of him, he repeatedly says, “no disrespect” to underline precisely how disrespectful he’s being. This is also his mantra during the aforementioned (and seriously awful) scene3 where Swanson visits a bar patronized predominantly by African Americans — because it’s located in a gentrified neighborhood that’s about to be overrun by craven lifestyle junkies like him — and hollers, “Where are your fucking bitches, man?”

The Comedy shares some thematic DNA with Girls, though Lena Dunham’s world is far kinder and less shrill and about 100 times less dudely. Dunham’s Hannah is similarly wary of the future. She’s more likable than Swanson, but not that likable. Hannah is selfish, a lot less special than she thinks she is, and pursuing a doomed relationship with her meat-tuxedoed bf, Adam. She is this year’s model of a cultural archetype that has lost its luster.

People who hate The Comedy (and possibly Girls) will argue (with good reason) that the indie exceptionalism it eviscerates is also what makes a film with such a narrow scope possible. The Comedy won’t play to audiences in Bismarck or Sheboygan, and this is obviously by design. As off-putting as The Comedy is, it feeds into the vanity of those most like the characters on-screen. If this is true, what does that say about the audience? That, at best, they accept the premise that their lives are cinematic shorthand for soullessness? Or, at worst, that they inhabit an impeccably curated hellscape filled with bitchin’ stuff but no substance? What have they done to believe that they deserve to be subjected to a film like The Comedy?

The most frustrating movie-watching experience I had in 2012 — loads more frustrating than even The Comedy — occurred in March, when I caught a screening of Shut Up and Play the Hits at South by Southwest in Austin. A concert film about LCD Soundsystem’s final show, at Madison Square Garden in April 2011, Shut Up cuts between ecstatic live performance footage and deflating clips of the group’s lead singer and mastermind, James Murphy, loafing around the Kubrickian blankness of his Brooklyn apartment and struggling to rationalize his choice to end his very successful band during an interview with Grantland’s Chuck Klosterman.

The split between music and offstage material in Shut Up and Play the Hits is roughly 75-25, but it’s the offstage stuff that ultimately stuck with me, mainly because I resented those parts for constantly pulling me away from the music. The impression the movie gives is that James Murphy made a very reasonable decision to not take LCD Soundsystem to the next level of popularity — where it will be playing venues the size of MSG in every city — in order to live a normal life with his cats and voluminous record collection, and that he realized almost immediately after his last concert that he made a big mistake. Shut Up ends with a heartbreaking scene (spoiler alert!) during which Murphy breaks down in LCD’s former rehearsal space. He knows his career as a musician isn’t over — LCD Soundsystem was essentially a solo project in the studio — but he’s also willfully retreated to the safety of a smaller, relatively hermetic existence by severing his most meaningful connection with the outside world.

One of Murphy’s first post-LCD projects was acting in The Comedy, in a mostly dialogue-free role as one of Swanson’s aimless, dead-eyed pals. I don’t think Murphy is supposed to be playing himself, but it’s not crazy to assume that he is. Shut Up and Play the Hits is the low-stakes, indie-rock version of Gimme Shelter, the Rolling Stones Altamont movie about the limits of community and the destructive burden of naive dreams. Gimme Shelter is the product of a time when people (bravely, wishfully, stupidly) believed in the power of collective culture; Shut Up and Play the Hits reflects a more self-aware period when every partygoer is routinely reminded that we all wind up alone.

The Comedy brings to mind another “requiem” film from 1970, Five Easy Pieces, in which Jack Nicholson opts for ducking out of post-Altamont society by hopping aboard a semitruck headed for parts unknown up north. Five Easy Pieces was knowingly constructed as a statement of rejection against the maelstrom of bad vibes that arrived in the wake of failed ’60s utopianism. It was made for people who could no longer stand the world. The enemy lurking inside The Comedy is more troublesome. It’s aimed directly at people who can’t stand themselves.