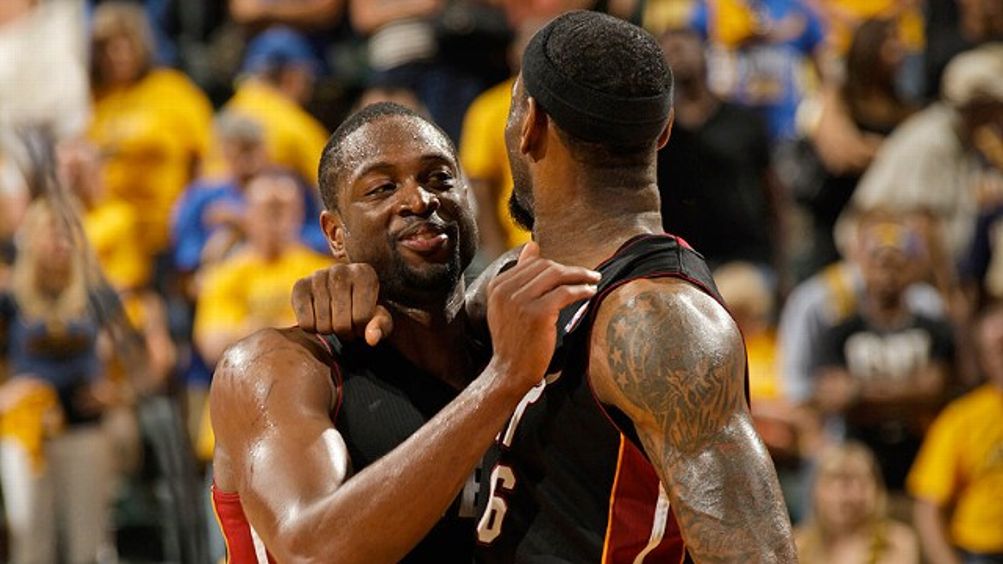 It is a remarkable thing to see when people decide to stop disgracing themselves. Not disgracing oneself can be contagious. First, one guy decides to not disgrace himself any further, then another guy does, and, pretty soon, an entire team is not disgracing itself, and that can be a wonder to behold, especially if the team is as good and talented as is the Miami Heat. This is because the better you are, the more thoroughly you can disgrace yourself. Therefore, when you decide, as a good and talented team, that you will no longer disgrace yourself, well, the results are more spectacular than if, say, the Charlotte Bobcats decide to no longer disgrace themselves because, well, how could you tell in the first place, really?

And, make no mistake, over the course of Games 2 and 3 of their playoff series with the Indiana Pacers, the Heat worked very hard at disgracing themselves. Game 2 featured LeBron James’s rather famous missed free throws, and also had James passing up the final shot in favor of Mario Chalmers. Game 3 had the Pacers simply running the Heat into the floorboards, 94-75. In those two games, Dwyane Wade was a grotesque 10-for-35 from the floor, and spiced things up by getting as chippy as one of the Hanson brothers along the way.

(Wade was so frustrated that he gave himself a mental-health day, visiting in Bloomington with Tom Crean, who’d coached him at Marquette and who now coaches at Indiana. “I needed to check in with the guy who’s a mentor, a father figure,” Wade said. “He had film of me, of my last couple of games, and of when I was going good. Coach always has film.”)

(And, just to prove that it was not just the Heat for whom the moon was in Stupid, Pacer Lance Stephenson, who is only marginally more relevant to this series than Mel Daniels is, got caught giving James the choke signal from the bench in Game 3, which, as we shall see, may have been giving the lion one too many pokes with the pointed stick.)

Then came Game 4 yesterday, and it looked very much at the beginning as though the Heat were quite at ease with the possibility that they would trail Indiana three games to one by the time the moon next brought its talents to South Beach. The Pacers ran out to a 9-0 lead, helped immeasurably by Miami point guard Mario Chalmers, who contributed three turnovers and two blocked shots to the general malaise. Wade again seemed to have checked out, not scoring at all until well into the second quarter. However, it was James who had decided from the jump to stop disgracing himself, and he went at the job with astonishing ferocity.

He kept Miami close completely by himself, putting up 19 points and five rebounds in the half. He only had two assists, but one of them may have been the most important one of the series. With 43 seconds left in the half, and Miami trailing by seven points, James found Wade sliding from left to right down the baseline and slipped him a pass. Wade went up and threw down a dunk that had nearly 100 minutes of frustration behind it. And, even though Indiana still led at the half by 54-46, a sea change in attitude was slowly creeping over Miami and, especially, over Dwyane Wade.

“I didn’t say anything to him for a reason,” James said later. “He’s one of the best players in the world … but I know that the best thing for a scorer who’s struggling is to get him an easy one, so I got him a backdoor pass that he was able to dunk.”

The transformation completed itself on a bizarre play in the third quarter. Immediately after halftime, Wade seemed once again as though he might be sliding into the curious funk that had plagued him throughout the series. (On the very first Miami possession, he slung the ball angrily from the top of the key to the left wing and then shook his head in half a dozen tiny shakes, as if to clear something foul from his memory.) But, with 5:20 left in the quarter, and 25 feet from the basket, Wade spun and fell to the floor. Truth be told, he probably traveled, but he got the ball to James, who fed it back to him. Wade then drained a 3-point basket that put Miami into the lead for the first time all afternoon, 64-63. It was also an indication that the guy who was drawing rim shots from two feet in the first half was gone for good.

“As shooter, you just want to see one go in,” Wade said. “When ‘Bron gave it back to me, I caught it in rhythm and you could tell I wasn’t thinking of anything. I was just playing basketball again.”

The rest of the way, the two were everything they were supposed to be when they joined up in Miami. In one stretch extending from the end of the first half through the beginning of the second, they accounted for 38 consecutive Miami points. Wade ended up with 30 points, nine rebounds, and six assists, several of them to Udonis Haslem, the undreadlocked forward who hit four crucial buckets down the stretch. And James was otherworldly, scoring 40 points and adding 18 rebounds. He wasn’t passing anything up yesterday.

“You know the way it is with this team,” said Miami forward Shane Battier, nattily attired in a bright-pink dress shirt and a towel, his feet stuck in an ice bucket. “Whenever we drop a game, it’s like, ‘Burn ’em! Burn … whatever it is that they burned in medieval times.”

There is something endearing about the way Indianapolis has embraced the Pacers, something so determined about how they link the fact that the entire city has sold its soul to the athletic-entertainment complex with their desire to remain small-town Hoosierland in their devotion to the team.

(I’m not kidding about the first part, either. This is a city that tore down a dome to put up Lucas Oil Stadium, which looms over the highway looking for all the world like Noah’s Ark on the side of Mount Ararat, only more expensive. This is a town that wanted the NCAA to come and set up shop.)

So you get a new basketball arena that’s bigger than Albania, and you sell the naming rights to a bank, but you call it a “fieldhouse,” and you have 85-year-old Carl Erskine, the former Brooklyn Dodger great, play the national anthem on a harmonica. This wasn’t Hendrix at Woodstock, but it was altogether charming and a blessed relief from all those hometown Lady Gagas who stretch out the “land of the free” so long that you wish the British had won back in 1812 and saved us all the nuisance.

(And, by the way, Chicago? If Indianapolis can have a former pitcher playing the anthem on the harp, why can’t you give us James Cotton or Charlie Musselwhite? Y’all should be ashamed, you should.)

The Pacers are of a piece with the whole scene — earnest craftsmen, all of whom know their roles. Prime among them yesterday was Darren Collison, the whippety guard from UCLA who was the only physical matchup for whom Miami had no answers. He regularly beat Chalmers off the dribble and got layups before the help from the weak side could get there. He ended up with 16 points on 6-for-7 from the floor. “The way this series has been,” he said, “I was waiting to get hit, but it never came.” He also made the highlight play for his side, stripping James at the top of the circle and then sailing off the other way, hitting a layup on which he got belted by three people, then cashing in on the ensuing free throw.

“He’d been getting into the paint all day,” Collison said. “That’s what he does. That’s what Wade does. That’s why they’re superstars. I just hoped he’d turn the way he did, and he brought the ball right into me. I was just trying to make a play.”

He made one. They made a couple dozen, because that is what they’re supposed to do — but the Heat prevailed, 101-93. Sooner or later, you decide to not disgrace yourself anymore. So you stop, and then you realize how very far you had to fall.