The links  with an all new format

As I watched Chris Webber holding his own with Charles and Ernie on TNT on Thursday night, I found myself thinking, “Holy crap, C-Webb could end up being a fantastic TV guy!” 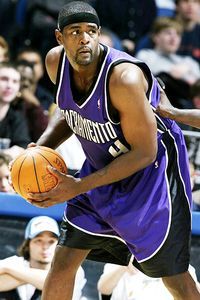 Will it happen? Who knows? I just found it interesting; even during the week Webber retired from basketball, people were still wondering about his potential. Of all the great players who passed through the NBA and never fulfilled their promise, Webber was the only one without a legitimate excuse. Bernard King and David Thompson had drug problems and knee problems. Connie Hawkins was derailed by a college point-shaving scandal. Pete Maravich developed too many bad habits in college and played for too many crummy teams in the pros. Derrick Coleman and Vince Carter weren’t nearly tough enough or competitive enough. Shawn Kemp, Marvin Barnes and Micheal Ray Richardson were fundamentally unequipped to handle the day-to-day pressures of being a wealthy basketball star.

Webber was different. On paper, he had everything you’d ever want from a power forward — superior athletic ability, soft hands, a world-class post-up game, the rebounding gene, even the passing gene — and nobody played that position who had more natural gifts. His background couldn’t derail him because he hailed from a middle-class, two-parent family, attended a respected Detroit prep school and learned early on how to juggle an Eddie Haskell-like public persona with a much more urban private persona (as Mitch Albom illustrated so wonderfully in his classic sports book “The Fab Five”). He shined in the biggest spotlight possible at Michigan for two seasons, and along with his teammates became a genuine trendsetter in the early ’90s with their chest-thumping, yelping, baggy shorts and everything else. Everything that happened during his first 20 years seemed to be setting up an influential and successful professional career. Looking back at every No. 1 overall pick since the ABA-NBA merger, only five guys were unequivocally considered to be sure things: Ewing, Shaq, Duncan, Magic and Webber.

It’s not like C-Webb had an atrocious career or anything. He made five All-Star teams, an All-NBA first team and three All-NBA second teams. He won the Rookie of the Year in 1994 and a rebounding title in 1999. Starring for a series of memorably entertaining Sacramento teams from 1999 to 2003, he was the second-best power forward alive and submitted a three-year peak of 25 points, 11 rebounds and five assists per game. He also earned a staggering amount of money; considering the Warriors, Bullets, Kings and Sixers paid him contracts worth more than $185 million combined, it’s possible Webber earned more money playing basketball than anyone other than Jordan, Shaq or Kevin Garnett.

For just about anyone else, it would have been a successful career. With Webber, we’ll always have a nagging sense that his career should have turned out differently. During his “prime” (1994 to 2004), he played 70 games or less in nine different seasons, missed 283 of a possible 870 games and battled a never-ending assortment of freak injuries, culminating with a knee tear in Sacramento that robbed him of his explosiveness and forced him to change his style on the fly (although he somehow remained effective for a few more years). Webber leaves us with two fascinating “What ifs?” beyond the obvious “What if he stayed healthy?” question (a question that could be asked about dozens of other quality players over the years):


1. What if Orlando had kept his draft rights instead of trading him for Penny Hardaway and three No. 1s?

Wasn’t C-Webb the ideal power forward to play with Shaq, considering he was a great passer who could play the high post, crash the boards, run the floor and defend the rim? What NBA team in the mid-’90s could have matched up with the Magic? Hell, they already had Scott Skiles, Nick Anderson and Dennis Scott, and it’s safe to say veteran free agents would have been fighting each other in the street for the right to sign with Orlando and play with Shaq and C-Webb. Everyone forgets this now, but the Penny/Webber decision was widely panned at the time, especially in Orlando, where everyone was giddy about teaming Shaq and C-Webb. I never understood that trade. You can always find guards; you can’t find a franchise center and a franchise forward at the same time without completely defying the Lottery Gods.

(Important note: Orlando was swayed by Penny after an incredible workout days before the draft that GM Pat Williams described afterward by saying, “I’ve never seen someone come in and do the things that Penny Hardaway did in that workout, aiming passes and dunks that would have had crowds screaming in disbelief if they had been there.” My buddy JackO and I have been joking about that workout for years – unless Penny was making shots from halfcourt while stepping on broken glass and balancing an orange on his head, there’s no freaking way that one workout should have swayed the Magic from a Webber/Shaq combo.)


2. What if the Warriors hadn’t traded the No. 3 pick and three No. 1s for C-Webb, then stupidly given him a massive contract with an opt-out clause after one year?

When his relationship quickly deteriorated with Don Nelson (who learned you couldn’t ride rookies if they were making 10 times as much money as the coach), Webber held out and eventually forced G-State to panic-trade him for Tom Gugliotta and three No. 1s. That particular Warriors team was coming off a 50-win season without Tim Hardaway (knee surgery); now Hardaway was returning to play with C-Webb, Latrell Sprewell (first-team All-NBA in ’94), Chris Mullin (a little past his prime, but a quality starter), Rony Seikaly, Avery Johnson and Chris Gatling … a pretty nice top seven, right?

Unfortunately, Webber entered the league right when younger players had been stupidly given an inordinate amount of power from the collective bargaining agreement, before everyone wised up and realized we needed a rookie salary scale for everyone’s sanity. Of all the potentially great careers that were squandered or affected in the ’90s because young players were given too much money and power too soon — Kenny Anderson, Coleman, Vinnie Baker, Larry Johnson, Glenn Robinson, Juwan Howard, Rasheed Wallace, Jason Kidd, Marcus Camby, Antoine Walker, Stephon Marbury, Tim Thomas, etc. — Webber remains the biggest casualty. Armed with that opt-out clause, he decided he wanted no part of Nellie’s abrasive style, even though, in retrospect, there has never been a better big man for Nellie Ball than Chris Webber. So instead of leading a perennial contender in the West and playing an offensive style that enhanced his talents, Webber found himself carrying a way-too-young Bullets team, developed bad habits and a lousy attitude, injured his knee, missed 116 games in four years and eventually convinced the Bullets to send him to Sacramento for Mitch Richmond and Otis Thorpe. By the time he finally found another free-wheeling offensive team with an imaginative coach, he was 26 years old. What a shame.

The rest of Webber’s career comes down to bad timing. Had he entered the league five years earlier or seven years later, he would have been tied to a conventional rookie contract and forced to make the best of it with Golden State (where he belonged all along). Later in his career, his three best Sacramento teams had the misfortune of peaking during the apex of the Shaq, Duncan and Garnett eras, suffering crushing Game 7 defeats in ’02, ’03 and ’04, and if there’s a complaint against Webber, it’s this: Not only did he suck in the clutch, he wanted no part of the rock in big moments.

Here’s what I wrote about Webber after Sacramento’s meltdown against the ’02 Lakers, in which every King except for Mike Bibby looked more terrified than the camp counselors at Crystal Lake: “Webber officially grabbed the torch from Karl Malone, Patrick Ewing, Ralph Sampson and Elvin Hayes as ‘The High-Priced Superstar Who’s Great to Have on Your Team Unless There’s Three Minutes Left in a Big Game.’ None of this was really a surprise, but watching C-Webb figure out ways to eradicate himself from crunch-time possessions was the most intriguing subplot of the playoffs. Didn’t it crack you up when Webber would receive a high-post pass, spin 180 degrees so his back could face the basket — Don’t worry, I’m not shooting, have no fear! — then desperately look to shuffle the basketball to the nearest available King? Has anyone even played Hot Potato to that degree? Even back in college, Webber was pulling this stuff; Jalen Rose probably took 90 percent of the big shots during the Fab Five era. It’s almost unprecedented.”

So how will Webber be remembered? Ever since Calvin Schiraldi and Bob Stanley self-destructed in Game 6 of the ’86 World Series, I’ve been a big believer that microcosms mean more than you think in sports. Yeah, the Red Sox might have been one more out and 14 different pitches away from winning the title — hold on, I’m gonna slam my head against the desk for old time’s sake (owwwwwwwww!) — but the bottom line was Boston’s bullpen stunk for that entire season and gave fans a collective heart attack in every big moment. Losing the title because our bullpen collapsed wasn’t exactly a huge surprise to anyone who loved that team. And when you look at what happened to the 2001-02 Kings — a superior team playing against a worn-out, increasingly dysfunctional Lakers group — that series came down to three games: Game 4 (when Robert Horry made a game-winning 3-pointer because nobody on the Kings grabbed the initial two rebounds); Game 6 (the worst and most unfairly officiated game of this decade); and Game 7 (when the Kings had multiple chances to put the game away in crunch time and couldn’t get it done).

Webber couldn’t have done anything about Game 6, but he didn’t exactly exert himself as those two rebounds were up for grabs before Horry’s famous shot (watch the tape), and he could have taken over the clinching game when it mattered most (instead of deferring to Bibby and playing hot potato). Presented with a chance to define his career once and for all, he couldn’t get it done. It just wasn’t in him. Did he lose his confidence in big games after the infamous “Time Out” game in college? Did he waste too many seasons playing for bad teams and never developed the necessary chops for a big game? Did he lack that killer instinct in the first place? We’ll never know.

But here’s what we do know: Chris Webber never took over a big game when it truly mattered, even if he had the talent to do so. That’s his legacy. Well, that and the “What ifs?”

If Webber’s career was a video game, I’d love to press the reset button, start it over with Orlando never making that risky trade and see what happened. But that’s the thing about real life: You don’t have a reset button, and if you make a couple of poor decisions along the way, those decisions can end up shaping the player or person you become. We will remember Webber as one of the best 75 NBA players ever, but we’ll also remember the potential for so much more. And that’s why something seemed right about watching him on TNT on Thursday night and thinking, “Man, C-Webb could be really good at this.”