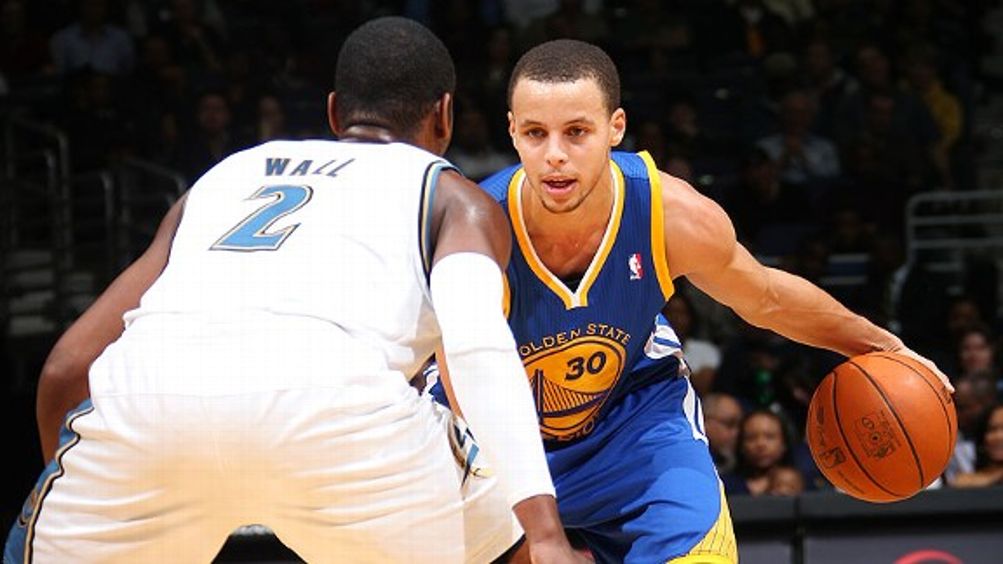 Stephen Curry steered his black SUV into a parking spot on the campus of Davidson College, the small liberal arts institution outside of Charlotte, N.C. He stepped out carefully to make sure his white shoes remained that way. It had rained, and the sun will make only a few scarce appearances throughout the day. Curry was bleary-eyed and caught in a mistake that most college students avoid at all costs: He had enrolled in a morning class.

Some NBA players played overseas during the lockout and kept up their basketball acumen. Some made music videos, and others disappeared from the public spotlight. About 45 players, including Curry, resumed college work they brushed aside to become professionally eligible. The trek is not really new. A healthy number of players return to school each summer. But one of the scant benefits of the extended offseason and lockout is that it allowed some players to make real dents in those long-dismissed credits.

Curry is on his way to a long, successful NBA career. He is the kind of baby-faced, good-natured player around which a team can genuinely market itself. A sociology degree is not necessary to make all of that happen. But the gravitational pull between Curry and Davidson is substantial and homey. It is more pronounced in an era of one-and-done players freshly removed from the generation of prep-to-pros. Curry helped put the school on the map, as far as basketball aficionados are concerned, with the school’s 2008 run. “Heck yeah, I have,” Curry said when asked if he thinks often about walking. “I went to my class’s graduation last year. My roommate and some of the other guys I went to school with walked, and I celebrated with them. They have an annual graduation for all the members of the team. I want that.”

The NBA, for Curry, embodied a fanciful dream. The degree represented a tangible goal, until the priorities and reality oddly flip-flopped a few years ago. Curry is the son of the sharpshooter Dell Curry. He developed late and could not even convince his father’s school, Virginia Tech, to offer a scholarship. Instead, he went to Davidson, where they do laundry for students, tests are unsupervised, and students sign an honor code. The school has produced 23 Rhodes Scholars, but just five NBA players.

When Curry departed for the NBA and the Golden State Warriors after his junior year, he told his parents and coach Bob McKillop that he would return to finish his degree. Or they told him. Sometimes, Curry thinks that McKillop’s cursory looks are a sign for him to hurry up, lest he mess with McKillop’s pristine graduation rate. “He always gives me this look,” Curry said. “I can’t tell if he’s thinking that in his head, but that’s what I think.”

On his first day back at Davidson this semester, a professor asked if “Wardell Curry” was present. “Yeah,” Curry said meekly to the announcement of his seldom-used first name, “Most people just call me Stephen.” And there was the time a student discreetly tried to take his picture in class and the flash blinded Curry. “Were my eyes open?” Curry asked afterward. “Yeah, thanks,” the student sheepishly replied.

Curry walked into the student union after exiting his car. He stopped at a computer to check whether a professor had e-mailed back a response to a question. The college activated Curry’s e-mail when he reenrolled. He started receiving about four or five e-mails a week soon after. Some students inquired about his availability for pickup games, and others wanted autographs. “I answer the ones that make sense to,” he said.

He left the building, unfurled his umbrella again, and walked into Chambers Building. It is the academic hub of the campus and holds most of the classes. The school’s enrollment is short of 2,000 people, and, even if you are not all that social, you can learn the names of most people if you stick around for a few years. Imagine Curry here in 2008. He handled the explosion of popularity well. Nearly one in four students plays a sport here, after all. Still, it occasionally unnerved him. Sometimes, he ducked into the basketball offices and hung out there for most of the day. His roommates had to sneak him into his apartment in other moments. Now Curry knows only a handful of students who were freshmen when he left, including the three seniors on this year’s team.

He enrolled in three classes this semester: a class on the history of education, a medical sociology class, and today’s qualitative research class. The research class is a precursor for Curry’s thesis. He is planning to write on the relationship between basketball players and tattoos. He has already polled about five players and drawn a surprising correlation. Nearly all the players1 said they wouldn’t have as many tattoos if they weren’t in the NBA spotlight, and they certainly wouldn’t be as visible, because they believed it would damage their prospects at other employment.

Curry has only one discreet tattoo on the inside of his left wrist. It reads “T.C.C.” and stands for trust, commitment, and care. Curry received the tattoo along with four teammates, and it served as their motto. The idea for the thesis arrived while Curry drove to class and tuned into a sports radio show. The show’s topic concerned Panthers owner Jerry Richardson apparently asking Cam Newton to refrain from any tattoos or piercings. Curry thought about the many NBA players who would have shattered that rule.

Curry talked about his findings in class and about how the paper should be framed. The class lasted a little over an hour, and Curry sat in a circle of only a dozen students. The size is comparable to the rest of Davidson’s courses. The faculty-to-student ratio is about 10-to-1. “I’ve got some catching up to do,” Curry said afterward. “These lockout negotiations have really put a dent in my classes.”

He met up with one of the remaining familiar faces after class. Lauren Biggers worked as an assistant director of sports information at the school, and helped handled the onslaught of media requests. She is now in Davidson’s alumni department.

“We need to talk about your outfit,” Biggers said.

Davidson plays Duke the next day. It is the classic David-against-Goliath matchup, except David is Curry and he no longer plays for the school. Curry debated which team to root for. (His younger brother, Seth, is a junior at Duke.) His wardrobe is taken care of, though. He will wear a red Davidson jersey in the front with Duke colors in the back.

Biggers and Curry grabbed food, which is when Curry met his first adulation of the day. Rosemary Turner, a cafeteria worker, has waited for Curry to show since she last saw him and snapped a few pictures of him. They were now developed, ready to be signed. Curry smiled and autographed a large stack, one after another.

The talk shifted to when Curry will finally graduate.

“It depends on how you would define if everything goes right,” Curry said. “Ideally, I really don’t know because it could be — the earliest it could be is August. The latest is a dot, dot, dot.”

In the afternoon, Curry walked to the Baker Sports Complex. Belk Arena’s court is sunken and flanked by two more basketball courts at street level. The men’s basketball team often switches with the women’s basketball team or the volleyball team for time on the main court. The arena holds more than 5,000 people, but only when the stands from each side are compressed and loom over the action.

Curry mostly worked out during the lockout with fellow NBA Charlotteans such as Antawn Jamison and Anthony Morrow at a facility closer to Charlotte. He decided to practice with Davidson today, an act permissible by the NCAA because he is enrolled in classes. Curry parked his car in the back lot. McKillop forbids players from using the back lot, but an NBA player is afforded some privileges, right?

Not here. Curry will later return to his car having been toilet papered by Steve Rossiter, a former teammate and roommate, also in town. Brendan McKillop, one of Bob McKillop’s two sons who played under him here, also watched the practice.

Curry assumed his role on the scout team in practice. Instead of Monta Ellis and David Lee, his teammates were a couple of backups, an assistant coach, and a student manager. In one of the greater ironies of the lockout, Curry played the role of Seth as Davidson prepped for Duke.

Curry, in white shorts and a white shirt that contrasted against Davidson’s black jerseys, remained a respectable distance as the coaches huddled the players. The team moved on to drills and McKillop’s voice boomed over the screeching shoes. “That’s what we need, five guys in the right place at the right time,” McKillop instructed on breaking the press. “You can take it direct, you can pull that way, you can push that way, but don’t invade his space.”

For a while, the NBA player on the court could not be spotted. But then the scout team switched to offense. Curry hit a couple of deep 3-pointers. “Get out,” assistant coach Jim Fox told the defense. “All the way out. That’s what he’ll do.”

With the defense stretched out on him, Curry sliced through two defenders and kissed the ball off the very top of the backboard before it flicked through the net. The practice ended, and the team packed for the bus ride to Duke. Curry stayed behind to catch up with Rossiter and Brendan McKillop, who both now live and work in New York. The familial atmosphere is a large juxtaposition to Curry’s entrance into the professional world. The Warriors drafted him even though he had never worked out for them. The incumbent star guard, Ellis, immediately announced that a backcourt that consisted of the two would not work.

The sides will reach a sudden agreement to end the lockout in a few days. The movement caught a lot of people off guard, Curry included. The school will allow him to finish his two final examinations, an essay, and the 20-page research paper. Curry will try to complete them during an abbreviated training camp. It is a better option than losing all of the progress he had made. “Once training camp starts, it’s going to be pretty demanding,” Curry said in a follow-up talk. “I’ve just got to grind it out.” His name will immediately be thrown into a number of trade scenarios. The most prominent talks center around Curry as the main carrot dangled to land Chris Paul. “I’ve been through this ever since I was drafted,” Curry said. “I was drafted, and the next night I was supposed to be in an Amar’e Stoudemire trade. We’ve had trade rumors around our organization since I’ve been here. None of that’s new to me. But it feels good to be relevant in basketball talks and not just about the lockout.”