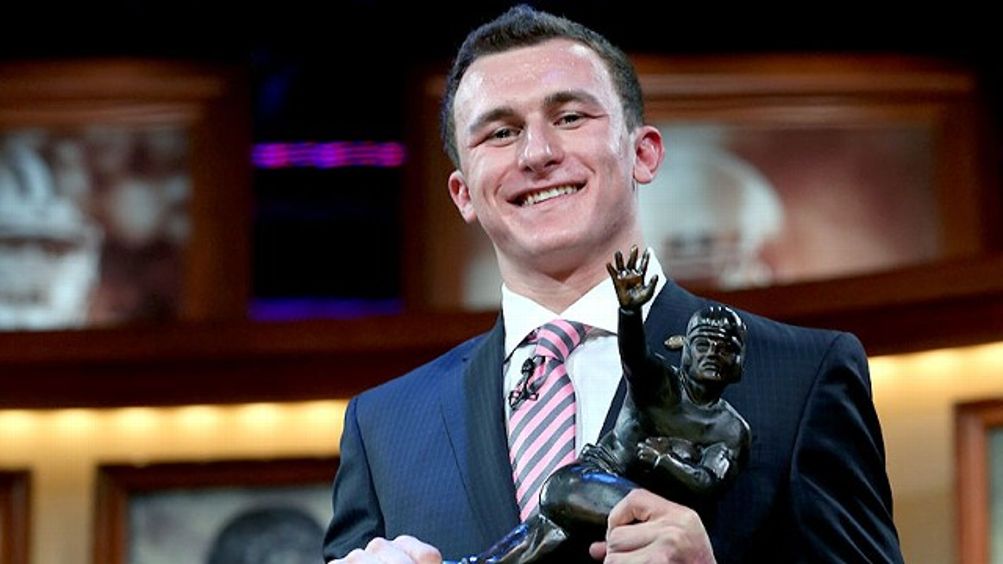 Last Friday afternoon, the Johnny Football Experience held its first big-city press event, in a Times Square hotel conference room that was far too modest to contain the frenzy. It was not exactly the Beatles at JFK, but I’m pretty sure every journalist within a 50-mile radius of Johnny Manziel’s hometown of Kerrville, Texas, was there. And while it turned out that Johnny Football was not actually a deaf mute and he did not actually mumble like Ennis Del Mar and he did not actually require a Spanish translator, it still felt like news that he was finally talking, after a season of silence mandated by Texas A&M’s policy intended to prevent freshmen (even redshirt freshmen like Manziel) from publicly uttering the intractably dumb things that college freshmen tend to say to each other.

“Living in a city like this would be hard for me — I’m a small-town Texas guy,” said Johnny Football, who, it turns out, has just enough Matt Saracen and just enough Joe Buck in him to satisfy both the New York tabloids and the Central Texas weeklies. “Everything’s so big. And I’m kinda scared of heights.”

It should be noted that Notre Dame linebacker Manti Te’o — the eventual runner-up for this year’s Heisman Trophy, which Manziel officially won on Saturday night — was also there,1 that he rode in from the airport with Johnny Football, and that they sat in the car and discussed video games and marveled at all the jaywalkers crossing 42nd Street against the lights. And it should be noted that Te’o appears to be a genuinely wonderful and resilient and inspiring human being who will no doubt impact the world in a myriad of positive ways. And it should also be noted that even Te’o tacitly understood he stood no real chance of winning the Heisman on Saturday night, barring some sort of curmudgeonly movement among the voters to deny a freshman from ever winning the award. “One of my teammates said something about how he’s voting for this guy Johnny Football for Heisman [in the fan voting],” Te’o said. “And that was my teammate.”

I can’t imagine there’s a more purposefully nebulous award in sports than the Heisman: Its only real proscription is that it be awarded to the most outstanding college football player in the country. It does not make distinctions between offense or defense, between “value” or lack thereof, between cold statistical efficiency and sentimental emotional attachment. Its parameters are in constant flux, and its winners are often molded by the contours of that season’s particular argument, or by the nature of a certain university’s politicking, or simply by a regional voting bloc’s eagerness to make some sort of statement about the nature of the sport. There are years when it is awarded, almost by default, to the best quarterback on the best team (Jason White, 2003; Gino Torretta, 1992), and there are years when it is awarded to a prolific, if unspectacular, running back (Rashaan Salaam, 1994; Ron Dayne, 1999), and there are years, in the modern highlight era, when it is simply bequeathed to the most exciting college player in the country (WINNER DECLARED INELIGIBLE, 2005; Robert Griffin III, 2011).

It turned out this was another one of those years: Johnny Football was the most purely exhilarating quarterback in the game, blessed with that epic nickname before he’d even played a down at A&M, inserted into a fast-paced modern offense that played up his strengths. He ad-libbed his way to New York. He was the keynote player in the season’s most thrilling game, and in the midst of it improvised a touchdown pass that was probably the season’s most exciting play. He is also now the third consecutive Heisman-winning quarterback to emerge from an up-tempo spread offense, and maybe that doesn’t mean anything at all except that up-tempo offenses tend to produce Heisman moments that linebackers never could.2

Or maybe it means that, at least this once, the Heisman is actually leading the argument. 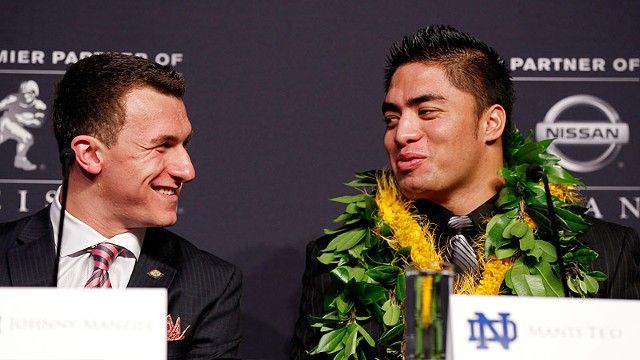 I‘ve advanced this line of thought several times this season, and I’m going to keep toying with it even if you happen to consider it blasphemous and antithetical to the nature of the sport. This is because — forgive me — I happen to enjoy watching exciting football games, and because I happen to think offenses like A&M’s are inherently fascinating to study. And because I also wonder — perhaps naively — if this is a path for football to evolve its way out of the head-on collision and concussion model that has rendered it increasingly unsustainable.

“People didn’t think we were gonna have much success in the SEC,” Manziel said. “They called it a gimmick offense. But we stress tempo, and we want to make people uncomfortable. I love our offense. I love everything about it.”

The argument against the Johnny Football model is that defense will always prevail, and in a way, I agree; the great challenge for schools like A&M and Oregon and West Virginia is to evolve on the other side of the ball — or are defenses stretched so thin by their offenses’ ability to score quickly that they will never be able to catch up? It is clear now that we are in the midst of an ongoing experiment that will play out over the course of the next several seasons. If Johnny Football does not get tripped up by his own stardom, if key cogs like handsome hipster-bro offensive coordinator Kliff Kingsbury do not depart to establish their own fiefdoms, there is reason to believe that Johnny Football, in his next two to three seasons, could become a key figure in revolutionizing the sport. “I just need some time to think about” how the offense might evolve this offseason, Kingsbury told me after Manziel walked off with the Heisman on Saturday night. “But it’s already evolving pretty nicely.”

There are miles to go before this experiment yields complete results, one way or the other. This year’s National Championship Game could conceivably end with both teams in the single digits, and the best college football conference in the country is still primarily defined by its bottomless yen for defense. So there is that systemic SEC hegemony for Johnny Football to navigate, and then there is the personal minefield he will be forced to deal with at the same time, as the most famous college freshman in America, as a folk hero in a state where football and folk heroes happen to form the lifeblood of daily existence.

After Manziel won the Heisman, they held a press conference in that Times Square hotel, and the hometown media openly applauded him. Somebody asked where he’d keep the trophy, and he said he’d like to keep it in his room, near his bed, but he lives in a dormitory, and will most likely do so for the foreseeable future. He just turned 20 years old, and his complexion is still clearing, and he has absolutely no idea what he wants to major in. He talked about how his heart was pitter-pattering so hard before the announcement that he thought it might be thumping right out of his chest like in the cartoons; he dedicated his win to a kid back home suffering from cancer. In the end, Johnny Football turned out to be pretty charming. And truthfully, I don’t know if this is the kid who will alter football as we know it, but I imagine it’s going to be a hell of a lot of fun to watch him try.