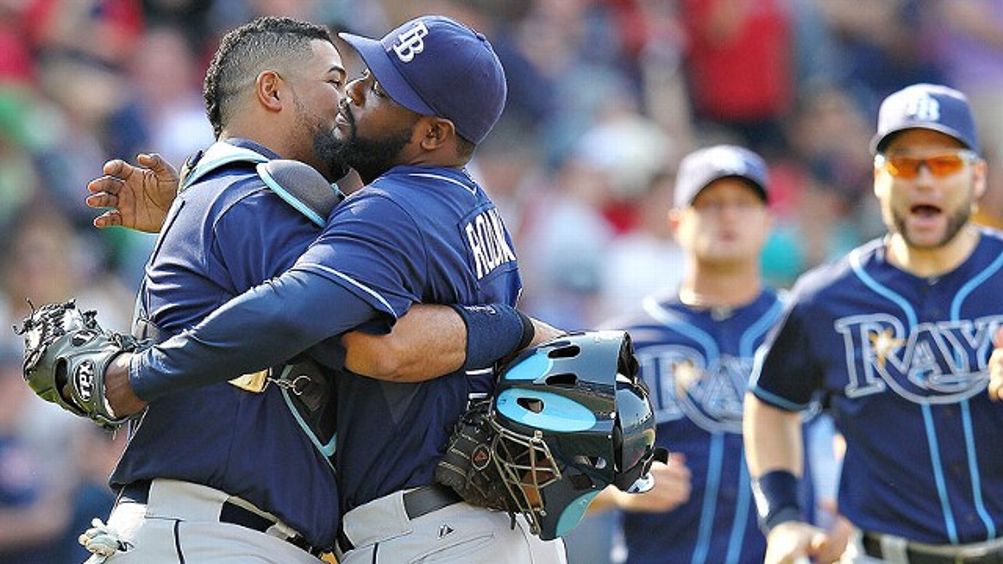 The visitors clubhouse at Fenway Park has seen many things in the 100 years the park has been open, many of them marginally related either to baseball or to the steady progress of evolution as seen through the various rodent populations — and yes, Billy Martin once worked in there, for several different teams — but I believe that this past Sunday was the first time it had ever seen a strobe light.

I am still unclear as to what was actually going on in there. The Tampa Bay Rays had just beaten the Boston Red Sox, 4-3, on a ninth-inning home run by shortstop Sean Rodriguez. Not 17 hours earlier, they’d been beaten, 3-2, on a ninth-inning home run by Boston catcher Jarrod Saltalamacchia. Now, they’d taken two out of three, and they’d slipped into a first-place tie with the Baltimore Orioles in the American League East, and every time the clubhouse door swung open it appeared very much like the middle reels of Saturday Night Fever were being filmed inside. In the passage outside, there was an elderly gentleman in a Red Sox jersey. He was of the classic Boston type, white-haired and red-faced, and looking very much like a state rep who’d ducked the indictment three days earlier. Tampa Bay DH Carlos Peña invited him in. As he slipped through the door, you could see the strobe flashing madly and making it look like the exercise bike was jumping around on its own. You began to wonder if this was some sort of odd baseball Hamelin, and whether we’d ever see the guy again, or if the Rays would just pack him off to Tampa with the bats and the liniment for the upcoming series with the White Sox.

A few minutes later, the old guy came out, smiling hilariously, and without his shirt. That followed a few seconds later, airborne. And Peña was seen ducking back into the clubhouse. The guy laughed, but wouldn’t talk about what had been going on in the clubhouse.

“That’s those guys,” Tampa manager Joe Maddon explained later. “That’s a secret. I can’t tell you about it.”

To paraphrase Rick Pitino, fun is a choice. More than a few baseball teams behave as though, sometime in February, a federal court in either Florida or Arizona has sentenced them to play 162 baseball games and to home confinement in America’s luxury hotels. Since the Soviet Union fell, there are no more miserably unhappy places on earth than unhappy baseball clubhouses. And, just last fall, for example, the Boston Red Sox gave a very good public imitation of a gulag, albeit with fried chicken and beer. Nobody was happy. Meanwhile, down in Tampa, the Rays were doing things like themed road trips, one of which required that everyone in the traveling party wear a college letter sweater. Others included an all-black trip, in honor of the memory of Johnny Cash, and a pajama-party trip, which must have been just too adorable for words. So you had one team with a big payroll and all the joie de vivre of folks gathered for an ensemble proctological procedure, and a giddy caravan of goofballs without an apparent care in the world. And when the latter overtook the former, on the last at-bat of the last night of the season, it was like watching sunlight break through the clouds.

As it happens, the trip that brought Tampa to Boston this past weekend also had a theme. It was The Nerd Trip, dedicated to Fox baseball analyst Ken Rosenthal and his omnipresent bow tie. Photos popped up on the Internet showing various Rays in varying degrees of dweebosity. Maddon went long himself, sporting a brown shirt, a brown-checked sportcoat, and a bilious yellow bow tie. He looked like the man who corrupted the man who corrupted Hadleyburg. And, typically, he was the first one to laugh at the whole business.

“Well, it’s a game,” he said. “Some people forget that, but I want our guys to understand that. One of our tenets is that we win hard for 30 minutes and we lose hard for 30 minutes, and then we move along to the next day. You’re not going to walk in here after a good win or a tough loss and feel any different.

“It starts from me and from the coaching staff. I tell myself to be consistent, to be the same guy walking in that door, good or bad.”

It has filtered down and throughout the organization, which has managed to build itself up from the days in which you could drive up to the stadium on game nights and park within 10 yards of the ballpark without paying. (I did that once, and waited in my car for 10 minutes for somebody to come up and ask me for money.) “It can’t get no better than this,” explains B.J. Upton, the volatile outfielder who’s as close to a lifer as the Rays have. “We have fun, you know, man? And then we make it look as good as we can on the field.

“You know, a lot of guys in here came up as a unit through the minor leagues, so we all know what playing here is all about. We go out and have fun and it carries over into our play. Around the league, you know, other guys’ll say, ‘You guys look like you’re having fun over there.’ You know what? We have fun first, then comes winning.”

“The funniest thing is when we get a new player in here,” explains Peña, the MC of Joe Haddon’s Dance Party or whatever the hell it was that was happening after the last game of the series. “They come in, and their eyes get wide, and it’s like, ‘What is this?’ It’s probably such an extreme compared to where he’s coming from. The next thing you know, he’s joining right in.”

There have been very few teams that have managed to balance the grown-up business of being professional baseball players with the clownish joy of playing a children’s game as well as the Rays have. That became quite plain over the last two nights of the series. On Saturday, they wasted a great performance by David Price when closer Fernando Rodney gave up the walk-off gopher to Saltalamacchia. Rodney’s first blown save of the season. Sure enough, on Sunday, when Tampa was clinging to a one-run lead, Rodney came into the game in the ninth inning and the first man he faced was the Red Sox catcher. He got him this time, on a ground ball to shortstop.

“I thought that was great for Fernando,” Maddon said. “I thought he had to be very tough mentally there, not to be impacted by a moment like he’d had on Saturday.”

In a way, they’re a throwback to the very oldest days when road trips went from Philadelphia to St. Louis and back again by train, and Babe Ruth caroused the aisles, taking bites out of straw hats, only to sober up just enough the next day and take some poor Browns pitcher halfway to Jefferson City. On Friday night, for example, the Rays took off the bow ties and the horse-blanket suits and whacked the tar out of Boston left-hander Jon Lester, 7-4, in a game that ended with both benches clearing.

There is a unique history of bad blood between these franchises, dating all the way back to when Tampa was still the Devil Rays and the team was truly awful. Pedro Martinez, then the Boston ace, went upside some heads, and that’s when it all began. The latest chapter came in the ninth inning of Friday night’s game, when Red Sox reliever Francisco Franklin Morales threw over the head of Tampa’s Luke Scott, and then threw behind him, and then finally hit him in the hip. (Boston’s Dustin Pedroia had been drilled earlier.) An enthusiastic base-clearing discussion ensued in which coaches and fans eventually contributed to the festivities until order was finally restored.

(Scott himself is not beloved in the Fens, having delivered himself of the opinion that Red Sox fans are basically idiots and that the World’s Most Beloved Ballpark is pretty much a dump, bold words from a guy who plays in major league baseball’s equivalent of Castle Dracula. Scott, of course, also became briefly famous as baseball’s most conspicuous Birther, so it’s likely the president would throw at him, too.)

After the game, Maddon opined that he thought the whole business had come down on orders from the upper echelons of the Red Sox dugout. “Somebody,” he said, “is flexing their muscles on the other side who really should put them in his pocket. It was absurd, ridiculous, and all those other words you can name. It was a really weak and cowardly effort on their part.” Outside his office, the players were watching Boston manager Bobby Valentine’s press conference on one of the TVs, and the clubhouse erupted in laughter. This seemed like nothing less than the blessed normal returning. Two days later, they were in first place.