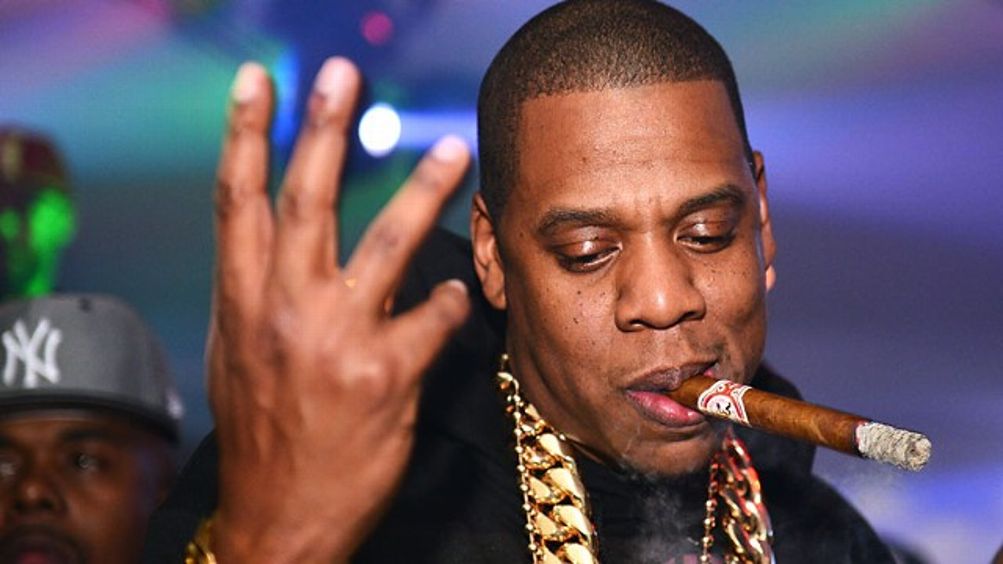 From the moment it was introduced via a handsomely filmed three-minute commercial that first aired during Game 5 of the NBA Finals, Magna Carta … Holy Grail was one of the most hyped albums of 2013. Which actually means it was over-hyped, as there’s no such thing as just the right amount of hype. Hype is commonly understood to be sound and fury signifying nothing; in the case of MCHG, the noise was supplied by Jay-Z’s promotional and distribution partnership with a smartphone company. The wave of ads that followed packaged MCHG as an uncomfortable dichotomy of touchy-feely artistic pretension and cold-blooded corporate cynicism — a brazen display of greed disguised as a noble act by a visionary game-changer. But no matter the album’s gaudy and annoyingly glitchy big-business baggage, Magna Carta … Holy Grail truly is unique, even unprecedented.

Consider that MCHG was made by a 43-year-old rapper who is 17 years deep into a highly celebrated discography, and that it will surely go on to become his 13th no. 1 album. Or that it arrives as Jay-Z prepares to launch what will likely rank among the year’s most successful tours with one of the world’s top pop stars, Justin Timberlake. In the history of hip-hop, where nearly every career arc sinks toward irrelevance after about a decade or so (if you’re lucky), Magna Carta … Holy Grail finds Jay-Z still on top of the rap game as he approaches the start of his third decade. MCHG is not The Blueprint, but it is a blueprint for long-term survival in a notoriously fickle genre that Jay-Z is creating as he goes along.

So, in a sense, Magna Carta … Holy Grail really is writing new rules — sorry, #newrules — for how a rapper can maintain a prominent place in pop culture at the dawn of his mellowed-out middle-aged period. Notice how Jay-Z has stopped comparing himself to other rappers; MCHG references Johnny Cash, Kurt Cobain, Aerosmith’s “Dream On,” and R.E.M.’s “Losing My Religion,” all of which had their day before most of his hip-hop contemporaries (and audience) were even born.1 As Jay-Z enters uncharted waters for hip-hop, these classic-rock totems are his only guides forward. I’d like to suggest another: the Rolling Stones’ 1981 album, Tattoo You. Like MCHG, Tattoo You was released 17 years into a once-trailblazing artist’s career. Tattoo You was also accompanied by a high-profile tour of arenas and stadiums, sponsored by the bargain-basement cologne company Jovan — a controversial move that some in the media argued was damaging to the band’s credibility.2

Mick Jagger had just turned 38 when Tattoo You came out — practically a spring chicken compared with Jay-Z — and the idea of rock bands continuing to play concerts into their 40s, 50s, 60s (!), or even 70s (?!) was inconceivable at the time. But Tattoo You and the subsequent tour was the door through which the Stones (and then many others) stepped into the second (and third and possibly fourth) acts of their career. It was where the Rolling Stones became “the Rolling Stones,” a larger-than-life rock-and-roll theme park that always packs ’em in in spite of never really justifying the overpriced ticket and torturously long bathroom lines. Jay-Z similarly presents himself on MCHG as an artist whose job is to be richer and more famous than anybody else in hip-hop. Jay-Z has never been the most relatable rapper, but now he’s pushing an idea of himself that’s part caricature and part protective shell. His hope is that nobody notices the well-moneyed family man with nothing left to say behind the rap-superstar curtain.

Tattoo You ends with the last capital-G great Stones song, “Waiting on a Friend,” where Jagger memorably sings that “making love and breaking hearts, it is a game for youth.” The tension in “Waiting on a Friend” is that Jagger acknowledges the limits of his dick-swinging persona, particularly for a man his age, while making no attempt to back away from it.3 It’s the point where Jagger as a recognizable flesh-and-blood person in Rolling Stones songs ends, and Jagger as a profitable persona permanently assumes control. Jay-Z’s “Waiting on a Friend” moment4 comes during the Beyoncé duet “Part II (On the Run),” where he raps “she fell in love with the bad guy, bad guy / what you doing with them rap guys, them rap guys / they ain’t see potential in me girl, but you see it.” Jay makes it clear on MCHG that he’s not a bad guy — unless you’re overly sensitive about an art collector allowing his infant daughter to touch his Basquiat collection, as Jay does in “Picasso Baby” — though he’s not above playing the role for old times’ sake. (Like on “La Familia,” which promises to go Liam Neeson on anyone who might want to kidnap Beyoncé, in case that’s something anyone is considering.)

“The album is about, like, this duality of how do you navigate through this whole thing, through success, through failures, through all this and remain yourself,” Jay says to a barefoot Rick Rubin in the first MCHG commercial. His solution to this quandary of spiritual geopositioning is putting as much distance as possible between the real Jay-Z and what he’s propagating, and what he’s propagating and his audience. This distance isn’t bad, necessarily — it’s just that, like any amusement ride, MCHG only seems empty and banal when examined up close.

Questlove rightly called Watch the Throne “the definitive black stadium album”; Magna Carta … Holy Grail is less definitive, but it’s equally suited for the cavernous spaces where Jay-Z now lives and works. The focal point of MCHG‘s weirdly sentimental ad campaign has been the album’s personal and political content, as in the commercials spotlighting “Oceans,” in which Jay contrasts yachts with slave ships, and “Jay-Z Blue,” in which he reappropriates Faye Dunaway’s chewiest sound bites from the 1981 camp classic Mommie Dearest for an ode about fatherly devotion.5 Fans of MCHG will likely point to these tracks as signs of Jay-Z’s “growth,” but I suspect most listeners are already skipping over them to get to the more superficial and enjoyable bangers: the fashion-obsessed “Tom Ford,” the skronking (and unmistakably “Thrift Shop”–esque) “Somewhereinamerica,” and the Latin-tinged “BBC.” MCHG, at its best, plays it broad for the cheap seats — the solid and occasionally spectacular production (much of it courtesy of Timbaland with able assistance from Pharrell Williams, Swizz Beatz, The-Dream, and “Niggas in Paris” co-producer Hit-Boy) takes precedence over Jay-Z’s solid and occasionally better-than-solid lyrics on the “deep” and “thoughtful” slower cuts.

Magna Carta … Holy Grail has already been compared frequently — probably too frequently — with Kanye West’s Yeezus. For critics, this has been intended to diminish Jay-Z; for many rap fans, it’s a slam on Kanye. This is to say that both men have once again been highly successful in achieving what they’ve set out to do; Jay-Z is consciously courting the very people Kanye intended to alienate, just as Kanye (probably just as consciously) wanted to show exactly how he’s not like Jay. (At least not yet.) So while Team Yeezus likely interpreted Rubin’s pre-release comments about MCHG being “a more traditional hip-hop” counterpoint to the “very alternative and progressive” Yeezus as an endorsement of the latter over the former, it’s equally likely that Team MCHG saw it as the opposite. Jay-Z has made an album for people who like hip-hop but are no longer engaged with its youthful vanguard — which is precisely the same group of people most interested in spending hundreds of dollars to see Jay play live versions of hits from 10, 15, nearly 20 years ago.

Considering the genre had its first Top 40 single with “Rapper’s Delight” way back in 1979, it’s amazing that hip-hop is still so closely aligned with youth culture. This speaks both to the music’s vitality and willingness to reinvent itself, as well as to the cultural inertia that has kept a new movement from taking its place. Those most heavily invested in rap’s eternal adolescence will recoil against the encroaching fogeyism that Magna Carta … Holy Grail represents. Those people have a point: Magna Carta … Holy Grail is delivered with exquisite dispassion and elegant apathy. It’s not good so much as fine. But Jay-Z doesn’t have to win me or anybody else over. Because one day they’ll need a name rapper in his 40s (or 50s or 60s or 70s) to headline a Super Bowl halftime show. Who else are they going to call?