Could LeBron James Really Play in the NFL? 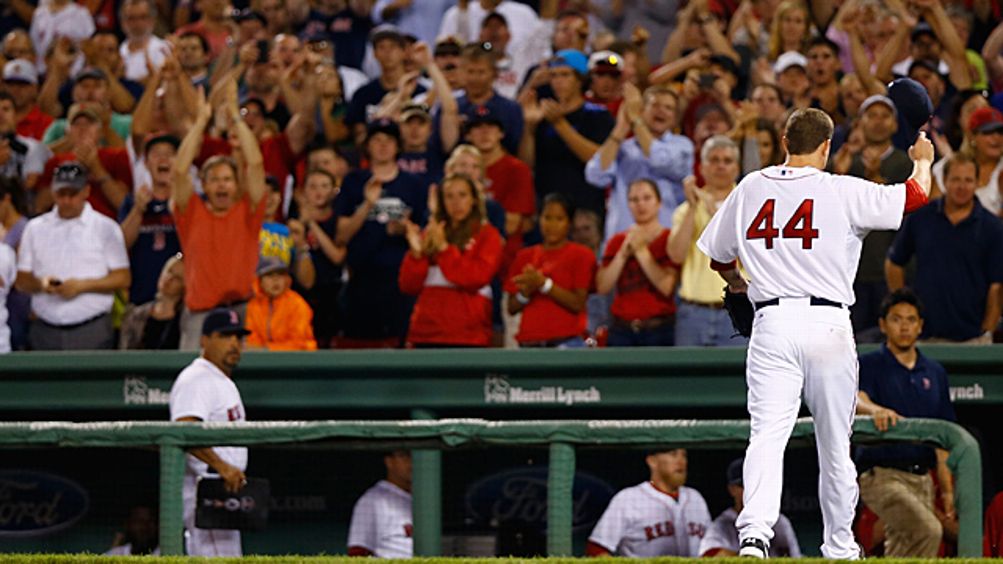 “You know, I told those guys, I do have a couple of little boys, so I try to keep it as clean as I can keep it out there,” Peavy said, after standing the Arizona Diamondbacks on their ears Saturday night in his first start with Boston. “You don’t want to put words in my mouth, but I do have little boys, and I know the world’s watching out there, so I’m pretty sure I’m guilty.

“I don’t even realize it’s happening while it’s happening. I’m just in the game, pitch to pitch, and I’m saying stuff to myself to remind me of something mechanical, or who knows?”

Peavy was Boston’s prime acquisition at the trade deadline. The Red Sox, who are thick with left-side infielders in their system, sent shortstop Jose Iglesias and his platinum hands to Detroit in a three-way deal that brought Peavy to Boston. (Iglesias, who has been hitting above his weight class all season, enlivened his Detroit debut weekend with a home run.) This strengthened the Boston rotation immensely, especially against the possibility that Buchholz, who has been plagued with some sort of mysterious neck-bone-is-connected-to-the-shoulder-bone-is-connected-to-the-psyche problem, will not return until at least Labor Day, which would be ironic, if nothing else. No less an authority than Dr. James Andrews has said that whatever’s going on with Buchholz doesn’t appear to be entirely structural, but nonetheless it has kept the team’s putative ace — and his 9-0 record, and his 1.71 ERA — off the mound since June 8. Jon Lester has struggled this season, and a lot of the stopper duty has fallen on the unheralded Felix Doubront, about whom more anon. So Peavy’s arrival at Fenway was even more of an event than it might have been otherwise.

He gave them seven All-Star innings Saturday, dueling with Arizona’s Patrick Corbin in a battle of low fastballs and down-diving sliders that may have set an unofficial major league record for the number of times the two catchers appealed to the first- and third-base umpires over whether a batter swung all the way through. The Red Sox managed to scuffle across a couple of runs in the seventh, Peavy gave up a single to the only batter he faced in the eighth, and then he was lifted to a huge and warm ovation that, unfortunately, did not exhaust the crowd sufficiently to prevent it from singing along to “Sweet Caroline” a few minutes later, the most noxious Fenway tradition since the team largely abandoned white supremacy in the 1960s.

(Additional Fenway musical note: Shane Victorino’s at-bat music was Bob Marley’s “Three Little Birds.” “Every little thing / gonna be all right … ” The crowd has begun to sing along with it and, when Victorino’s at-bat late in Saturday’s game was delayed by a pitching change, the crowd got to sing a full verse of it. The blessings of Jah surely will be upon on the ballpark if somehow it exchanges Neil Diamond for the Wailers.)

“I can’t tell you how excited I was tonight,” Peavy said. “I told a few guys that I had some nerves, and obviously having around 300 starts, I felt like it was one of my first. One of the things you learn from experience is to know that you can’t go out there and win the ballgame in those first few at-bats. You just stick with the game plan.

It was a curious weekend to be studying pitching. All of baseball was laboring under the delusional denouement of the latest chapter of its War on (Some Classes of People Who Use Some) Drugs — copyright Lawyers, Guns & Money — and a lot of the talk in and around the ballpark was about which stars would get whacked, and how hard, and especially when, since Major League Baseball has played out this latest spasm of moralistic opportunism as though it were The Newsroom, speaking of played-out spasms of moralistic opportunism. Most of the outrage, and all of the convenient leaks — MLB on this matter being one of the greatest sieves since Kenneth Starr folded up his shop — have concerned the people who hit the baseball, not the people who throw it. (Pitchers have been named in a reported list of those who have been suspended, but so far they are prospects or lightly regarded free agents.) Certainly, the preposterous waste of time and money that was the legal pursuit of Roger Clemens is an obvious exception to this rule, but, by and large, as the history of the Steroid Era is written, pitchers have been cast as the victims in the saga. (Clemens was in Fenway this weekend for the anniversary of the Red Sox’s improbable 1988 turnaround — a.k.a. “Morgan Magic,” named for the career time-server who took over the team in midseason and got spectacularly lucky — and even participated in the broadcast of one of the games. Being a pariah ain’t what it used to be.) That it is painfully illogical to assume that, throughout this dark time in our history, when the plague of drugs fell upon the fresh-faced boys in the field, and evil portents hung heavy over our sporting cathedrals wah-dee-doo-dah, hitters were using and pitchers weren’t is painfully beside the point. Drug frenzies do not know logic. So let us sit upon the luggage cart and tell sad stories of the death of pitching, which happened to be quite alive and well here over the weekend, as we waited for Bud Selig to butch himself up again.

Pitchers,” said Juan Nieves, “are the most aggressive human beings when it comes to any sport. Every pitch, it’s like throwing a punch, like a boxer who throws a full right every time. Imagine having a boxer throwing all full right hands, as hard as they can, but under control, without falling on their face on the mat.”

The arrival of Nieves as the Red Sox pitching coach in November has been one of the unalloyed successes the team has enjoyed since sweeping out the sad detritus of the fried-chicken-and-beer-fueled demise of Terry Francona, which led to what will undoubtedly be referred to by baseball historians of the future as the Unfortunate Bobby Valentine Experiment. (It should be noted that the fried-chicken-and-beer shenanigans were wholly the province of the team’s pitching staff, and that some of the ringleaders are still with the club.) When new manager John Farrell, himself a former pitching coach with the Red Sox, brought in Nieves, he brought in one of the game’s most respected, and downright affable, clubhouse presences.

(Farrell’s had his own unconventional problems with pitchers. In 2011, while managing the Blue Jays, he attempted to intervene when one of his pitchers went after an umpire, and got his jaw dislocated for his trouble. Nieves may be more right than he knows with that boxing metaphor.)

Nieves began his baseball career as a genuine phenom. He came up with the Brewers in 1986, started 10-4 before leveling off, and, a year later, became the second-youngest pitcher ever to throw a no-hitter in the major leagues. His pitching career lasted only another year and, since then, Nieves has been working his way up. He spent five years as the bullpen coach with the White Sox, during which time he studied the strange breed of which he once had been a member.

“Pitchers are full-time attackers. They are full-time offensive players,” he said. “They are offensive strike machines. I really think the guy who is the most violent out there is the pitcher, because we’re throwing every pitch as aggressive, and with as much conviction, as possible.

“Hitters only do it, what, 10 times a game? Pitchers do it 120 time a day. It’s a very violent movement — [both] if you see guys who are really smooth or the guys who are really aggressive. Within control, it’s a violent motion. It’s not a common thing you do. Swinging is a more natural thing than throwing is.”

Nieves has paid particular attention to Doubront, a burly Venezuelan who now has allowed three earned runs or fewer in 19 of his 20 starts this season, and who has picked up the slack for the erratic Lester and the largely absent Buchholz. On Sunday, he banged around the strike zone a little bit, but he got bailed out by a couple of double plays and by his ability to throw his fastball past the Diamondbacks hitters when he needed to do so, especially in the early innings. He got through a solid seven innings without giving up a run, and put up five strikeouts and no walks.

“First-pitch strikes were a little elusive, but he was able to go to a breaking ball or changeup to get the timing back in his delivery and still maintain a lot of efficiency,” Farrell said. “It was kind of a workmanlike, solid seven shutout innings for him.”

All of which will be buried deep because, as expected, Bud Selig has begun to flex for us today. It was an odd weekend to be studying pitching at the ballpark, given all that has been happening elsewhere. There is no logic here, nor should we expect to find any. So let’s talk about pitching because, otherwise, like Jake Peavy, we’ll probably end up talking to ourselves, and we won’t very much like what we have to say.