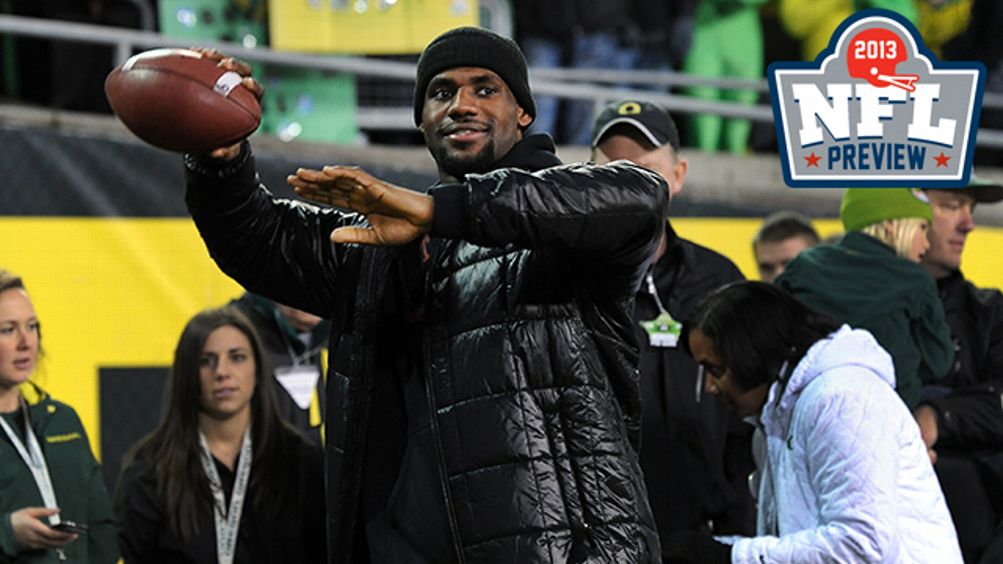 LeBron James is a freak athlete and a superstar capable of doing close to anything he wants on a basketball court. LeBron James was a very good wide receiver when he played high school football. Therefore, LeBron James would be an excellent pro football player if he ever decided to follow in Michael Jordan’s footsteps and switch sports midcareer. Right? That’s the story that has gone around for years, with many sharing the opinion expressed by Dez Bryant on Friday: James would be a “beast” of a player, most likely at tight end. Bryant even said he thinks it would take James just “two weeks” to get down the technique of being a receiver. Can it really be so simple?

I’m skeptical. I don’t doubt James’s athleticism, work ethic, or toughness, but there’s more to switching sports than it might seem. In fact, some aspects of James that translate well to basketball might actually be a net negative in football. And in the long run, I suspect that if he did move to football, he might be better off at a different position.

Perhaps the biggest thing that would hold James back from being an excellent football player for a long time would be the same thing that helps him excel as a mismatch in basketball: his height. James is listed at 6-foot-8 and 250 pounds, but there have been suggestions that he has grown since arriving in the league, to around 6-foot-9 and the 255- to 275-pound range. It doesn’t really matter. In either case, while LeBron’s height would make him a terror on jump balls1 in the end zone (as Bryant suggested), his height would also leave him susceptible to something he doesn’t have to fend off in basketball:2 an endless stream of defenders diving at his knees and ankles. Health is a skill, and as a player, protecting yourself from injuries is part of the job. With James’s size and strength, safeties would likely resort to diving at his ankles and knees to bring him down, increasing his risk of injury. It might not be physically possible for a player that size to protect himself from low hits downfield.

That is to say that there is virtually no precedent for a receiver as big as LeBron suiting up and playing effectively in the NFL. According to the height records from Pro-Football-Reference.com, there have been only six receivers since the merger who were 6-foot-8 or taller to have any sort of NFL career, and four of them (Brad Cottam, Greg Estandia, Joey Haynos, Zach Hilton, all 6-foot-8) lasted a maximum of three seasons. Morris Stroud, who played for the Chiefs, at 6-foot-10 is the tallest receiver in NFL history, and is responsible for the rule that prevents players from standing in front of the uprights to block field goals. He had 977 yards and seven touchdowns from 1969 to 1974, so while the league hadn’t yet evolved into the passing competition it is today, Stroud wasn’t exactly unstoppable in the red zone in the way that James would likely be. The only effective receiver near James’s height was 6-foot-8 Harold Carmichael, who made four Pro Bowls for the Eagles from 1971 to 1983. James, though, outweighs him by at least 25 pounds.

What about all those basketball players who became top receivers, you ask? Well, they’re nowhere near as big as James; many3 have the bodies of players who would suit up at shooting guard or as an undersize small forward in the NBA. Antonio Gates is 6-foot-4. Tony Gonzalez, the greatest tight end of all time, is 6-foot-5. Rickey Dudley, who, like Gonzalez, was a first-round pick of the Raiders and a college basketball player, was 6-foot-6. The closest comparison for James is likely Jimmy Graham, who is 6-foot-7 and 260 pounds. Graham is a very good receiver, but he also plays with Drew Brees, which helps eliminate some of his rawness. And that two inches (if we go with the 6-foot-9 estimate for James) might not sound like much, but if it weren’t a big deal, why hasn’t there been a single player taller4 than 6-foot-7 to emerge as a viable receiver since Ronald Reagan became president? It’s rare to find an athlete sized like LeBron, but wouldn’t one have come through and played professional football by now?

And would LeBron be that devastating of a threat in the red zone? Well, actually, the answer to that question is probably yes. It’s difficult to gauge red zone production, but I went back and charted the totals for every receiver who had 30 targets or more in the red zone from 2008 to 2012. The receiver who turned the highest percentage of those targets into touchdowns was … Visanthe Shiancoe! OK, maybe Shiancoe isn’t exactly a LeBronesque athlete, but the list is dominated by tight ends, many of whom are considered to be among the league’s best athletes:

The presence of Vernon Davis on that list is interesting. The 6-foot-3, 250-pound Davis was regarded as one of the most athletic players to enter the league in a long time, thanks to his 4.38 40-yard dash. Since then, Davis hasn’t really been a dominant receiver; he has averaged a 55-715-7 line over the past five seasons.5 Davis has instead developed into a world-class blocker. That would be another key question for James as a tight end; he would have the physical capabilities to become an excellent blocker, but would he be able to develop the technique to do so while entering the league in his late twenties? If not, his presence on the field would scream “passing play” to the opposition, limiting his effectiveness.

The other basis for James’s purported dominance as a receiver in the NFL stretches back to his high school days, when he posted a 42-752-11 line as a 6-foot-6 sophomore and then a Gronkowskian 57-1,160-16 line as a junior before giving up football. I’m not going to front like I can translate Ohio high school football statistics into anything meaningful, but what do those numbers and that performance mean? If James had given up basketball and stuck with football, he surely would have been recruited to any of his choice of notable college football programs. At a top-level school, those high school numbers are likely par for the course, and plenty of guys wash out at the college level.

In high school, James’s ridiculous athleticism likely stood out above the competition more so than it would in college or at the professional level. His high school defensive coordinator, former Packers safety Mark Murphy, noted in a 2009 article that the only receivers he had ever seen who were better than James were James Lofton, Jerry Rice, and Steve Largent. Maybe that’s true, but it seems far more likely that Murphy is spouting more hype than honestly saying that a high school receiver would have been the fourth-best receiver in the NFL during Murphy’s time in the league. I don’t doubt Murphy’s knowledge of the game, but a high school kid also isn’t going to step in and become a Pro Bowl wideout. The amount of development that goes on during college and during a player’s early NFL years, even for an athlete as gifted as James, is such that it would be impossible to make that sort of jump. Consider how many of the game’s top receivers struggled during their rookie seasons: The likes of Calvin Johnson, Larry Fitzgerald, and Julio Jones had disappointing campaigns when they debuted in the NFL, and that was after dominating in college. That lost developmental time would be a huge hindrance for James, and he wouldn’t be able to make it up without a time machine. Also see: Jordan, Michael.6

So, the case for James as a tight end has a few holes. I think there’s a possibility that he could become a receiver and instantly become a star in the vein of Jimmy Graham, and he could be a terrifying weapon as a move tight end taking 15 snaps a game on obvious passing downs, but there’s also a very decent chance that he would struggle to stay healthy or be too raw to dominate on a consistent basis. There is a position, though, where I think James could step in immediately and become a star: pass rusher.

In many ways, suiting up as a 4-3 defensive end7 would let many more of James’s strengths play up. Instead of relying on his good-but-not-great downfield speed as a tight end,8 James would be able to employ his first step and agility to get past opposing offensive linemen, in much the same way that he creates space when he drives the lane. His enormous strides would allow him to get around blockers and beat them to the proverbial spot, which would create easy paths to quarterbacks. Teams would have no hope chipping him with all but the sturdiest of running backs. If LeBron doesn’t get to the passer, that huge frame and 84-inch wingspan9 would knock down all kinds of passes at the line of scrimmage. And as a 4-3 defensive end, he wouldn’t need to know anywhere near as much of the playbook as he would as a tight end. He could step in and attack quarterbacks from day one.

Furthermore, there are plenty of players who have succeeded up front with LeBronesque features. The most recent candidate is Julius Peppers, who played football and basketball at UNC and is listed at 6-foot-6 and 283 pounds. That’s still a little too short to match up with James, but there are plenty of players who carved out notable careers on the defensive line at 6-foot-8 and above, including Too Tall Jones, John Matuszak, Dennis Harrison, Mike Fox, and, most recently, Calais Campbell. LeBron’s ankles might still be at risk, but he wouldn’t be subject to the sort of full-speed attacks at his lower extremities that he would get as a receiver. The only disadvantage is that James has experience playing receiver from high school that might go to waste, but how much does his experience catching lobs over 5-foot-10 kids really matter at the professional level?

Well, wait. There’s no reason we have to let that tiny bit of experience slip away. If an NFL team really wanted to get the most out of LeBron and didn’t care about having him play a traditional position, the best thing they could do is use him in a hybrid, highly specialized role. On offense, use LeBron as a tight end inside the red zone, where he can use his size to box out and jump over defenders. On defense, use him as a pass rusher on third downs, where he can terrify opposing quarterbacks, burst past overmatched tackles, and bat down anything in his vicinity. If an NFL team employed James with that unique usage pattern, I think it could get excellent production while limiting the risk of James getting hurt and minimizing the development time he would need to succeed.