30 Thoughts About the WWE ‘Royal Rumble’ 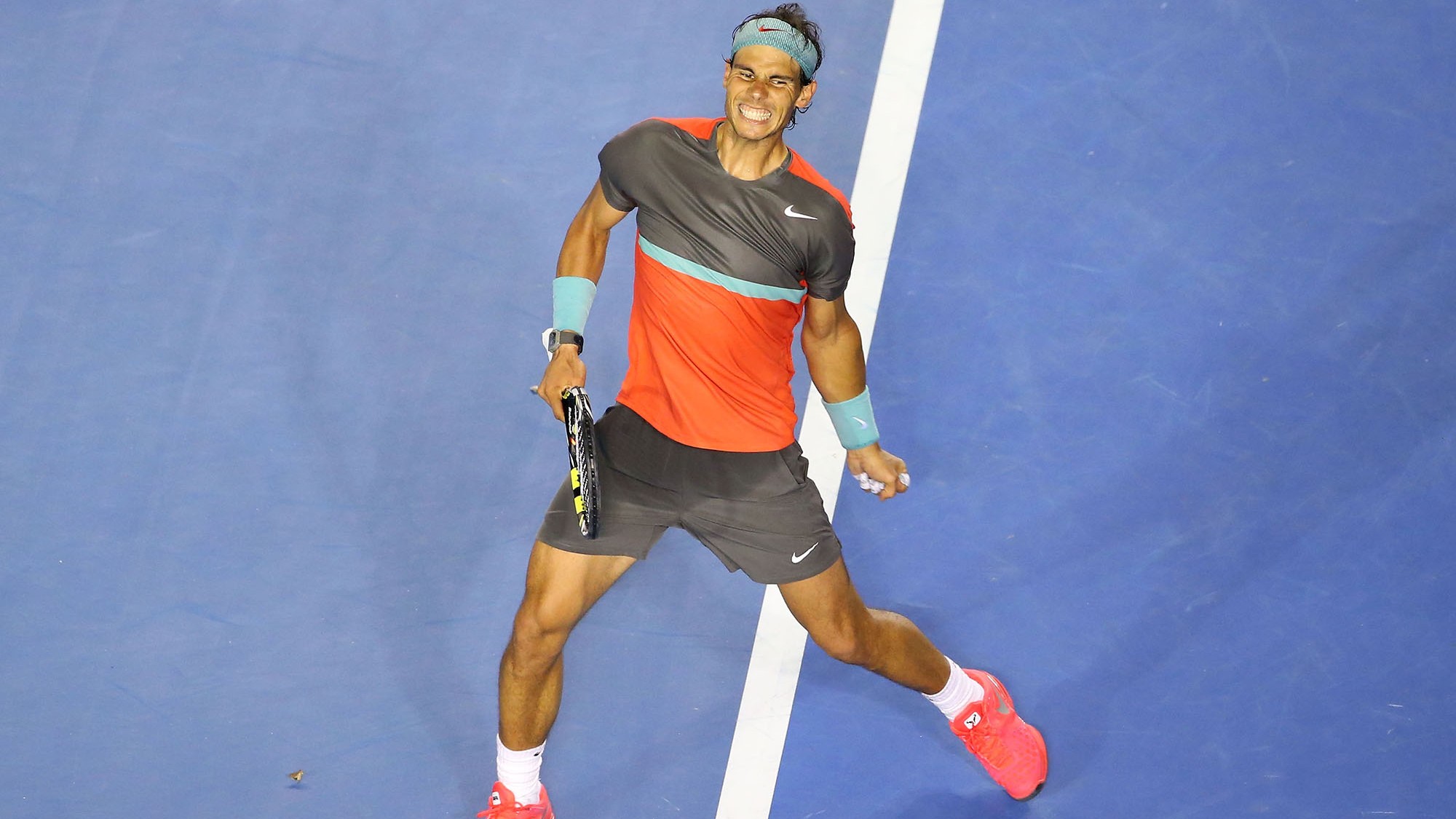 Federer-Nadal XXXIII, otherwise known as the semifinals of the Australian Open, was the promise of stability in a world of chaos. Serena Williams had lost. Victoria Azarenka had been humiliated. Maria Sharapova was out. Novak Djokovic had lost — to a Swiss named Stanislas, not Roger. Earlier in the tournament, it had been 110 degrees on the court on TV and -2 degrees outside when I opened my door. So alarms were set, predictions made.

Really, you knew who would win. Warriors kill artists, left over right, forehand takes backhand, effort beats ease, will trumps grace, the young devour the old. Nadal entered the match leading the head-to-head, 22-10. He hadn’t lost to Federer in a major since 2007. He was the no. 1 player in the world. He was coming off of one of the best years of his career — and Federer was coming off of one of the worst. Federer had won only one of the last nine sets the two had played.

Still, there were signs that this match could be different. In the quarters, Nadal had been pushed around by Grigor Dimitrov, whose game bears such an uncanny resemblance to Federer’s that he used to be called Baby Fed; Nadal was lucky to escape. Plus, there was Blistergate. Nadal had a disgusting bloody crater in the middle of his left hand, which the good folks of ESPN had the kindness to show us XLVII times. When he served, Nadal said, he was afraid his racket would fly out of his grip.

Meanwhile, Federer had been playing with his old magic. Against Jo-Wilfried Tsonga in the fourth round, and except in a few key moments against Andy Murray in the quarters, he had moved with that familiar lightness. The movement of his feet was what impressed, the play of those cherry-red sneakers against the blue, blue court. They touched the ground only to leave it. His footwork was agile and decisive, carrying him toward the ball and letting him hit through with control, power, and invention. He stood at the baseline and took deep shots almost as half-volleys. And when a shorter ball came, he took his chances and flew forward, finishing an astonishing number of points crisply at the net. He had his new coach, Stefan Edberg, as smooth and sleek as a rabbit’s foot, up there in his box. Last year had been a horrible, no good, very bad year — but 2014 had begun. Federer was healthy now. The back felt good; the fitness was there; the feet were fast. He was comfortable with the new racket, and it gave him a little more power at a stretch. The stumble against Lleyton Hewitt earlier in the year was behind him. He was confident.

The first set was reassuringly good, rackets whipping on both sides. Federer played with impressive intent. Nadal pounded Federer’s backhand — but, while a weapon, it wasn’t hurting Federer too much. The first set featured both quick winners and long rallies, including 23 rallies of 10 or more shots — one went 34. The set went to a tiebreak, and Nadal immediately asserted control.

Starting with his serve, Nadal relentlessly hammered Federer. He won the set, and it wasn’t long before the end seemed close. Nadal was in control, moving Federer at will, controlling and dictating the points. He hit the ball with so much spin that it seemed to bite the air, diving down and then jumping around Federer’s shoulders. Federer’s backhand grew weaker. His forehand started to break down. He became passive. The feet quieted, and gravity took hold. A few of his errors were ugly, shots pushed pointlessly and so sailing wide. He grew frustrated and showed it. He complained to the umpire about Nadal’s grunting. “It hasn’t been something new,” the umpire said — as if Federer hadn’t played Rafa 32 times before! Roger retreated. The intelligent aggression dissipated and the mindless aggression set in. He started hitting approach shots when the time wasn’t right, and to Rafa’s forehand, and Rafa would respond with a whirling, dipping pass. Nadal had taken his game from him, and with it his ability to play within himself.

But Federer didn’t lose this match. Nadal won it. Nadal was simply … Nadal. He hit the shots that only he could hit, punishing the ball in ever-new ways, discovering spherical geometries. Every one of his shots was imprinted with his drive, heavy with his insane effort. He plays a bizarre kind of tennis, all to produce the expected result. But Nadal is the best right now, maybe ever. He took Fedal and yet again crushed it.

This doesn’t mean that Federer won’t rebound. He had a remarkable tournament, and he has so much to take away and to build on. Maybe by the time Wimbledon comes, he will have settled into his new game and will be able to play three-out-of-five-set matches for seven rounds with consistent skill. It’s a process.

Ana Ivanovic says “it’s a process” like it’s a mantra. It’s become kind of a joke: the sunny Serb, sitting at a press conference after another disappointing loss, insisting that she’s turning things around. “Still it’s a process,” she’ll repeat. Once, Ivanovic was no. 1 in the world and the French Open champion. When her forehand struck the ball, the air around her almost rippled with joy. Then she was injured, her serve fell apart, and her game followed. Regaining her confidence in her serve has been a process. Finding the right coaching team has been a process. Rediscovering that joy has been a process.

It was easy to laugh about the process until Ivanovic played Serena Williams during the fourth round in Melbourne, and the process produced a 4-6, 6-3, 6-3 win. It was a shock — to Ivanovic, too, by the look of her face afterward. But Ivanovic didn’t do it by doing the unexpected. She did it with her forehand — hitting 20 forehand winners to Serena’s two! And she did it by reading her opponent’s weakness. Serena was clearly hampered, her footwork stumbling. She was having trouble rotating on her backhand and using the full strength of her core on her serve. It would turn out that she was suffering from a back injury. So Ivanovic played like Nadal against Federer and attacked Williams’s backhand. Where others backed way up, she stepped inside the baseline to return Serena’s serves. Ivanovic played like a Grand Slam champion, a former no. 1 in the world.

And then, in the next round, she was upset, by a teenager named Genie Bouchard. It’s a process.

Most top players are capable of sublimity. It doesn’t usually happen. Ana Ivanovic double-faults when it counts. The diminutive Dominika Cibulkova has trouble closing matches. Li Na trips and falls.

But when a player plays her game, it is special. There is more pleasure than incredulity in those upsets. The best set of tennis I’ve seen all tournament — among the best sets of tennis I’ve ever seen — was the third set that Agnieszka Radwanska played against Azarenka in the quarters. Radwanska had lost 10 of their last 11 matches. She is one of the top players, a Wimbledon finalist, but she’s slight, with an attackable second serve. The stronger, bigger girls sometimes hit her off the court. Against Azarenka, though, she was perfect. 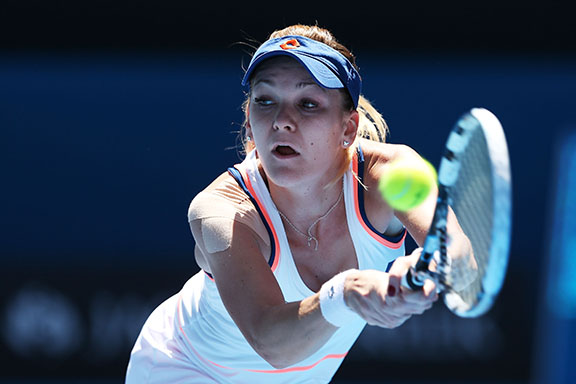 Her name is Agnieszka Radwanska, but don’t worry. Call her Aga. Call her a magician, a sorcerer, a ninja. She anticipated Azarenka’s every shot, often moving before Vika hit the ball. She collected balls that seemed past her and flicked them over the net. She hit delicate drop shots that hardly bounced. She might not generate much power of her own, but she can redirect pace, taking the ball off the bounce so early that she often hits from a squat. She flicked lobs that made everyone who saw them gasp and smile — except her (she never smiles) and Azarenka. Watch the highlights. Trust me. Really. Radwanska won that set 6-0.

And then Aga, like Ivanovic, lost in the next round, to Cibulkova — who played her own game to perfection, throwing her small body into her heavy shots.

The process is long. You have to be patient. You have to understand that you don’t know where it might lead. We’re accustomed to thinking the key to winning is total self-belief — that a player wins because she assumes she will. But maybe that doesn’t have to be the case. “I didn’t expect to make the final. I didn’t came here like thinking, Oh, maybe it will be amazing to make final,” Wawrinka said after beating Tomas Berdych in the semis. “For me, I was really far from that … As I always say, I always try to improve, I always try to win every matches, I always go on court to try to beat my opponent, and that’s what I did during all the tournament here.” That’s what courage is.

Wawrinka is in the final this weekend. On Monday, he’ll become the top-ranked Swiss. This isn’t, actually, chaos. It’s not upsetting. This is his game now. This is where he is.

He will be playing Nadal. Not only has Wawrinka never won a match against Rafa, he’s never won a single set. He has the kind of gorgeous one-handed backhand that Nadal thrives on. His chances aren’t good. But life is strange. Stan will try. He will play with courage. What more can we ask of him? What better thing can he ask of himself?