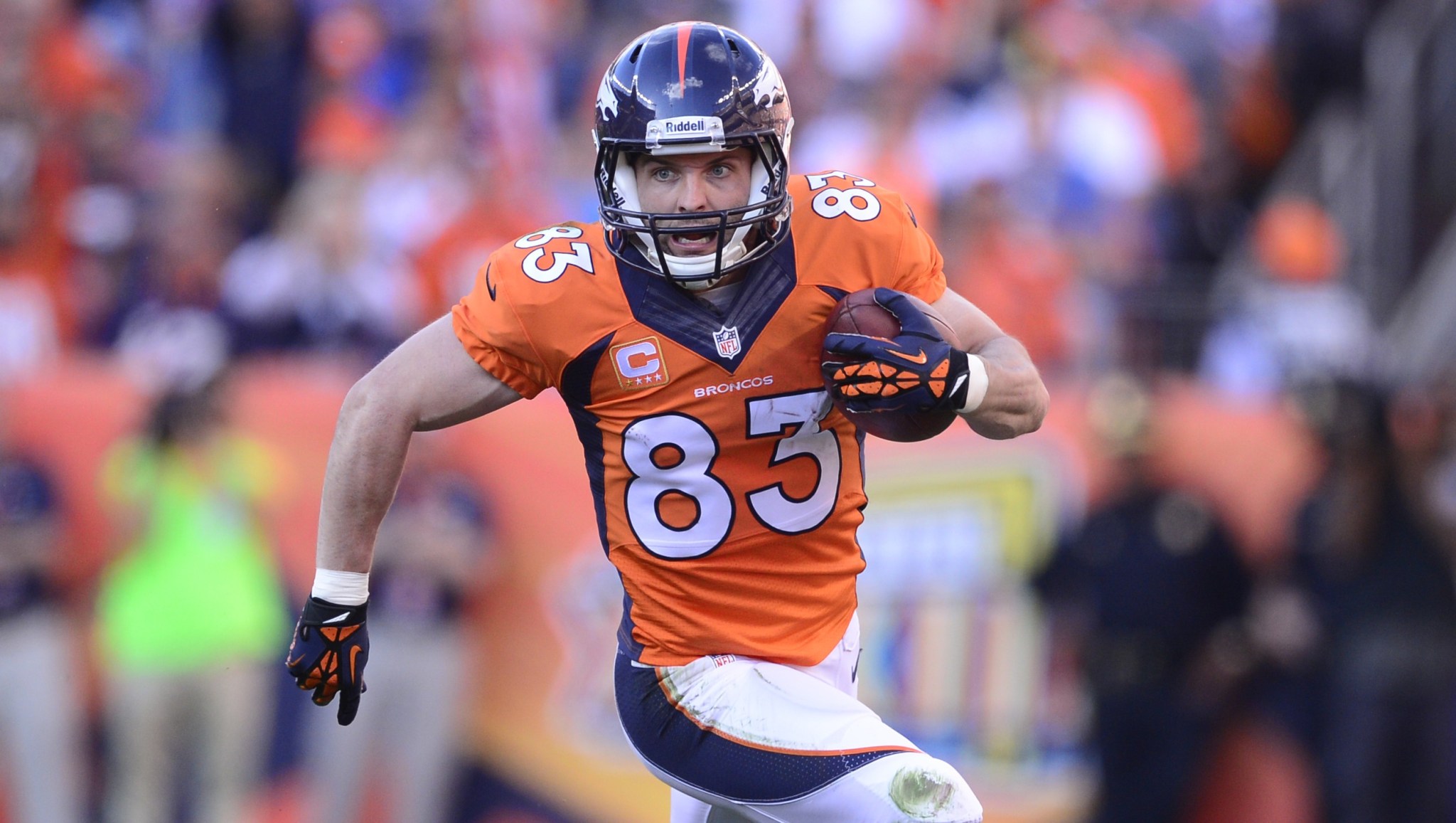 You’re underrating the Denver Broncos’ offense. Yes, you. I don’t care who you are. You might be someone who considers orange to be a primary color, invited Steve Atwater to your wedding, and has been stuck with dogs named Cutler and Tebow for years now. You, die-hard Broncos fan, are probably underestimating just how good Denver’s offense really is. On Sunday, you will be watching the final game from what very well might be the best offense in NFL history.

The only problem, Denver fans, is that you might also be watching them play one of the best defenses in NFL history, too.

First, let’s start with these Broncos. All it takes is a look at the history books to find that the Broncos have one of the most productive offenses ever. Denver scored 606 points1 this year, making it the founding member of the NFL’s 600 Club. No other team is within 16 points of that total. At 37.9 points per game, the Broncos averaged more points per contest than any team since Peyton Manning’s rookie year of 1950, when the Rams and Norm Van Brocklin averaged 38.8 points per game. If you want to say they’re merely the best post-Truman offense, that seems OK, too.

The problem with those raw numbers is that we’re playing in an era of particularly high scoring. NFL teams averaged 23.4 points per game this season, more than any other year in league history. And when you look at the list of teams with the most points in a single season, four of the top six seasons belong to teams from 2011 (the Packers and Saints), 2012 (Patriots), or 2013. Those were great offenses, but the best way to judge an offense is by what it did in relation to its peers. We can’t send Van Brocklin & Co. forward 63 years in time, but by measuring how much better they were than the other offenses in football during the 1950 campaign, and running the same checks for every other team since 1940, we can put their performance in context and ship that to 2013. And that will give us the best idea of where these Broncos stand historically.

As mentioned earlier, the Broncos scored more points than anybody else in football this year. There are some years when somebody just happens to finish first among a group of three or four teams that all roughly perform at the same level. In 2005, for example, just 13 points separated the first- (Seattle, 452) and second-ranked offenses (Indianapolis, 439) in the league, with three more teams within 21 points of Indy. I don’t think Seattle’s offense was appreciably better than Indianapolis’s that year, despite the fact that it finished first, given that the difference between the two teams amounts to less than one point per game.

That’s not quite the case with the 2013 Broncos, who are just a tiny bit further ahead of the pack. Denver’s offense scored, as mentioned earlier, 606 points. Just behind it, in second place, were the Chicago Bears, who scored … 445 points. That’s absurd. How absurd? You pick a reason!

1. Denver could have stopped scoring after its 35-28 win against the Chiefs in Week 13 and spent the final four weeks of the regular season delivering pizzas, and it still would have led the league in scoring by 19 points.

2. Manning & Co. had as many 50-point games (three) as the rest of the league combined.

4. Those Bears averaged 27.8 points per game, 10.1 points per contest away from Denver. They were closer to the 30th-ranked offense of Tampa Bay (18.0 points per game) than they were to Denver.

It’s not really accurate to say the Broncos led the NFL in scoring. Denver was really in its own universe, and then there were 31 other teams playing football.

A better way to measure the difference between the Broncos and the rest of the league is by expressing their point total as a standard score, which measures how many standard deviations a given data point is over or under the average of all the data points in the sample. Here’s a chart of the standardized scores for each team’s point total in 2013, thanks to Grantland charting don Kirk Goldsberry.

And the cool thing, of course, is that you can use standard score to contextualize every single team’s performance against the rest of its league and use that to compare teams across eras. As it turns out, there are three other offenses since 1940 that have been three standard deviations above the mean. None of them can match up with the Broncos, whose standard score suggests they have the best offense in the history of the National Football League. Here are the best offenses in NFL history by standard score and what their numbers would translate to in the 16-game offensive environment of 2013:

This is a much more representative list of great offenses. A team like the 1993-94 49ers, who dominated in an era when teams only averaged 19.5 points per game, is rightly bumped up the charts despite an inferior raw amount of points scored. It’s still almost exclusively focused on teams from the past 20 years — there are a few golden oldies that show up in the next 10 teams, the aforementioned 1950 Rams among them — which I’m guessing is closely linked to the fact that most of these teams were built around a dominant passing game.3 The easiest way to lap the league is to throw the ball really, really well.

Is there a reason to think that standard score might overrate the 2013 Broncos? As it turns out, there’s one really obvious factor. Scoring offense doesn’t account for a bunch of things,4 but the simplest missing component is the quality of the opposition. And while the Denver offense made everyone in its path look helpless this year, those defenses were pretty bad when the Broncos weren’t on the field, too; Denver faced the league’s third-easiest slate of defenses this year, with only Washington and Kansas City enjoying easier paths to the end zone.

The bad news is that we don’t have strength-of-schedule data for each offense going back to 1940. The good news is that most of the teams in our top 10 have come into play over the past 25 years, and DVOA — a better metric than points scored or the resulting standard score — also happens to exist over that time frame. DVOA compares a team’s performance to the average after adjusting for the down, distance, game situation, and, crucially, the quality of opposition.

DVOA doesn’t suddenly turn the Broncos into a mediocre offense, obviously, but it does take some of the wind out of Denver’s sails. The Broncos still posted the league’s best offensive DVOA this year at 33.7 percent, but second-place San Diego is closer to Denver than it is to seventh-place Philadelphia. And in terms of their placement atop history, the Broncos won’t enjoy what DVOA has to say; while the metric only goes back through the 1989 campaign, it suggests that the 2013 Broncos are the sixth-best offense of the past quarter century.

The 2007 Patriots finish atop the DVOA rankings, suggesting that the 16-0 Tom Brady offense was the best attack on a play-by-play basis over the time frame in question. Denver’s offense, according to standard score and scoring offense, rates out as the best total offense in any season. In either case, we’re probably splitting hairs here; if the 2013 Broncos aren’t the best offense in league history, they’re almost surely somewhere in the top five. It’s the best attack Peyton Manning’s ever led, and quite possibly the most fearsome scoring machine you’ve ever seen.

The Broncos won’t be up against any average defense on Sunday, either. The Seahawks’ defense didn’t receive the same number of accolades or set records the same way the Denver offense did in 2013, but it’s not exactly lacking for impressive performances. Seattle allowed a league-low 231 points this year, with opposing teams scoring just 14.4 points per game against Richard Sherman & Co. That’s a good number any year, but it looks even better in the context of the highest-scoring season in league history; Seattle sliced nine points per game off the average offense’s output this year. It led the league in defensive DVOA, Simple Rating System, and AdvancedNFLStats’s Team Efficiency.

We can put Seattle’s performance into context the same way in which we analyzed the Broncos’ offense to see where the Seahawks stack up historically. Using the same methodology as before,5 the numbers suggest that the Seahawks were 2.2 standard deviations below6 the mean. That’s not quite as ridiculous as Denver’s 2013 season, but it still manages to pop up as one of the most impressive defensive campaigns of all time. Here are the top 10 defensive performances in NFL history by standard score, and what their numbers would translate to in 2013:

• The 2006 Ravens? Yeah, they were better than you remember. They held opposing teams to 12.6 points per game in a league where the average team allowed 20.7 points per contest. They went 13-3, but lost in the playoffs to the eventual Super Bowl champion Colts without allowing a touchdown; Indy won 15-6 in a game where it recovered all five of the fumbles that hit the ground and picked off Steve McNair twice in the red zone. Baltimore sent six players to the Pro Bowl that year, including each of their four starting linebackers.

• The 1995 Chiefs, believe it or not, lost their first playoff game to the Colts in a 10-7 affair, with Indianapolis recovering all five of the game’s fumbles.

• The 1970 Vikings are the classic example of a team that needs to be adjusted for the context in which it played. They were awesome — you don’t hold teams to just over 10 points without being pretty incredible — but they were playing in a league where the average team scored 19.3 points per game. They also lost in their first playoff game despite holding the best offense in football (San Francisco) to 17 points and producing a defensive touchdown on a fumble return.

• The best defense in the history of football over a multiyear stretch, it seems pretty clear, are those mid-’80s Bears teams. None of these defenses were flukes, but putting three teams in the top 10 is fairly staggering.

• The 2013 Panthers defense finished with the 20th-best standard score in league history.

I have to admit I was a little surprised at just how well Seattle’s defense ranks historically; I knew they were the best defense in football, but I didn’t realize they were quite this good.

Just as is the case with the Broncos, DVOA reveals a bit more about the Seahawks. The Seahawks’ raw numbers are also inflated some by their slate of opponents, as Seattle had the second-easiest schedule of opposing offenses in football. Even after factoring that in, the Seahawks’ defense posted the seventh-best DVOA since 1989. Factor in Seattle’s performance on offense and special teams, and the 40.1 percent total DVOA the Seahawks posted across all facets of the game leaves them as the fifth-best team of the past 25 years. Denver’s below-average defense pushes its overall performance out of the top 10.

So, the numbers suggest we’re looking at perhaps the best offense of all time versus one of the 10 best defenses of all time. That’s pretty exciting! Does it mean the Broncos are likely to outperform the Seahawks when they have the ball on Sunday? Not necessarily: Games aren’t played on paper. I’m not saying that as a dumb anti-stat cliché, but instead to point out that the numbers don’t account for the variance of a single game and the unique matchups that come into play when you pit 22 men against each other for 70 snaps. There are schematic concerns and contextual issues that might very well materially affect the way these two teams look and play during the Super Bowl. In any case, given the high stakes and the incredible performance of both these teams on their respective sides of the ball, we’re going to enjoy what is probably the most titanic battle in league history when Peyton Manning is on the field this Sunday.